A massive storm crashed into the Gulf Coast late Friday into early Saturday, dropping up to 11 inches of rain in a short time and flooding streets – with police sweeping in for dramatic rescues of cars that were suddenly marooned.

Tropical Storm Claudette is expected to thrash across the Southeastern U.S. throughout the weekend – carrying with it threats of flooding, rip currents and dangerous winds, according to the National Weather Service.

Up to 15 inches of rain is possible in some parts of the region through Sunday, the Weather Service said.

‘The water came up so fast last night,’ a Slidell Police Department spokesperson told NOLA.com. ‘A lot of people were out on the road.’

A woman in labor was left stranded on her way to the hospital as police were forced to rescue 50 to 60 cars from Louisiana floods as the storm hit land. Houses also got flooded, though officials said it wasn’t clear how many.

The pregnant woman was heading to Slidell Memorial Hospital in Slidell, Louisiana, near New Orleans, possibly going into labor when she became trapped by flood water along the roadways, according to a Facebook post from the Slidell Police Department.

The woman was among multiple people authorities pulled from flooded cars along the city’s major thoroughfare Friday night and into Saturday morning.

No major injuries were reported but authorities urged people to exercise caution when driving through neighborhoods as floodwater, debris and downed trees were scattered around. 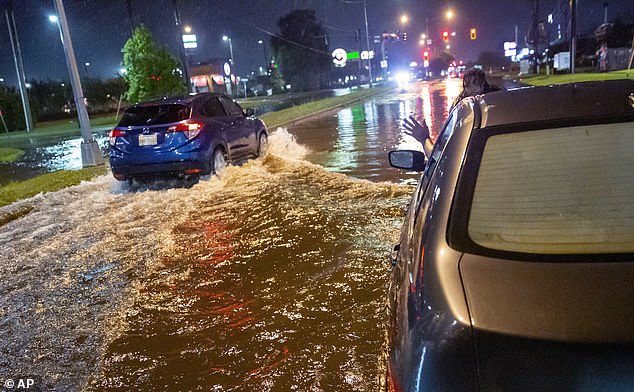 A woman in labor was left stranded on her way to hospital as police were forced to rescue 50 cars from the Louisiana floods, according to the Slidell Police Department 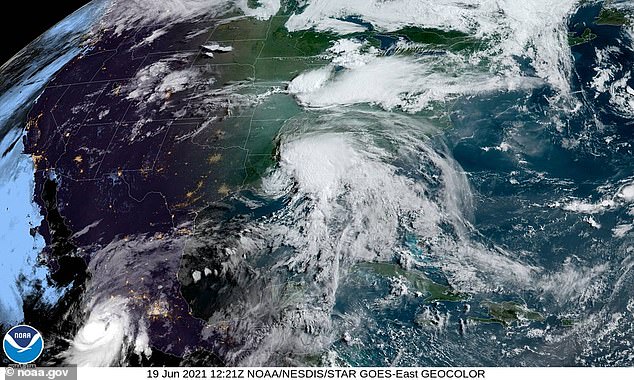 Heavy rain was dumped across coastal areas of Louisiana, Mississippi and Alabama as Claudette became both powerful and organized enough for the National Hurricane Center to declare it a named storm at 4 am Saturday morning.

Parts of the Gulf Coast were under tropical storm warnings at 7am CT including Grand Isle and New Orleans, Louisiana, Biloxi in Mississippi, Mobile in Alabama and Destin, Florida.

It was north of the city three hours later, with maximum sustained winds of 45 mph (72 kph) as it plodded to the northeast at 12 mph (19 kph).

The heaviest rains were far from the center, near the Mississippi-Alabama state line.

Tornado warnings were issued from the Mississippi coast to the western Florida panhandle.

In Mobile County, Alabama, someone reported storm damage to a fishing pier on Dauphin Island, Alabama, according to Glen Brannan of the county Emergency Management Agency.

He said there were no reports of injuries but warned of a lot of water on the roads. 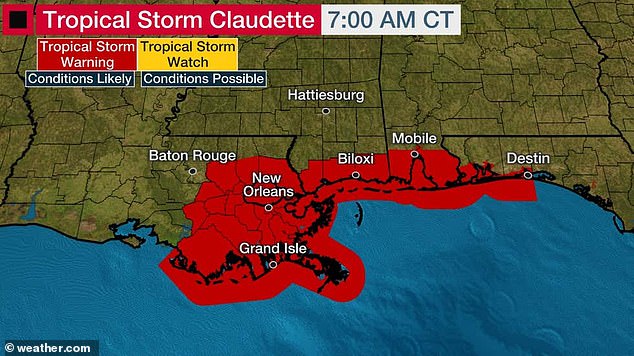 Parts of the Gulf Coast were under tropical storm warnings at 7am CT including Grand Isle and New Orleans, Louisiana, Biloxi in Mississippi, Mobile in Alabama and Destin, Florida 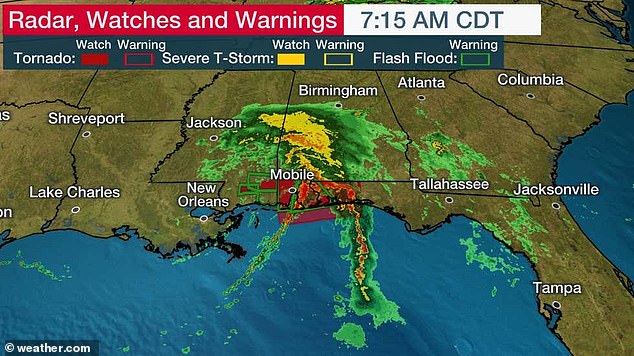 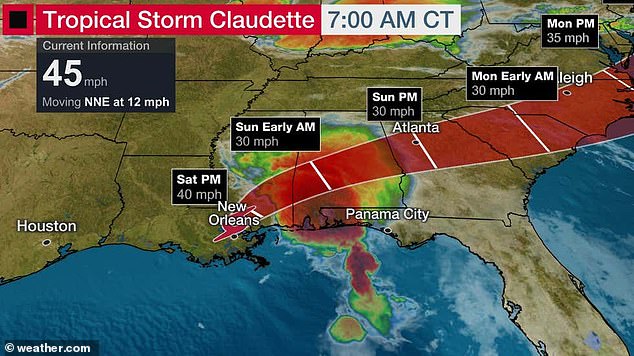 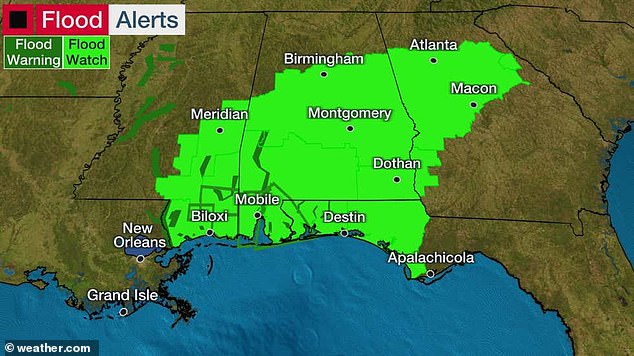 Seven million Americans had been placed under rrain and wind warnings from the Florida Panhandle to Morgan City, Louisiana, Friday.

On Thursday, Louisiana governor John Bel Edwards issued a state of emergency due to the threats and cautioned residents ‘to stay weather aware as these storms approach the coast.’

‘According to the National Weather Service, rainfall will be the biggest threat,’ Edwards said.

‘In addition to heavy rains, there is also a threat of coastal flooding, tropical storm force winds and isolated tornadoes.’ 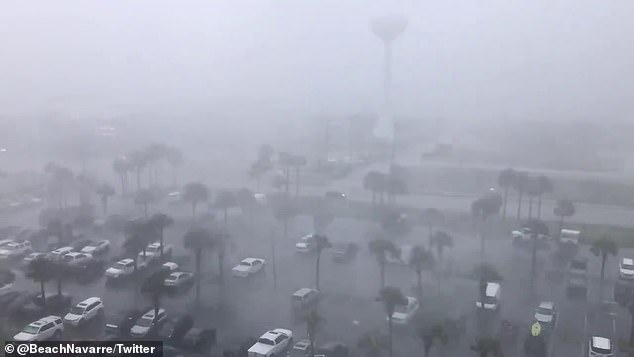 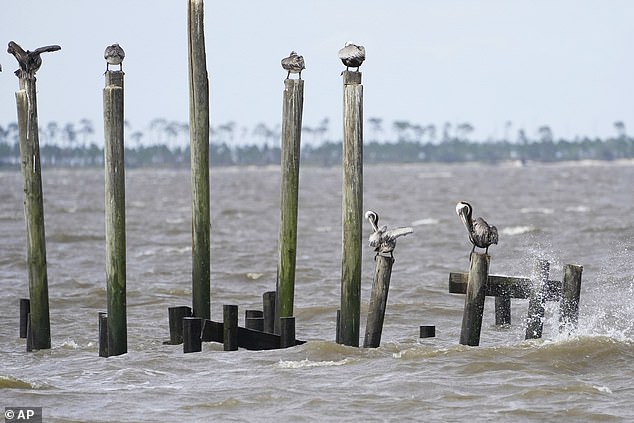 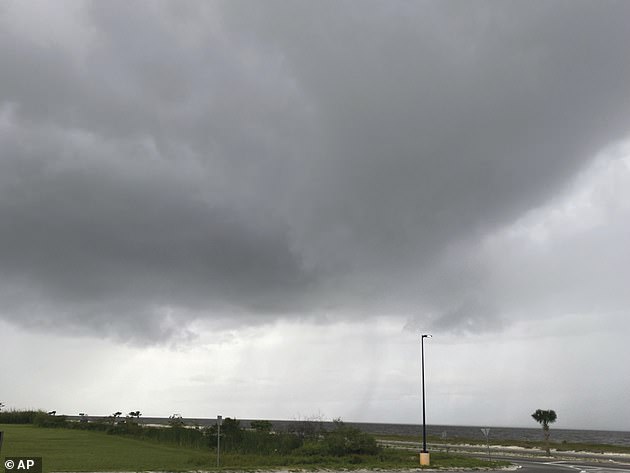 Forecasters said Claudette could now dump 5 to 10 inches of rain along the Gulf Coast, with up 15 inches possible in parts.

Most people riding out the storm still had electricity when they woke Saturday morning.

Claudette is expected to become a tropical depression by early Sunday as its remnants cross Alabama toward Georgia and the Carolinas.

It is then forecast to cross into the Atlantic Ocean off North Carolina on Monday, and regain tropical storm strength over open water Tuesday. 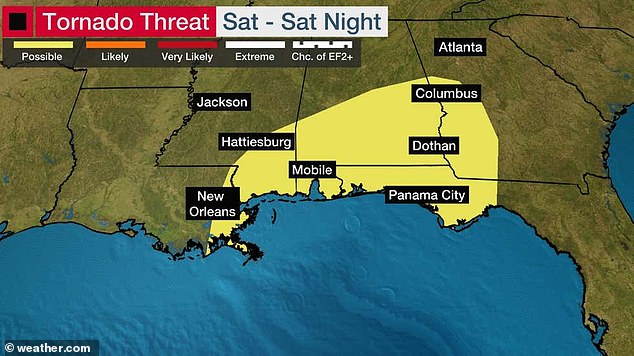 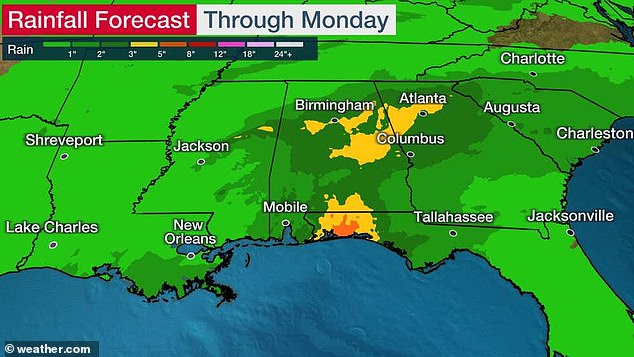 The storm struck on a weekend when many on the Gulf Coast planned to celebrate Juneteenth and Father’s Day, threatening to derail plans for millions of Americans and hammering business owners who were hoping to see an injection of tourism following a hard year amid the pandemic.

‘My biggest concern is that it drives away a busy weekend, and may just end up being a lot of rain,’ Austin Sumrall, the owner and chef at the White Pillars Restaurant and Lounge in Biloxi, Mississippi, said Friday.

He had 170 reservations on his books for Sunday, but was concerned some patrons would cancel.

‘We saw, especially last year, the rug can get jerked out from under you pretty quickly,’ he said.

In Louisiana, the storm came a month after spring storms and flooding that were blamed for five deaths, and as parts of the state continued a slow recovery from a brutal 2020 hurricane season.

That included Tropical Storm Cristobal that opened the season last June, hurricanes Laura and Delta that devastated southwest Louisiana, and Hurricane Zeta that downed trees and knocked out power for days in New Orleans in October. 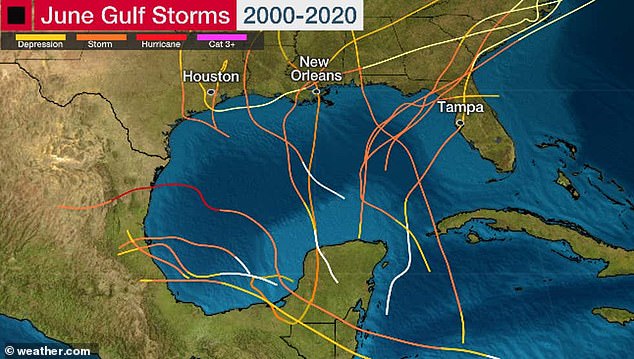 In Louisiana, the storm came a month after spring storms and flooding that were blamed for five deaths, and as parts of the state continued a slow recovery from a brutal 2020 hurricane season