Woman is pregnant with own son’s child

A 56-year-old mother has revealed she is pregnant with her own son’s baby – after her daughter-in-law discovered she was unable to carry a child.

Nancy Hauck, from St. George, Utah, decided to be a surrogate for her son, Jeff Hauck, 32, and his wife, Cambria, 30, after her daughter-in-law had a hysterectomy,  meaning she was unable to carry more children.

Knowing her son loved being a dad, she tentatively offered to be the couple’s surrogate – not thinking it would be possible due to her age.

But the embryo transferred successfully – and the baby is now due in November, with Nancy saying she ‘cannot wait to give birth’.

Nancy, an administrator, said: ‘I never imagined I would be pregnant at 56 or that this would be possible, but it is the most beautiful thing.

Nancy Hauck, 56, from Utah, helped out after her daughter-in-law was left unable to carry a child – and says she can’t wait to give birth to her granddaughter 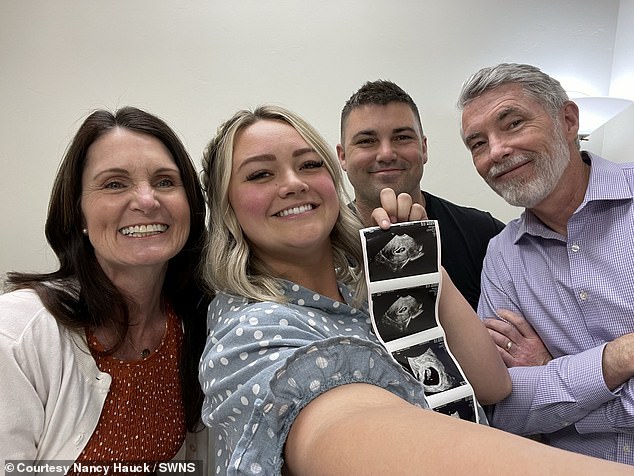 Pictured (L-R) Nancy, Cambria, Jeff, and Jason. The family are delighted that another child will soon be arriving

Nancy decided she wanted to be surrogate for her son Jess and her daughter-in-law Cambria because they had struggled so much with fertility issues.

They couple had IVF for six years before having twins, Vera and Ayva, now three.

They then had another set, Diseal and Luka, now 11 months – but the birth was traumatic and led to Cambria needing a hysterectomy.

But the couple still had more frozen embryos in storage, which they had been hoping to implant. 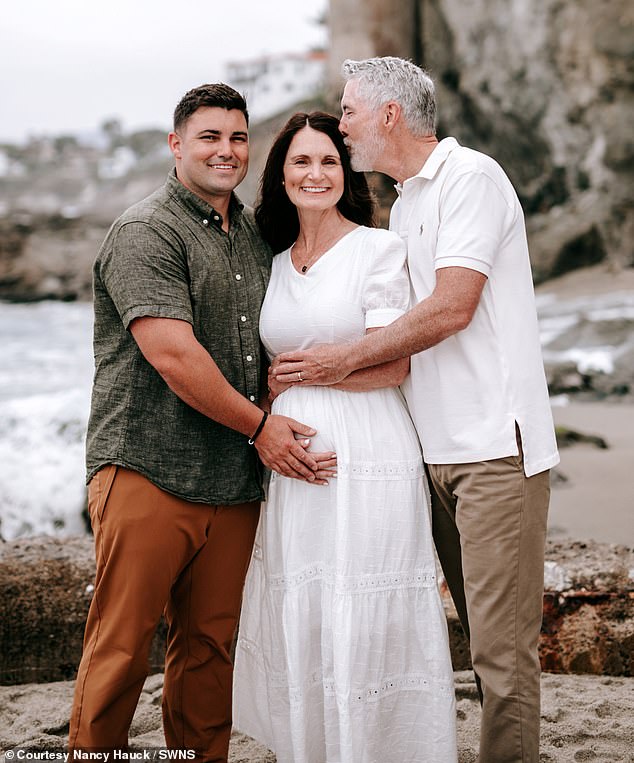 Nancy offered to be a surrogate for her son, Jeff Hauck, 32, and his wife, Cambria, 30, after her daughter-in-law had a hysterectomy following the traumatic birth of their twins.

How does surrogacy work and what are the laws in the UK?

Surrogacy is when a woman carries a baby for a couple who are unable to conceive or carry a child themselves.

Such couples may include those who have suffered recurrent miscarriages, repeated IVF failures, premature menopause or a hysterectomy.

The risks of being a surrogate mother are the same as for every pregnancy, and include nausea, heart burn and back ache.

This involves using the surrogate’s egg and the intended father’s sperm.

It is the least expensive and simplest form of the procedure.

Host surrogacy requires IVF with either the intended mother’s eggs or donor eggs rather than those of the surrogate.

In this case, the surrogate is genetically unrelated to the baby.

Donor eggs can be from friends or relatives, or anonymously donated.

What are the laws?

Surrogacy is legal in the UK, however, it cannot be advertised.

No third parties are allowed to be involved and surrogates can only receive payments to cover expenses incurred as a result of being pregnant.

Nancy said: ‘They’ve had lots of struggles with infertility – but they had seven embryos to try with IVF and decided they wanted to use them all.

“Cambria could no longer carry her own children. And I just had a feeling a few months after that I should offer to do it.

‘I told my son, and he teared up and was shocked – I hadn’t even told my husband at that point, but he was really supportive.’

But despite her offer, none of the family thought it would be possible due to her age.

‘I told my son and Cambria that I was willing but that I thought I would be old.

‘But to my surprise medics said I was healthy and could do it and here I am. 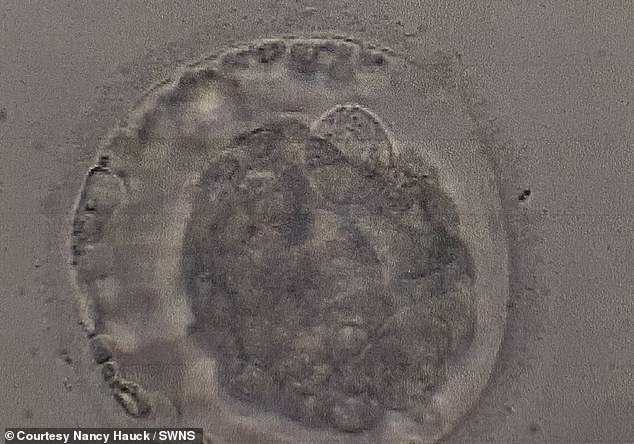 A scan of the embryo, which was transplanted into Nancy after Cambria had an hysterectomy, leaving her unable to carry more children 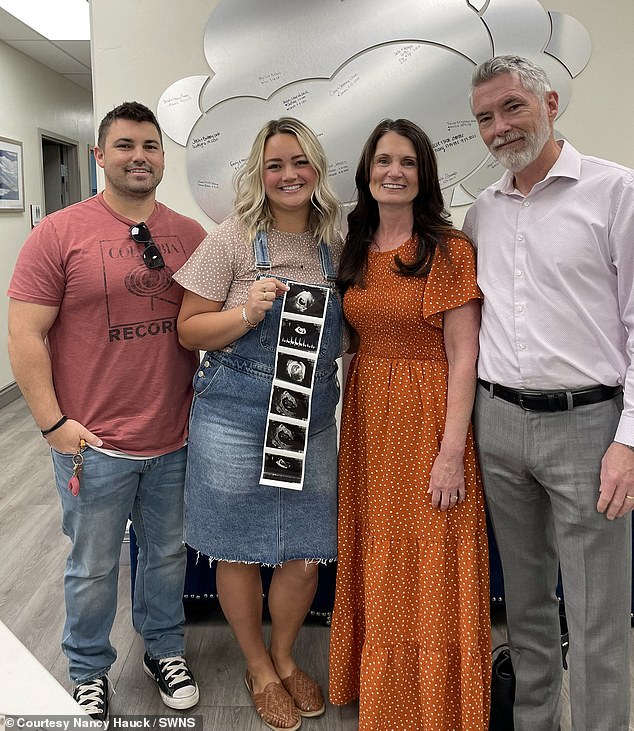 Pictured Jess, Cambria, Nancy and Jason with a scan photo. They will all soon welcome another baby girl into the world

However, they still mentioned the idea to fertility doctors, saying Nancy had previously had five healthy children with no complications.

‘The doctor said I might be able to be a carrier and asked if I wanted to come in for an exam to see if I was viable,’ Nancy said.

‘I was shocked it might actually be an option but still very willing to do it for my son.’

The exam showed Nancy was a viable carrier, but it was likely they needed to act quickly before she went into menopause.

‘I left the choice up to Jeff and Cambria,’ Nancy said.

‘They’d just had their twins, so it was very quick after to have another baby. 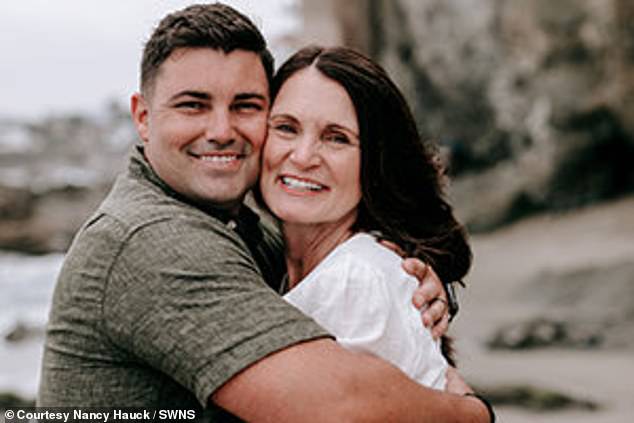 Jeff said what his mother has done has left him in awe of her ‘kindness, love, strength, attitude, wisdom, and dedication’ 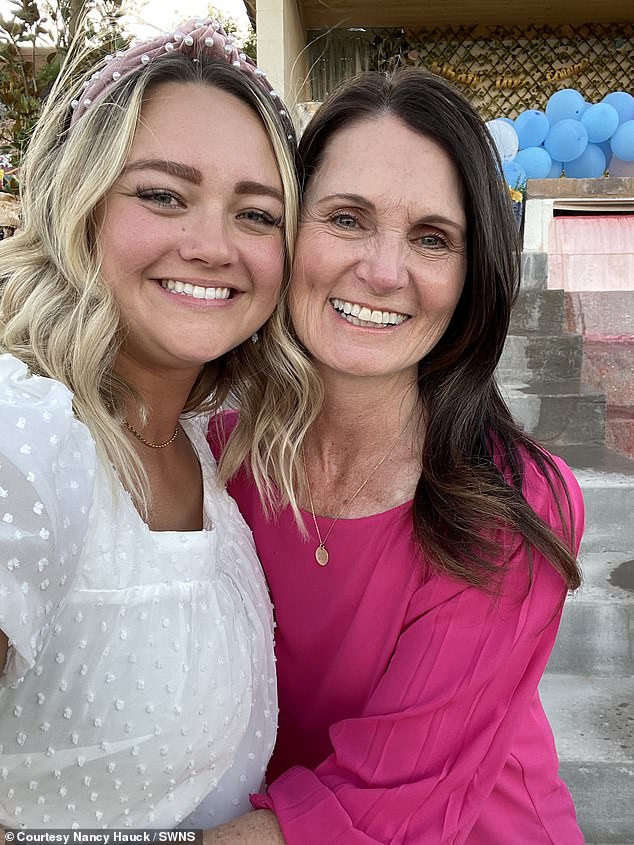 Meanwhile Cambria, 30, has praised her mother-in-law, saying she tries to support her through her scared and happy moments

‘But they decided to go for it.’

Nancy started her hormone treatment in January 2022, injecting herself every day for 12 weeks with the help of her husband and Jeff’s dad, Jason, 59, an optometrist.

The fertilised embryo was then transferred into her uterus in a month later.

And they were all ‘over the moon’ when it worked.

‘I had a feeling just before the blood test that it had worked, and I did a test and it was positive.

‘They were over the moon when we found out for certain I was pregnant.’

Nancy said that the pregnancy has been similar to her other ones, except she has had a bit more sickness.

And she said that while her other children were initially scared for her, they have now come around to the idea. 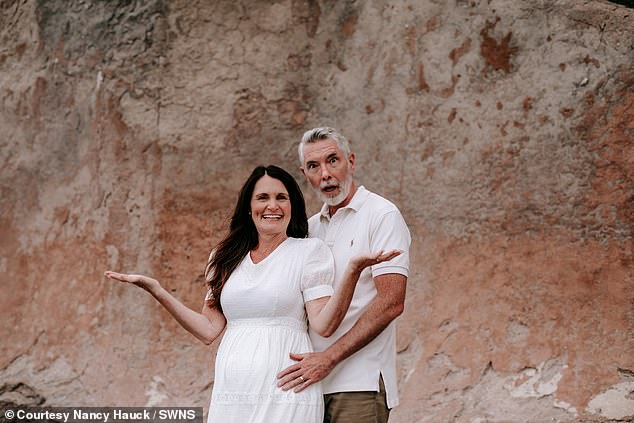 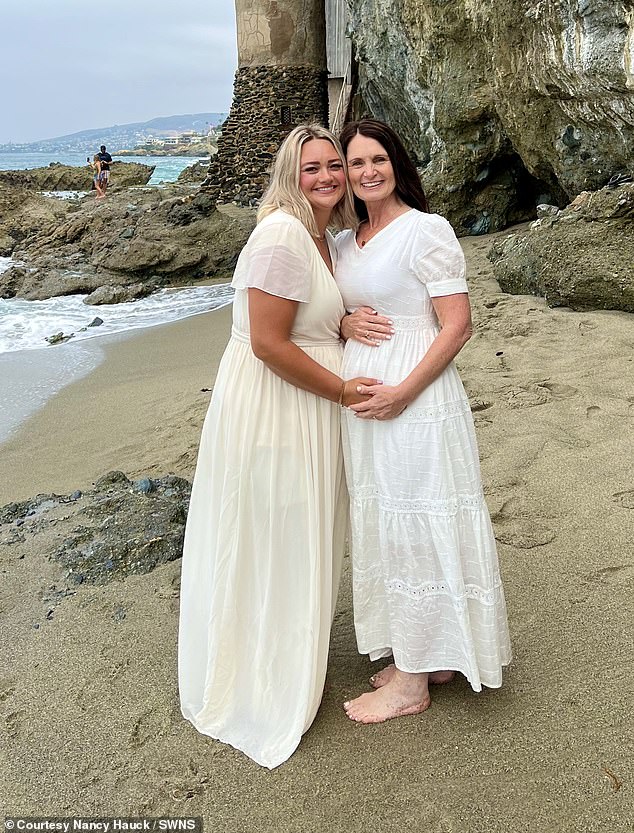 She added: ‘This has all been a big leap of faith. It’s remarkable and a beautiful thing to do. I think this is quite a rare thing to do.

‘I never planned for it, but I am so glad I chose to carry my son’s baby.’

Cambria has been able to go to every appointment with Nancy, and the family were ecstatic to find out they were expecting a girl in May 2022.

Cambria, an owner of a dance studio, said: ‘It is so humbling that Nancy is doing this for us.

‘She is sacrificing so much for us, and our family and we just feel so grateful. It has been so miraculous and beautiful to watch Nancy carry our sweet baby girl.

‘She has been nothing short of amazing and filled with so much light and grace.

‘They say pregnancy comes with a glow, but Nancy’s is a full-on lighthouse.’

She added that she communicates ‘constantly’ with Nancy, sharing both the scared and funny moments.

And she says it has been special to be able to support her. 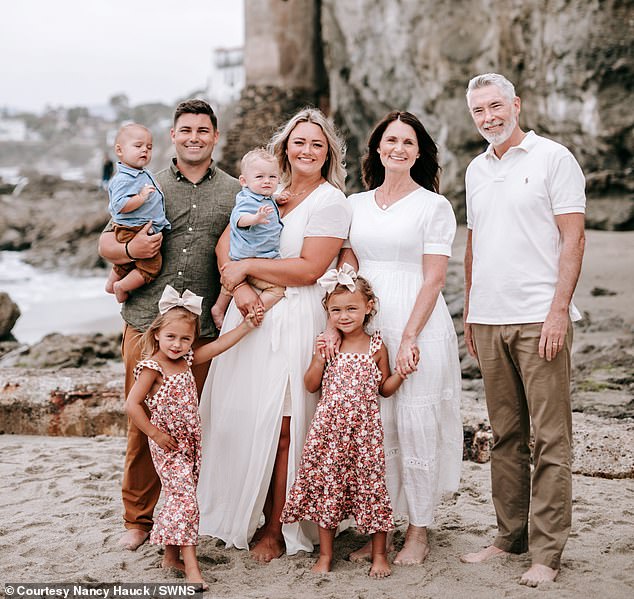 Pictured Jeff and Cambria, Nancy and Jason with three-year-old girls Vera and Ayva, and 11-month-old boys Diseal and Luka 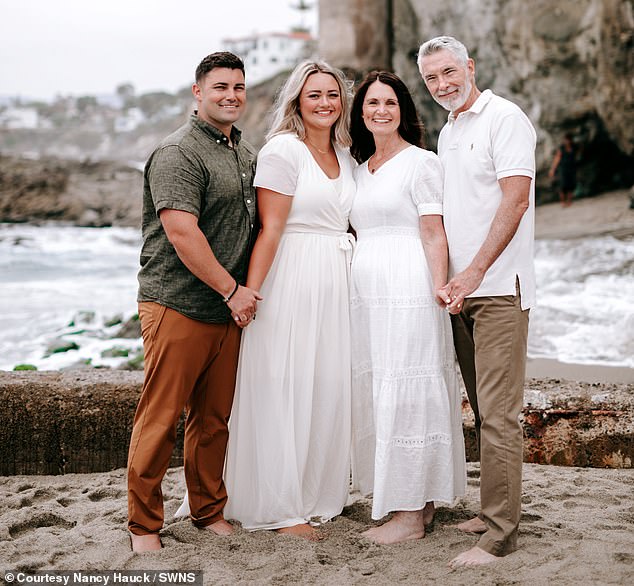 Barefoot in the sand: The family is happy to care for and support one another – even in this unusual journey

She said: ‘I like to give gifts and Nancy is constantly in my thoughts, so when I see something that makes me think of her I get it.

‘I try to make her favourite meals, we beg to give her foot rubs, and just take any opportunity to show our love and gratitude for this miracle she is performing for us.

‘We cannot wait to meet our daughter.’

Nancy’s son Jeff, a computer scientist, said: ‘I felt grateful to have such a selfless and loving mom [who] was willing to make that kind of sacrifice for my family.

‘Having experienced over four years of infertility treatments, I knew how complicated the process can be and doubted that it was possible for her to carrier a baby for us – but I was very moved that she would even offer.

‘The entire journey has left me in awe. I’m in awe of my Mom – her kindness, love, strength, attitude, wisdom, and dedication through this experience has been humbling and beautiful to witness.’

Nancy’s granddaughter is due on November 5 and – all going to plan – will be born with Jason, Jeff and Cambria in the room.

Jeff added: ‘Being a dad has always been my dream, I adore each of my kids and take my role and responsibility as their dad very seriously.

‘The opportunity to be the dad to another beautiful baby girl is the greatest gift and blessing I could receive.

‘There is no repayment for something like that – all I can do is follow the example my parents have set and try to give that same level of love and devotion to my own family and to others.’