A woman whose crippling back pain left her dependent on morphine and unable to work is finally drug-free after wearing a state-of-the-art ankle gadget for just 16 weeks.

Louise Watson, 28, was walking on a cobbled street two years ago when her ankle rolled, causing her to experience agonising pain in her back, pelvis, hip and knee.

With doctors being unsure how best to treat Ms Watson’s discomfort, they ‘threw painkiller, after painkiller’ at her, leaving her nauseous and unable to focus.

On the highest dose of morphine available, Ms Watson was signed off work and had to take four hour naps every day. She even relied on her husband Jason to help her in and out of the bath.

Desperately seeking a solution, Ms Watson, a PR manager, stumbled across a gadget, known as Arc4Health, online, which claims to relieve pain by sending electrical signals to the site of injury.

Within 10 days, Ms Watson started to come off morphine, and was back at work and medication-free 16 weeks on.

She said: ‘I can get in and out of the bath and wash my hair on my own now. I am working again. I can walk the dogs for as long as I like every day and I can tie my shoelaces again.

‘I feel like Jason and mine’s relationship is back on track because I no longer feel like his patient.’

In a piece for Healthista, Ms Watson outlines her back pain and the gadget that finally helped her to overcome it.

Louise Watson, whose crippling back pain left her dependent on morphine and unable to work, is finally drug-free due to 12-weeks of wearing a £200 gadget (pictured with it on her ankle)

WHAT IS MICROCURRENT THERAPY?

In our bodies, every cell communicates with all the others by a series of minute sequences of electrical currents, which regulate the proper functioning of the body.

When disease, injury or stress is present, these currents are compromised, resulting in the impairment of natural healing processes.

Microcurrent Therapy can kick-start and accelerate the many processes involved in correct cellular functioning, resulting in faster healing.

What is the evidence?

A 2001 study published in the American Journal of Pain Management looked at 1,949 patients using Microcurrent Therapy for pain relief.

Results found that 93 per cent of participants saw a significant reduction in discomfort from conditions such as localised back pain, migraine headaches and carpal tunnel syndrome.

When asked if the treatment was of therapeutic benefit, all but 136 of the participants, reporting across all pain categories who had at least three weeks experience of the device, stated that it had helped them significantly.

Tim Watson, a professor of physiotherapy at the University of Hertfordshire, said: ‘I’ve been working in the field of Microcurrent Therapy since the early 1990s and believe it has a demonstrative effect in tissue repair after injury and pain management.

‘The delivery of microcurrent from outside the body acts as an energy source to enhance or to activate the normal repair response.

‘The effect of the treatment may not only enhance repair but can indirectly diminish the pain felt.

‘Clinics may offer it in short weekly spurts, however, research now shows that home-based treatment of at least 1-2 hours a day is the most effective way of administering the therapy and is proven to have the strongest results.’

When Louise Watson was on her way to a friend’s wedding when the incident happened.

At the time she thought little of it and when Louise felt a slight twinge in her back, she simply changed into some flat shoes and carried on with the festivities.

‘The following day I was in agony,’ remembers Louise. ‘I couldn’t sit down properly and walking around was excruciating.’

Over the next two days, the pain in her lower back, pelvis, hip and knee got progressively worse.

‘Along with a constant radiating pain in the bottom of my back, and a sharp pain anytime I tried to move, I couldn’t feel anything in one of my legs,’ says Louise, who lives in Kent with her husband Jason, a nurse. ‘That’s when I realised something serious was wrong and went to the doctor.

‘It was particularly scary when they did reflex tests on my legs, and when they tapped my left knee nothing happened – I had lost all nerve sensation and the doctors couldn’t work out why.’

Unable to figure out what was wrong, Louise was recommended an MRI scan.

Yet, facing a five-month wait on the NHS, she chose to pay and go privately.

She said: ‘They diagnosed a L5-S1 disc bulge, it’s where a disc on your back doesn’t completely come out but sort of pokes out.’

That explained Louise’s excruciating pain. As for treatment, doctors were stumped.

‘I was told I just needed to give it time to heal and that it could take anything up to three years to recover,’ Louise recalls.

Dealing with the pain

Louise said: ‘Meanwhile, they threw painkiller, after painkiller at me and not much else. I worked my way through a load of anti-inflammatory drugs, most of which made me feel incredibly sick so I couldn’t take them.

‘Within a few days of diagnosis I was on high doses of oral morphine tablets and liquids, which made me terribly nauseous and unable to focus, along with gabapentin, a nerve painkiller and amitriptyline, an anti-inflammatory.

‘The most worrying thing wasn’t the fact that I was utterly exhausted and couldn’t walk my dogs for 10 minutes without being wiped out (I used to do walk them daily for an hour) or even the fact that I had to stop going to work four days after the accident and had to give up a job I adored.

‘Most frustrating really was that I was on a cocktail of powerful drugs and still in so much pain!’

Louise saw an osteopath once a week who used an ultrasound treatment to help with muscle pain and also had acupuncture. But little helped.

‘I’d been off work for two months and feeling completely exhausted. I needed to sleep for four hours after the shortest walk and was on a high dose of morphine,’ remembers Louise.

‘I didn’t feel human, I couldn’t focus for longer than 20 minutes on a TV show or on a conversation. I couldn’t even wash my hair without help.

‘The worst thing was that after nursing patients all day, my husband Jason had to come home and look after his 26-year-old wife who couldn’t even get in and out of the bath without his help.

‘It felt as if all my independence had been taken away. I have never felt so helpless.

‘There were a lot of tears.’ 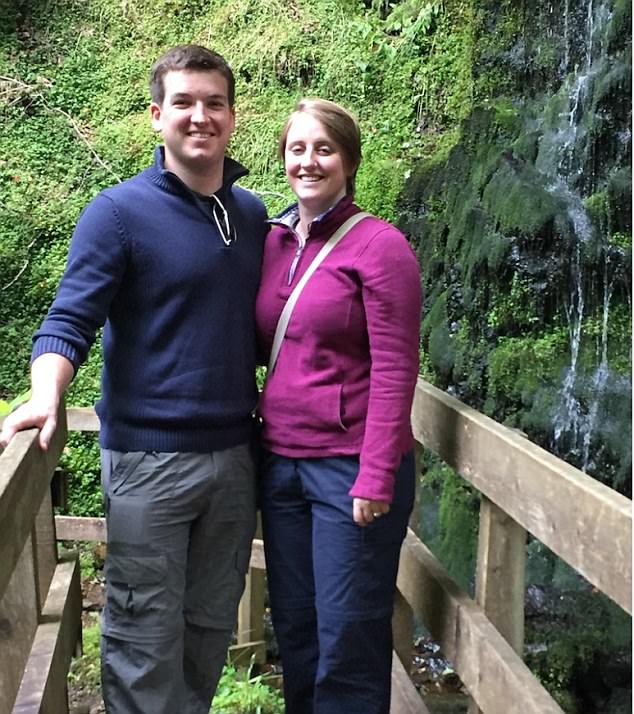 The gadget that finally helped

Desperately scanning the internet for any fixes, Louise stumbled across a gadget called Arc4Health, a small, pre-programmed unit she could use anywhere, that is drug free, non-invasive and wearable and could be used while Louise went on with her day, even while moving around or working.

She said: ‘I was skeptical about it to be honest, but after having tried so many different things and having seen some really great reviews online, I went in not terribly hopeful but desperate for anything to work.’

The Arc4Health is the first device based on Microcurrent Therapy that can be used at home.

Microcurrent Therapy is the application of frequency specific electrical currents to the injured part of the body.

It can help injured tissue heal faster and provide relief from pain caused by injury, such as Louise’s accident, or chronic conditions that cause pain such as arthritis.

‘For the first ‘cycle’ I used it for three hours three times a day for two weeks and because it’s so compact I could wear it while watching TV or being at my computer and then 45 minutes a day after that.

‘There are no cumbersome wires or fittings to carry around and because the device is so small, I could wear it around my ankle and cover it up in boots or sit at my desk with it on my leg.’

Staggeringly, after only two days Louise began to feel the pain in her leg easing up.

She said: ‘After 10 days there was a noticeable difference in my back and little things like bending over to pick things up – which would really hurt before – now wouldn’t strain my back.’ 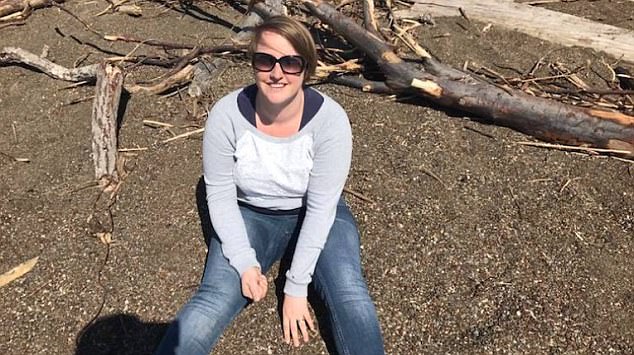 After 16 weeks of wearing the gadget, Ms Watson has come off morphine and is back at work

Getting my life back

After those first 10 days of using her Arc4Health, Louise began coming off the morphine.

She said: ‘I was on such a high dose it took a while to come off, but I’m happy to report that after 16 weeks of treatment with nothing but the Arc4Health I was morphine free and back at work.

‘I now take the odd paracetamol if I get any occasional pain in my lower back. But compared to the painkillers I was on only four months ago, that’s nothing short of miraculous.

‘I still use the Arc4Health 45 minutes daily and I plan to stay on that for the time being as I don’t want the effects to drop.

‘What’s the best thing about all this? Well, there are so many things I am thankful to have back.

‘I can get in and out of the bath and wash my hair on my own now. I am working again. I can walk the dogs for as long as I like every day and I can tie my shoelaces again.

She said: ‘I feel like Jason and mine’s relationship is back on track because I no longer feel like his patient.

‘Mostly though, it’s being able to focus on what people are saying that I really love the most.

‘When I was on so many painkillers I literally couldn’t keep track of what people were saying and it would upset me so much. Now that’s all changed. I feel like myself again’

This article was originally published by Healthista and reproduced with their permission.