Woman is slammed for applying mascara and lipstick while driving

A driver who was photographed applying mascara and lipstick at the wheel, while travelling on a 40mph dual carriageway has been slammed on social media.

The motorist, who had a child on the backseat, has been branded an ‘idiot’ after the images from Wessex Way in Bournemouth emerged.

She was looking in the mirror on her driver’s side sun visor while putting on her make-up, trying to keep one eye on the road ahead, at the wheel of a white Honda.

Photos show how she tried to apply mascara while keeping up with the busy flow of traffic streaming along the dual carriageway.

A woman applying mascara while she drives along the A338 Wessex Way, Bournemouth. The driver who had a child on the back seat has been slammed by other drivers

On social media, Pjk1966 said ‘The penalty is still way too low. A 12 month ban and a fine might make these idiots think twice!’

Nat1234 wrote ‘I personally think she should get a visit from child welfare – putting her child and other’s lives at risk. How can a responsible parent do that.’

Dunroaman added: ‘Makes my blood boil! These brain dead morons should get a ten year ban, car crushed and made to clean the chewing gum off of Dorsetstreets with a tooth pick!

‘I spot this behaviour on a daily basis. Just the other day a female driver nearly knocked me over as I was crossing the road on the zebra crossing by the double roundabouts at Upton crossroads.

‘Came from Blandford Road and was using her knees to steer the car whilst turning into Poole road, with a mobile in one hand and the other hand was holding the sun visor whilst she was looking at her make up!

‘She didn’t see me (or anything else going on at the time). I jumped out of the way, and she continued down the road still with mobile in hand.’

Sergeant Mark Farrow, of the Dorset Police No Excuse team, said ‘Most motorists would realise that putting make up on while driving is simply irresponsible.

‘You are not in proper control of your vehicle and such incidents could amount to careless driving offences.

‘We would yet again remind motorists that you are effectively behind the wheel of a lethal weapon and I would urge everyone to ensure they drive safely and considerately to avoid risking their safety and that of other road users.’ 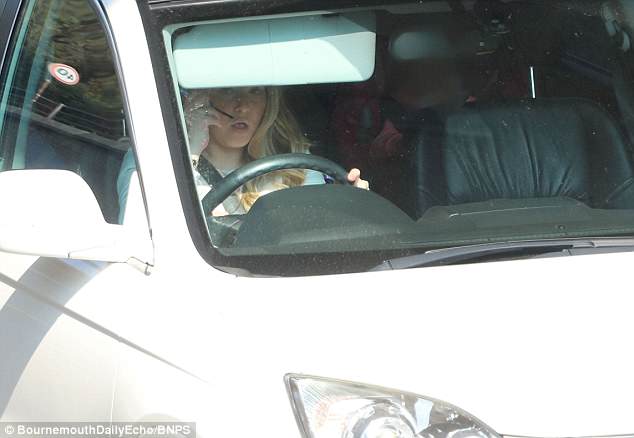 Legislation introduced a year ago means those caught using phones at the wheel can receive six penalty points on their driving licences and fines of £200. They are no longer given the opportunity to attend an awareness course instead of receiving points.

Sergeant Farrow added: ‘As an officer who deals with the often tragic aftermath when a driver is distracted at the wheel, I would like to make a personal plea to the driving public to think about their actions.

‘You may think liking your friend’s Instagram post or Snapchatting your drive home is the most important thing at the time, but this is wrong and your life and those of others should be the priority.

‘Nothing is more important than your safety and the safety of other road users and, while you think you can get away with it, it is vital that drivers realise they could kill someone.

‘We are urging drivers to take responsibility for their actions and leave their phone alone.’