A woman has revealed she ditched her ‘dull’ 9-5 life to live as a nomad – travelling across the UK in a van she converted for £10,000.

Amy Nicholson, 35, is originally from Kent, but currently living in her van in Cornwall, where she works remotely as a freelance marketing consultant from the van she transformed into a home on wheels.

After losing her flat during Covid, Amy had to move back to her family home while working as a marketing assistant at a London agency but quickly decided it wasn’t for her.

She bought the £11,000 van and spent six months doing it up before moving in in April 2021, and has spent the last year travelling across Devon, Scotland, Spain and Portugal.

Amy Nicholson, 35, pictured, originally from Kent, spent £10,000 doing an old van up and left her 9 to 5 behind to become a nomad travelling across Europe and Cornwall 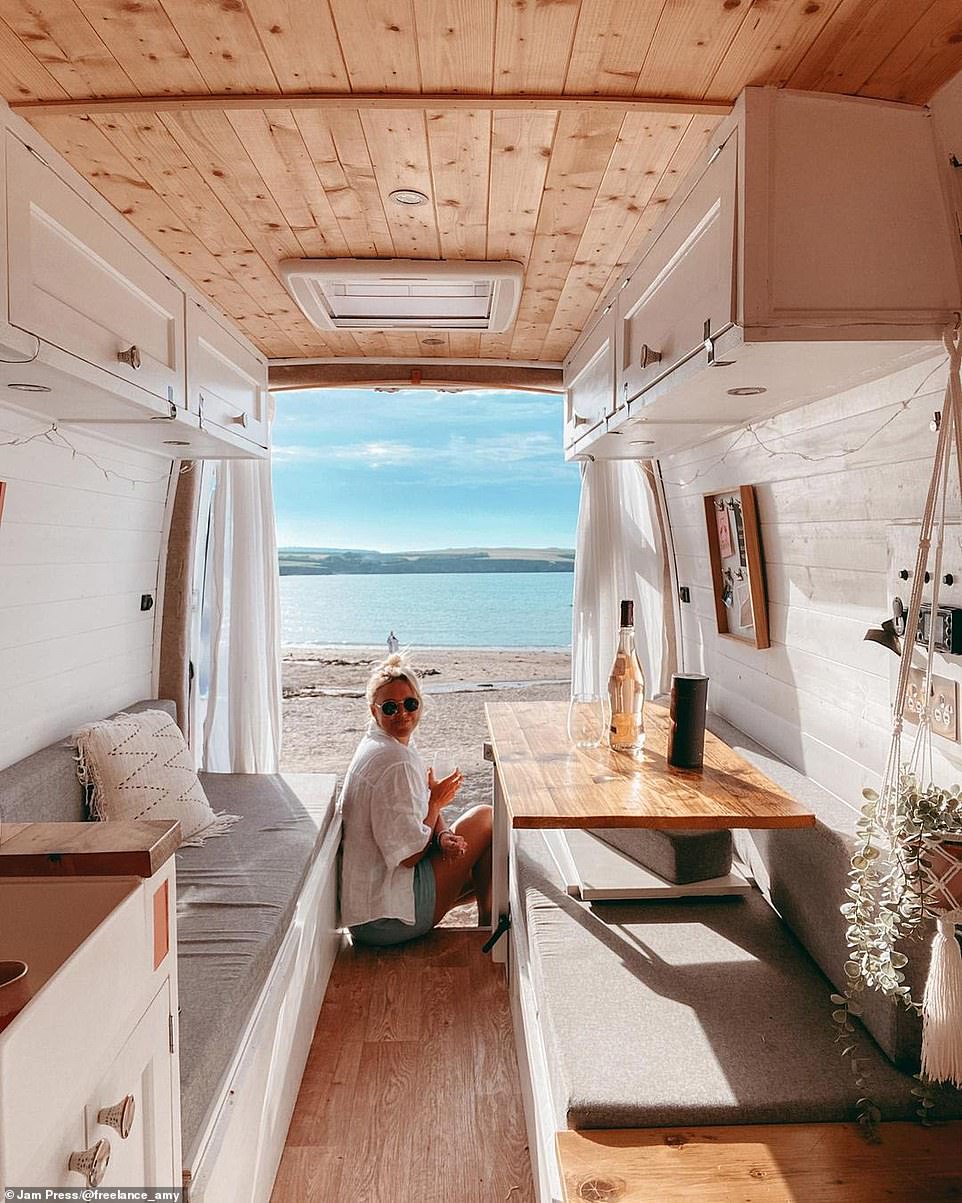 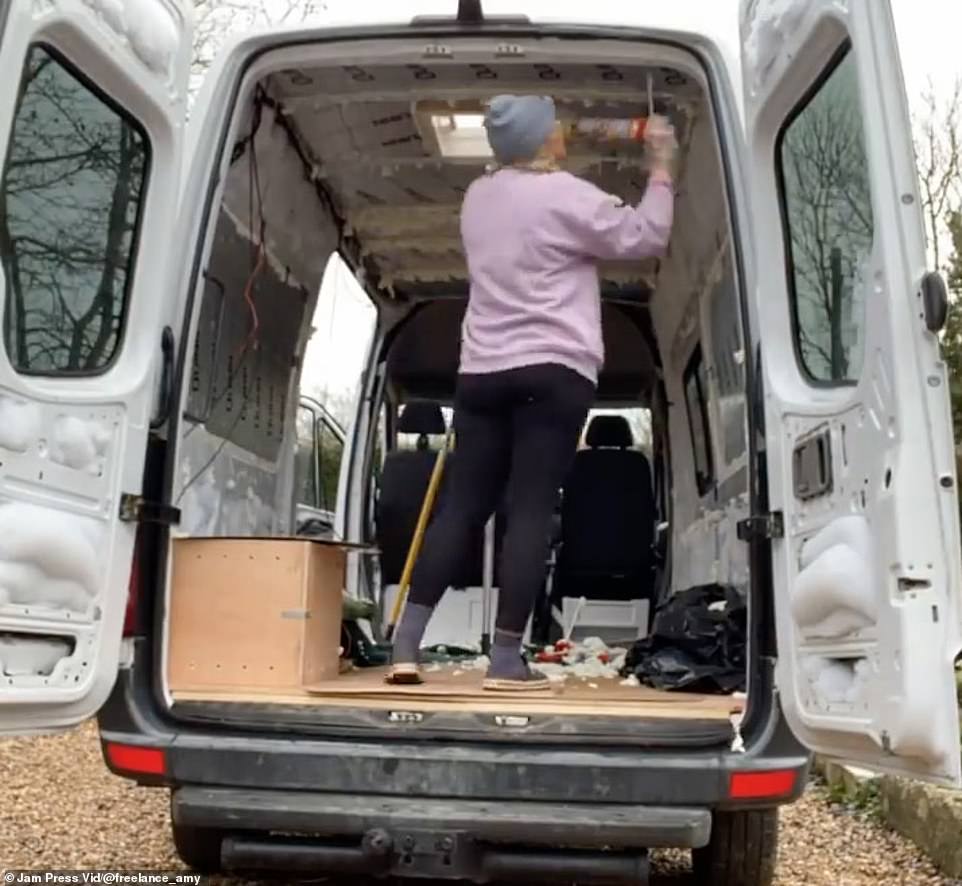 Amy showering using the water of the kitchen sink, left, and proudly posing in front of her van, right. She said her nomadic lifestyle is worth some thorny details, like the fact she has to empty her toilet

‘I decided to buy my first van so I could have some freedom whilst I was forced to live back at home with my parents,’ Amy said.

‘I fell in love with the simple life, and so decided to swap my van for a bigger one, and one that was not yet converted.’

Amy spent the third lockdown in winter of 2020 converting the van herself, keeping costs to an absolute minimum. 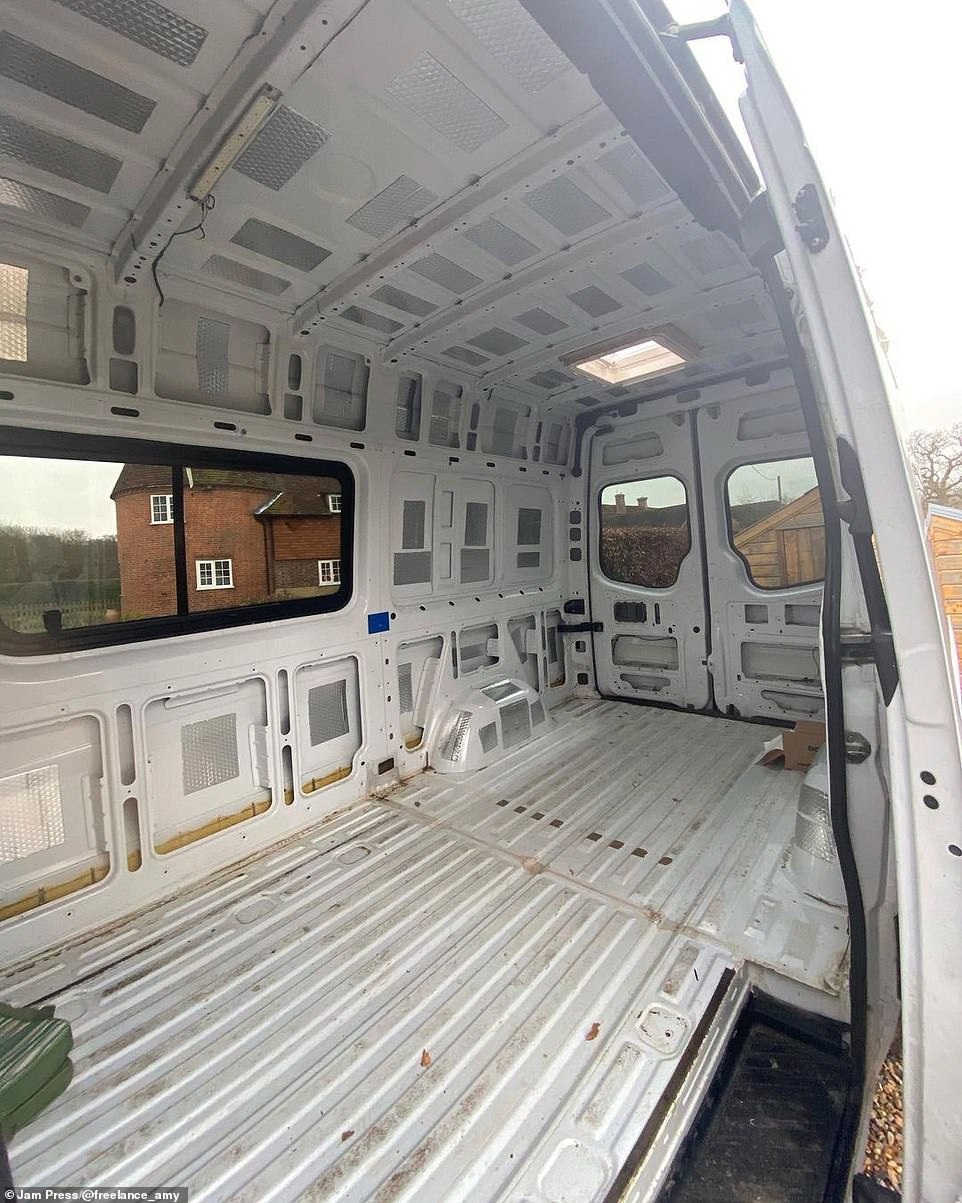 The van as it looked when Amy purchased it to be her mobile home’s ‘shell’ in 2020. She began by treating the vehicle for rust 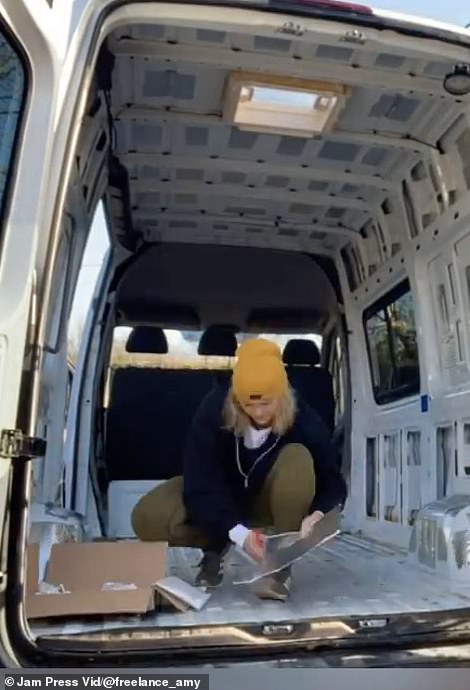 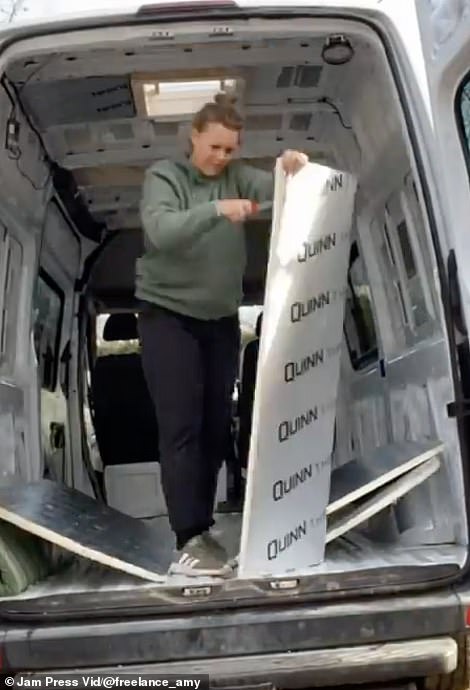 Amy insulated and sound-proofed the van, left, before she moved to putting the floor in, right 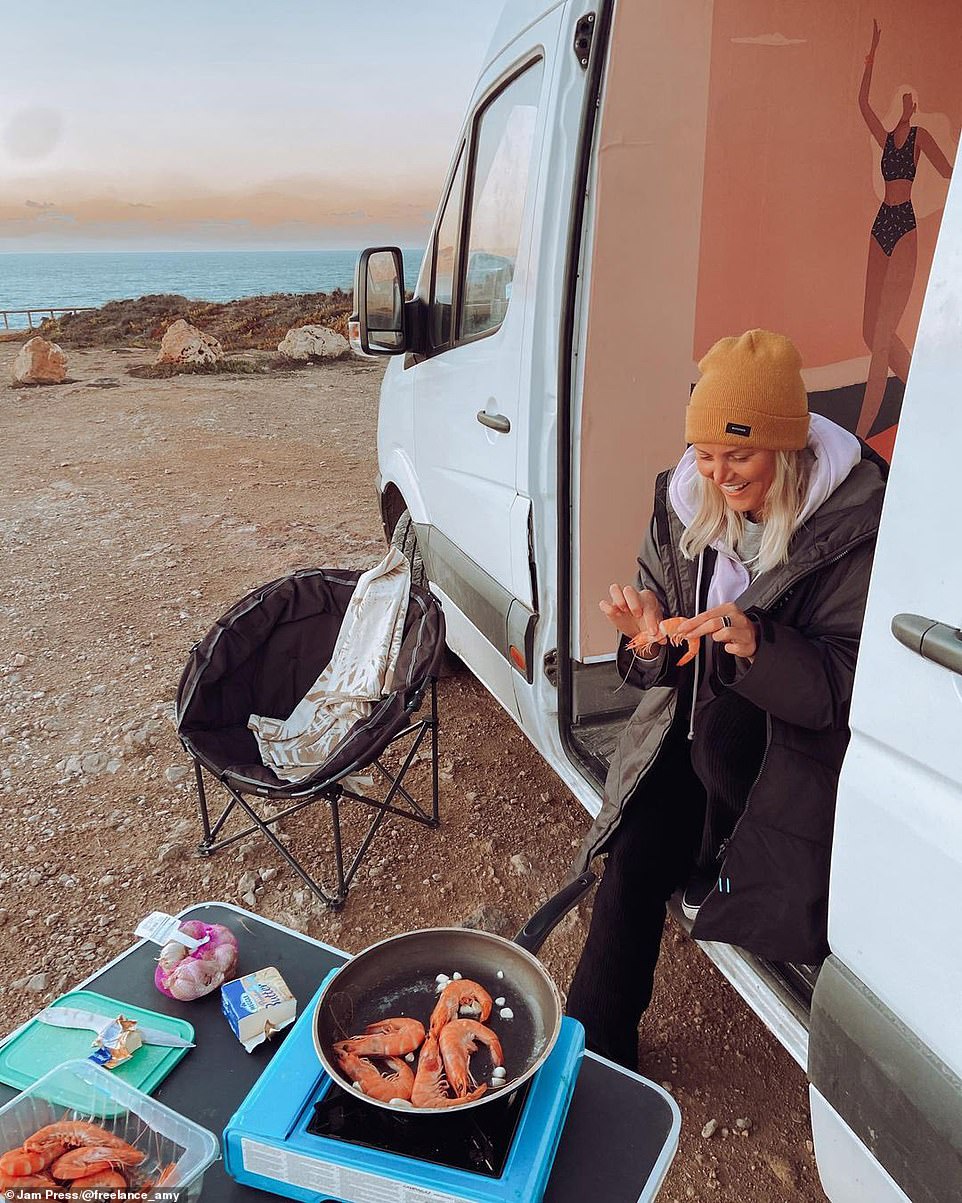 Amy can cook in her van thanks to her equipped kitchen, and she can wash using a hose connected to the kitchen sink 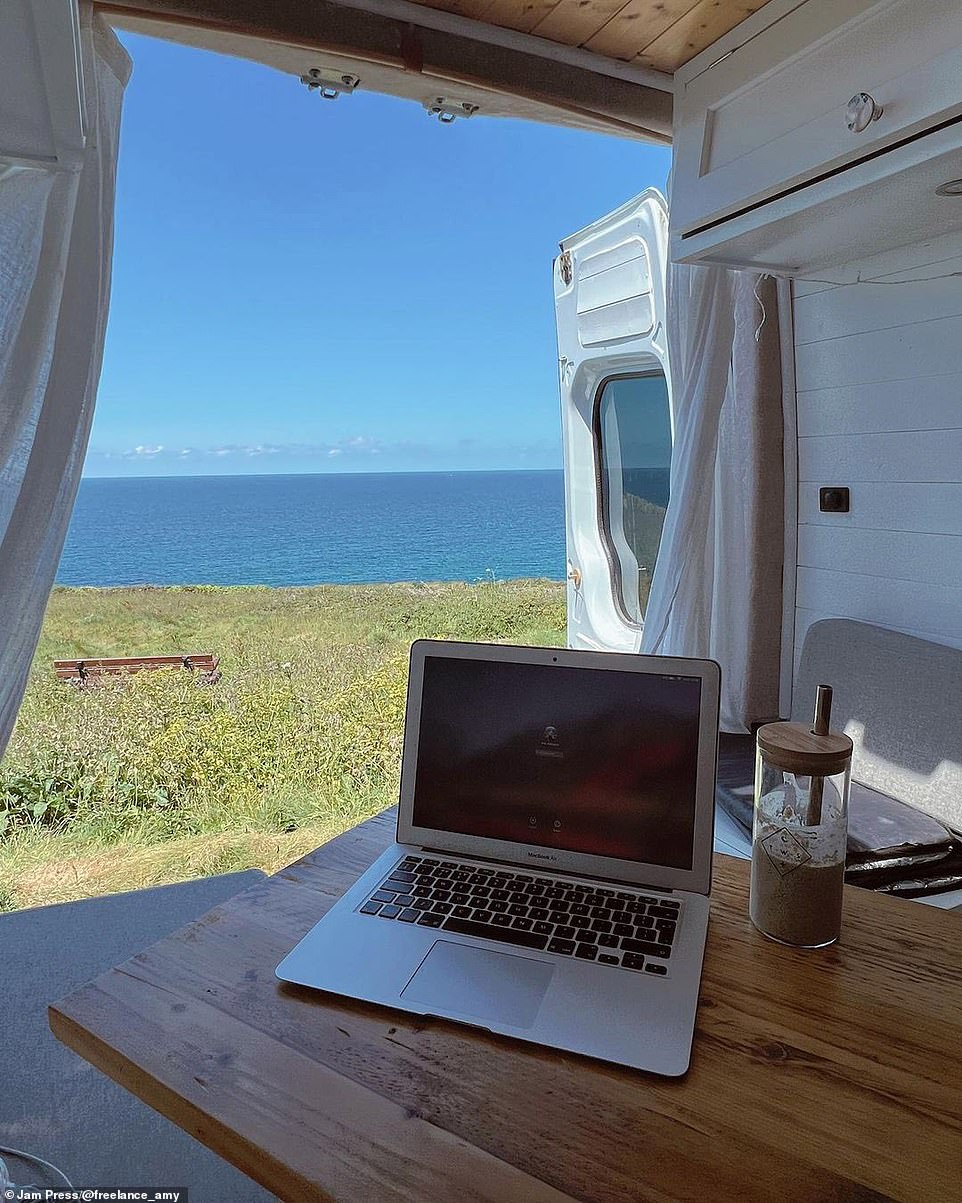 With a hotspot WiFi connection, Amy can work from anywhere she pleases and sets her laptop up in front of stunning views 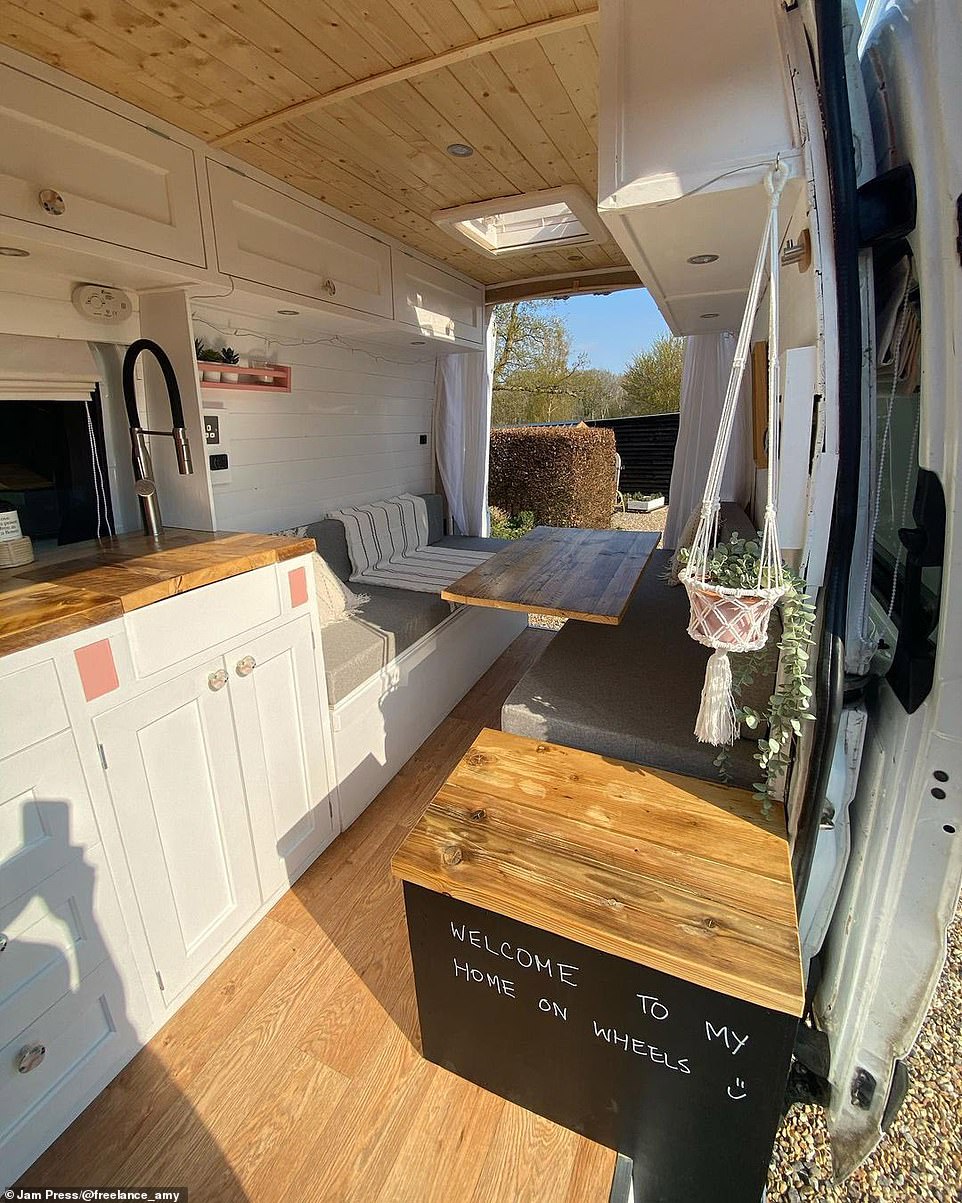 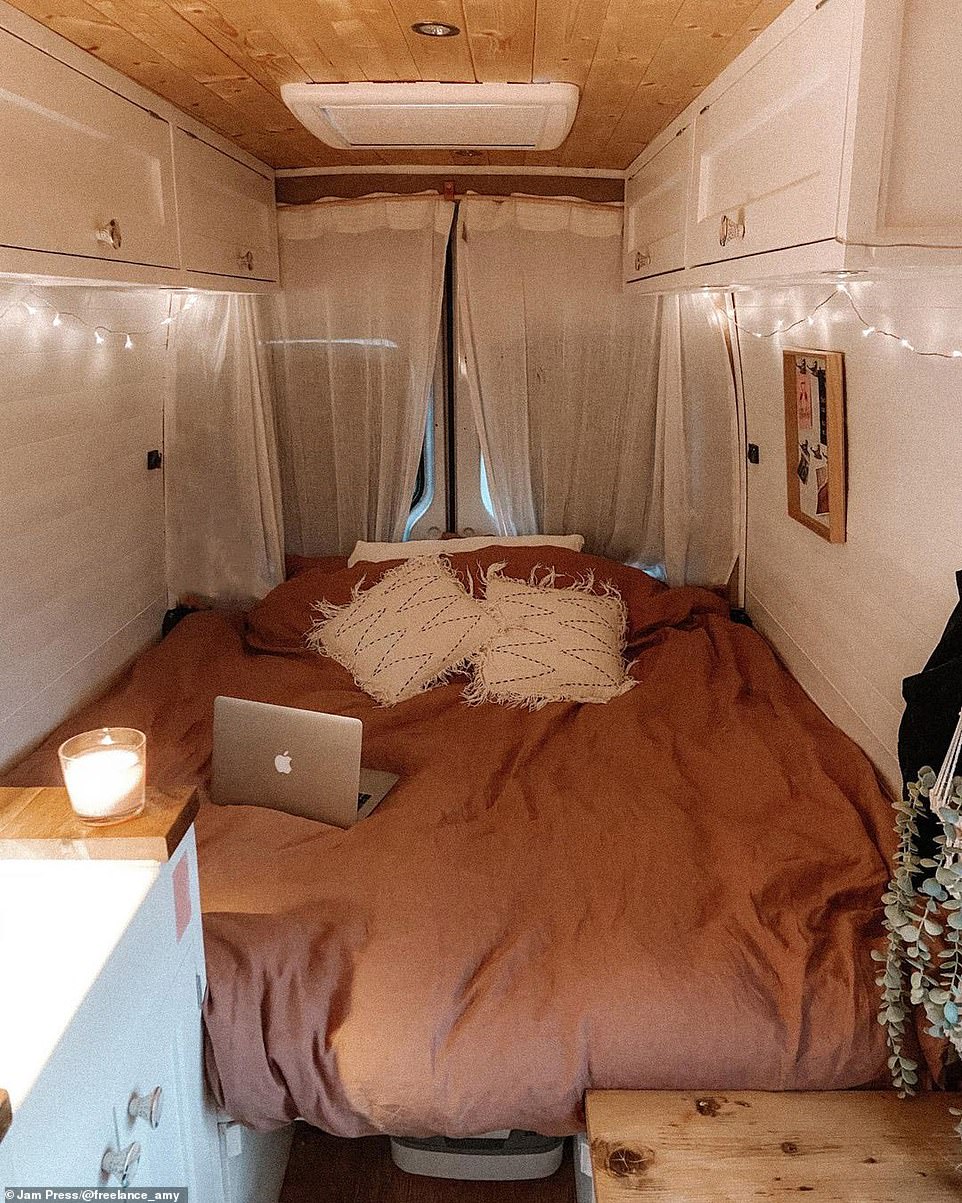 The sofa and table at the back of Amy’s van can be converted into a double bed at night, pictured

‘I stripped the van and treated any rust, then added sound deadening and insulation. I then put in three windows and a skylight, as well as adding the floor and getting the electric system and solar power panels.

‘After this I cladded the walls and ceiling, and painted them. I then built and added my headliner shelf and bulkhead wall, which I then covered with the surf mural wallpaper.’

Amy then built and added furniture, including the sofa and table which turns into her double bed. She then finished up the kitchen area as well as adding all the overhead cabinets.

Amy said: ‘The whole build took me about six months, but only working on it a few days a week.’

She moved into the van in April 2021 and has spent the last year travelling all over the UK, including Wales, Scotland, Cornwall, Devon, as well as through Portugal and Spain. 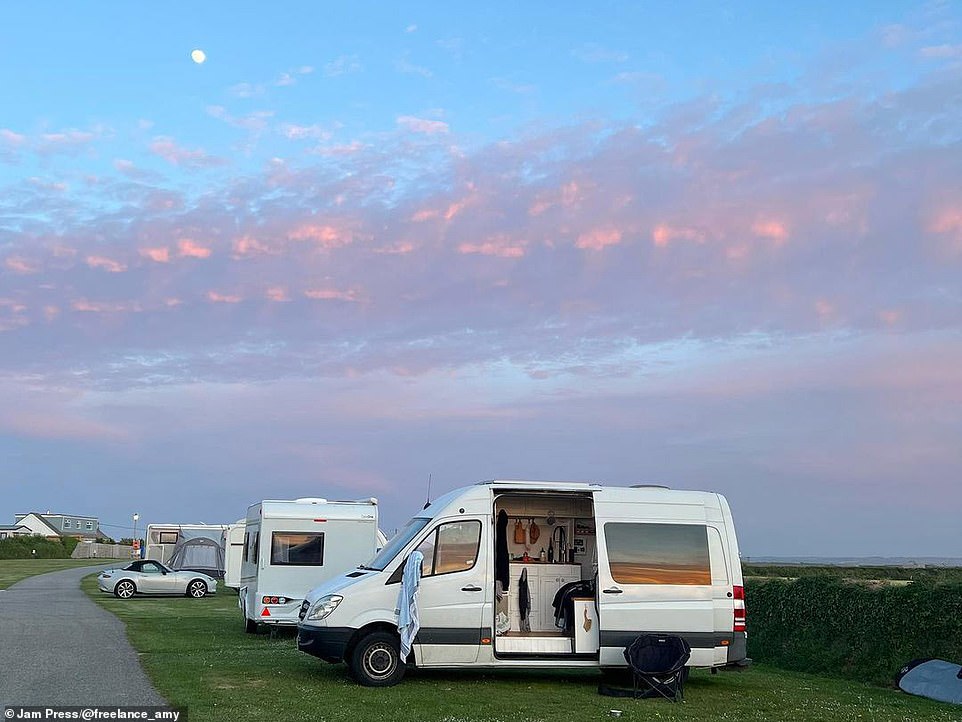 Amy’s dream van parked in a camping site in Devon. Amy has been travelling all across the UK in her mobile home 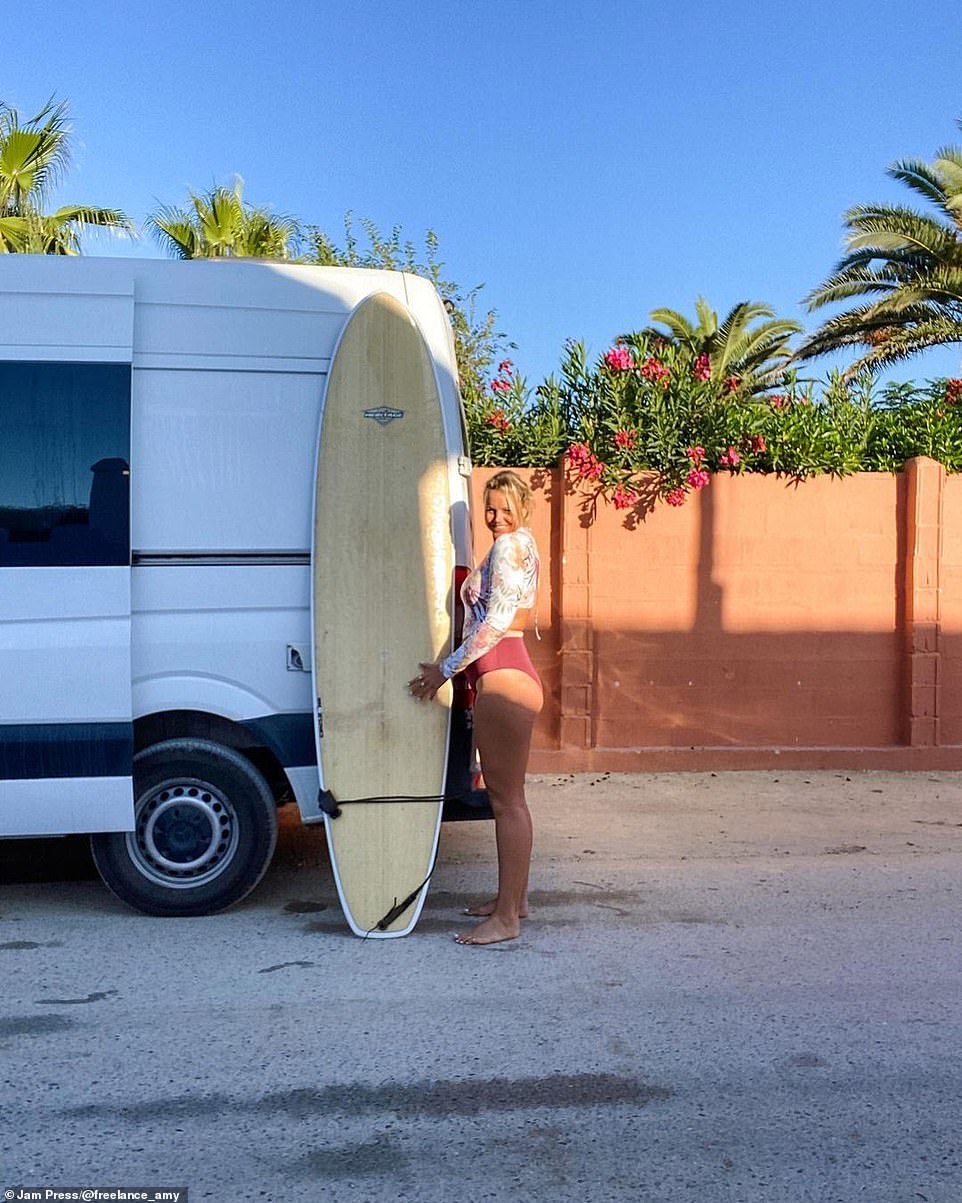 She said: ‘Being a nomad has enabled me to meet people from all walks of life, to be inspired by different cultures, and to experience some amazing adventures.

‘But the hard thing is being away from my friends and family back home, and also lacking a routine. It can get exhausting always moving and always searching for the next thing.

‘There are of course small annoyances, like having to empty my toilet or running out of water midway through washing my face. But having the freedom to park my home wherever I want tops all of these cons.

‘I have made some amazing connections because of my adventures in the van – especially meeting like-minded people who just get this way of life.

‘But equally, being always on the move makes it hard to sustain those relationships when I’m always leaving.’ 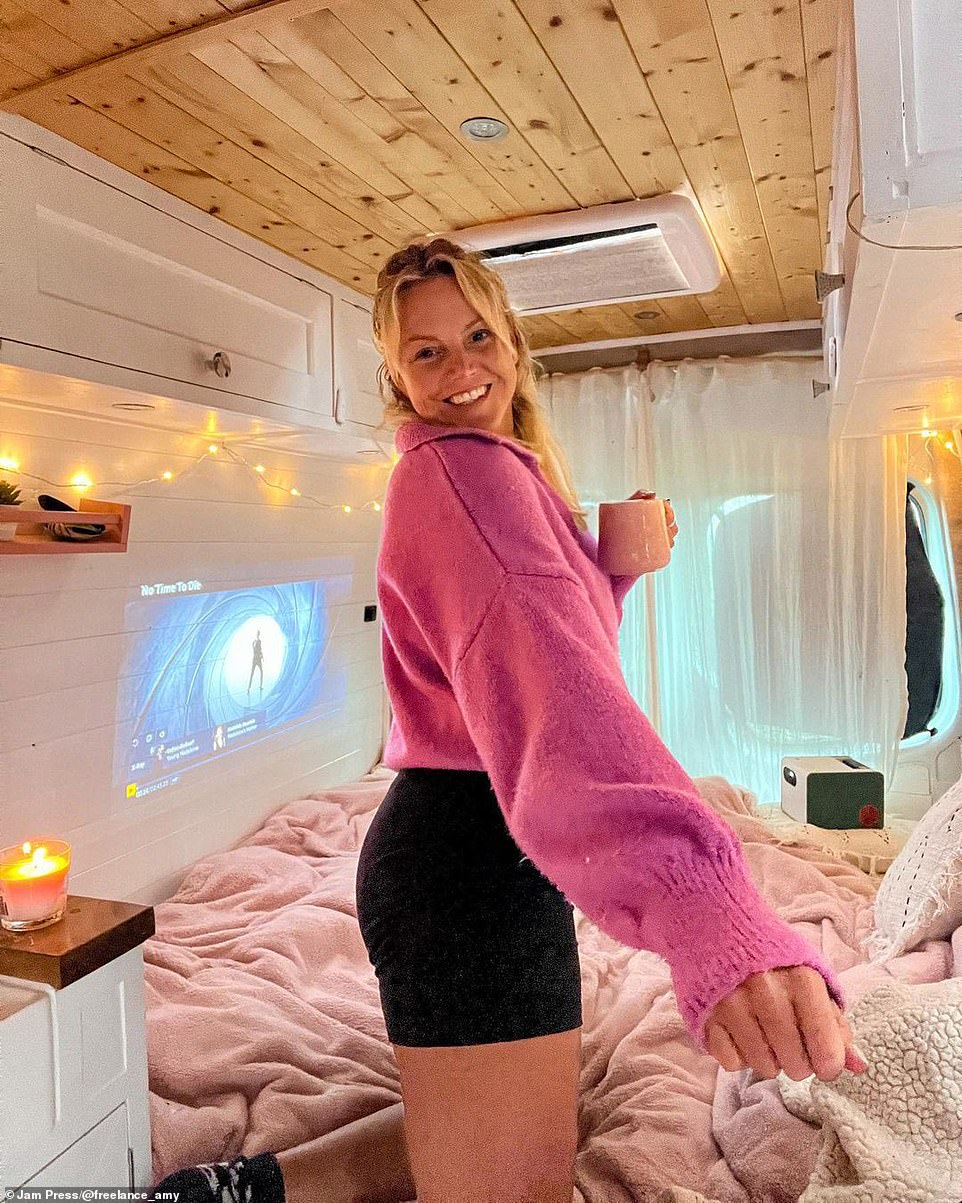 While she’s happy with her decision, Amy advised others to start by renting a campervan to see if the lifestyle suits them before buying one

Amy is currently looking forward to her future travel plans, which include travelling out of the UK.

She added: ‘My plan is to go back to Portugal after a summer in England, and do a big road trip there in the van, chasing the sun and surf. I don’t have to make any changes as my van is already set up for full time living as it is.

‘I would also love to explore Italy in the van, especially the lakes and the Dolomites, and I’d love to go back to Africa and do a road trip there. So much still left to see.’

Amy has shared some advice for anyone looking to go and fulfil their nomad dream.

She said: ‘I would suggest renting a campervan first and going out on a trip. That way you can really experience this way of life before you invest in your own.’