A woman who was left paralysed from the waist down after being hit by a drunk driver managed to walk down the aisle at her wedding.

Erin Rollins, 33, of Chicago, was driving in November 2014 when she was involved in a collision that paramedics said she was lucky to survive.

The freelance journalist suffered a spinal cord injury that sent shards of bone into her spinal canal and abdomen.

Cuts in her bowel led to internal bleeding, which needed emergency surgery, and paralysis from the waist down. She has had eight operations in total.

Over the next two years, she re-learnt how to walk with the loving support of her husband, Dennis, 39, whom she married two years after her accident.

Despite her life and health being permanently damaged, Mrs Rollins forgave the drunk driver on the day of her sentencing, hugging her in court.

Erin Rollins, 33, of Chicago, walked down the aisle to marry Dennis, 39, two years after she was left paralysed from the waist down after being hit by a drunk driver 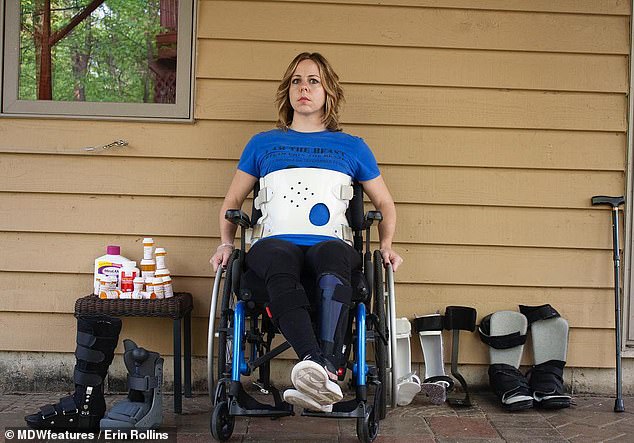 Mrs Rollins was driving in November 2014 when a she was involved in a collision that paramedics said she was lucky to survive. She had to re-learn to walk. Pictured in a wheelchair while wearing a brace to support her back 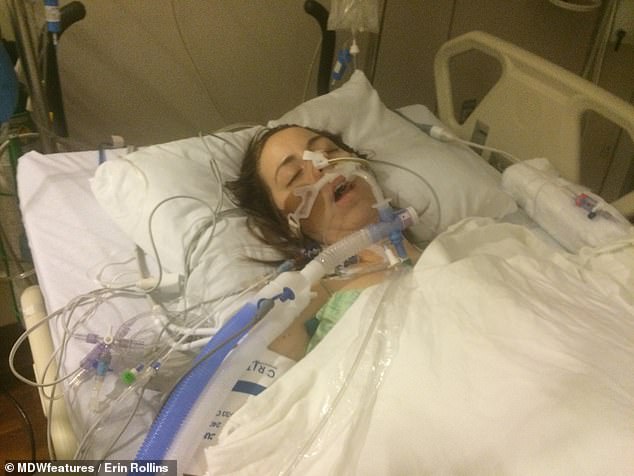 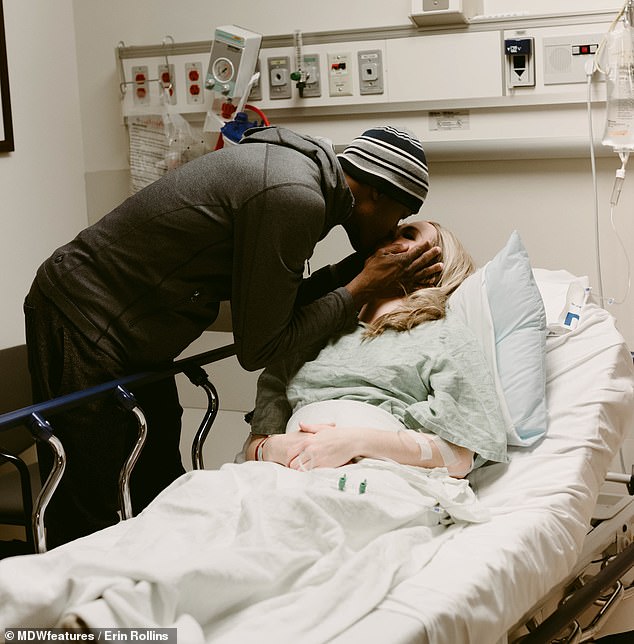 Mrs Rollins remembers being in hospital after the crash and feeling numb, but initially thinking it was because of medication. Pictured, being visited by Mr Rollins

Mrs Rollins said: ‘I may not have physically died on November 9, 2014, but I lost my life.

‘Before the crash, I had dreams of having a career in journalism, but now I’m faced with the harsh reality that despite gaining back a lot of function in my body, I still have devastating losses that people don’t see from the outside.

‘I’m faced with these losses every time I have to say no to something because of pain, or because I’m physically unable to participate.

‘I will never be able to restore the time that was lost. I can forgive and move on, but the losses and sadness remain.’

After a drunk driver travelling the wrong way came around a corner and collided with Mrs Rollins, she was rushed to hospital.

Staff ran tests and checked Mrs Rollins, who couldn’t feel anything – she initially thought this was due to the pain medication.

However, she was found to have suffered an incomplete spinal cord injury and two burst fractures which sent shards of bone into her spinal canal, resulting in paralysis from the waist down.

Mrs Rollins said: ‘My memory from after the crash is very spotty and I remember specific moments.

‘I remember being wheeled backwards into the ambulance, but I had no idea what happened. 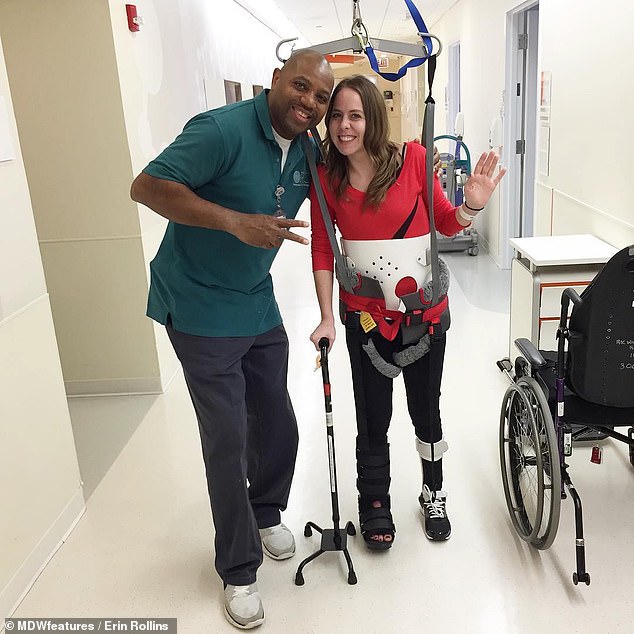 Mrs Rollins, pictured with a doctor learning how to walk again using a stick and harness hanging from the ceiling, suffered an incomplete spinal cord injury and two burst fractures which sent shards of bone into her spinal canal, resulting in paralysis from the waist down 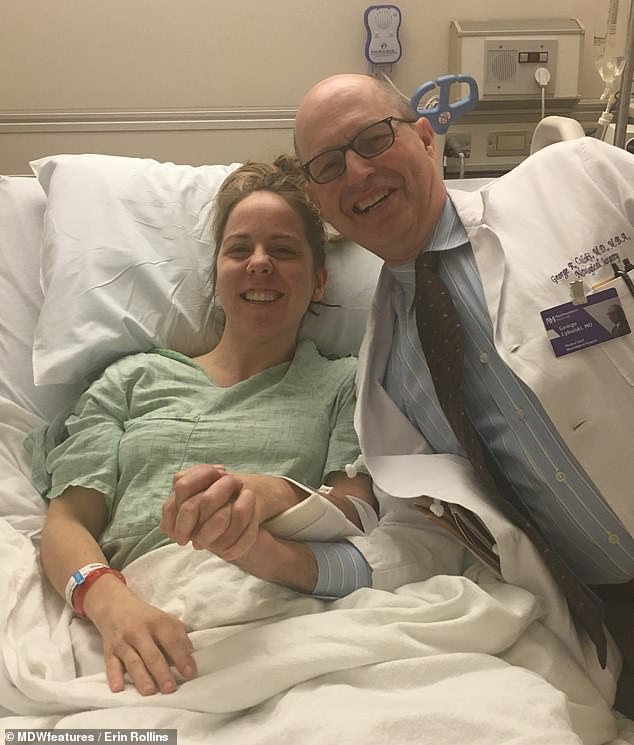 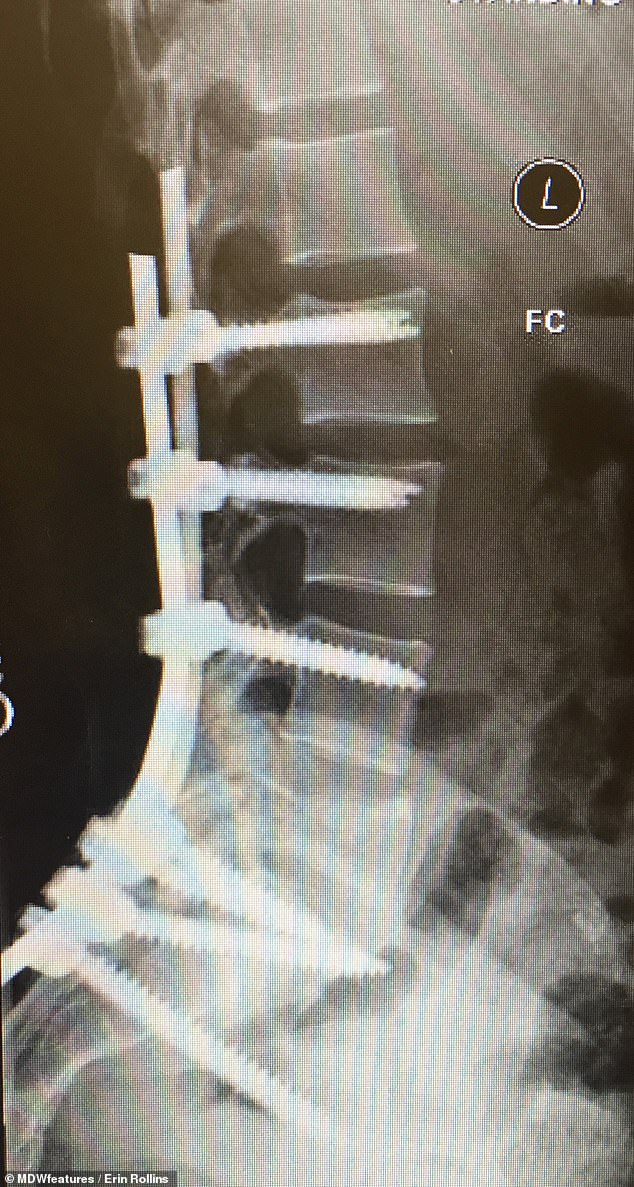 Mrs Rollins has had eight surgeries, including back surgery in 2016 to put rods metal rods into her spine to keep it from collapsing. In 2017, surgeons deemed her spine secure and they were able to remove all the hardware

‘The paramedic came over and said I was lucky to be alive because most people don’t survive crashes like that. I kept telling them I was in the worst pain of my life repeatedly.

‘The next memory I have is of being in the hospital with nurses around me, taking me for tests and telling me they had to put an indwelling catheter in.’

She added: ‘But I didn’t feel anything though they told me it would be really uncomfortable.

‘I remember thinking it must have been the medication to numb the pain, but it wasn’t until later that I found out that I actually had no sensation from the waist down.’

The shards of bone also caused holes in Mrs Rollins’ colon, small intestine and bowel and internal bleeding, requiring emergency surgery to repair her organs and stop the bleeding.

Mrs Rollins said: ‘At one point, someone came into my room and said they had to do emergency surgery, but they didn’t know what to do first. 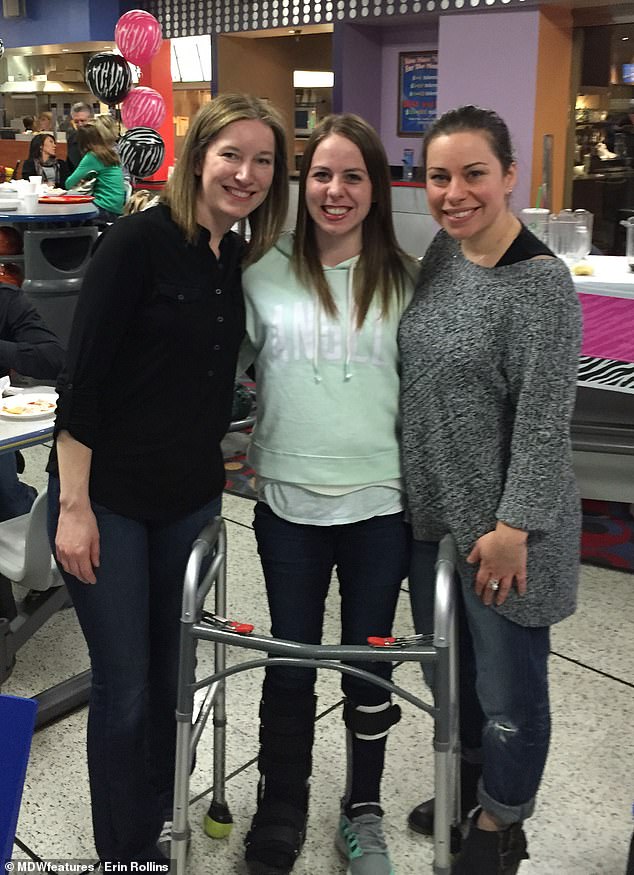 Mrs Rollins began physiotherapy on December 6 and by December 18 she was able to walk with a walker and a harness for support. Pictured with friends after weeks of physiotherapy 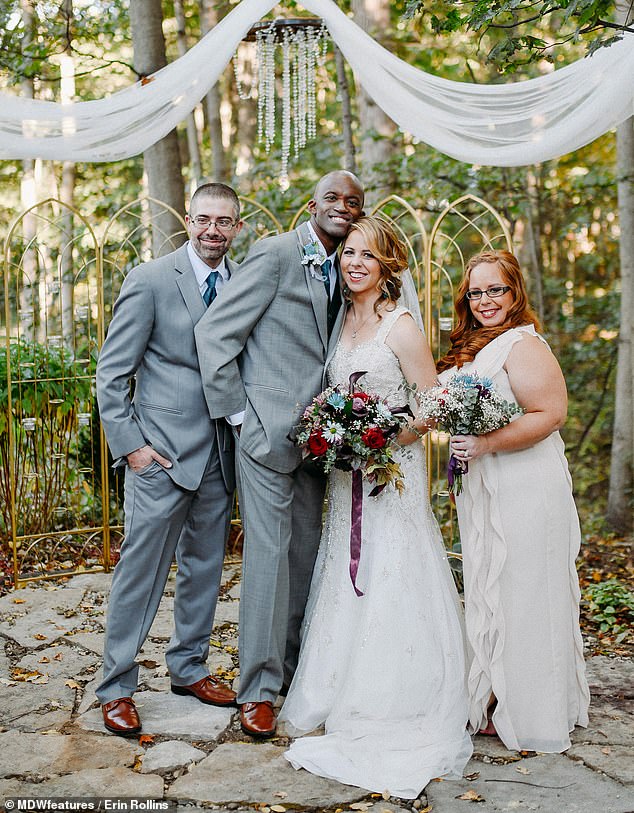 On the day of the drunk driver’s sentencing, just weeks before Mr and Mrs Rollin’s wedding in October 2016 (pictured), Mrs Rollins forgave the driver and even hugged her in the court 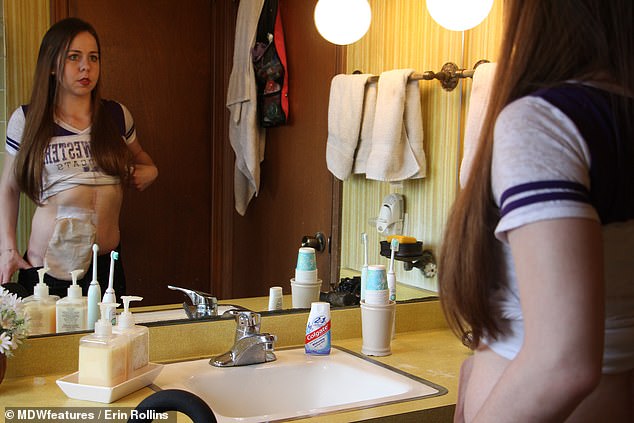 HOW CAN PARALYSIS BE TEMPORARY?

Paralysis can be temporary, despite widespread beliefs that it is permanent and those who are given the diagnosis will never walk again.

The term paralysis just refers to the inability to move some, or all parts, of the body, according to the NHS. It can come and go.

There are several forms of paralysis, including paraplegia (both legs), tetraplegia/quadriplegia (both arms and legs), hemiplegia (one side of the body) and monoplegia (one arm or leg).

Physiotherapy can help victims regain strength and muscle mass, and help some patients to regain movement. However, recovery depends on several factors, including how severe the damage to the spinal cord is. It can take up to two years for victims to regain feeling.

Medication is given to relieve sufferers of any pain they may feel.

‘Apparently, the holes in my colon, small intestine and bowel could cause sepsis and kill me.

‘I was also bleeding internally from the severed iliac artery and there was plenty of free-flowing fluid in my abdominal cavity.

‘I had such severe spinal nerve compression that if they didn’t fish out the hundreds of shards of bone in my spinal canal, I could be completely paralysed for life.’

Three days after the collision, surgeons had to operate on the spinal column to remove the shards of bone.

Mrs Rollins was rushed for a third and emergency surgery on November 19, ten days after the crash, because the surgery to close the holes in her abdomen had failed and she developed sepsis – when the immune system attacks itself, triggered by an infection.

Mrs Rollins said: ‘They caught it just in time and within hours I would have died because the colon was literally spewing at the surgeons when they opened me up.’

Mrs Rollins began physiotherapy on December 6 and by December 18 she was able to move with a walker and a harness for support.

The crash brought Mrs Rollins’ life to a standstill and she’s spent years regaining her strength.

She had various surgeries, including two to insert spinal rods to stop her spine collapsing. In 2017, surgeons deemed her spine secure and they were able to remove all the hardware. 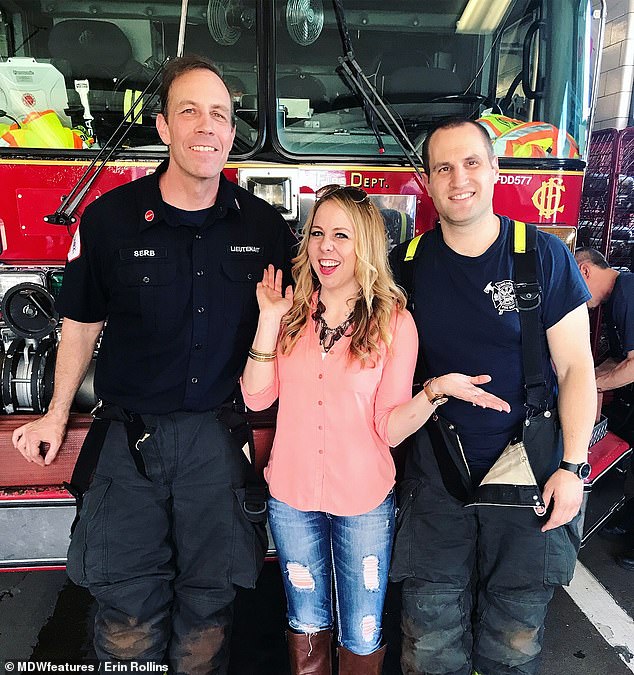 Four years after the crash, Mrs Rollins went to meet the incredible firefighters who helped remove her from the wreckage and take her to hospital (pictured) 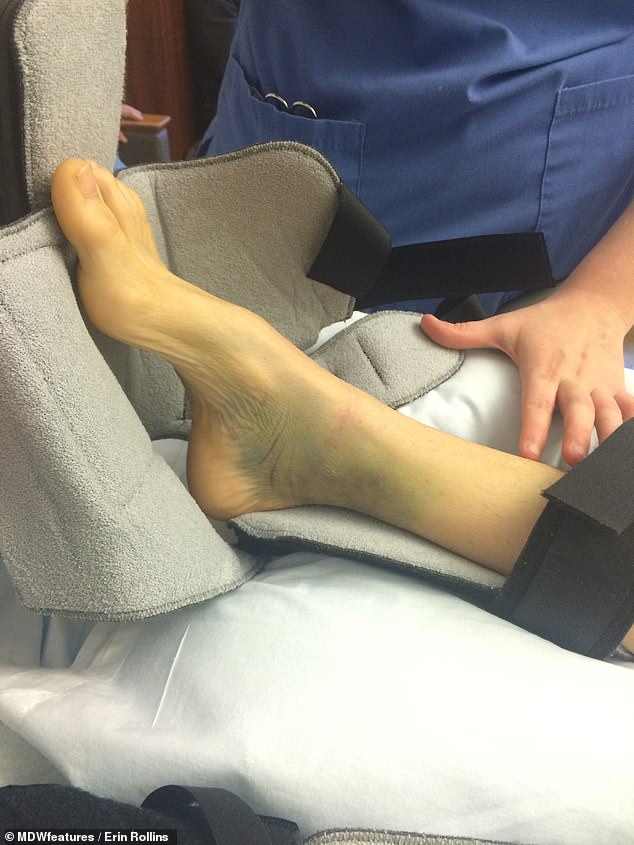 Mrs Rollins foot was damaged in the car crash. She is now able to walk independently but requires braces on her feet as certain nerves and muscles don’t work

She is now able to walk independently but requires braces on her feet as certain nerves and muscles don’t work after being injured.

She may also need a stoma bag, a pouch that collects faeces and urine on the outside of the body, for the rest of her life.

Because of the abdominal damage, she is unable to carry much, therefore carrying a child in the future will be very high risk.

Mrs Rollins said: ‘I can’t do anything that might potentially hurt my spine or have impact.

‘I struggle with fatigue which is common in spinal cord injury patients and I can’t handle the heat as my spine has trouble regulating temperature.

‘The inability to urinate on my own, the complete dependence I have on intermittent catheters and colostomy bags is frustrating, discouraging and extremely expensive.

‘I worry about the fact that my husband and I want to try and get pregnant in the next couple of years, but I will never be able to safely pick up my child once he or she grows beyond 15 pounds.

‘I was told that a C-section is the only safe option for delivery, but a C-section will cut through the abdominal reconstruction, so my plastic surgeon would have to be present at the birth to close my abdomen properly.’

Remaining optimistic has helped Mrs Rollins to recover much of her movement and in October 2016 she walked down the aisle to marry her husband.

Mrs Rollins said she has amazed many doctors after surviving so many obstacles which almost led to her death.

Four years after the crash, she went to meet the incredible firefighters who helped remove her from the wreckage and take her to hospital.

On the day of the drunk driver’s sentencing, just weeks before the wedding, Mrs Rollins forgave the driver and even hugged her in the court.

She said: ‘People assume that because I’ve forgiven the drunk driver and maintained a good attitude, it means that everything is okay, but it’s not. The grief is real and will last a lifetime.