A woman who was misdiagnosed with a rare genetic disease as a child was actually being starved by her mother, condemning the now severely disabled woman to a ‘lifetime of hell’.

She has spent most of her life separated from her family and has lived in a group home since the age of 16, the ABC’s 7.30 program reported.

Mr Milne was in 1984 told his eight-month-old baby daughter didn’t have long to live as she suffered a rare genetic disease that affected her cells.

As the income earner of the household, Mr Milne had been away working on a farm and was unaware his wife, Yoey’s mother, had been neglecting the newborn. 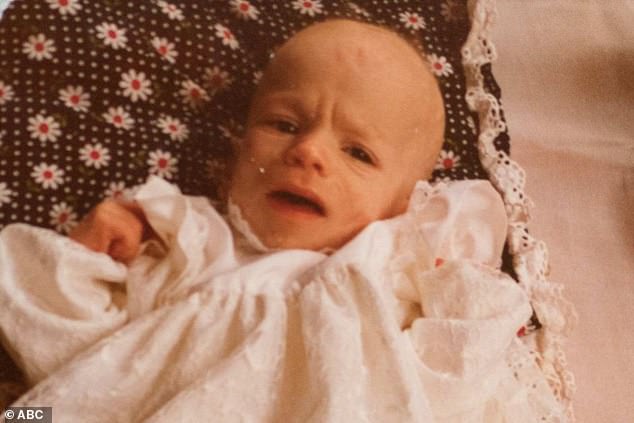 Mr Milne was in 1984 told his eight-month-old baby daughter did not have long to live as she suffered a rare genetic disease and was malnourished. Really, her mother was staving her

Staff at the facility decided Yoey’s illness was not from her genes, but rather a reflection of Munchausen syndrome by proxy – where a carer makes up or causes illness to someone in their care.

‘I had no idea this thing was going on with my wife,’ Mr Milne said.

Yoey was removed from her mother and began to regain weight. Mr Milne’s two children were put into foster care in New South Wales.

While Mr Milne did not abuse his daughter, he failed to report his wife’s abuse and couldn’t immediately prove he was a capable father.

Yoey, who had developed signs of epilepsy and autism by the age of two, was sent to a foster home and Mr Milne moved to Tasmania with his new wife and children.

Mr Milne wrote letters to the department, but assumed his daughter had died.

‘We kept sending stuff but we never got any reply. I made her a jumper. They just cut us off,’ Mr Milne said. 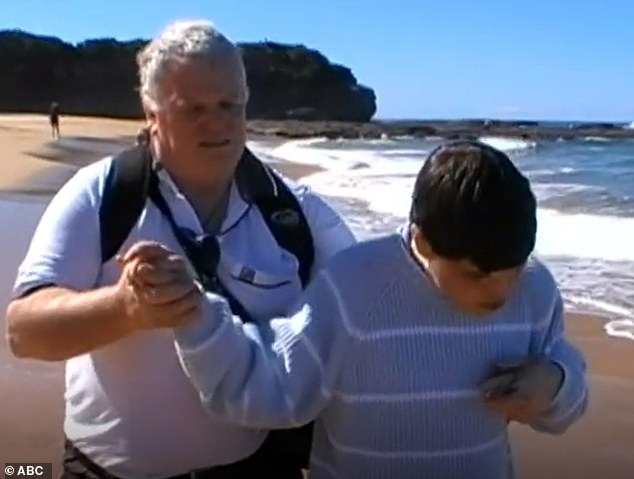 What is Munchausen syndrome by proxy?

Munchausen syndrome by proxy (MBP) was the term previously used for a rare but serious form of abuse where a person either fakes or produces symptoms in someone else, usually their child.

In Australia, MBP is now known as ‘fabricated or induced illness by carers’ (FIIC), to distinguish it from the mental disorder Munchausen syndrome.

In Australia, FIIC is considered child or victim abuse, rather than a mental disorder.

In cases of FIIC, a carer may deliberately poison or harm a child to procure unnecessary tests and medical procedures. The most common form of abuse appears to be apnoea (stopping breathing).

The child may be revived by ambulance officers and taken to hospital, where all tests prove negative.

Sometimes the child doesn’t survive the carer-induced apnoea. FIIC is very rare, with estimates suggesting that between 15 and 24 cases occur in Australia every year.

The mother is the perpetrator in most cases. However, this is thought to reflect the high number of women who take on the role of primary caregiver.

Mr Milne was updated on Yoey’s whereabouts when she was aged 16, after her foster parents placed her in the care of a New South Wales group home.

Mr Milne began fighting to get his daughter back, but it wasn’t until she was 22 years old that they were reunited at a group home in western Sydney.

‘It was like a prison – keys everywhere. All these holes in the walls,’ he said.

After seeing Yoey’s living situation, Mr Milne began to lobby for his daughter to live in a better group home.

Amid his fight for his daughter, Mr Milne found documents in 2007 which revealed Yoey was sexually abused when she was 12 years old.

The sexual abuse happened at a respite centre when Yoey was away from her adopted parents.

Mr Milne complained to the Royal Commission into Institutional Responses to Child Sexual Abuse, but no one was ever prosecuted because ‘Yoey has a disability and is unable to give evidence,’ he said.

Mr Milne took Yoey to a psychiatrist during this period and he was told his daughter likely had developmental disorder Smith-Magenis syndrome.

Mr Milne believes Yoey’s life is a reflection of how things can go wrong for people with disabilities.

In distressing footage shared by the broadcaster, Yoey was filmed hitting herself on the head while staying in a group home in 2011.

There was reportedly only one carer on duty for four patients.

Yoey is also going blind from cataracts caused by medication. Self-harming had also led to a detached retina.

Mr Milne said his daughter has been through ‘hell’ but described her as an ‘amazing’ human being.

‘Yoey has been deprived of her family. It’s not the other way around,’ Mr Milne said.

She is currently staying at a group home through the NDIS.

Mr Milne is planning on taking Yoey’s case to the Royal Commission into Violence, Abuse, Neglect and Exploitation of People with a Disability.

Yoey’s story can be watched on ABC iView