Woman mugged at cashpoint in Leytonstone, London by female attacker

This is the shocking moment a woman is violently mugged by a female attacker as passers-by stand back and do nothing.

The woman, whose identity has not been revealed, was getting money out of a cash machine in Leytonstone, east London yesterday afternoon when the brutal assault took place.

Her attacker was caught on CCTV pretending she was in the queue behind her before throwing herself towards the woman and punching her in the head. 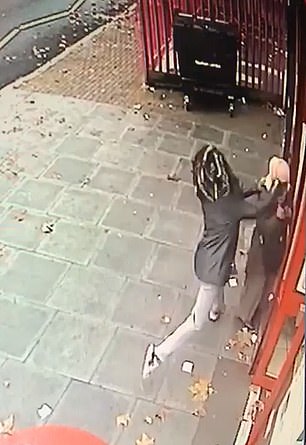 This is the shocking moment a woman (pictured wearing pink headscarf) is violently mugged by a female attacker (pictured wearing black with long hair) as she tries to get money from a cash point in Leytonstone, east London yesterday afternoon

The victim, who is seen wearing a pink headscarf and carrying a black shoulder bag, is almost thrown off her feet as she desperately tries to defend herself.

The mugger spins her around a number of times trying to take her handbag and repeatedly slapping her in the face.

The women grapple with each other for nearly a minute, with the victim putting up a brave defence, before the mugger, seen wearing a black coat and wearing her black and blonde hair in dreadlocks, finally takes the bag and runs way.

Meanwhile three pedestrians and a number of cars go by and do not intervene to help.

The incident was captured on the local Post Office’s CCTV cameras.

An employee told MailOnline the woman was ‘badly assaulted’ and received help from staff inside the Post Office after she was attacked.

He said the police were called within 15 minutes of the assault, which has shocked thousands of local residents.

The CCTV footage was posted on social media following the assault, which took place just after 3pm outside the Leytonstone High Road Post Office yesterday and has been viewed more than 60,000 times. 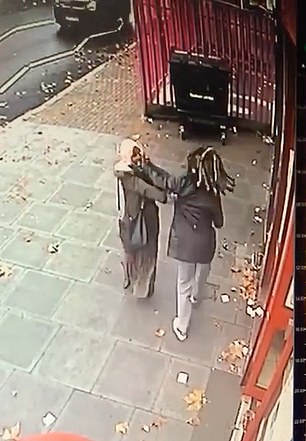 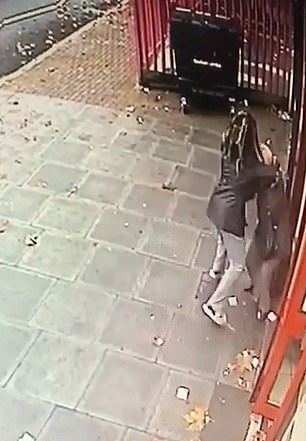 People commenting praised the efforts of the victim, while others slammed the bystanders who failed to intervene.

One person wrote: ‘Sister did good fighting back,’ while another posted: ‘That sister put up a good fight, that is shocking!’

Another person commented: ‘How can the people just see and walk by? Ridiculous!’

Neighbouring residents in east London warned other women to be vigilant and wary of potential attackers.

One person who shared the clip said: ‘The sister didn’t let go! May Allah protect her. Be wary sisters. Police better get this culprit.’

Another wrote: ‘Wow please be careful when your drawing out money.’

A Met Police spokesman told MailOnline in a statement: ‘Detectives in Newham are appealing after a woman was robbed in the street. 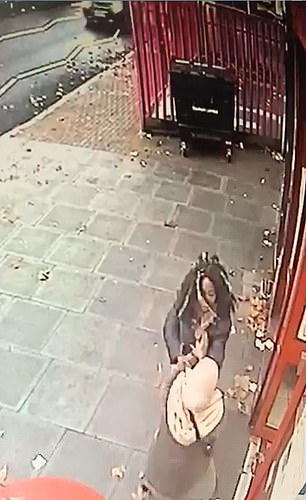 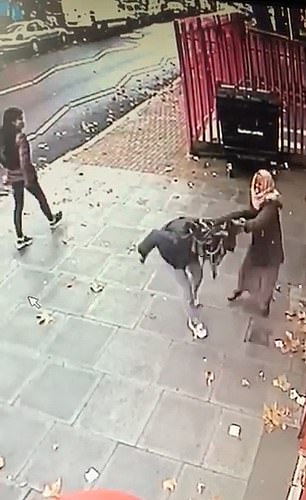 The victim, whose identity has not been revealed, is seen trying to get the woman off her, while people walk by (pictured right) and do nothing

The offence happened on Wednesday, 28 November at about 15:10hrs on Leytonstone Road, Newham.

‘The victim, a women in her early 40s, was withdrawing money from a cashpoint, while a second woman was waiting behind her.

”This second woman then approached the victim, punched and slapped her, and then stole the money she had just withdrawn. The victim did not require medical treatment.

The suspect is a black woman in her late teens. The incident was recorded on CCTV and police are releasing the images to assist in locating the suspect.’

Detective Inspector Steve Bluemore of Newham CID, added: ‘This was a shocking attack in broad daylight and we know a number of people were passing at the time. I would ask anyone who witnessed the incident or who recognises the suspect to contact police immediately.

‘Any witnesses or anyone with any information is asked to call police on 101 or contact via Twitter @MetCC. Quote CAD 4628/28NOV’