A mother who has a nut allergy ‘swelled up like a pufferfish’ and almost died when she used a lotion containing walnuts.

Gaynor Mallard suffered a reaction minutes after rubbing the pre-tanning product Black Onyx all over her body at her local beauty salon.

The 36-year-old raced back to her home in Long Eaton, Derbyshire to shower the lotion off her skin while desperately trying to call for help as her throat closed up.

Fortunately her 14-year-old daughter Frankie was off school with a sickness bug and heard Gaynor’s gasps and dashed upstairs.

Frankie found her mother collapsed in the bath and called 999 while she tried to wipe the liquid off her.

Paramedics then took Ms Mallard to hospital where she received an adrenaline injection to counter the allergic reaction.

Ms Mallard, a finance manager who lives with partner her Lewis Constantine, 35, said she owed her life to her daughter’s quick thinking.

She said: ‘I went to my local sunbathing shop and asked them which cream they thought was best to use, I was given a sachet to use.

‘I applied it in the shop but as soon as I put it on my skin I knew there was something wrong.

‘I felt my skin was itching and burning, I asked the woman at the shop if they had a shower I could use but they didn’t have one, so I put my clothes back on and rushed home.

‘As soon as I got in I took some antihistamine and usually it works but this time it didn’t.

‘I jumped into the shower and could feel my throat swelling, it was getting harder to breathe and I collapsed.

‘When paramedics got here they said they have never seen someone so red and said I looked like a pufferfish, they gave me a shot of adrenaline but it didn’t work.’ 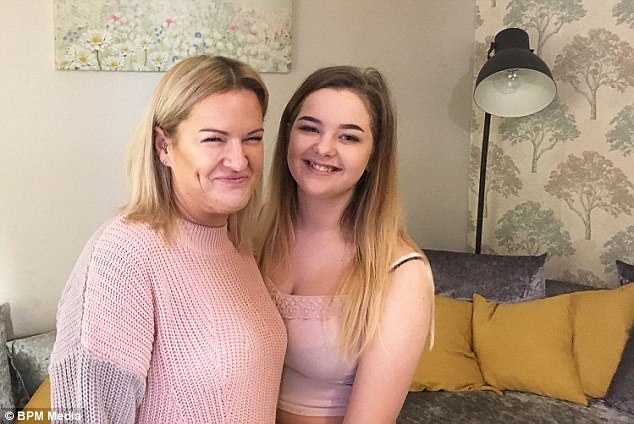 Frankie was off school and dialled 999 when she found her mother in the bath, unable to breathe

Frankie has since been awarded a Laverick Award from East Midlands Ambulance Service for her calmness during the 999 call.

Ms Mallard, who has two other daughters aged 16 and nine, added: ‘Weirdly Frankie was ill and came home early. If it wasn’t for Frankie being there I wouldn’t be alive.

‘She is really embarrassed about all the praise but I’m really proud of her, she saved me, she might use this against me now whenever she wants something but she’s my hero.’

Ms Mallard has made a full recovery since the incident on September 19 and has lodged a complaint with The Bronzing Rooms in Long Eaton where she received the sachet.

The cream she used contained ‘Juglans cinerea’, or butternut, and ‘Juglandaceae’, a type of tree extract which belongs to the walnut family. 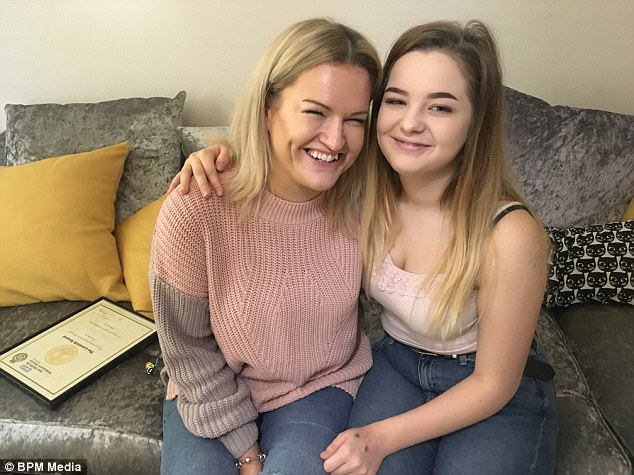 Ms Mallard said: ‘Weirdly Frankie was ill and came home early. If it wasn’t for Frankie being there I wouldn’t be alive’

She claimed the product ‘had no labels on it warning that it contained nuts’ – which the salon disputes.

Ms Malard added: ‘At my local sunbathing shop you have to sign and tell them if you have any allergies which I did.

‘When the paramedics rang the store they said they were going to put signs up warning others, but when I went back to warn them they didn’t care.

‘I spoke to lady at the front desk and was met with complete ignorance, and she said she didn’t think nut allergies were a thing.’

A spokesman for the Bronzing Rooms said: ‘We were very upset to hear about the incident with Gaynor and are pleased she has made a swift recovery.

‘Gaynor has been a long standing customer of the salon and has used tanning creams many times in the past.

‘We, the suppliers and the manufacturers, were baffled and obviously very concerned about her reaction and after speaking with her a couple of days after the incident, we chose to put up warning signs informing customers of the contents.