Woman RAMS car in front, then gets out and screams at other female driver at Irish petrol station

Road rage at the petrol pump: Watch as woman RAMS the car in front, then gets out and screams at the other female driver and throws a drink a her car at Irish fuel garage

It’s often hard to keep calm whilst driving, but a woman in Ireland took her road rage to the next level after she was caught ramming her vehicle into the car in front at a petrol station in Ireland.

Video shows the furious woman driving her silver Toyota, at speed, into the back of a female driver’s parked black Ford at the Applegreen petrol station in Duleek, County Meath.

The furious woman then got out of her car and screamed a torrent of abuse at the other driver before throwing a can of coke at her windscreen.

The can caused no damage and the aggressor angrily stomped back to her car.

WARNING: The below video contains swearing 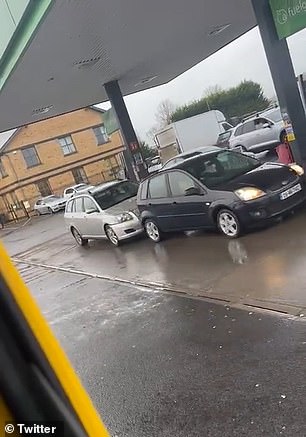 Video shows the woman driving her silver Toyota, at speed, into the back of the parked black Ford at the Applegreen petrol station in Duleek, Co. Meath 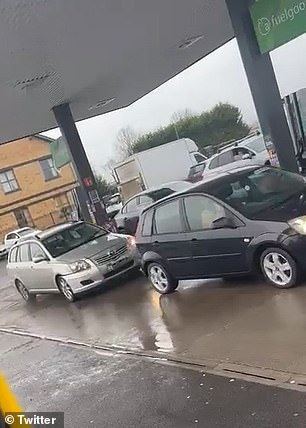 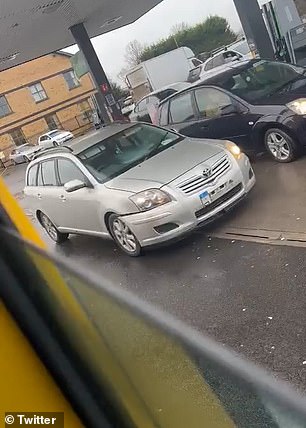 The victim can be heard screaming inside her car as she is jolted forward from the impact (left). Footage shows the woman reversing her Toyota, with its number plate now hanging precariously off the damaged bumper, backwards again before driving forwards and parking next to the victim’s car (right) 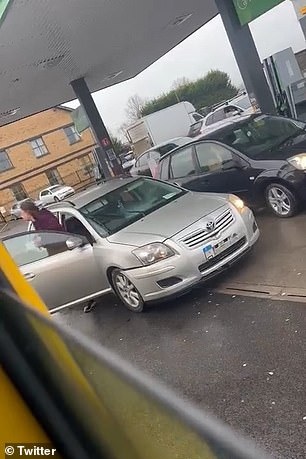 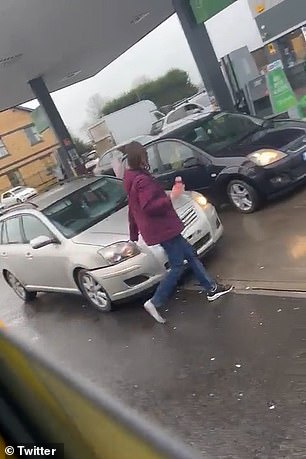 The woman, wearing a purple raincoat, is seen storming out of her car while screaming at the other female driver, before throwing a drink at the black Ford at the petrol station

The footage begins with the woman driving her car into the back of the black Ford and the victim can be heard screaming as she is jolted forward with the impact.

The woman then reverses back her Toyota, with its number plate hanging off the damaged bumper, and for a moment it appears as though she might try to ram the car in front again.

Instead she drives forwards and parks next to the victim’s car.

The woman, wearing a purple raincoat, gets out of her car while screaming abuse at the female driver. In her fit of anger, she throws a drink at the woman’s car.

She can be heard screaming: ‘I hope you still have the Gardaí on your phone. You f**ing horrible b**ch.’

The woman then leans down to the victim’s car window and shouts: ‘You horrible b**ch’. 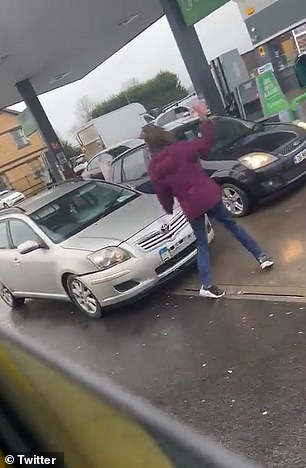 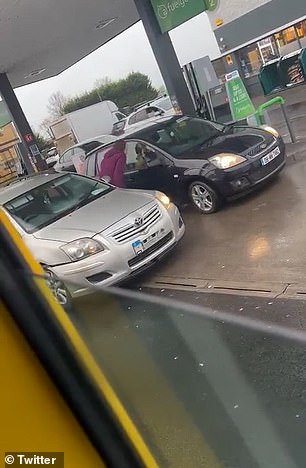 She can be heard screaming: ‘I hope you still have the Gardaí on your phone. You f**ing horrible b**ch’

The victim, who remained inside her car throughout the bizarre ordeal, can be seen calling someone on the phone as the other woman screamed at her.

The woman is then goes back to her own car before the footage cuts out.

It is not clear what started the incident, and when the footage was filmed.

An Applegreen spokesman told MailOnline: ‘This incident is a matter for the Gardaí, and as such, we cannot make any further comment.’