A grieving widow who went to the cinema with a male childhood friend has divided opinion over whether their actions were inappropriate, after revealing his wife was furious to discover they had watched a film together.

Posting anonymously on Mumsnet, the British woman explained how she visited the cinema with her pal, who she has known since the age of three and has previously gone to festivals, camping and on holiday with.

She said her friend told his wife about their trip to the cinema after it had happened – and she so furious that it almost caused the marriage to come to an end.

Responses to the post were divided, with some claiming the wife had overreacted, while others argued that the cinema is ‘an activity for couples’.

A British woman has sparked a discussion on Mumsnet about the activities that are ‘appropriate’ to do with a friend of the opposite sex. Pictured, stock image 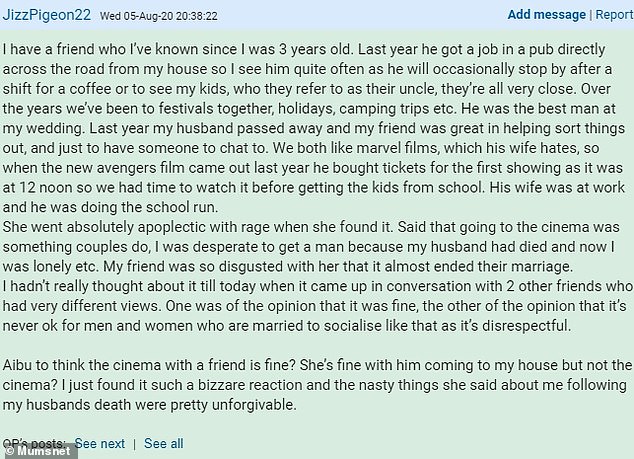 The woman explained how she visited the cinema with her pal, who she has known since the age of three and has previously gone to festivals, camping and on holiday with (pictured)

Explaining the situation, the woman wrote: ‘I have a friend who I’ve known since I was 3 years old. Last year he got a job in a pub directly across the road from my house, so I see him quite often as he will occasionally stop by after a shift for a coffee or to see my kids, who they refer to as their uncle, they’re all very close.

‘Over the years we’ve been to festivals together, holidays, camping trips etc. He was the best man at my wedding.

‘Last year my husband passed away and my friend was great in helping sort things out, and just to have someone to chat to.’

She continued: ‘We both like marvel films, which his wife hates, so when the new avengers film came out last year he bought tickets for the first showing as it was at 12 noon so we had time to watch it before getting the kids from school. His wife was at work and he was doing the school run.’

She continued: ‘She went absolutely apoplectic with rage when she found it. Said that going to the cinema was something couples do, I was desperate to get a man because my husband had died and now I was lonely etc. My friend was so disgusted with her [reaction] that it almost ended their marriage.’

The woman admitted she was stunned by her friend’s wife’s reaction, when she discovered they had gone to the cinema without telling her first.

Many users admitted they wouldn’t have had a problem with their partners going to the cinema with a female friend, adding that the marriage may have trust issues

She continued: ‘I hadn’t really thought about it till today when it came up in conversation with two other friends who had very different views. One was of the opinion that it was fine, the other of the opinion that it’s never okay for men and women who are married to socialise like that as it’s disrespectful.

‘AIBU (Am I being unreasonable) to think the cinema with a friend is fine? She’s fine with him coming to my house but not the cinema? I just found it such a bizarre reaction and the nasty things she said about me following my husbands death were pretty unforgivable,’ she concluded.

Many responses to the post reassured the widow they wouldn’t be angry if their husband had gone to the cinema with her.

One person wrote: ‘ Absolutely OK to go. The best thing in anyone’s life is a good friend. It’s a priceless thing to have. If my DH (dear husband) had a friend like that, regardless of gender, I’d let him enjoy the cinema.

‘Either you trust your spouse, or you don’t. It would not even cross my mind to think anything would happen. Maybe I’m naive.’

Another said: ‘I would be absolutely find with this. I can’t imagine being so insecure in my marriage that this would bother me. And if was, the marriage would surely be doomed anyway.’

Many people reassured the woman that they wouldn’t have a problem with their spouse going to the cinema with a friend, regardless of their gender

But others argued the wife wasn’t overreacting, and confessed they wouldn’t be comfortable if their spouse went to the cinema with a single friend of the other sex.

‘I’m so sorry for the loss of your DH (dear husband). Honestly I think I would feel similarly that you were crossing lines. I have male friends and my DH has female friends but I think where one is single and emotionally vulnerable going to do ‘date like’ things is a bad idea, however innocent the intention,’ said one.

Another wrote: ‘I think deep down any wife would feel wobbly about this. It’s just quite intimate going to the cinema together. Maybe next time the three of you should go?’.

A third added: ‘I suppose it depends on how he treats her. Does he take her out on dates? So they do things when the kids are at school? If he doesn’t do those things with his wife but he does with you, can’t blame her for being jealous.’

Others said because of her emotionally vulnerable circumstance, they wouldn’t be comfortable with their husband going to the cinema with her