An expectant mom has revealed that her in-laws insist on communicating via mouse figurines that they consider family and get visibly upset that she won’t participate in their bizarre behavior.

Reddit user Ihaveamouseproblem opened up about her tense relations with her husband’s side of the family in a wild post, revealing that each mouse has its own backstory and family relations.

The 34-year-old said she has been with her spouse for ten years, but things recently came to a head when her father-in-law said her unborn child would be his second grandchild — the first being their giant papier-mâché mouse named Timothy.

Say what? Reddit user Ihaveamouseproblem has revealed her in-laws use mouse figurines to speak to each other in a since-deleted post that has gone viral (stock image)

The mom-to-be first shared her story on the ‘AmItheA**hole’ subreddit, insisting that her story is ‘not a parody.’ She explained that she even went as far as getting a new username so no one would recognize her.

After her fellow Reddit users concluded that she was not at fault, she turned to another subreddit to seek advice on how she can improve her situation with her husband and his family.

The woman said she is ‘still very much in love’ with her 35-year-old spouse, but she was left feeling ‘lonely’ and unsupported’ after he failed to stick up for her during her recent row with his parents.

‘The relationship with his parents has been strained. They own a number of mouse figurines; they are made from different materials and one is a giant papier-mâché one called Timothy,’ she explained.

The Reddit user said the figurines are ‘seen as part of the family’ and each one of them has its own character profile with backstories, personal preferences, and family relations. 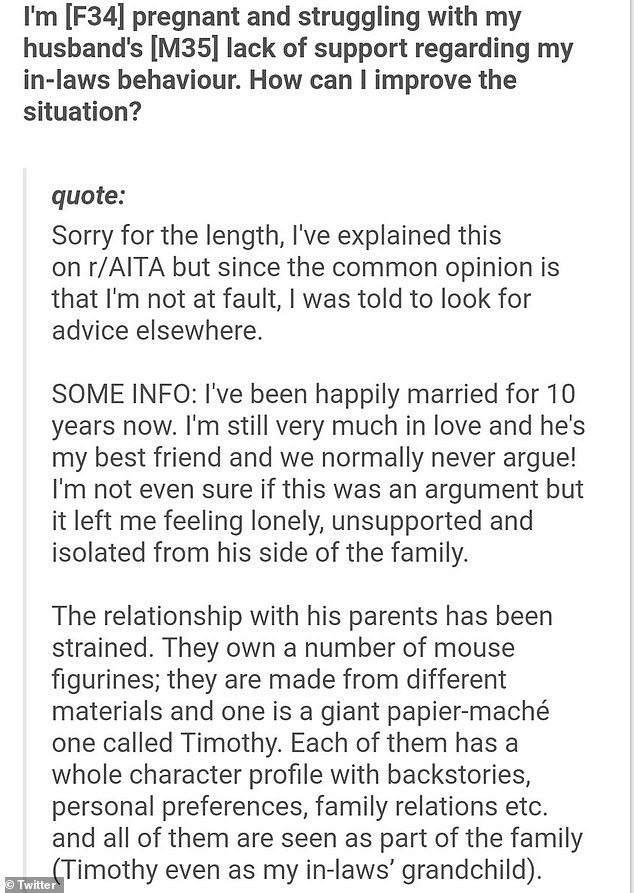 Bizarre: The 34-year-old said the figurines are ‘seen as part of the family’ and each one of them has its own character profile with backstories and personal preferences 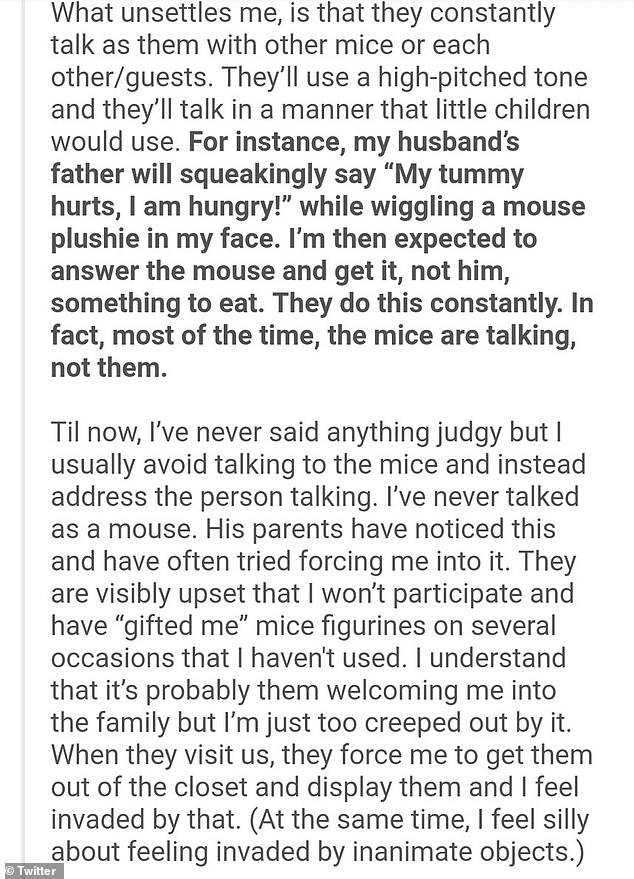 Creepy: What she finds most unsettling is the fact that they constantly speak in squeaky, high-pitched voices as the mice to communicate with each other

What she finds most unsettling is the fact that they constantly use the mice to communicate with each other and their guests.

‘They’ll use a high-pitched tone and they’ll talk in a manner that little children would use,’ she explained. ‘For instance, my husband’s father will squeakingly say, “My tummy hurts, I am hungry!” while wiggling a mouse plushie in my face.

‘I’m then expected to answer the mouse and get it, not him, something to eat. They do this constantly. In fact, most of the time, the mice are talking, not them.’

They’ll talk in a manner that little children would use

The woman insisted she has refrained from saying anything judgmental over the years, but she has made it a point to address the person who is talking and has ‘never talked as a mouse.’

‘His parents have noticed this and have often tried forcing me into it,’ she said. ‘They are visibly upset that I won’t participate and have “gifted me” mice figurines on several occasions that I haven’t used.

‘I understand that it’s probably them welcoming me into the family but I’m just too creeped out by it,’ she admitted. ‘When they visit us, they force me to get them out of the closet and display them and I feel invaded by that. (At the same time, I feel silly about feeling invaded by inanimate objects.)’

After ten years of dealing with her in-law’s strange behavior, she finally lost her cool when her father-in-law referred to Timothy as his grandchild. 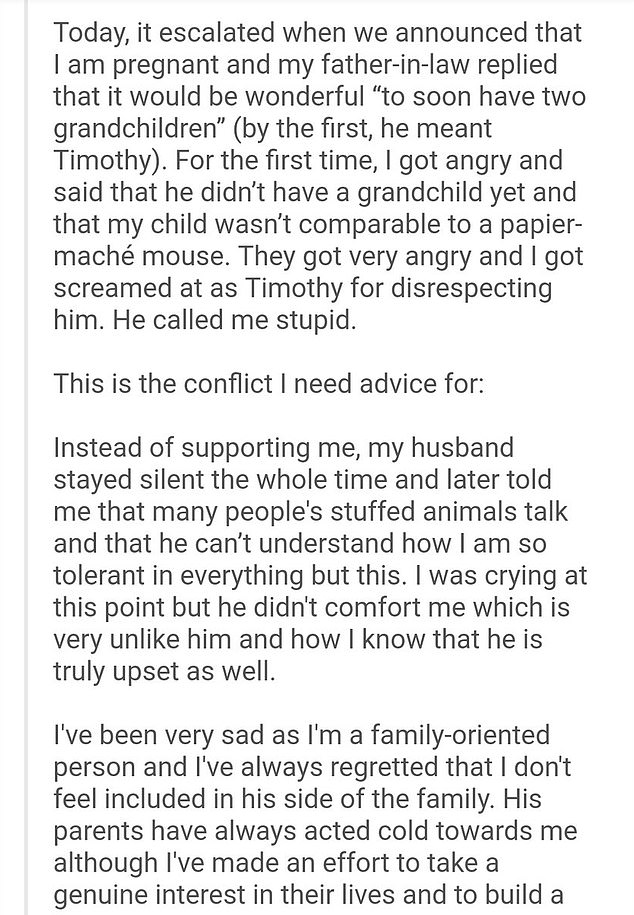 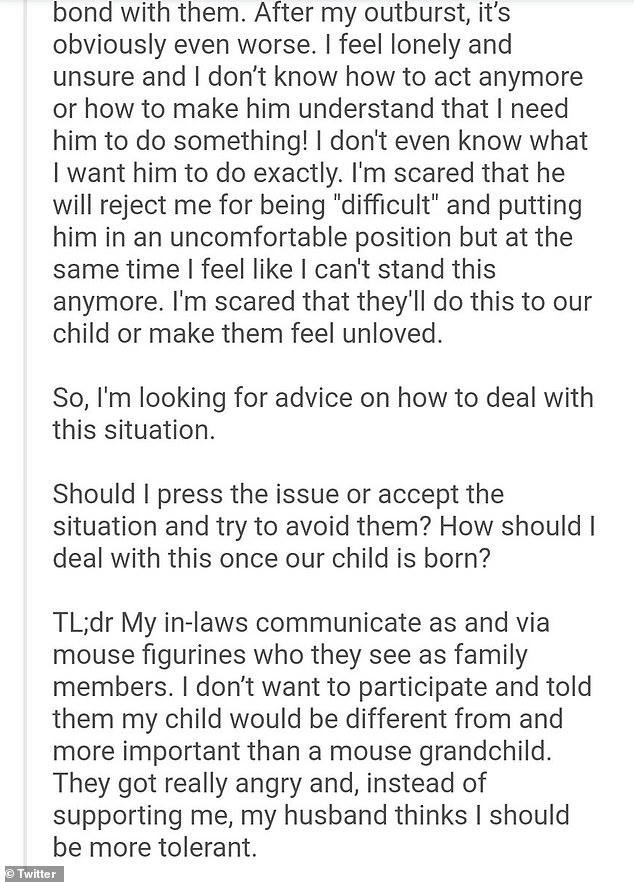 Outrage: The woman said she snapped when her father-in-law said her unborn child would be his second grandchild — the first being their papier-mâché mouse Timothy

‘Today, it escalated when we announced that I am pregnant and my father-in-law replied that it would be wonderful “to soon have two grandchildren” (by the first, he meant Timothy),’ she wrote.

‘For the first time, I got angry and said that he didn’t have a grandchild yet and that my child wasn’t comparable to a papier-mâché mouse. They got very angry and I got screamed at as Timothy for disrespecting him. He called me stupid.’

The expectant mom said the conflict was what made her turn to Reddit for advice. Not only is her relationship with her in-laws strained, but she is also upset her husband didn’t stick up for her.

‘Instead of supporting me, my husband stayed silent the whole time and later told me that many people’s stuffed animals talk and that he can’t understand how I am so tolerant in everything but this,’ she said.

When she started crying, her husband didn’t even comfort her, which is how she knows he was ‘truly upset’ as well.

‘I’ve been very sad as I’m a family-oriented person and I’ve always regretted that I don’t feel included in his side of the family,’ she explained. ‘His parents have always acted cold towards me although I’ve made an effort to take a genuine interest in their lives and to build a bond with them. After my outburst, it’s obviously even worse.

‘I feel lonely and unsure and I don’t know how to act anymore or how to make him understand that I need him to do something! I don’t even know what I want him to do exactly.’ 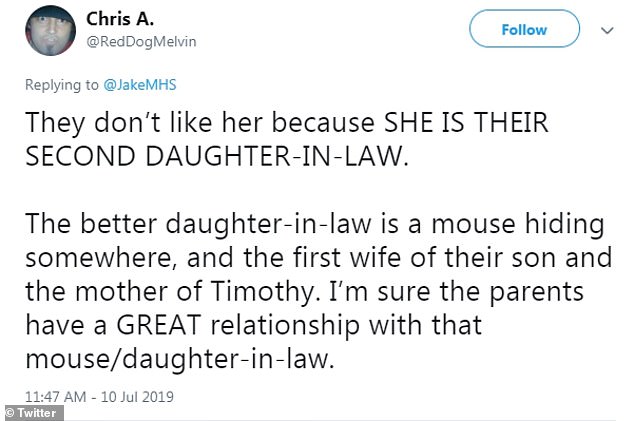 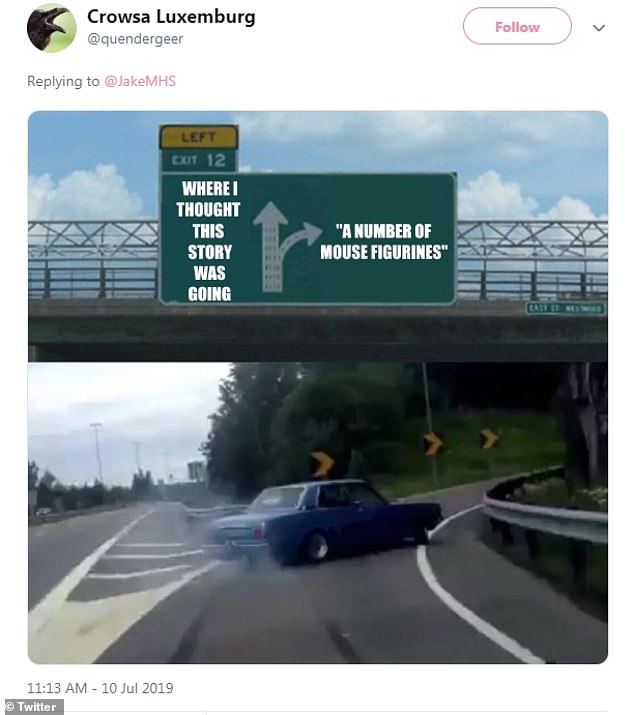 Hard to handle: Many Twitter users compared her story to a plot in a horror film

She admitted that she is afraid her husband will ‘reject’ her for ‘putting him in an uncomfortable situation,’ but at the same time, she is fed up with her in-laws’ treatment.

‘I’m scared that they’ll do this to our child or make them feel unloved,’ she said. ‘So, I’m looking for advice on how to deal with this situation. Should I press the issue or accept the situation and try to avoid them? How should I deal with this once our child is born?’

Unsurprisingly, plenty of Reddit users had questions for the woman, who answered many of them in the comments section of the post.

Some were convinced that it had to be a joke, but she insisted it wasn’t, saying: ‘They are very serious about all of it.’

She also noted that her husband ‘tries to avoid’ talking as a mouse because he knows how much it bothers her, but he still occasionally does it.

‘This is also a point of conflict,’ she explained. ‘Some childhood friends of his “play along.” He also has one half-brother that is full on in! The parents’ friends don’t participate but for some reason it is not done as much in front of them as it is in front of me.’

The woman’s viral Reddit posts have since been deleted, but screenshots were shared on Twitter by @JakeMHS, who wrote: ‘You will not regret reading this one although you might scream.’

Many Twitter users compared her story to a plot in a horror film, with one person tweeting the director of ‘Get Out,’ writing: ‘Yo @JordanPeele make this movie now.’

‘Plot twist: She gives birth to a mouse figurine,’ someone else commented.

Others insisted she had to go head-to-head with Timothy and get rid of him once and for all.

‘Timothy is a vessel of evil. He must be destroyed,’ one Twitter user commented, while another tweeted: ‘She should kidnap and murder Timothy. The in-laws will report it to the police. The police will have the in-laws committed. Problem solved.’

People also had plenty of theories about the family’s attachment to the mouse figurines and why they’ve never gotten along with the woman.

‘Therapists often use stuffed animals when trying to get children to communicate traumas that have happened in their lives because it takes the attention from them and transfers it to an object,’ one person explained. ‘This family needs to be institutionalized as they’ve taken it way too far.’

‘They don’t like her because SHE IS THEIR SECOND DAUGHTER-IN-LAW,’ someone else theorized. ‘The better daughter-in-law is a mouse hiding somewhere, and the first wife of their son and the mother of Timothy. I’m sure the parents have a GREAT relationship with that mouse/daughter-in-law.’