Brittany Cosgrove, 27, couldn’t bear to pay over $500 per week for a ‘damp, smelly and cramped’ studio apartment in Wellington, New Zealand

A young woman has revealed how she’s saving more than $20 per year after moving into an old van and turning her back on the blistering inner-city rental market.

Brittany Cosgrove, 27, couldn’t bear to pay over $500 per week for a ‘damp, smelly and cramped’ studio apartment in Wellington, New Zealand.

So instead the young business owner decided to ‘try out homelessness’ and moved into a $6,000 van she says is larger than some of the units she looked to rent.

‘The only difference is my van doesn’t have its own bathroom, or come with mushrooms and black mould in the walls,’ she told FEMAIL.

Brittany has been living in her van on and off for a year now, house sitting or crashing with friends and family when she decides she needs a break from the road.

And she has never been happier.

‘I can do whatever I want, go wherever I want and because my lifestyle has no huge expenses I can work as much or as little as I want,’ she said. 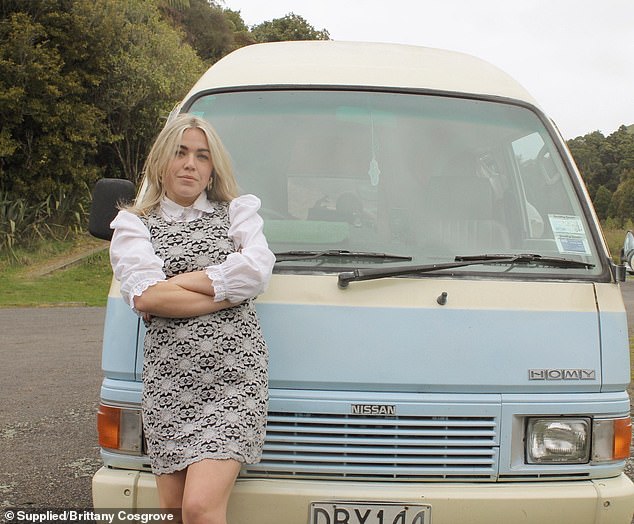 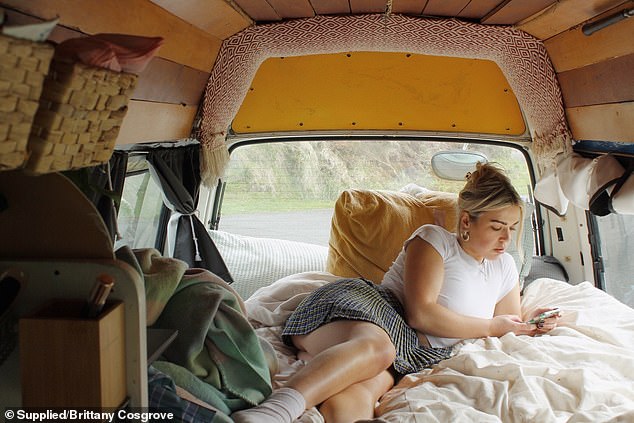 ‘Which means I can just apply for jobs I really want to do, I recently worked for a petting zoo and will go back for a few more weeks because it was so fun.’

The millennial also owns her own business, Nope Sisters Clothing, where she is the lead designer.

But explains it has been running for years so most of the work can be done remotely.

‘My manufacturers now pack and send all of the stock out so I don’t need to be in the city,’ she said.

‘And my new lifestyle is great for my brand because creative ideas come out of boredom and I have a lot of free time now.’

An average week living out of the van costs just $100, this includes registration, maintenance and the cost of ‘parking up’ as well as petrol.

When Brittany looked at apartments in her city she found almost impossible to find anything under $500 per week. Rooms in sharehouses could fetch up to $400 a week.

The 27-year-old, who has also lived in Sydney, said she no longer wanted to work full time in order to afford rent, one beer and an avocado each week. 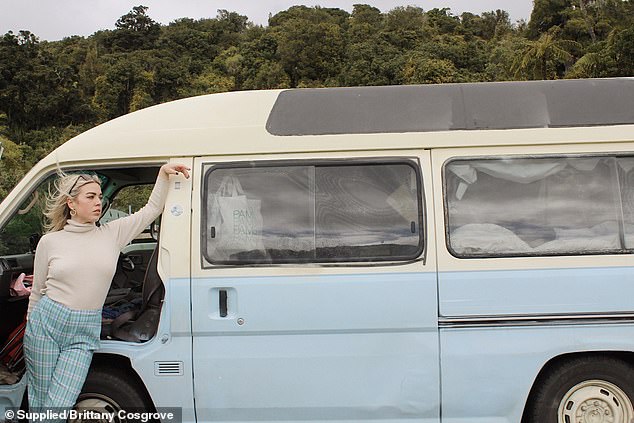 But revealed she has gained so much more than financial freedom.

‘I have so much time now, once you cut out the rent factor you can have spare money which is nice or you can have an extra day or two off a week,’ she said.

‘When you are constantly working there is no time to sleep or look after yourself properly – I don’t know how people are supposed to thrive in that environment.’

Now she feels like she is on a perpetual holiday, exploring everything New Zealand has to offer in between fun new working opportunities.

Despite being homeless the young woman says people don’t see her that way.

‘I might be living the granola lifestyle but I still look like I am heading into work in Wellington City every day,’ she said. 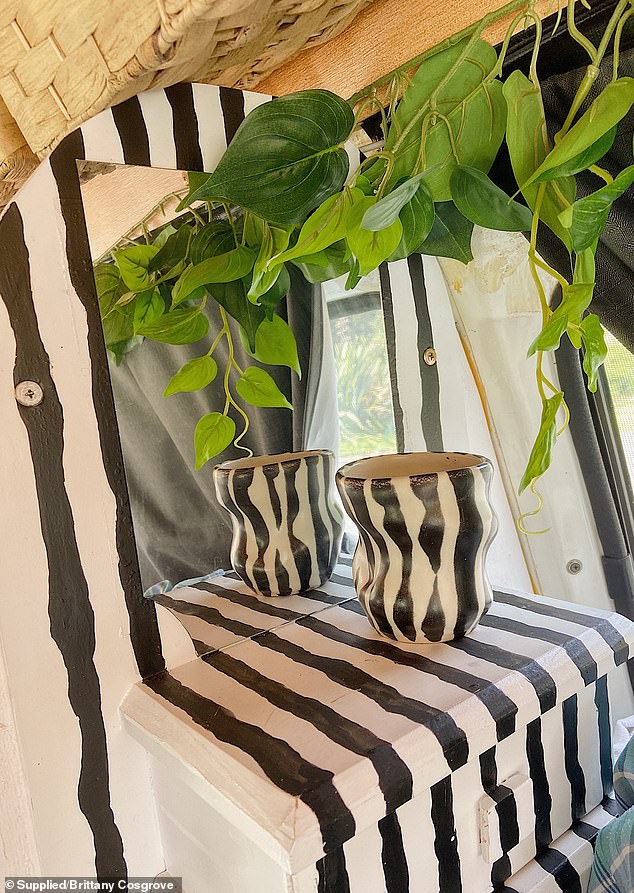 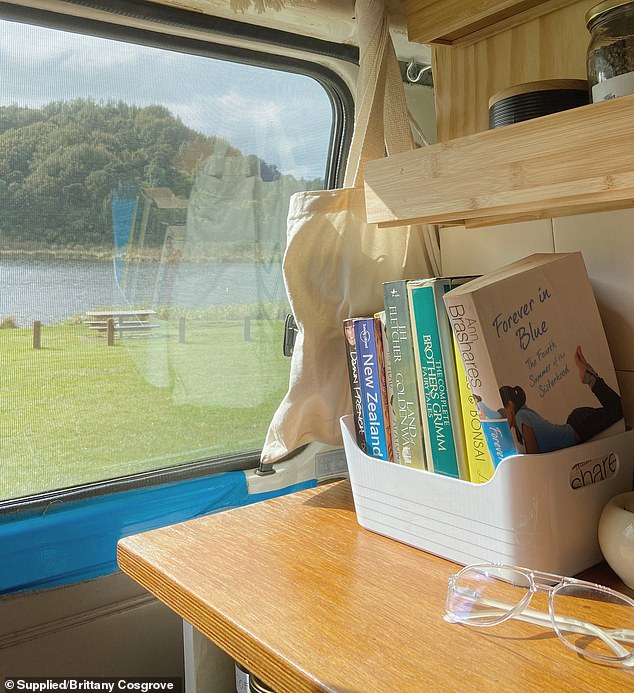 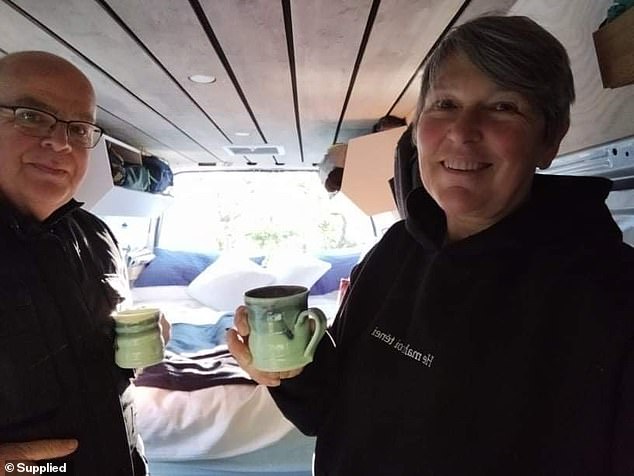 The young woman’s parents, pictured, are proud of her and have even bought their own van

When Brittan began her van-life adventure she was worried she wouldn’t be able to find enough place to shower.

But says it is really easy – and when things get desperate she can stay in a holiday park for an extra $10-$20 per night and have access to all of their facilities.

‘There are heaps of Facebook pages that point out good showers, public bathrooms and places to camp for free,’ she said,

‘For example at all of the Mobil fuel stop there are showers for truckies, I had no idea,’ she laughed.

In summer Brittany has a portable shower which she uses.

Brittany’s friends and family are supportive of her new lifestyle.

‘My parents were inspired to buy a van themselves, the were forever borrowing mine for weekends away and just took the plunge.’

The first time Brittany saw her van she fell in love, despite it being a bit older than she would have liked.

The 1991 Nissan has a long wheel base and high top which means there’s plenty of room to move around.

1 – When you first get your van you should do a short trip before you head off permanently. After a week away you will notice things you want to tweak and have a better understanding of how things should be organised to suit you best.

3 – Learn how to make a lot of one-pan dishes – don’t expect to be cooking lux meals for yourself  because you won’t be doing that.

4 – Give yourself extra time every day to sort out your life – for example if you know you need to have a shower then you may need extra time to get to the facilities.

5 – keep everything tidy – this makes life easier – but it is your van if you want it messy that’s ok. 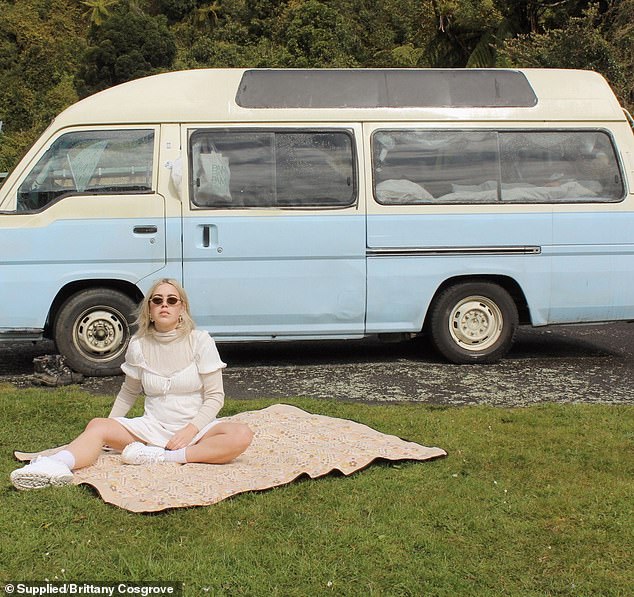 Brittany says her van is a bit slow up hills, especially given New Zealand’s steep terrain

‘It runs fine but because she is such a big girl going up hills can be slow, especially in New Zealand people get trapped behind me,’ she laughed.

The van was mostly set up when she bought it. Brittany went on a quick week-long trip before making her own adjustments and moving in fulltime.

It comes complete with ‘heaps of storage space’ a larger bed which coverts into a table which seats six and a kitchenette as well as a toilet.

Brittany says at this point in her life she can’t see herself ever renting again.

‘It is a lot of work to put in and doesn’t seem worth it, I find more than enough satisfaction in the van and doing some house sitting.

‘The homes I look after are way nicer than anything I could afford to live in anyway.’

What does Brittany miss most about living in a house?

Brittany says she misses having her own bathroom and shower the most.

She also misses not being able to hoard clothes – because the van isn’t bog enough for 35 pairs of shoes.

In winter it can get cold but ‘it isn’t anything a few blankets can’t fix’.