A woman whose sister was stabbed to death over an argument about a love interest has shared a glimpse into her sibling’s final moments, documenting her last hours of life through her phone.

Serena Recalde, 26, from Bakersfield, California, tragically lost her sister Angelina Betz in 2020 when she was murdered just two weeks before her 26th birthday.

Now, Serena  – who regularly shares videos honoring her late sister on TikTok – has posted a harrowing look at the events that led up to the brutal attack via the contents of Angelina’s phone, sharing everything from her last selfies to her final call to 911.

In a recent video, Serena explained that the device was just returned to her family by police, two years after the attack that claimed her sister’s life – and just months after Angelina’s killer was sentenced to eight years and eight months in prison by a judge.

‘POV: It’s been over two years since your sister was murdered, and you finally got her phone back from the police,’ she captioned the video.

‘You see a glimpse of her last days, hours and minutes.’

A woman whose sister, Angelina Beltz (pictured) was stabbed to death has revealed the moments leading up to her death as her sister, Serena Recalde, shared photos from her phone 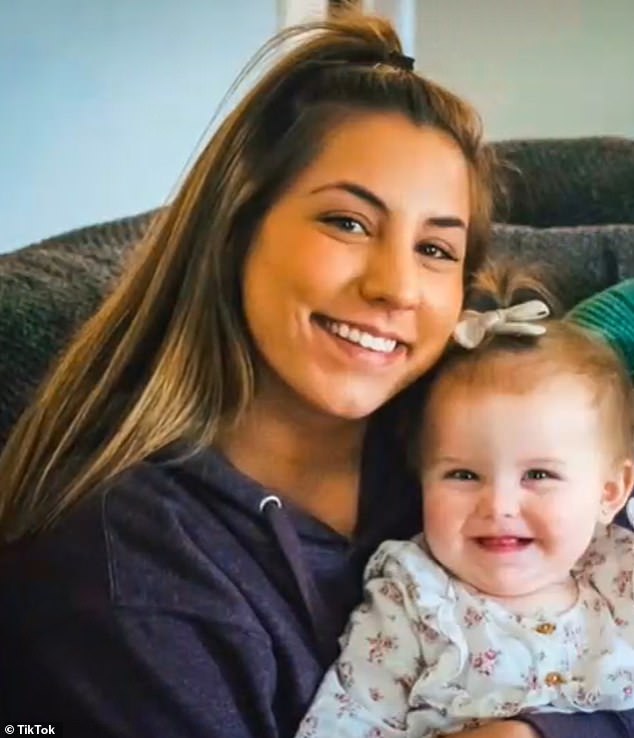 Angelina, from Califronia (pictured with her niece)  died two weeks after her 26 birthday and her sister has taken to social media to share a glimpse of Angelina’s last moments alive 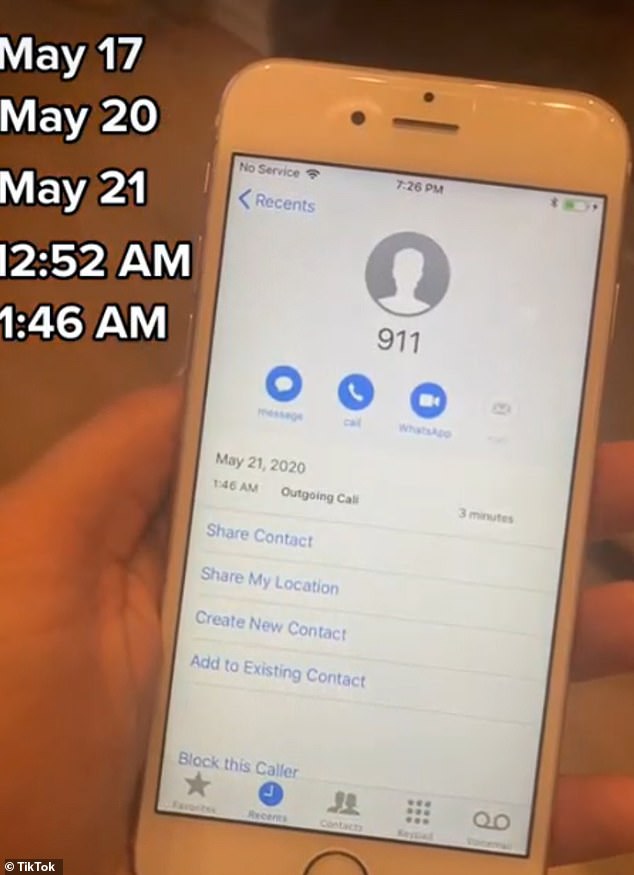 On May 21, at 12:52 AM, less than one hour before her death, Angelina captured another flick of herself smiling, unknowing what was to come.

The video ends by with Serena showing a photo of Angelina’s last plea for help.

In the caption of the video Serena described receiving her sister’s phone was extremely difficult.

She captioned the video:  ‘The part of losing someone that no one talks about. Cleaning out their home, getting their phone, figuring out what you’re supposed to do with it all.’

In the comments section, she clarified that her family and her wouldn’t be ‘wiping’ or ‘getting rid’ of Angelina’s phone.

She added that she made the difficult decision to go through Angelina’s phone because she felt as though was ‘ready’ to do so and wanted to save her ‘mother’ from the heartbreak of see Angelina’s final moments through her phone.

It was later revealed that Angelina’s murder had been at the hands of a scorned woman who had a romantic interest in the same man as the 26-year-old.

An anonymous witness, who lived with Jennifer, told police he and Angelina drove to Jennifer’s home because she owed him money.

He made his way into the home to get the money from her, but, when Jennifer learned Angelina was with him, she went outside and charged at Angelina, fighting with her ‘over a relationship with a male,’ according to court documents.

The witness said he saw the terrifying moment Jennifer stabbed Angelina with a knife.

Another witness told police the only Jennifer and Angelina were the only two fighting and after being stabbed multiple times, Angelina was left unable to stand. 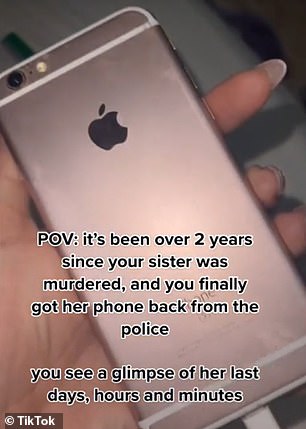 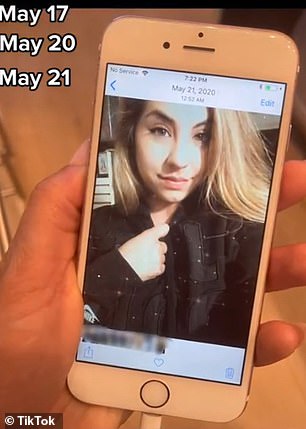 On May 21, at 12:52 AM, less than one hour before her death, Angelina captured another flick of herself smiling, unknowing what was to come 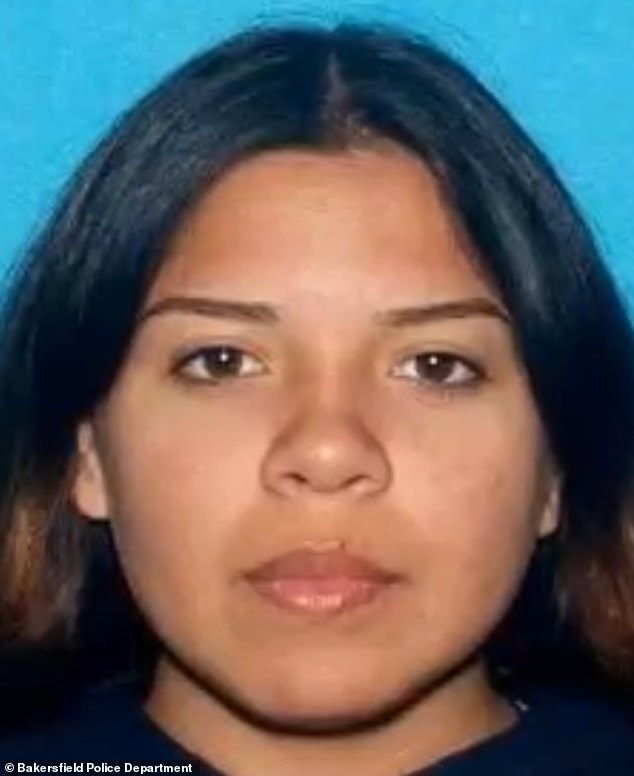 Angelina was murdered by Jennifer Maldonado, 21, after Jennifer charged at her ‘over a relationship with a male’ 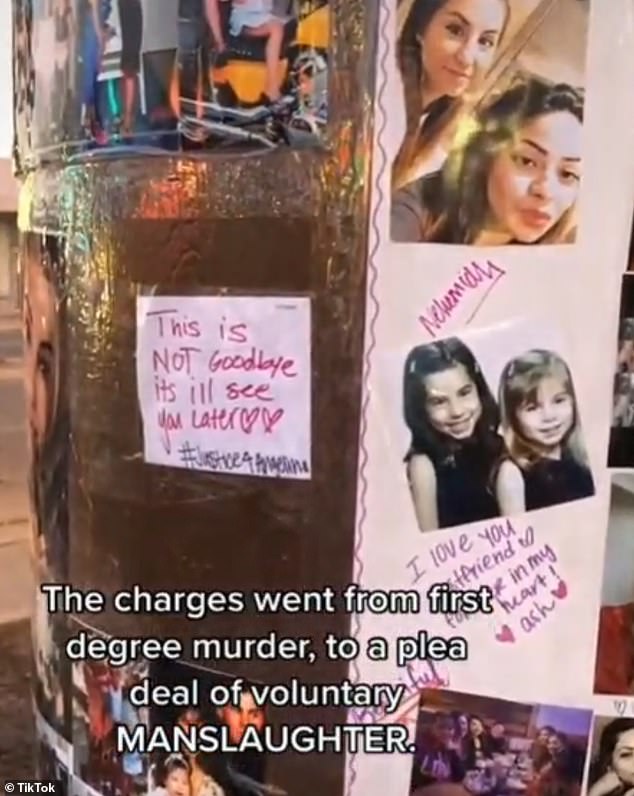 A witness told police he saw the terrifying moment Jennifer stabbed Angelina with a knife in on her left leg, fatally severing her femoral artery

The witness attempted to drive Angelina to a hospital but crashed at an intersection, according to the report.

After the coroner identified the woman involved in the car crash as Angelina, police said it appeared as she had died as a result of the stab wounds and not the collision.

However, the one witness who saw Jennifer stab Angelina refused to a sign a lineup after positively identifying Jennifer.

Jennifer became the prime suspect for Angelina’s arrest, however she evaded arrest for eight months until she was finally caught by the US Marshalls.

Jennifer was arrested and charged with first degree murder on June 20, 2021.

After Jennifer’s arrest, Serena, her family and friends of Angelina were hopeful justice was finally being brought to their loved one.

However, when Jennifer entered a plea deal of no contest to voluntary manslaughter, assault and carrying a concealed knife in connection to Angelina’s death and was sentenced to only eight years and eight months in prison, their hopes were crushed.

They were left stunned, confused and furious the sister’s killer would be released from prison by the time she was 30-years-old. 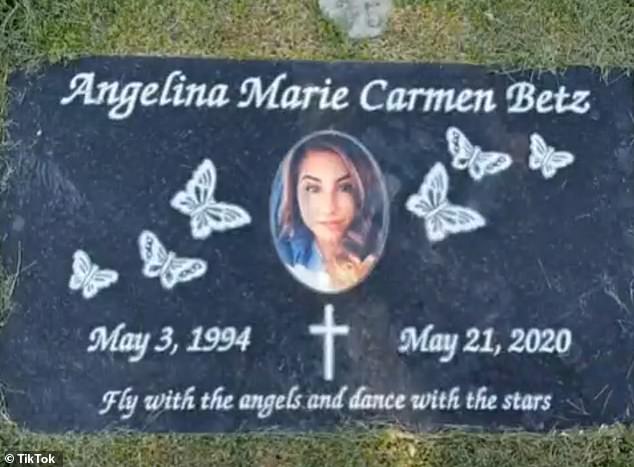 Jennifer became the prime suspect for Angelina’s arrest, however she evaded arrest for eight months until she was finally caught by the US Marshalls 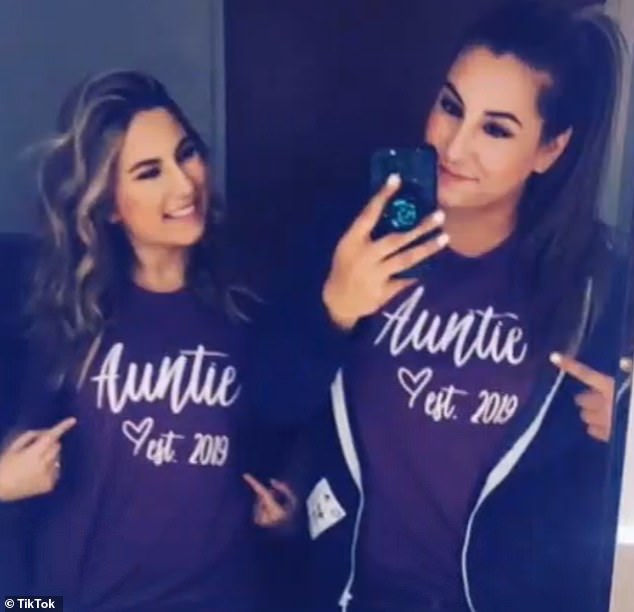 After Jennifer’s arrest, she entered a plea deal of no contest to voluntary manslaughter, assault and carrying a concealed knife in connection to Angelina’s death 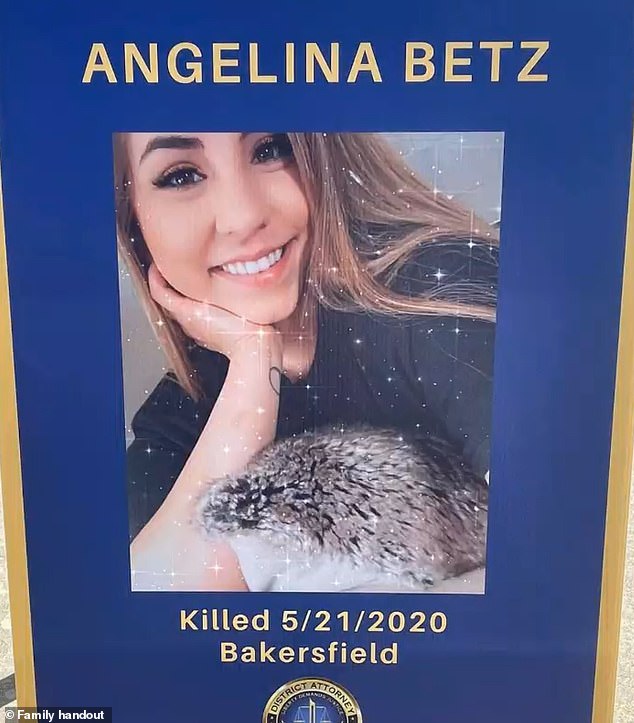 ‘I know, I want to believe that they did everything they could, but it’s hard to believe given what we’ve been told this whole time.

‘You see it on the news about people getting short sentences and you don’t think it’s going to happen to you and when it does, it’s just a weird feeling,’ Serena told 23ABC News.

‘The evidence in the case was complicated by uncooperative witnesses, conflicting witness statements regarding the circumstances surrounding the fight and fatal stabbing,’ he told Bakersfield News.

He described Jennifer had stabbed Angelina three times with ‘some type of knife’ and Angelina died before emergency personnel arrived.

Kinzel explained the plea deal was made in consideration of the challenges brought by evidence in the homicide case and Jennifer’s lack of criminal history.

Judge Colette Humphrey read victim impact statements prior to sentencing Jennifer, and explained that the District Attorney’s office decided to give her a plea deal because of the difficulties that come with proving intent to kill during a fight.

‘It’s not that the DA doesn’t feel your pain also … but they have to look at what’s going to be the possible outcome at trial,’ Humphrey said in the courtroom. 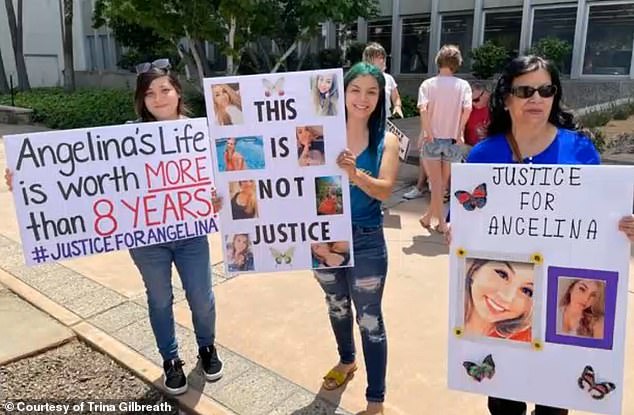 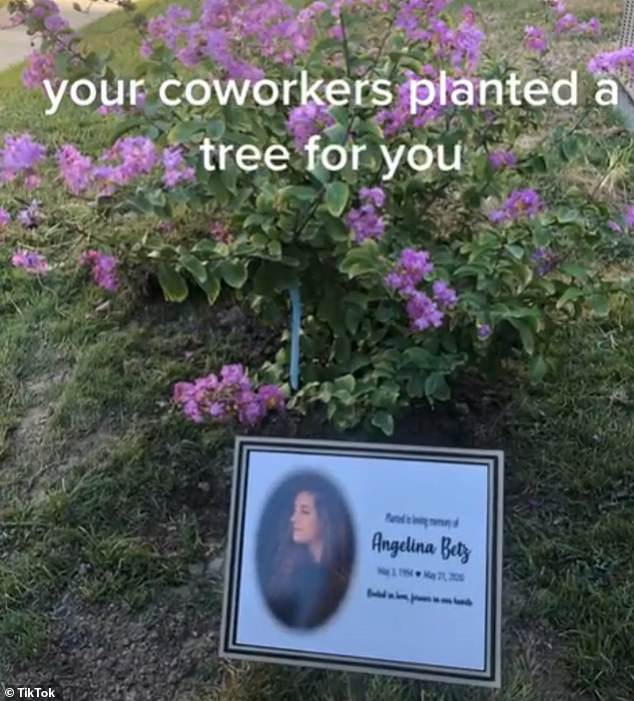 Serena told Bakersfield News that the death of her sister had forever changed her life, explaining that she fears for her children when they play outside 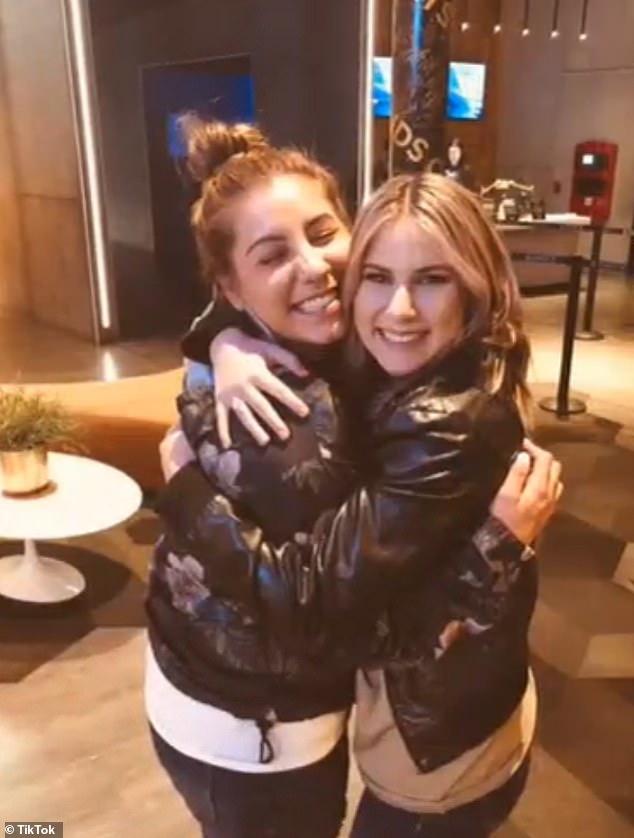 Angelina’s loved ones describe her as a caring, funny and outgoing person who loved everyone she met

Serena, friends and Angelina’s younger sister, Holly O’Conner, 21, protested the deal by holding signs that read ‘Angelina’s life was worth more than eight years’ and ‘Justice for Angelina.’

Angelina’s loved ones are suffering from the pain of losing their friend, daughter and sister every day.

Serena told Bakersfield News that the death of her sister had forever changed her life, explaining that she now faces anxiety when driving a car and fears for her children when they play outside.

‘There’s no way for anyone to understand how Jennifer [Maldonado] ruined my life.’

The two sister’s take pride in sharing Angelina’s story with others, while they hold onto to the memories they shared with their selfless sister.

Angelina’s loved ones describe her as a caring, funny and outgoing person who loved everyone she met.