A woman has opened up about how she discovered a love for weightlifting after leaving an abusive relationship, revealing that she continued to deadlift 225 pounds up until the day she gave birth.

Yanyah Milutinovic, a 33-year-old personal trainer and online coach from New York, grew up playing sports, but she developed unhealthy habits and turned to eating junk food and alcohol after spending five years with her abusive ex.

After looking in the mirror and realizing her 175-pound body looked ‘unrecognizable’ to her, she vowed to change her life. Her new drive to become fitter and healthier became her therapy to overcome the abuse she went through.

Then and now: Yanyah Milutinovic, 33, from New York, went from 226 pounds to 145 pounds after giving birth 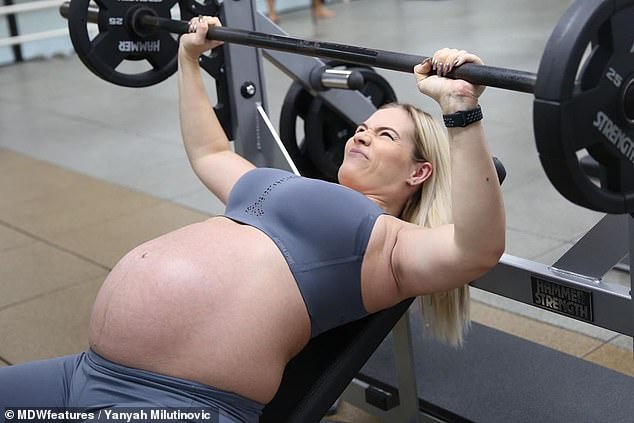 Dedicated: The mom worked out up until the day she went into labor at 41 weeks pregnant

Yanyah said she was an active child and started playing soccer when she was just four years old. She also swam, played basketball, and was a sprinter, but she excelled in karate.

She won the Open World Cup for Children and Cadets when she 15 years old; however, she quit the sport just a year later.

‘After stopping karate at the age of sixteen, I didn’t do any sports or physical activity at all until I picked up fitness at the age of twenty-eight,’ she said.

‘During that break I began living a pretty unhealthy lifestyle: long nights out drinking in clubs, poor eating habits, and terrible sleep routines.

‘I had also left a five-year-long extremely abusive relationship,’ she recalled ‘I had my head cracked against a Jack Daniels bottle, both of my eyes and mouth burst open.

Throwback: Yanyah grew up playing sports, but she developed unhealthy habits after being in an abusive relationship for five years 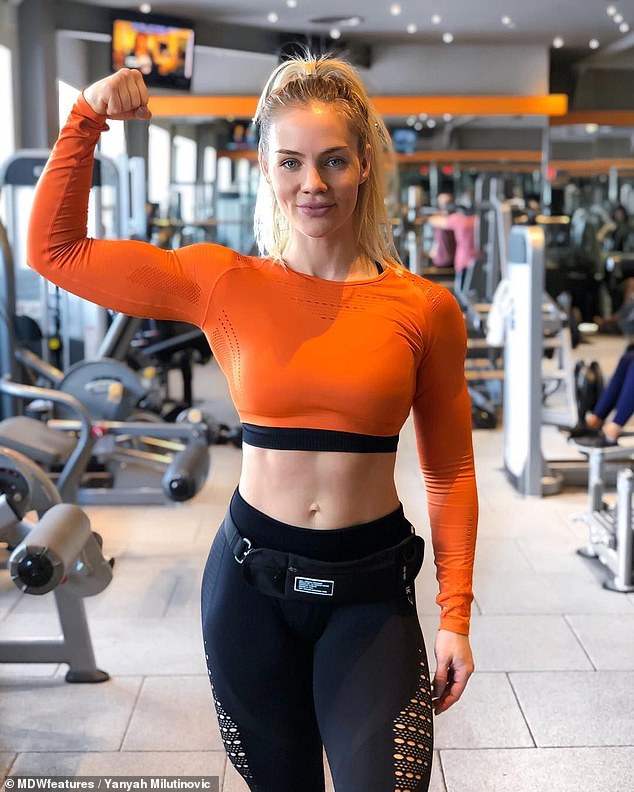 Ripped: After looking in the mirror and realizing her looked completely ‘unrecognizable’ to her, she started hitting the gym six to ten times a week

‘He would choke me under a cold shower, he would slam my face into a plate of food, slam my head into the brick wall, hold me down and beat me with his fists.’

Whens she finally left the relationship, Yanyah turned to alcohol and started drinking more than usual.

‘One morning, hungover as usual, I stopped by the mirror in the living room and I looked at my reflection,’ she said.

‘I stood there for what felt like a lifetime, staring at myself deep into my eyes. Finding my soul. In that moment I understood that despite leaving him, I still hadn’t left the abuse because I was my own abuser now. 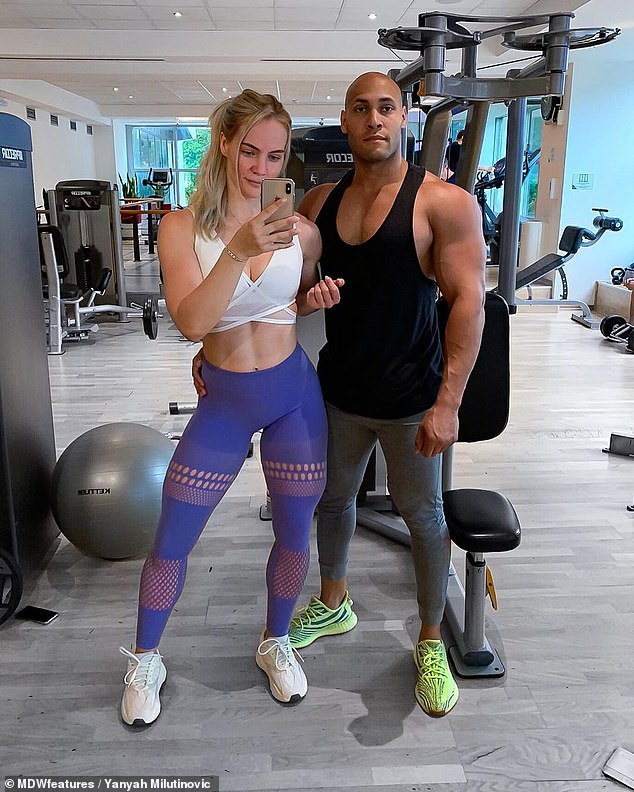 Love: Through her dedication to the gym, she met her husband, Risel Martinez (pictured), who became a strong source of support for her throughout her recovery 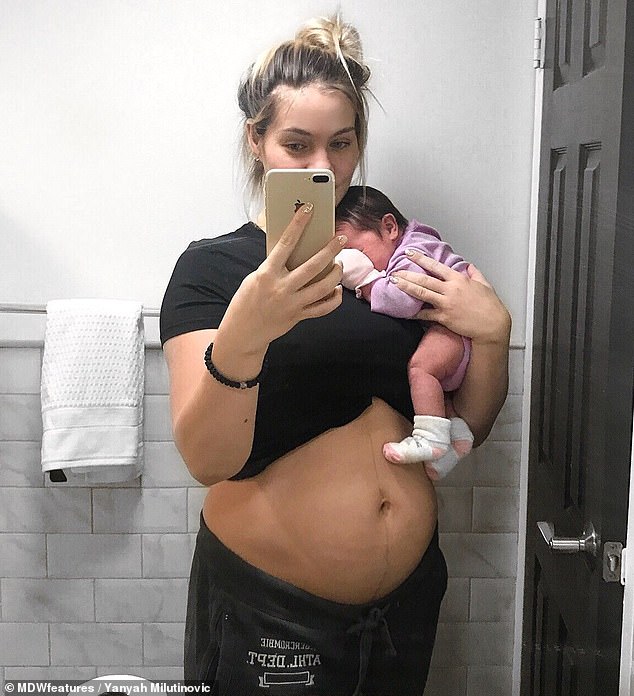 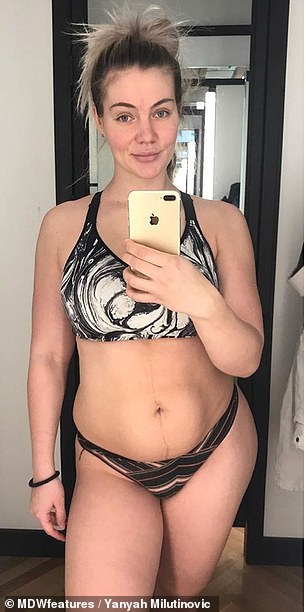 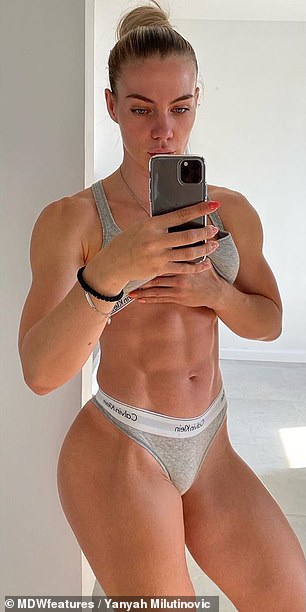 Outlet: Yanyah stuck to her gym routine throughout her pregnancy and after she gave birth

‘That day, I said “no more,”‘ she recounted. ‘I washed my face from the night before and got ready for the gym. That was the beginning and I haven’t stopped since then.’

She set up a membership with her nearest gym and began working out religiously six to 10 times a week.

In 2016, through her dedication to the gym, she met her husband, Risel Martinez, 30, who became a strong source of support for her throughout her recovery.

‘I met my husband at the gym; he is my biggest supporter, not just in my fitness journey but the overall journey of life,’ she said. 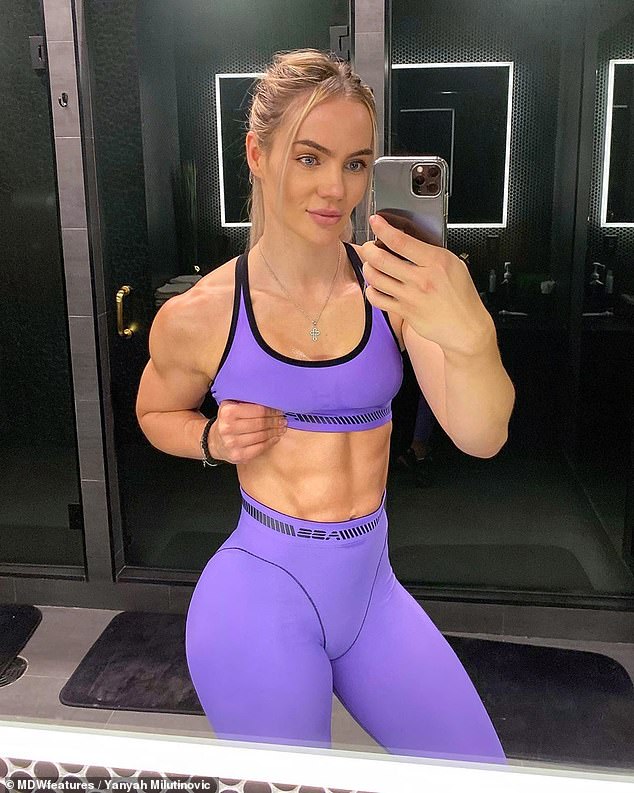 Strong: Yanyah continued to deadlift 225 pounds for 12 reps up until the day she went into labor when she was over 10 months pregnant 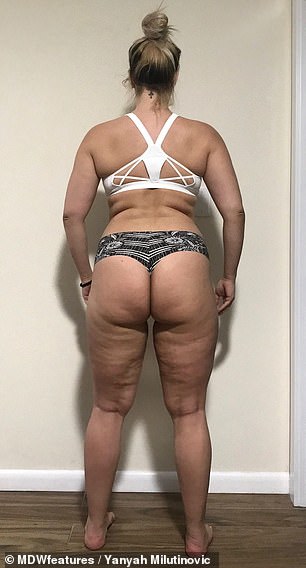 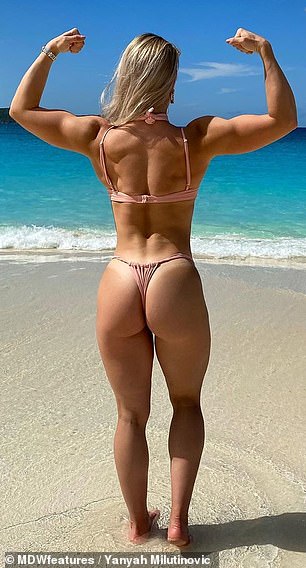 Before and after: At her heaviest, the mom weighed 226 pounds, but she managed to lose over 14 pounds just two months after she gave birth

Yanyah was determined to stick to her gym routine, even as her body started to change. She continued to work out, but she cut back her time at the gym to just three to five times a week.

‘I was nauseous all the time until my eighteenth week of pregnancy with all day sickness,’ she recalled. ‘Working out made me feel overall better, but it was mentally difficult to get to the gym some days. That’s where discipline came into play.’

She noted that her supportive husband didn’t miss any of her workouts during her pregnancy, and he was at every single one of her doctor’s appointments.

The expectant mom continued to deadlift 225 pounds for 12 reps up until the day she went into labor at 41 weeks.

At her heaviest, she weighed 226 pounds, but she managed to lose over 14 pounds just two months after she gave birth.

Looking back: Yanyah said she struggled with postpartum depression during her fourth trimester and working out was crucial for her mental well-being

Her fitness motivation continued, and once she was back to her usual routine, she returned to lifting weights four to six times a week.

‘Risel and I would take turns staying with the baby so that we could work on ourselves,’ she explained. ‘Dealing with postpartum depression (PPD) during my fourth trimester meant that working out was not only crucial for my own mental well-being but the overall well-being of our family.

‘I would feel so much better after a workout where I was able to release stress, anxiety and emotional pain.

‘At ten months postpartum, I lost my younger brother, which made the PPD overlap with grief. Yet another very difficult time in my life where my husband and his amazing family stepped in to support me.’

Yanyah said she wanted to try a different approach to getting in shape after she gave birth to her daughter. 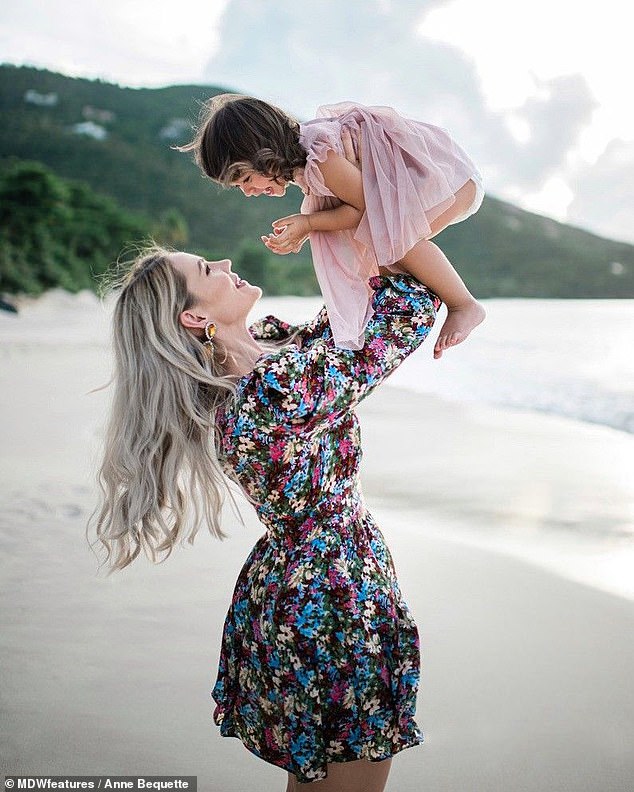 Setting the record straight: ‘Pregnant women are a lot more powerful than what society wants us to believe,’ she said

‘I didn’t want to focus and spend hours and hours doing cardio,’ she said. ‘As a matter of fact, in the first one and a half years of postpartum I didn’t do any cardio at all.

‘My focus was on maintaining and rebuilding my body weights. The weight loss of fat would eventually happen anyway with intense weight training but in this way, I was able to “save” the hard-earned muscle mass and build my body stronger and better than even before falling pregnant.

‘Pregnancy is not a disability — at least in most cases — and as women, pregnant women are a lot more powerful than what society wants us to believe.

‘There is no animal in the animal kingdom that takes a break during the time they are pregnant,’ she noted. ‘For an example, the lioness hunts with the rest of the herd until the day she gives birth.

‘We were created to move, and if physical activity is healthy when you’re not pregnant, why would it now turn into something unhealthy during the most important time in most women’s lives?

‘But the most important thing to know is that all fitness levels are different before pregnancy and the same goes for during pregnancy. You should get a green light from your doctor first before beginning or continuing any fitness activity during pregnancy.’