Woman reveals she was brutally beaten by drug addict husband

A woman who was brutally beaten and ‘disfigured’ by her drug addict husband has opened up about the horrific attack in an attempt to raise awareness about domestic abuse, while issuing a warning to others in ‘toxic relationships’ to leave while they still can.

Natalie Noe, 33, suffered agonizing and ‘disfiguring’ injuries at the hands of her husband, Terrance Lee Harris, who attacked her while ‘high on painkillers’ in February 2020, leaving her with a broken nose, a fractured cheekbone, and a dislodged breast implant.

Now, Natalie, from Florida, is speaking out about her ‘toxic’ marriage to Harris, who was jailed in the wake of the attack, before dying of a drug overdose upon his release from prison, in the hopes of helping others who are struggling with their own abusive or troubled relationships.

The personal trainer first met Harris – who was known as Matthew – in 2012, and the pair embarked on a passionate romance, after bonding over a shared love of fitness and healthy living. They wed in 2014, however less than a year later, Harris’ struggle with drugs became too much for them to handle, and they divorced.

But five years later, the couple reunited and remarried when Harris asked Natalie to give him a second chance, insisting that he had overcome his addiction once and for all. ‘Blinded by love’, she agreed, only for Harris to quickly fall back into his old ways once again.

Speaking out: Domestic abuse survivor Natalie Noe, 33, is speaking out about the brutal beating she suffered at the hands of her drug addict husband to help other women 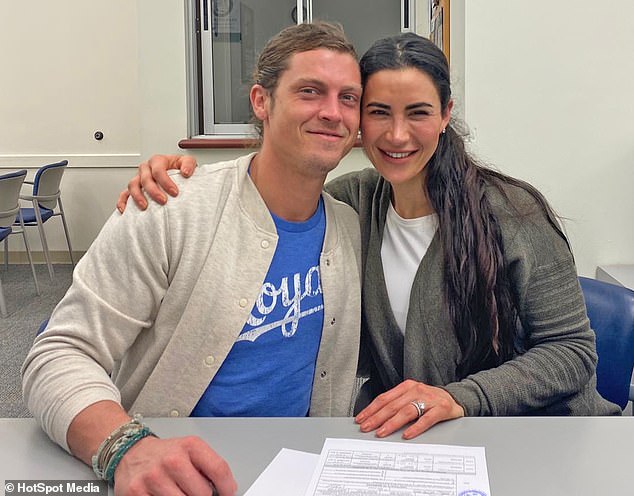 Trouble: Natalie, from Florida, first met Terrance Lee Harris in 2012, and the couple wed in 2014 – however their marriage quickly ran into trouble as a result of his painkiller addiction

Harris first opened up to Natalie about his struggle with drug addiction, which began when he was prescribed painkillers to treat a back injury that he sustained while playing football, soon after they met for the first time.

However at the time, Harris insisted to Natalie that he had conquered his demons and was living a sober lifestyle.

‘Matthew told me he’d got clean and after a three week whirlwind romance, he moved in,’ Natalie explained.

In November 2014, the pair married before relocating to Kansas City, Missouri, so Harris could work in his family business.

Then in April the following year, Natalie fell pregnant.

‘Just weeks later, Matthew grew distant. And soon after I caught him drinking,’ she revealed. ‘I told him he needed help and I was worried he’d go back to drugs.’

Sadly, Natalie miscarried when she was eight-weeks pregnant – and she says that while the loss of the baby left her devastated, it only seemed to make her husband’s demeanor all the more ‘cold’.

‘After [the miscarriage], Matthew seemed cold, relieved even. I was heartbroken,’ she shared. ‘Then the next week, he told me he didn’t love me anymore. My world collapsed.’

Natalie moved back to Florida and rebuilt her life and the couple divorced in late 2015.

Then, in July 2019, Natalie received a message on Facebook from Harris. 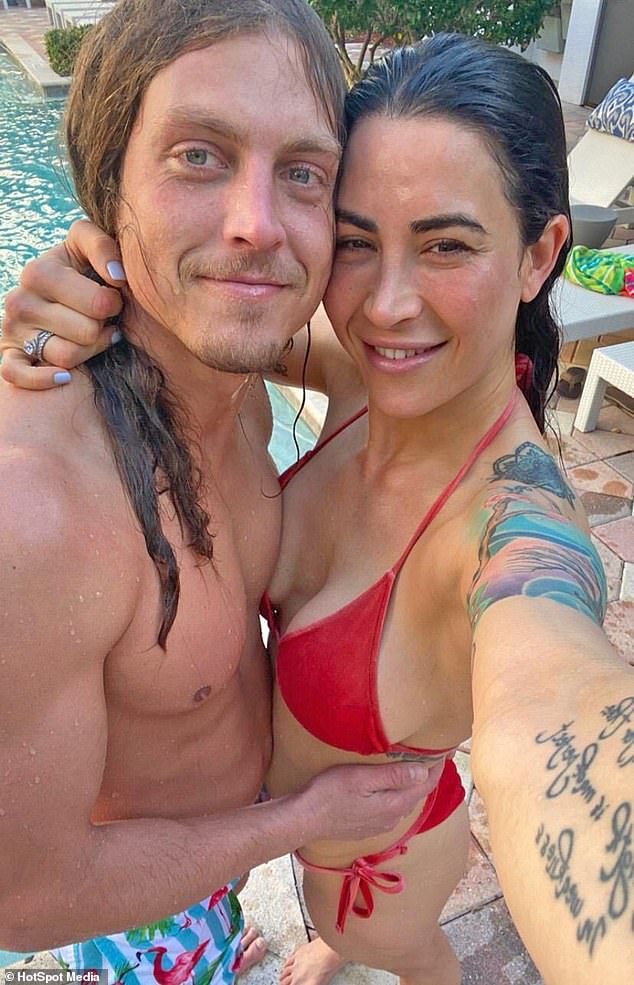 Another chance: Four years after they divorced, Harris got in touch with Natalie and asked her to give him a second chance, insisting that he had conquered his addiction once and for all 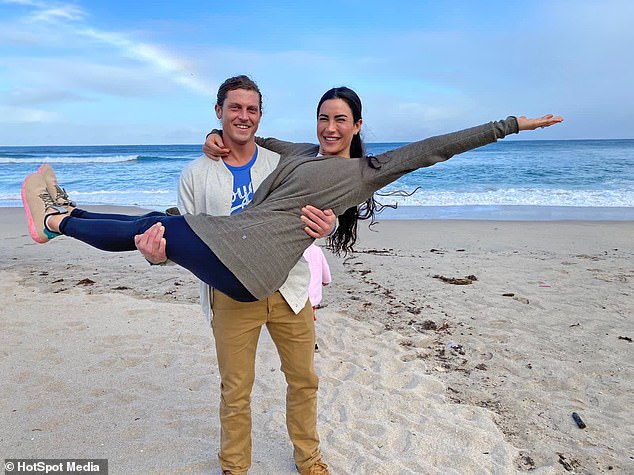 Upset: Soon after they reunited, Harris began using drugs again – but Natalie admits she was ‘blinded by love’ and couldn’t bring herself to leave him

‘He told me he was in town and was sorry and still loved me. Admittedly I really missed him,’ she recalled.

That night they met up and Harris admitted he was still using drugs. Despite all that they had been through, Natalie agreed to help him get clean, in the hopes that he could overcome his demons and make their relationship work.

Two weeks later, Harris was sober and they rekindled their romance.

Then in December 2019, Natalie underwent breast augmentation surgery and a nose job.

During her recovery, Harris looked after Natalie. But one day when she reached for her painkillers, the packet was empty – and she immediately knew that her partner had taken them.

Then, two weeks later the couple argued and Harris flew off the handle, attacking Natalie.

‘He lunged at me, grabbing my new nose between his thumb and finger and twisted it,’ she said. ‘The pain was unbearable.

‘Then he grabbed his guitar and swung it at my legs.’ 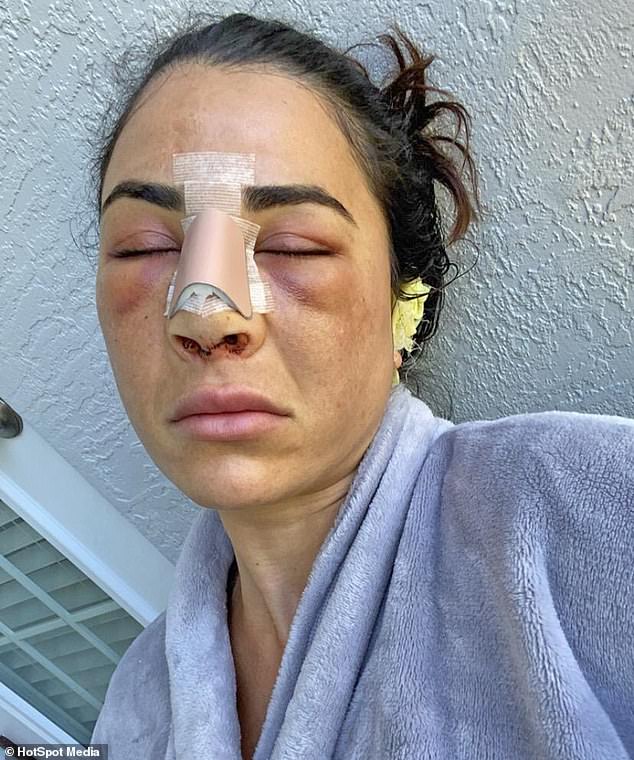 Attack: The couple remarried in January 2020, but just once month later, Harris brutally beat Natalie while ‘high on drugs’, leaving her with a broken nose and a fractured cheekbone 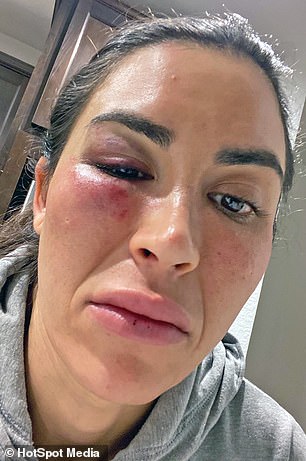 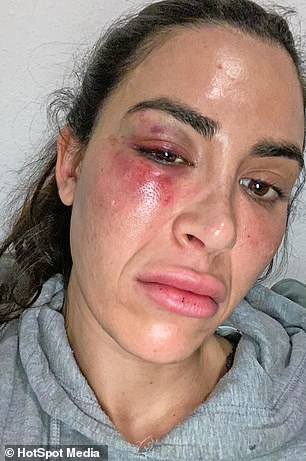 Agony: Harris also grabbed Natalie by the arm during the attack, causing her breast implant to become dislodged 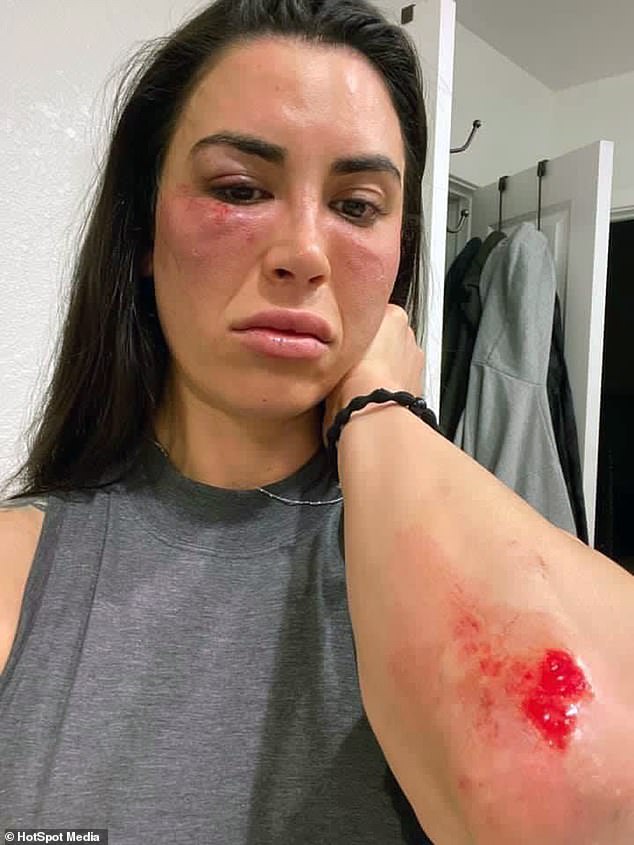 Warning signs: Natalie says Harris first attacked her in December 2019, but admits that she ‘blamed herself for provoking him’ at the time, saying that she was ‘blinded’ by her love for him

Neighbors heard the commotion and called the police, who arrested Harris was arrested, however Natalie refused to press charges.

‘Despite my nose being bruised and swollen, I was so blinded by love, I blamed myself for provoking him,’ she admitted. ‘It was like being with two different men. He could be kind and caring too.’

The couple married again in January 2020, but a month later, on Natalie’s birthday, Harris turned up to her parents’ for dinner high on drugs.

It was then that Natalie admitted to her parents that he had been arrested for beating her.

‘Embarrassed, Matthew fled and I found him at home swigging on whisky,’ Natalie shared. ‘Suddenly, he grabbed me by my hair and dragged me down the communal corridor into the car park.

‘He threw me to the ground before climbing into his car. He was too drunk to drive to I reached through the passenger window for the keys.

‘Matthew grabbed my arm and yanked it so hard I felt my implant pop out of place.

‘As I writhed in pain, he punched me hard in the nose, knocking me unconscious.’

When Natalie came around, paramedics surrounded her and Harris had fled.

In shock, Natalie refused to go to the hospital and instead went home, where she attempted to deal with her horrific injuries.

The next morning, officers told her Harris had been arrested. 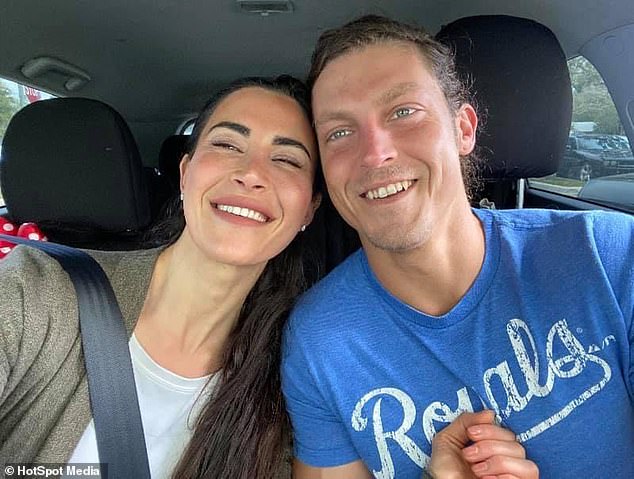 Horrifying: Then, on her birthday in February 2020, Harris beat Natalie while ‘high on drugs’, leaving her with agonizing injuries 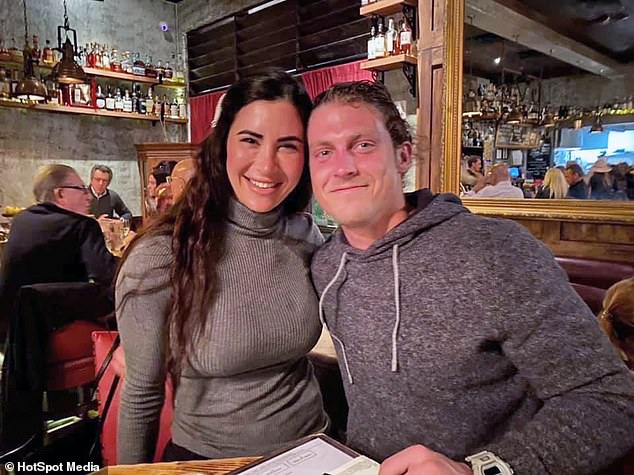 Devastating: Harris pleaded guilty to domestic battery and was jailed for 94 days. He died of a drug overdose after his release from prison in July 2020 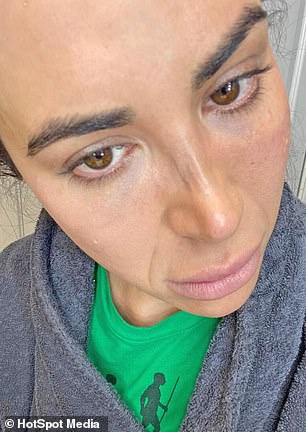 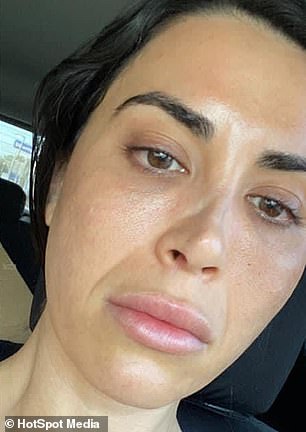 Moving forward: Natalie has spent $31,000 on reconstructive surgery to repair the damage done during the attack, and she is now sharing her story to help other domestic abuse victims

When she finally felt able to visit her doctor, Natalie was given a shocking diagnosis:  ‘He told me I’d suffered a broken nose, a fractured cheekbone and that my implant had been dislodged.

‘I couldn’t believe my husband had done this.’

Harris pleaded guilty to domestic battery and was jailed for 94 days.

Natalie says: ‘It was a pitiful punishment for the pain he’d caused me.

‘My nose had collapsed, leaving me disfigured.’

Meanwhile, surgeons harvested cartilage from Natalie’s ear, ribs and scalp to rebuilt it.

She had her breast fixed too and used a credit card to cover the $31,000 cost of her reconstructive surgery.

Then, in July 2020, Harris died of a drug overdose just days after his release.

‘Despite everything Matthew had done to me, I was immensely sad that he couldn’t beat his demons and this was how it had ended for him,’ Natalie said.

‘But our marriage was based on lies. He was a drug addict and I couldn’t save him in the end. His attack left me disfigured and I’ve had to fork out thousands to fix my face.

‘It was very sad that he took his own life. His demons got too much for him.

‘Now I want other women to know that you won’t be able to change a partner who has addiction problems.

‘It’ll only get worse. Please leave a toxic relationship. You won’t be able to save them from themselves.’