A woman was given some much-needed advice by strangers after she shared her suspicions about her boyfriend’s behaviour online.

The unnamed Mumsnet user revealed how she had grown concerned over a recent friendship her partner had struck up with a married woman he met through a running group.

After noticing a change in his routine, she checked his Facebook to discover ‘hundreds’ of messages between the pair, alongside countless emails, snap chats and a ‘large number of calls’.

Asking for advice, the user explained that she didn’t want to ‘throw away’ a nine-year relationship but that the secrecy was causing her so much stress she had moved into the spare bedroom and was struggling to sleep and eat.

The unnamed Mumsnet user revealed how she had grown concerned over a recent friendship her partner had struck up with a married woman he met through a running group. Stock image 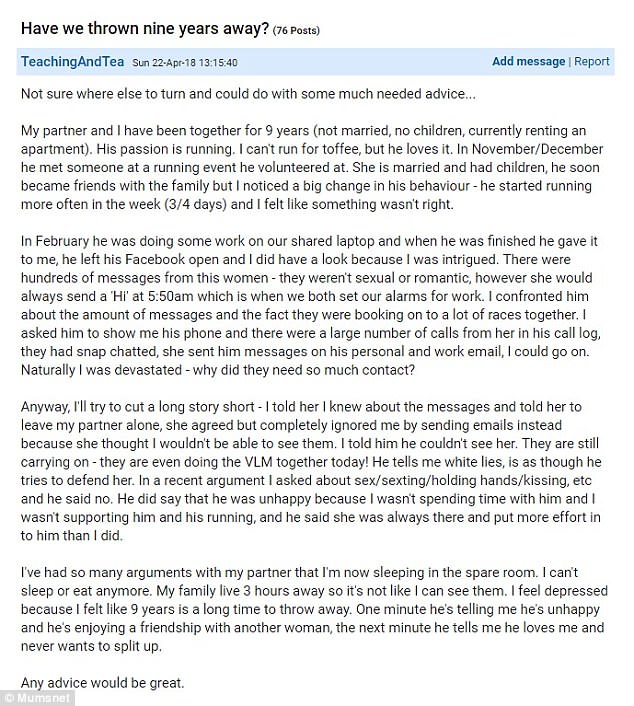 In a lengthy post, pictured, the woman outlined the suspicious behaviour and asked for advice

The post was met with dozens of responses from Mumsnet users who agreed there was something going on between the pair, with some urging the woman to leave her partner.

In the lengthy post, the woman wrote: ‘My partner and I have been together for 9 years (not married, no children, currently renting an apartment).

‘His passion is running. I can’t run for toffee, but he loves it. In November/December he met someone at a running event he volunteered at.

‘She is married and had children, he soon became friends with the family but I noticed a big change in his behaviour – he started running more often in the week (3/4 days) and I felt like something wasn’t right.’

She explained she took the opportunity to check his Facebook messages after he left his profile open on their shared laptop. 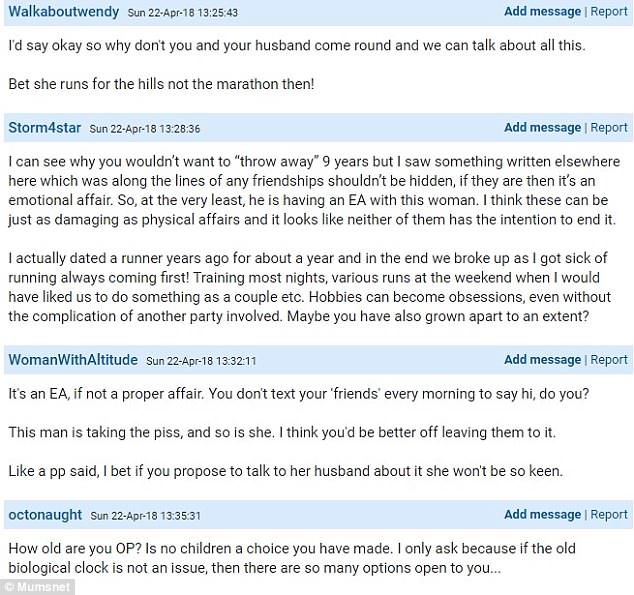 ‘There were hundreds of messages from this woman – they weren’t sexual or romantic,’ she continued. ‘I confronted him about the amount of messages and the fact they were booking on to a lot of races together.

‘I asked him to show me his phone and there were a large number of calls from her in his call log, they had snap chatted, she sent him messages on his personal and work email, I could go on. Naturally I was devastated – why did they need so much contact?’

She explained the woman had continued to contact her boyfriend even after she asked her to stop and that he had denied there was anything wrong.

She added: ‘I feel depressed because I felt like 9 years is a long time to throw away. One minute he’s telling me he’s unhappy and he’s enjoying a friendship with another woman, the next minute he tells me he loves me and never wants to split up.’ 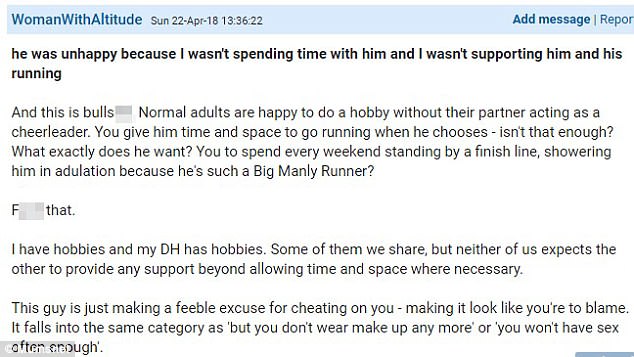 Mumsnet users were sympathetic to her dilemma but claimed the boyfriend was having an emotional affair.

One wrote: ‘I can see why you wouldn’t want to “throw away” nine years but I saw something written elsewhere here which was along the lines of any friendships shouldn’t be hidden, if they are then it’s an emotional affair.

‘So, at the very least, he is having an EA with this woman. I think these can be just as damaging as physical affairs and it looks like neither of them has the intention to end it.’

Another agreed: ‘It’s an EA (emotional affair), if not a proper affair. You don’t text your “friends” every morning to say hi, do you? This man is taking the p***, and so is she. I think you’d be better off leaving them to it.’ 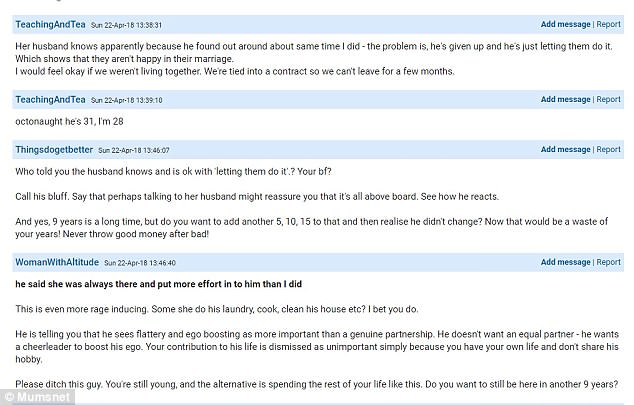 And others suggested she get the husband involved, writing: ‘I bet if you propose to talk to her husband about it she won’t be so keen.’

Meanwhile one woman expressed her anger at the partner appearing to ‘turn’ the blame on her, writing: ‘This guy is just making a feeble excuse for cheating on you – making it look like you’re to blame.

‘It falls into the same category as “but you don’t wear make up any more” or “you won’t have sex often enough”.’

And the general consensus was for the woman to get out of the relationship, with one woman concluding: ‘You’re at a fantastic age.

‘Get out now and live the life you want to live, not one where you’re having to read your boyfriend’s messages and second guess his relationship with another woman.

‘There’s a massive world out there with a lot of single men in it. Run away from this man now.’