A woman on a United Airlines flight from San Francisco to Atlanta was stung by a scorpion stowaway Thursday morning.

The woman, who has not been named, told TMZ that while the plane was in midair, she started to feel a stinging sensation on her leg.

She said that when she went to the lavatory, the stinging feeling increased – and then a live scorpion fell out of her pant leg and scuttled across the floor, until a flight attendant managed to trap it.

The scorpion was said to have stung the woman multiple times when it was inside her pants.

When the plane landed, she was treated by paramedics.

A United spokesperson told USA Today that ‘After learning that one of our customers on flight 1554 from San Francisco to Atlanta was stung during flight, our crew responded immediately and consulted with a MedLink physician on the ground who provided medical guidance.’

The spokesperson said that the passenger was taken to a local hospital and that the company has ‘been in contact with our customer to ensure her well-being.’

TMZ shared a photo of a scorpion, believed to be the one that stung the woman,  inside an otherwise empty box bearing a United logo. 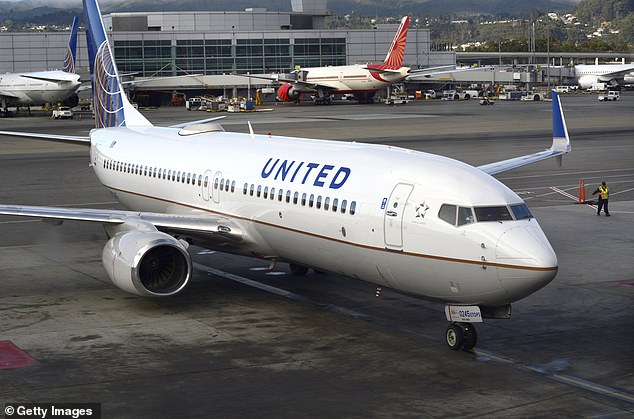 The incident took place during a Thursday morning flight from San Francisco to Atlanta. A flight attendant was able to catch the scorpion after it fell out of the woman’s pants

It’s unclear how the scorpion wound up inside the woman’s pants.

This is not the first time a scorpion has scared the bejesus out of airplane passengers mid-flight.

In February, a Lion Air passenger caught video of the moment a scorpion crawled out of the overhead baggage bin on a flight from Riau to Banten in Indonesia, according to the Straits Times.

Also in February, a scorpion stung a woman on an Air Transat flight from Toronto to Calgary. Pictures shared by CBC showed the scorpion trapped inside a clear plastic cup after it had stung her just prior to the plane landing.