A woman has told how her GP sent her home with paracetamol for her mouth ulcers only to discover the next day she had a life-threatening illness.

Annie Lovegrove, 21, went to see a GP when a large mouth ulcer wouldn’t go away, despite a course of antibiotics.

The doctor saw sores on her tonsils and thought she had tonsillitis, so sent her home again, but this time she developed a high fever and was rushed to A&E the next day.

Miss Lovegrove, of Ipswich, was then diagnosed with aplastic anaemia, a condition in which the body doesn’t produce enough blood cells.

She has since needed 50 blood transfusions, chemotherapy and a bone marrow transplant from her younger sister to try and overcome the condition.

Annie Lovegrove, pictured before her illness, was told by a doctor she had tonsillitis and sent home but she developed a high fever the next day and was rushed to A&E 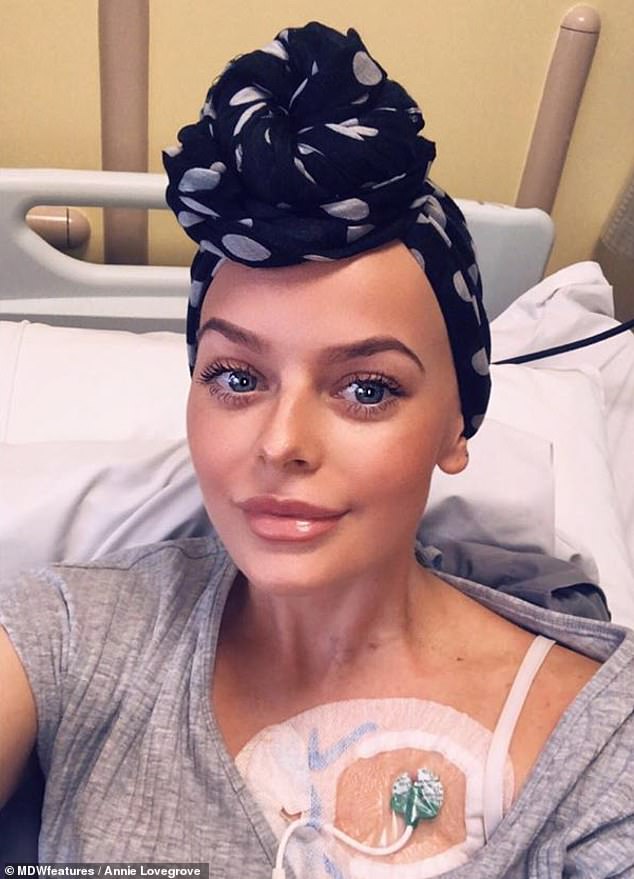 Miss Lovegrove needed a bone marrow transplant and had to have chemotherapy beforehand to prepare her body, which made her lose her hair 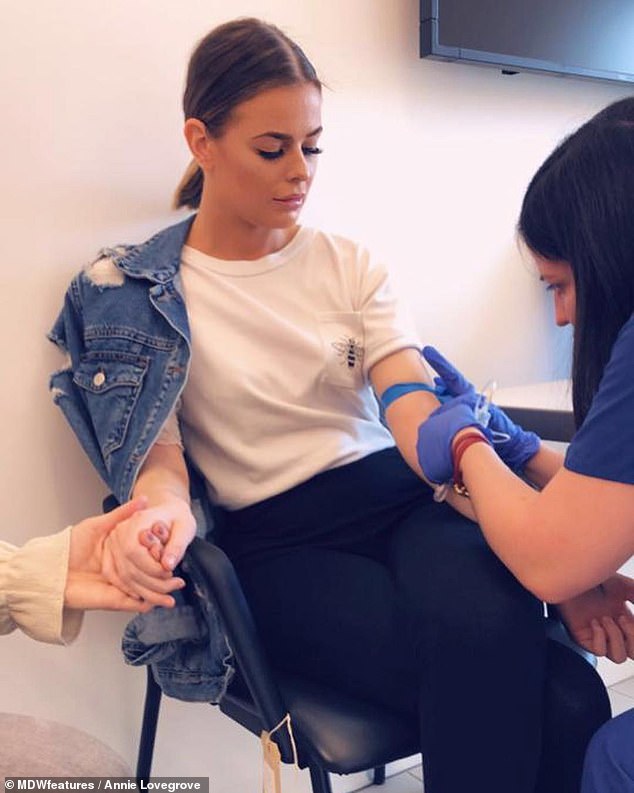 Blood tests revealed Miss Lovegrove had extremely low levels of red and white blood cells, leaving her at risk of simple infections. Pictured at a fertility clinic, she may have been left infertile by her chemotherapy

‘I had a mouth ulcer form in the middle of January, along with unexplained bruises on my body,’ Miss Lovegrove said.

‘After a week of using over-the-counter medication and saltwater, my mum told me to go to the doctor as there was no improvement. If anything, it was getting worse.’

Mouth sores are a symptom of aplastic anaemia. The immune system of patients is weak, so small wounds in the mouth can take longer to heal.

The doctor prescribed antibiotics but, when those didn’t work and Miss Lovegrove developed a fever, they thought it may be tonsillitis so gave her paracetamol.

But by this time Miss Lovegrove claims her body temperature had hit 41°C (105°F), she had a headache and her heartbeat was ‘sporadic’. 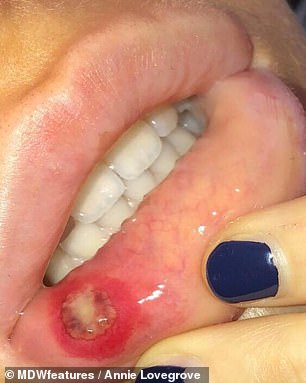 Miss Lovegrove then spent two weeks in hospital after blood tests revealed she had dangerously low counts of red and white blood cells.

This meant her immune system was extremely weak and even a simple infection such as a cold could devastate her health.

‘I had to have three pints of blood and platelets transfused within 24 hours of arriving,’ Miss Lovegrove said.

‘Then over the next two weeks in hospital, I received five more pints of blood and four pints of platelets. This basically kept me alive.

‘I was in isolation as I was neutropenic [low on white blood cells], and I couldn’t risk getting infections since everything was a risk to me. 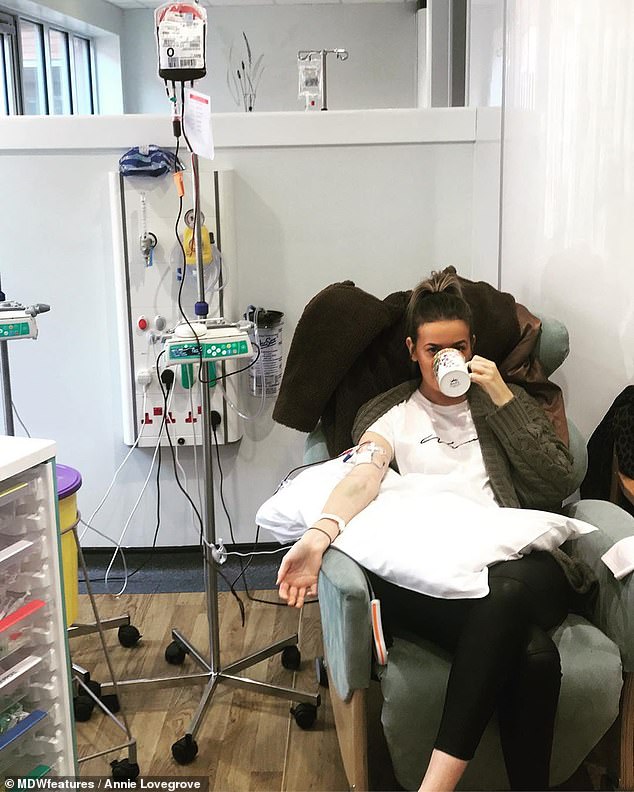 Miss Lovegrove has received more than 50 blood transfusions (pictured, having one early in her illness) since she became ill in January this year 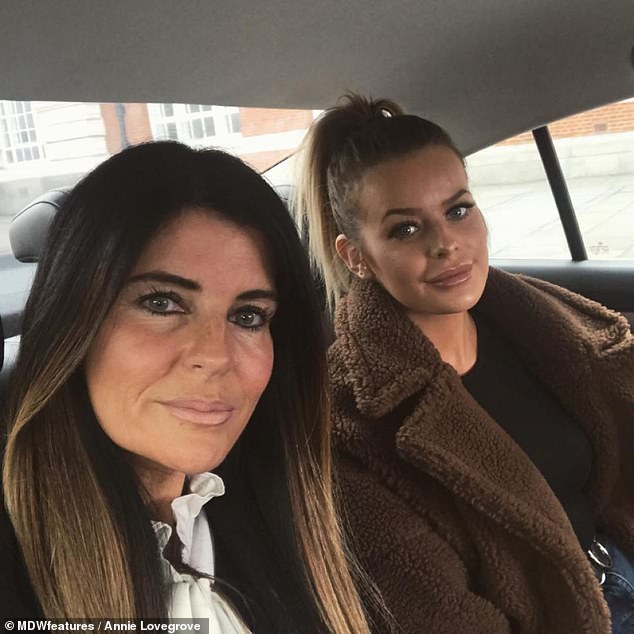 Miss Lovegrove’s mother, Hayley, 48, phoned an ambulance for her daughter the day after she had been sent home by a GP

‘Initially, my family were told that it could be leukaemia and they were devastated, but my first bone marrow biopsy in February confirmed that it was aplastic anaemia, which left us with a sense of relief at first.’

WHAT IS APLASTIC ANAEMIA?

Aplastic anaemia is a serious, potentially life-threatening condition  in which the bone marrow and stem cells do not produce enough blood cells.

The condition causes a drop in levels of red and white blood cells and platelets.

Red blood cells transport oxygen around the body, so a lack of them can starve muscles of oxygen, making people weaker and tired.

White blood cells are crucial for the immune system to function, and platelets are what helps the blood to clot when someone is injured.

Aplastic anaemia usually needs to be treated with a bone marrow transplant to kick-start the body into producing enough blood cells.

The condition can be inherited but can also develop on its own at any time.

In some cases, aplastic anaemia can develop into leukaemia, and it can lead to life-threatening heart failure.

It is a rare disease thought to affect around one in 500,000 people and is more common in children and older people.

Red blood cells are vital for carrying oxygen and nutrients around the body to the muscles and organs.

And white blood cells are the soldiers of the immune system, fighting off infections and potentially harmful bacteria and viruses.

People with aplastic anaemia may develop bruising or become exhausted and lethargic, and may bleed more than usual or become ill more often.

The disease is considered extremely rare and only around 100 to 150 people are diagnosed with it each year in England – about one in 500,000 people.

‘Once we read into it and learned more about the condition, we soon realised that leukaemia may have been less challenging to treat,’ Miss Lovegrove said.

‘There are different classifications of it, and… I was classed as very severe aplastic anaemia.’

Doctors decided a bone marrow transplant would be the best course of treatment and Miss Lovegrove’s 17-year-old sister, Millie, was chosen as a match.

Miss Lovegrove first had to have chemotherapy to shut down her immune system so the bone marrow wasn’t rejected, and she lost her hair in the process.

The transplant in May was a success but Miss Lovegrove is still weak and needs regular medical tests and follow-ups to make sure she doesn’t reject the transplant.

‘I lost my hair due to the aggressive chemotherapy I had to have to reset my body ready for the transplant,’ she said.

‘For a 21-year-old, that was quite devastating, but I’m learning to live with it. 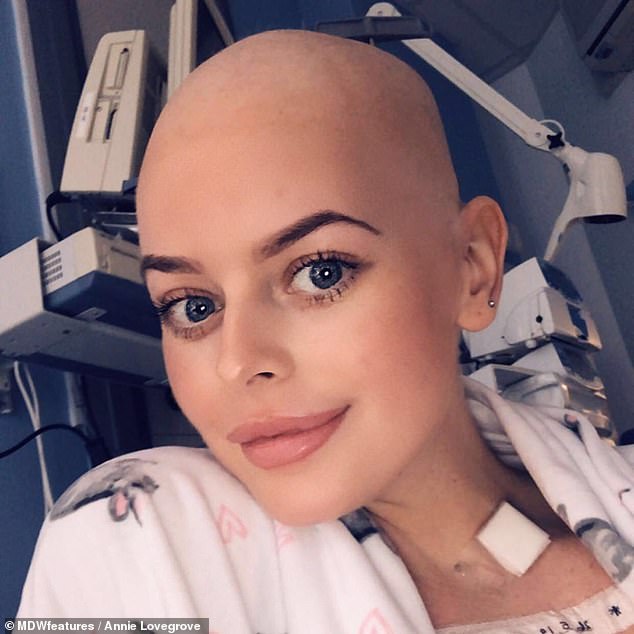 Miss Lovegrove lost her hair during chemotherapy before her bone marrow transfusion. She said being left bald was ‘quite devastating, but I’m learning to live with it’ 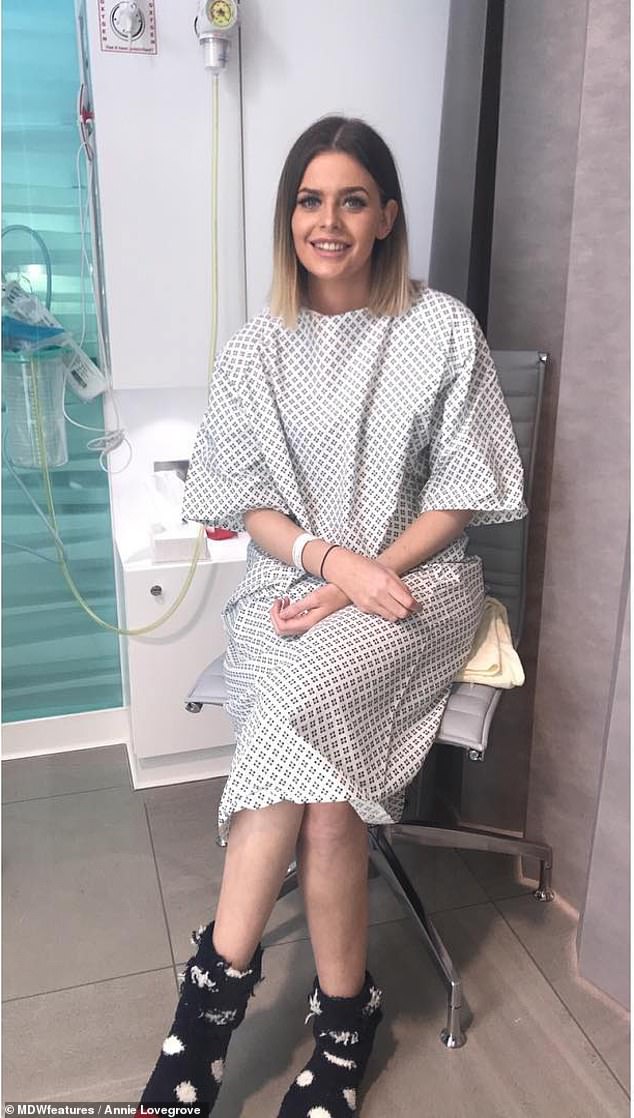 Miss Lovegrove had 15 eggs harvested from her ovaries at a fertility clinic before having chemotherapy, which may have wrecked her fertility 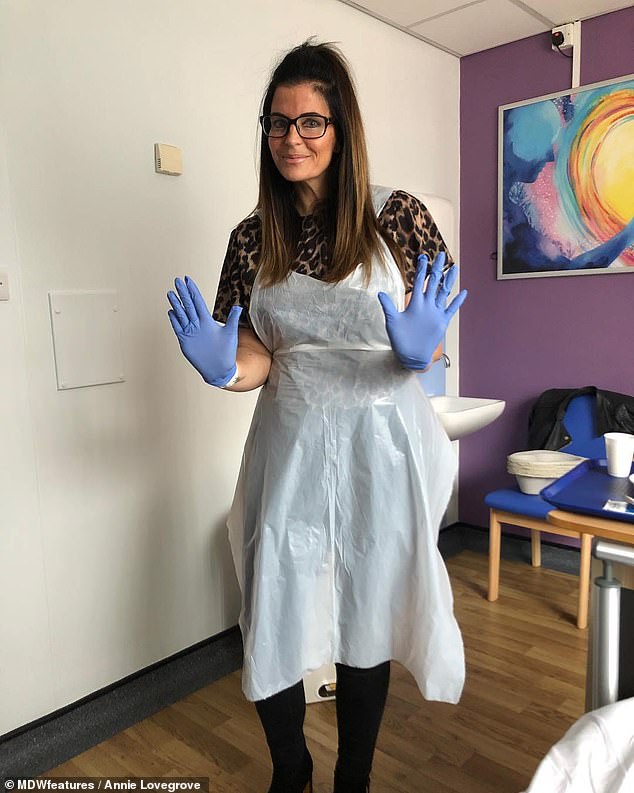 Miss Lovegrove’s family (pictured, her mother Hayley) at first thought she might have leukaemia when doctors realised there was a problem with her bone marrow 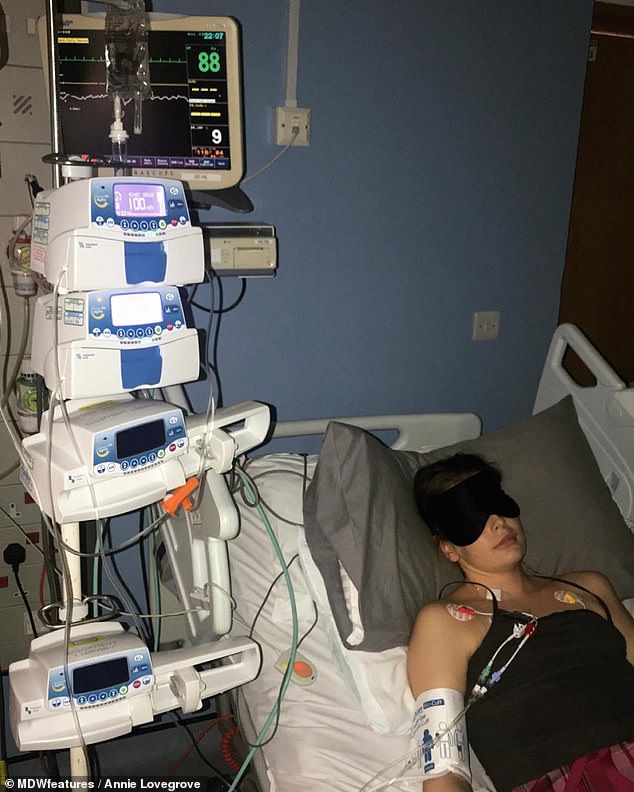 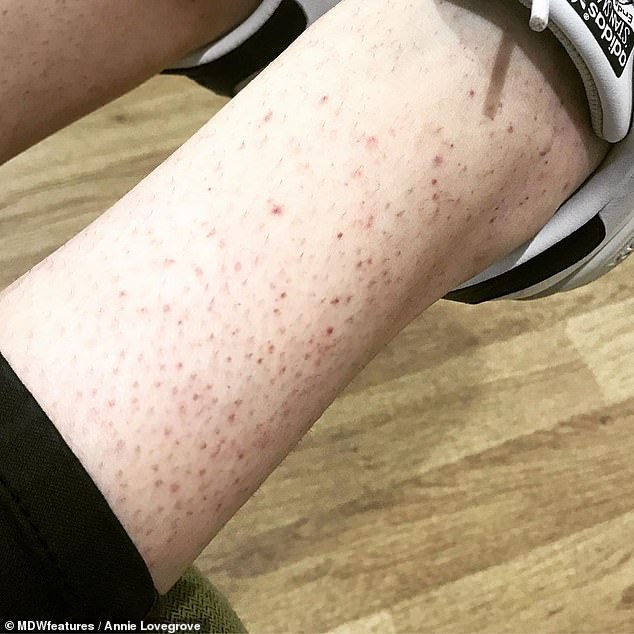 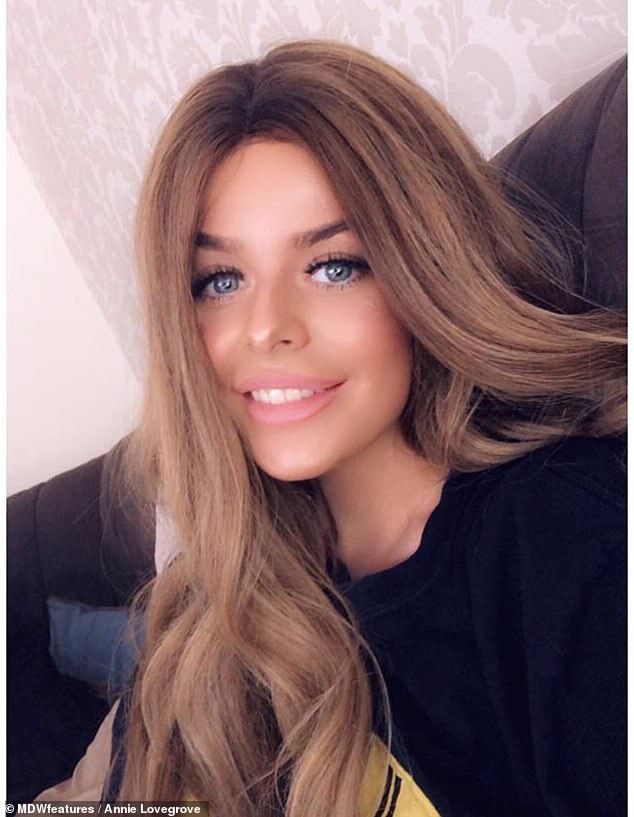 Miss Lovegrove, pictured recently, now wears wigs to cover up her bald head after losing her hair to chemotherapy

‘I also had to undergo egg preservation as the chemotherapy may have made me infertile. I harvested 15 eggs, which are frozen and ready for whenever I want to start a family.’

Miss Lovegrove said 2019 has been a ‘write-off’ for her because she has to spend so much time alone to avoid getting ill.

Even catching a cold could leave her seriously ill or kill her, so she stays home and mainly sees only her close family.

‘I’m hoping that once my blood levels improve I’ll be able to start leading a normal life again,’ she said.

‘I get very fatigued and need to rest a lot. Everyday routines take much longer and I require assistance from my mum.

‘It’s also made me paranoid about germs and the chance of catching an infection, so I’m constantly aware of what I eat, drink and touch.

‘It’s important that people don’t ignore the signs, like bruises and ulcers because that was my body’s way of telling me it was deteriorating.

‘If we didn’t go to A&E when we did, doctors said I wouldn’t have survived the next day.’