Woman showcases her incredible $15 cake present for her husband

‘Best cake of the year’: Woman showcases her incredible $15 present for her husband – and you’ll never believe what’s inside

A woman’s Christmas themed cake hack has gone viral online – and it only cost her $15 to make.

The mother-of-one from Australia was her husband’s Secret Santa and so purchased a $4.40 mudcake from Coles as well as a $12 cheesecake.

‘This took me about six hours to make and I was up at 3am doing it,’ the woman said in a Facebook post.

‘I was teary watching how it all unfolded. I made him a cake with all his favourite biscuits and I made it with a Coles mudcake and Coles New York cheesecake.’ 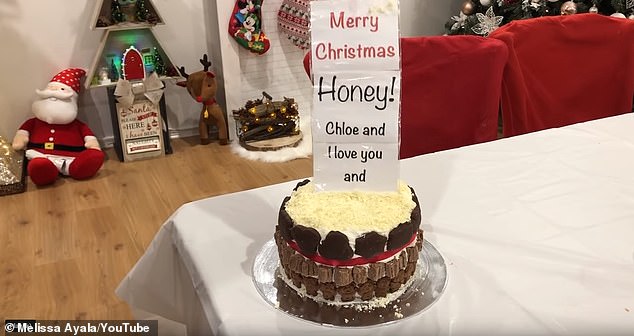 ‘It’s not the prettiest but my husband absolutely loved it and was sooooo shocked!,’ she added.

In the space of 11 hours her post received a thousand reacts and hundreds of comments from people who were impressed with her idea, with some saying it was the ‘best cake of the year’.

Many people said they thought the idea was ‘beautiful’ and ‘so sweet’.

‘I love this! Much better and more meaningful than the money thanks for sharing,’ one person commented. 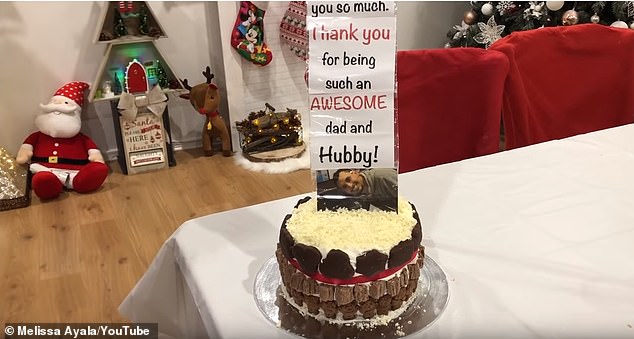 ‘This took me about 6 hours to make and I was up at 3am doing it,’ she said in a Facebook post

What is the money cake hack?

This involves hiding cash inside a cake that the recipient ends up pulling out.

People buy two mudcakes and cellophane lolly bags, which they put the money inside of and seal with tape.

Next they roll up the bags containing the money and put it inside the roll from a paper towel that has a slit cut in for the money to be fed through.

Then a rectangular hole in the middle of the cake is cut to fit it in.

Cake enthusiasts have put a birthday topper on top of the cake and taped it to the money so that when it is taken off the cake the money comes with it.

The busy mother also shared a video to YouTube of how she made the cake so other people can follow suit.

For the surprise inside she used cellophane bags and slid in pieces of paper that had text and photos printed onto them, which she sealed with sticky tape.

Next she rolled them up tightly so that the creation fit inside the cake properly.

She then took out the roll from a paper towel which she measured and cut to size so that it fit her rolled up cellophane bags.

So the paper could make its way out of the roll she calculated and made a cut big enough so that it could come out from the roll. 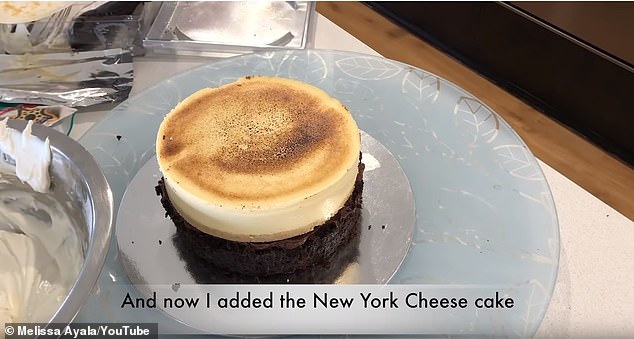 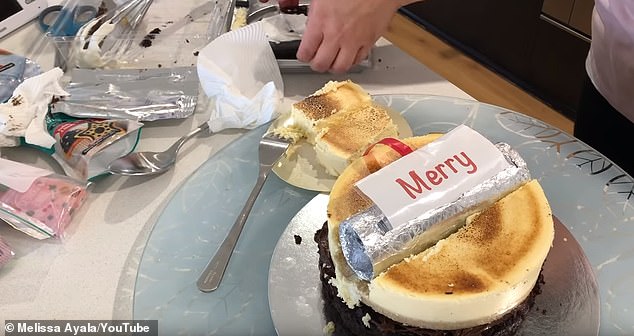 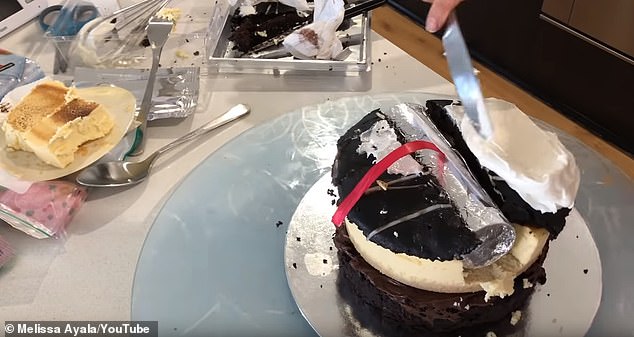 She then sealed it with foil for hygiene reasons and slipped the surprise inside.

So that her husband had something to use to pull it out of the cake the woman added a ribbon he could grab onto.

Finally it was all about the cake. She cut the mudcake in half before piling the cheesecake on top of half of the chocolate dessert.

She then cut a rectangle out of the top so that the role with the photos could fit inside and placed the other half of the mudcake on top so that the tube was nestled inside.

Once she covered the cake in buttercream she decorated it with her husband’s favourite treats, such as Tiny Teddies, Flakes and shaved white chocolate.