‘Are Superman and Batman your parents? No’: Woman sparks a rift on Twitter over PUNCTUATION when she uses superheroes to deliver a lesson on using the Oxford comma

A woman has sparked a heated punctuation debate online after using superheroes to deliver a lesson about the Oxford comma.

The clip, which has been viewed nearly 3million times, was originally posted to TikTok by user Kelsie Satterfield, who argues in favour of the controversial punctuation mark.

In the video Ms Satterfield holds a whiteboard with the sentence ‘I thanked my parents, Batman, and Superman’ written on it.

The clip, which has been viewed nearly 3million times, was originally posted to TikTok by user Kelsie Satterfield

‘However, if I decided that I want to go and erase that Oxford, then do you know what you’d be saying? You would be saying that Superman and Batman are your parents.

‘Are Superman and Batman your parents? No? Then your job as the author is to help your readers know that by using the Oxford comma. 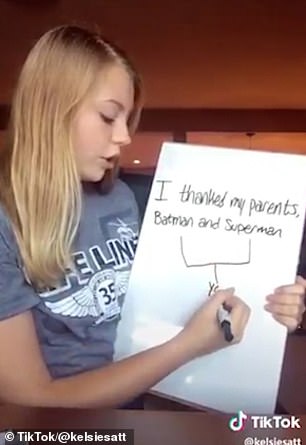 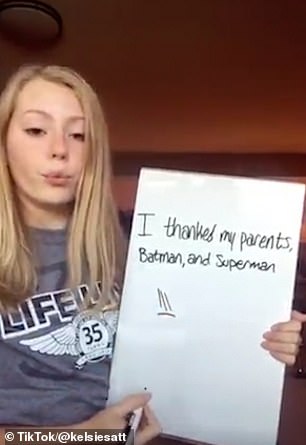 In the video Ms Satterfield holds a whiteboard with the sentence ‘I thanked my parents, Batman, and Superman’ written on it, and argues that removing the final comma would make the sentence imply that Batman and Superman are the writer’s parents

The video was shared to Twitter by Dave Jorgenson of The Washington Post, who said: ‘This is actually my favorite TikTok.’

One Twitter user said: ‘She’s wrong. I don’t care if you use the Oxford comma or not, but if you want to imply parentage you have to use a colon. ”I want to thank my parents: Batman and Superman.” I appreciate her passion but her rationale is bunk.’

Another said: ‘I’m opposed to the Oxford comma because you can rewrite that sentence, not confuse your readers and save yourself a comma. ”I thanked Batman, Superman and my parents.” ‘

A third said: ‘Using social media to make an intelligent point – what a concept!’ 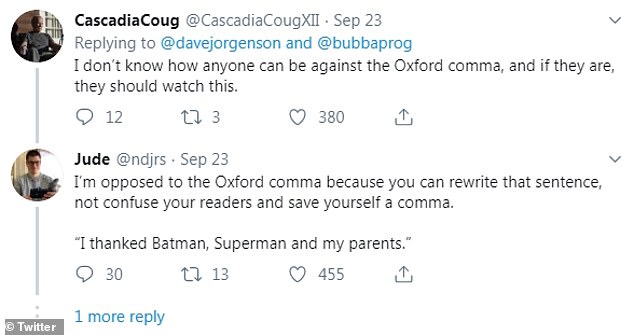 One social media user retweeted an older post which read: ‘The Devil’s greatest trick was making sub-par writers think their lazily constructed sentences wouldn’t suck if only for an extra MF’ing comma.’

Another profile using the name ‘WIlson’ said: ‘Five minutes ago I was fed up with being lectured to by 16 year-olds. Now, not so much. But I am glad she didn’t say ”how dare you”!’

One user said: ‘Joke’s on her, Batman and Superman are my parents.’