A woman who admits to talking about her future wedding ‘non stop’ despite not being engaged has gone viral with her list of the stringent rules she will impose when the big day eventually comes around.

Kennedy Marks, 22, from Devon, took to TikTok to reveal the 13 things she wouldn’t let slide at her wedding and was hit with a mixed response.

In the clip, that gained over 690,000 views, she revealed that rules such as ‘no phones’ and ‘don’t stress me out, ask my mum’ were her absolute musts, and said that parents must keep hold of their children at all times and stop them from ‘screaming’.

Even then, she’s reluctant to invite children in the first place, and added that she doesn’t want ‘boring’ people there either.

She warned that nobody is allowed to have photos taken by the professional photographer until all hers have been done, and anyone daring to step on to the dancefloor during the first dance will be ‘dragged off and never seen again’.

Some commenters thought the list was an essential for any guests who might step out of line, while others thought she was being too harsh.

Kennedy Marks, 22, from Devon, made a list of 13 essential rules for her wedding day and shared them to TikTok, gaining over 690k views and sparking a debate 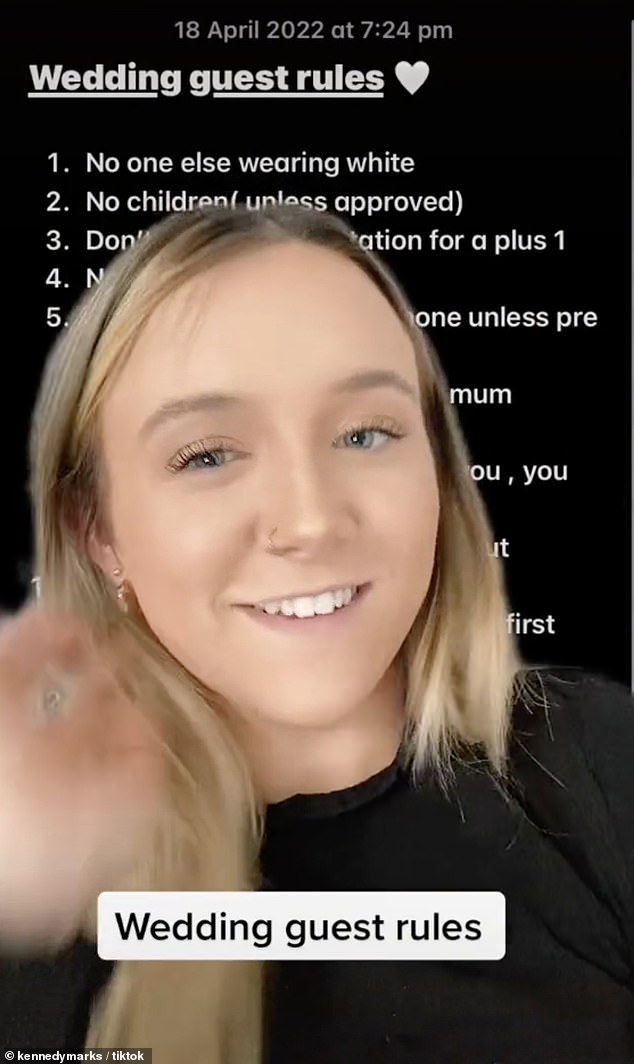 Kennedy explained: ‘My boyfriend is not proposing to me any time soon and also doesn’t know any of these rules but I thought I’d give it a go.’

‘My bridesmaids are under very strict instructions that if someone comes in wearing white, a bottle of red wine will be poured on you and you will be getting out before I see you.’

She also revealed: ‘I don’t want screaming in my ceremony, I don’t want your children running onto the dance floor whilst I’m trying to do my first dance because you’re at the bar. Just, no.

2. No children (unless approved).

3. Don’t assume an invitation for a plus one.

5. No-one to use the microphone unless approved.

8. If me or Rhys have never met you, you aren’t coming.

9. No rudeness to staff or you’re out.

10. No phones in the ceremony.

11. Anyone on the dancefloor on my first dance will be dragged off.

12. Guests wear whatever you’re comfortable in.

13. Full use of my photographer after my photos.

‘Don’t assume an invitation for a plus one, unless you’re invited, don’t ask to go. If I haven’t met them I don’t want to spend £100 on them.

‘Do not make an announcement at my wedding like a pregnancy, like a pregnancy and engagement, anything like that. Please don’t take the attention away from me, I’m an attention seeker through and through. I will get you out and we will never be friends again.

‘No one is to use the microphone unless pre-approved. I want live musicians, it’s not a karaoke.

In a second video, Kennedy continued her list and started with: ‘Do not stress me out, ask my mum. That woman is a perfectionist and knows me through and through, and if anything goes wrong there will be backup plans in place. That woman is a genius.

‘No phones at the ceremony, I don’t want all of my photos to be on phones, I want to enjoy the moment, let’s all embrace it.

‘Anyone on the dancefloor during my first dance will be dragged off, you will never be seen again, you will disappear after that.

‘Full use of my photographer, but after my requested photos, I want you to have the really cute photos of your and your boyfriend for Instagram but after my photos.’

Responding to a comment asking how she planned to enforce the rules, Kennedy said: ‘Sadly for my friends and family I talk about my future wedding non stop, maybe I should create a PowerPoint and send it to everyone’.

Some commenters were outraged at Kennedy’s list and insinuated it was an unnecessary bank of demands.

One person fumed: ‘Bridezilla you’re not even getting married. red flag to your boyfriend run when you can. he has no say it’s his day too.’

While anothe said: ‘No plus ones? if couldn’t bring someone with me I wouldn’t go’.

A third complained: ‘So if I’m not someone who likes to dance, I’m not welcome at your wedding? very strange.

Others, however though the list should be commonplace at any wedding and commended Kennedy for setting boundaries with those who might be disrespectful.

One person said: ‘We’re going to a few no children weddings and I’m so looking forward to them haha! There’s absolutely nothing wrong with setting boundaries’.

Another wrote: ‘I thought this was just common sense. If people don’t respect this, they clearly don’t care or respect you’

While a third agreed, saying: ‘Love all of these!!! I get married in 6 weeks and also have all these rules.’