This is the moment a woman cracked her head on a low bridge as she rode on a party boat with friends.

Footage shows her standing up just as they approach the bridge before being flung onto the deck when she hits its hard decking.

She survived the blow sustained in St Petersburg, Russia, reportedly escaping with just a few cuts to her skin. 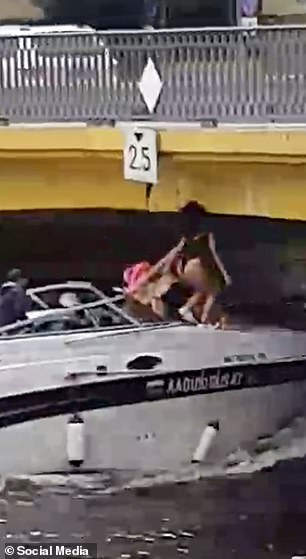 This is the moment a woman cracks her head on a bridge in St Petersburg, Russia, while enjoying a party boat trip with her scantily-clad friends

A photographer on the boat later posted on social media to say the woman was ‘alive’ after the accident, near the city’s affluent New Holland Island.

‘I was there taking pictures,’ said Ilya Zhukov. ‘She is all right, it was just her skin that was cut. She is alive.’

He had responded after posts questioning whether the woman had survived.

‘The music had been very loud, plus the engine was roaring, and I think she just didn’t understand the distance and the height of the bridge when she stood up,’ he said.

‘We stopped immediately and took her to the nearest accident and emergency hospital.’

One report said she had required nine stitches. She underwent an MRS scan which showed she had not suffered any serious damage. 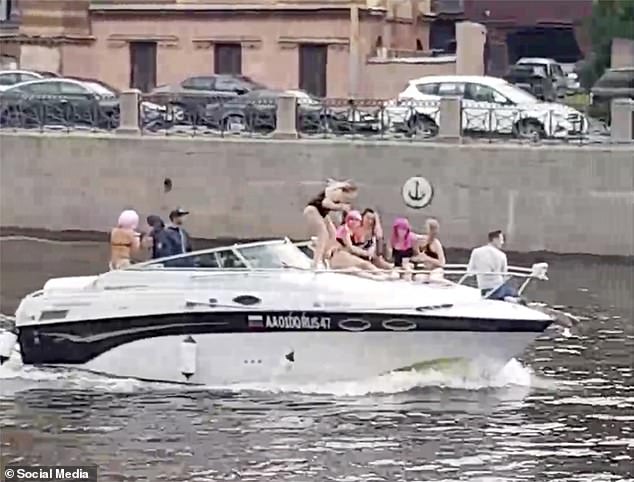 The woman survived the impact, according to a photographer, and escaped with just a few cuts to her skin

Witnesses said the boat was moving fast and loud music was playing, even though a warning horn was sounded to alert about the low bridge.

Those on board – most in swimwear and some in pink wigs – danced with drinks in their hands as the boat approached Khrapovitskiy bridge.