Christine Beeston, 49, has been jailed for two-and-a-half years after admitting to stealing £47,308.91 from her parents – leaving them with just £560 from their life savings

A ‘greedy and devious’ woman has been jailed for two-and-a-half years for stealing nearly £50,000 from her dementia-suffering parents.

Her father, who was in his 80s, has since died, and her 82-year-old mother is so ill she does not know she has been ‘fleeced’ by her daughter.

She was only able to continue living in her Hull care home because social services stepped in when £24,000 of her bills went unpaid.

Ms Beeston’s crimes came to light when her brother, Colin Dobson, turned detective and exposed what she had been doing after becoming suspicious, Hull Crown Court heard.

When she was arrested, Beeston, 49, said she believed she had ‘only taken what was going to come to her in due course’, according to prosecutor Matthew Bean.

Beeston, who admitted to two counts of fraud, began caring for her parents when they were still at home and took control of their bank cards, pass books, and five bank accounts.

Mr Bean said her crimes started in early 2012, when Beeston began using the accounts to buy items from the online catalogue Studio Cards.

She spent an initial £7,500 this way, while having ‘increasing control of her parents’ affairs’ – also making cash withdrawals while still spending online.

The disgraced daughter got power of attorney in August 2013, and in February 2014, both parents moved into the same care home.

Mr Bean said: ‘From this time the defendant had complete control over their affairs.’

Mr Dobson reported his sister to police after he obtained joint power of attorney in 2015 and ‘began making inquiries’.

When Beeston was arrested in June 2015 and interviewed, she said she had taken the money so that her brother, who she had fallen out with, would not get any of it in inheritance.

Mr Bean said: ‘In her view she had only taken what was going to come to her in due course, but she had taken the money before she should have, and by that accepted she had acted against the best interests of her parents.’ 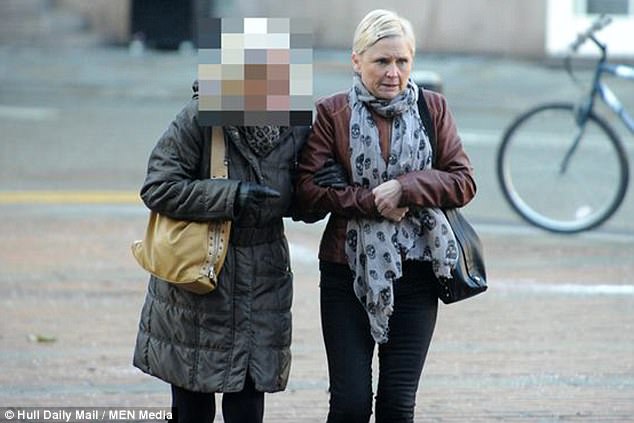 Mr Dobson, 52, read his victim statement to the court, and called his sister ‘greedy and devious’, while she sat in the dock sniffling and holding her hand to her chest.

‘It is very difficult to put into words how this has left me feeling,’ he said.

Charlotte Baines, mitigating, said: ‘She bitterly regrets her actions. She is clearly genuinely remorseful in my submission.’

Beeston had not been allowed to contact her parents as a result of her bail conditions, and had only learned of her father’s death when she was sent a message of condolence on Facebook, Miss Baines said.

‘She hasn’t really even started the grieving process,’ she said. ‘She didn’t attend her father’s funeral because she didn’t think she would be allowed to because of the proceedings here and her bail conditions.’

Jailing Beeston, a grandmother, for two-and-a-half years, Judge Mark Bury said she had behaved ‘quite appallingly’ to her parents when she was supposed to be responsible for their safety and security.

Speaking after the hearing, Mr Dobson said: ‘I would like to say there’s no winners in this. She’s brought it all on herself.’