This is the bizarre moment a naked woman jumps on top of a police car after being released following a court appearance for flouting Spain’s coronavirus lockdown.

The unnamed blonde stripped off and made her colourful protest after appearing before a judge in the Costa del Sol resort of Torremolinos.

She was held at around 8pm on Saturday after annoying neighbours who had applauded emergency services for their work in the fight against coronavirus – as happens on a daily basis in Spain.

She was filmed resisting arrest with her clothes on at first, but stripped off as she got to court. 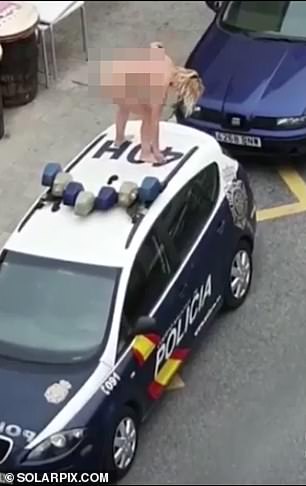 She also took her clothes off after being released on bail by a judge and getting on top of the police vehicle.

After being hit with a truncheon and pinned to the ground, she was taken to a waiting ambulance.

She has been described as a 41-year-old Spanish national. 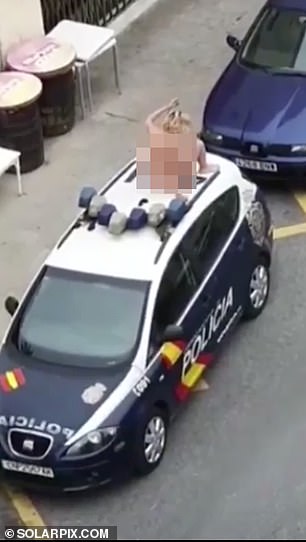 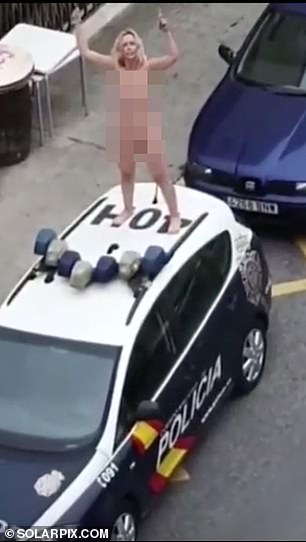 She has been described as a 41-year-old Spanish national. Left: the woman also appears to sit down on the police car at one point

Her whereabouts this yesterday evening were not known.

On Thursday a man was filmed dressed only in black pants climbing onto an underground track as a tube approached.

Transport bosses had to suspend underground services in the area after the unnamed man sat on the edge of a platform and ignored the desperate attempts of a security guard to get him on his feet. 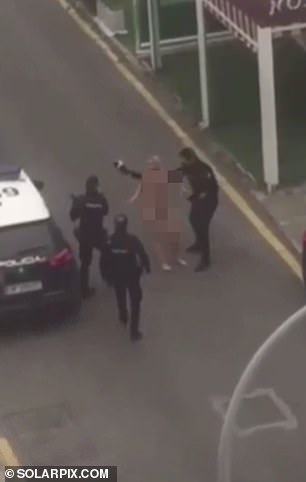 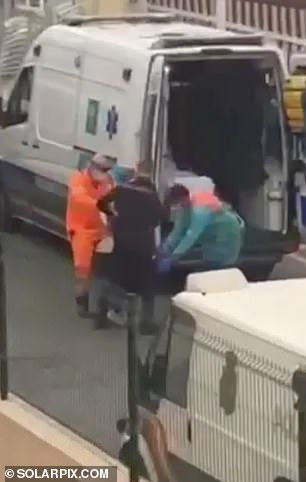 After being hit with a truncheon and pinned to the ground, she was taken to a waiting ambulance

Local reports said he was eventually persuaded to desist by the same security guard before being taken away by police and paramedics.

It was not immediately clear why the man had stripped off to his underwear and got on the platform. He had left his clothes beside him.

A woman could be overheard saying in Spanish: ‘He wants to throw himself over the edge’ before adding, ‘No, no, no, no’ as he clambered onto the tracks and stood with his arms folded in front of him as a tube train edged closer to him.

The same woman then said with an obvious sense of relief in her voice, ‘The train has stopped.’

He was taken to a private hospital named as the Fundacion Jimenez Diaz after the emergency services were alerted.

Spain is starting to return to work today as non-essential workers such as factory and construction personnel were allowed to resume their jobs after a two-week ban.

Police were handing out millions of masks at Spanish metro stations today as some people returned to work, although the wider coronavirus lockdown remains in force.

The two-week ‘hibernation’ of non-essential business was imposed on March 30, making the lockdown even tougher than in Britain where people have always been able to travel if they cannot work from home.

There was further encouragement for Spain today as the number of new cases fell to 3,477, the fewest since March 20. The daily death toll also dropped back to 517 after jumping sharply to 619 yesterday.