Delany Luh, 23, has filed a lawsuit against Delta after she claims a fellow passenger put his hands down her leggings and digitally penetrated her vagina on a flight from Chicago to Los Angeles in June. The suit accuses airline employees of continuing to serve alcohol to the alleged assailant despite his ‘obviously inebriated state’

A 23-year-old fashion designer who says she was sexually assaulted by her seatmate on a Delta flight in July is suing the airline for continuing to serve the passenger alcohol despite the fact that he was visibly intoxicated.

Delany Luh claims she was sleeping on a Delta flight from Chicago to Los Angeles on June 16 when she when she woke up to find the male passenger next to her shoving his hands down her leggings and digitally penetrating her vagina.

The young designer, who founded street-wear and fitness fashion label I Am Plenty Apparel, detailed the disturbing incident in a Twitter thread days later, saying she had to beg flight attendants to move her to a different seat and ultimately offered her a meager $200 voucher while her alleged assailant walked away unpunished.

A lawsuit filed this week on Luh’s behalf accuses Delta employees of continuing to pour drinks for the passenger – identified only as ‘Will’ – despite his ‘obviously inebriated state’.

The suit is seeking $1million in compensatory damages and $5million in punitive damages. 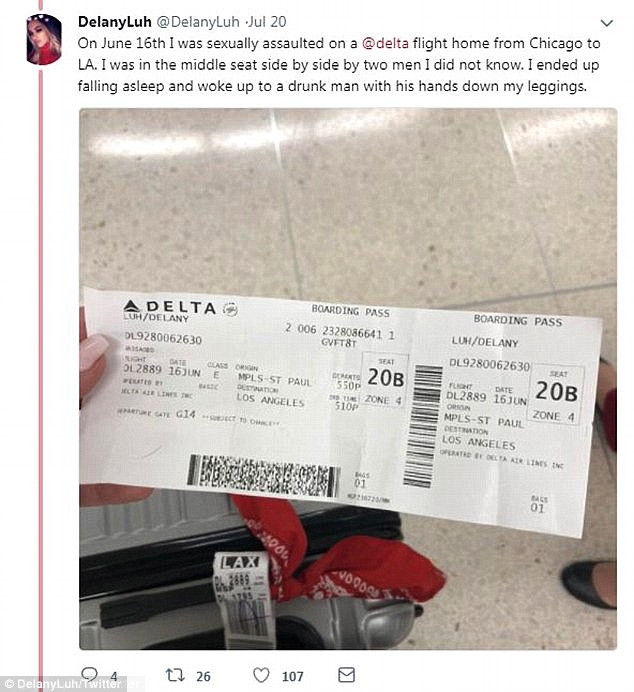 The Los Angeles-based fashion designer tweeted about the alleged assault about a month later when she had still not been able to get an adequate response from the company. Luh claims that the airline allowed the alleged perpetrator to walk off the flight without consequences and handed her a meager $200 travel voucher as compensation

Knoxville attorney James Friauf described in court documents that Luh was seated between two male passengers on the June flight, one of whom ‘attempted to engage her in small talk’ about his work and ‘marital problems’ while the other fell asleep.

‘During the conversation, [Luh] observed [the man’s] eyes were watery and bloodshot,’ the suit says.

‘The smell of alcohol was noticeably strong on his breath. As assailant spoke, he leaned in close to [Luh], making her feel uncomfortable.

The smell of alcohol was noticeably strong on his breath.

‘Upon information and belief, Delta served Assailant as many as six to eight alcoholic beverages in the course of less than two hours.’

The suit states that Luh at one point ‘attracted the flight attendant’s attention and gave her a concerned look’ while the employee served the man another drink.

‘[Luh] did so in an attempt to make the flight attendant aware of her discomfort without making obvious to Assailant that [Luh] was raising concern about his intoxication level,” Friauf writes.

‘[Luh] worried Assailant would become agitated with her if he realized she had complained about him. The flight attendant ignored [Luh].’ 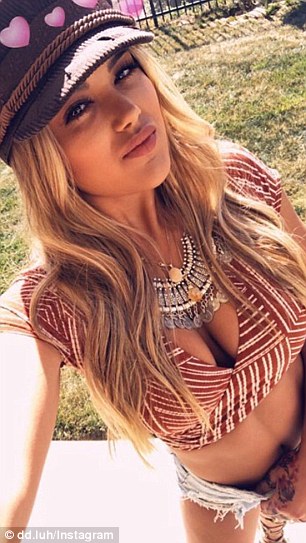 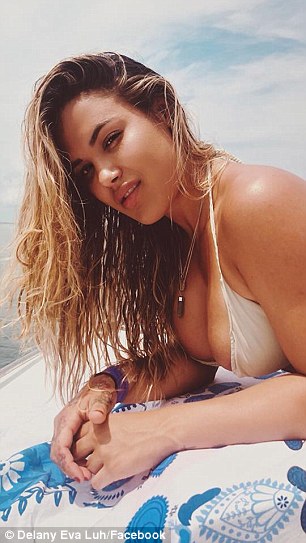 According to the suit, the alcohol caused the man to become increasingly ‘bizzare and harassing’ throughout the flight.

‘At one point, Assailant pretended to make a telephone call during which he told the phantom participant named “Molly” that he was going to California and was hoping to meet some “cool girls who were unlike this one next to [me], who [was] not being nice to [me]”,’ the suit claims.

‘Assailant continued to talk to “Molly” about Plaintiff, including referring to Plaintiff as a [expletive] and a “California [expletive]” and postulating that Plaintiff was “in a gang” because of a tattoo on her hand.’ 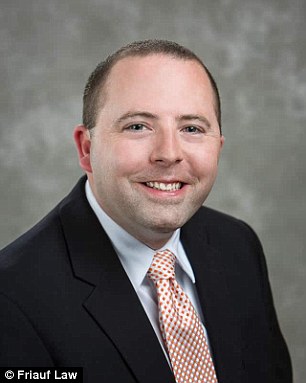 The alleged assault is detailed in a lawsuit filed by Knoxville attorney James Friauf (pictured) this week. The suit is seeking $1million in compensatory damages and $5million in punitive damages

Luh told the man to leave her alone before leaning ‘as far as possible to the left and onto the window-seat passenger who was asleep and wearing headphones’ and eventually falling asleep, the suit says.

‘After having slept for a few minutes, Plaintiff was startled awake by an abrupt discomfort in her vaginal area,’ Friauf writes.

‘[Luh] quickly realized the origin of the discomfort was from Assailant manipulating his hand inside her pants and underwear and digitally penetrating her vagina.’

The designer immediately grabbed the man’s arm and ordered him to move so she could get out of her seat, but he refused, according to the suit.

‘Because Assailant refused to budge, [Luh] was forced to climb over him to reach the aisle,’ it says.

‘As she did so, Assailant pointed to his genital area, where (Luh) observed Assailant’s erect penis bulging from his pants.’

Luh’s abrupt exit knocked a vodka cranberry cocktail off the man’s tray table and onto the floor, drawing the attention of other passengers.

After she managed to get out of her seat, Luh says she ‘ran down the aisle of the aircraft to a Delta employee and tearfully recounted what had occurred’.

Luh was allowed to relocate to a different seat for the remainder of the flight, and when it landed she realized the crew had not informed law enforcement of the incident, as she presumed they would.

‘[Luh] was forced to notify appropriate law enforcement and airport authorities on her own after [Delta’s] employees allowed Assailant to exit the aircraft without incident or consequence for his abhorrent actions,’ the lawsuit states.

It is unclear whether law enforcement was able to identify the man.

When Luh complained to the airline about its handling of the situation, Delta gave her a $200 voucher for future travel.

Delta issued a statement about the incident, saying Luh hadn’t made a complaint until she left the aircraft and that she told a Delta agent she ‘had been improperly touched on the leg by another passenger during her flight’.

The statement said: ‘Immediately upon learning this information, Delta reported the incident to local and federal law enforcement for their handling.’

The airline asserted that the ‘safety and security of our customers is our top priority and we do not tolerate harassment or assault of any kind’.