Woman teaches husband what it’s like to be female online

A man whose wife concocted an online experiment to teach him how it feels to be female said it had ‘opened his eyes’.

Jessica Eaton, a feminist speaker from Burton Upon Trent in Staffordshire, was determined her husband Alex should understand what it can be like using the internet as a woman.

She had him log into an internet chat room under fake profiles – one male, and one female, to demonstrate the vast differences in the ways that men and women experience social media.

Her point was proven when Alex’s male profile received no messages, while the profile under which he posed as an 18-year-old girl was bombarded with sexual messages within seconds.  Her husband said of the flood of pornographic images: ‘This is horrible’.

Jessica Eaton, a feminist speaker from Burton Upon Trent, Staffordshire, was determined for her husband Alex to understand what it’s like to use the internet as a woman

Describing her experiment on Twitter, Jessica said Alex was shocked by the ‘hundreds’ of dirty messages, and other users said they were tempted to test it out for themselves.

Alex and Jessica created two profiles on non-sexual forums to conduct the experiment research, one for a man and one for a woman, both of whom were listed as 18 and given ‘boring’ usernames.

Jessica tweeted: ‘Just did a social experiment with my husband to teach him what being a female online is like.

‘I got him to enter a generic non sexual forum as a 18 year old male with boring chat name and guess what? Nothing happened.’ 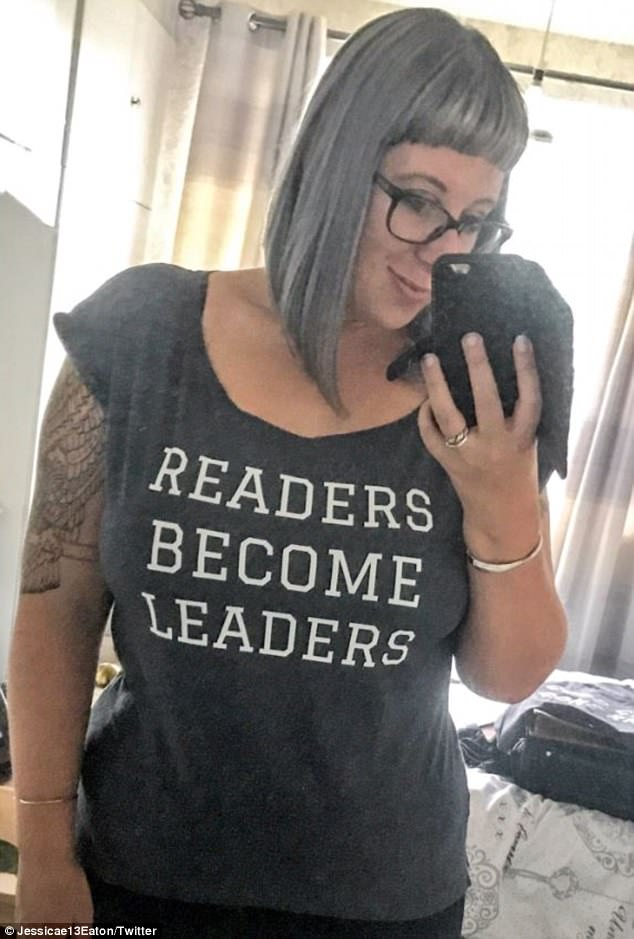 The Twitter user said Alex’s fake profile was flooded with explicit messages, which he found shocking and uncomfortable

‘Within seconds he had eight inbox messages from men and the first one he opened was a full picture of a guy’s d***,’ Jessica said.

The account was flooded with hundreds of messages within minutes, including from one user who sent pornographic pictures.

She said: ‘He got hundreds of messages in a few minutes and couldn’t keep up.’

Alex was shocked by the volume and content of the messages, telling his wife that he couldn’t keep up with them.

Jessica posted: ‘He then turned to me and said “This is shocking – this has opened my eyes Jess, this is horrible.”

Jessica posted a Twitter thread about the experiment, which was re-tweeted and liked more than 1,000 times

‘I said to him “That’s what you get for being female online” and he just stared as hundreds more messages poured in.’

The fake profile was contacted by 40 accounts in just half an hour, with the messages being so constant they crashed Alex’s phone.

Alex was most shocked about the amount of explicit images the profile received and was scared to look as more and more messages came pouring in.

Twitter users were shocked by the experiment, with over 1,000 people liking and retweeting the thread.

Many men responded to the tweet saying they would like to do the experiment, with one posting: ‘Is it possible I could know what forum it was on so I can try this for myself? Sounds like an eye-opening experiment.’

Many of the men on the forum sent explicit messages, including one who sent a picture of his privates

‘Thank you for this info. That is a great lesson for us guys,’ another tweeted.

A third said: ‘I am not surprised by the result of your experiment and any idea how to fix this? Is revolting . I think I am a pretty normal straight guy.’

Jessica later updated her followers saying that Alex performed the experiment on his friends and they were also shocked by the results.

She said: ‘As an update, my husband has now repeated this experiment to show his friends and co-workers just how real this s*** is and it worked every time.’

Alex also did the experiment on some of his male friends, and many Twitter users vowed to do the same