Opening up: Yvette Corporon, 48, told Femail how her grandmother helped hide and save a Jewish family during World War II

A woman whose grandmother helped save a Jewish family during World War II, years before her own teenage relative died at the hands of a neo-Nazis, is urging people ttumpo fight against hate.

Yvette Corporon, 48, told Femail how her grandmother Avgerini helped hide and save five people in 1944 on the tiny Greek island of Erikousa, located eight nautical miles northwest of Corfu.

Avgerini, a native of Erikousa, along with other villagers, rescued a man named Savvas Israel, as well as his three daughters Spera, Nina and Julia and a girl named Rosa, whose entire family had been murdered by Hitler’s regime.

The rescue, which Yvette chronicles in a newly-released book, came while the Nazis as they were rounding up the entire Jewish community in Corfu to send them to the Auschwitz concentration camp.

Savvas, his daughters and Rosa managed to escape and found their way to Erikousa and Avgerini’s house, Yvette, who works as a television producer in New York, said.

Avgerini had befriended Savvas, a tailor, as well as his daughters, by visiting every time she needed an item of clothing made.

Yvette’s grandmother, along with other villagers, enlisted the help of a priest, who gave up his own home behind the church so that the family could move in.

At night, Yvette recounted, Savvas, his daughters and Rosa would sneak out and go to Avgerini’s house, where Yvette’s father, who was nine years old at the time, lived with his seven-year-old sister. 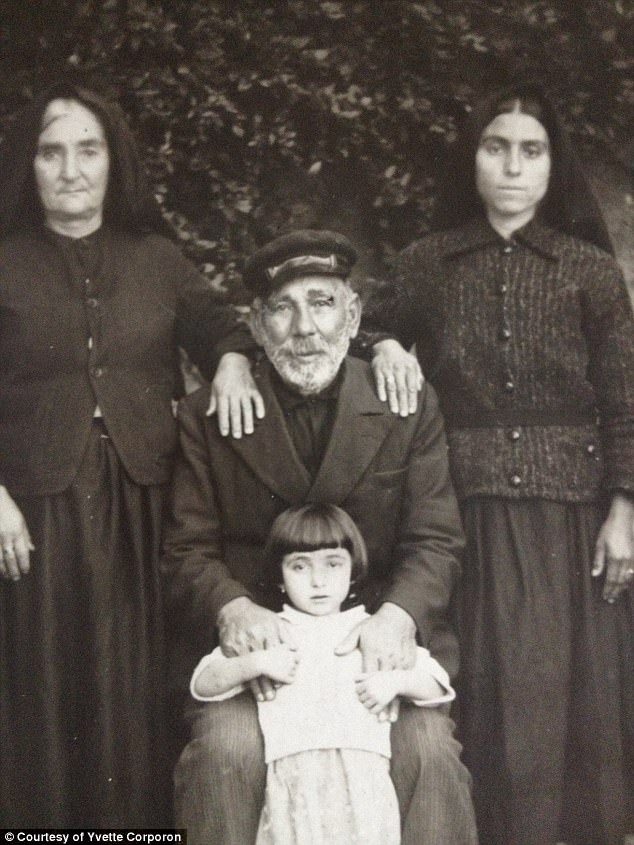 Hero: Avgerini (top right), a native of the tiny island of Erikousa, Greece, helped hide a father, his three daughters and another girl, along with other villagers who also stepped in 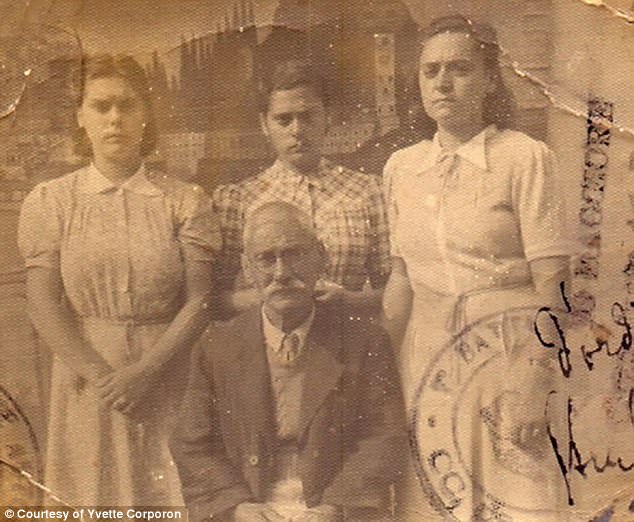 History: Savvas Israel (front row) and his three daughters Spera, Nina and Julia (back, from left to right) escaped while the Nazis were rounding up the entire Jewish community in Corfu 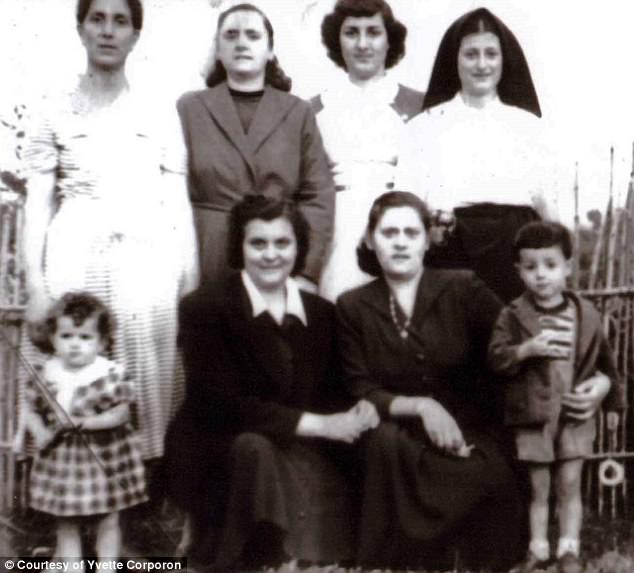 Praise: Yvette pointed out how the villagers (pictured with Julia, top, second from left and Nina, bottom, second from right) took extreme risks to save the family

Savvas’ daughters taught Avgerini how to sew while Rosa, who was also nine, sometimes climbed into bed next to Yvette’s aunt and fell asleep next to her.

‘People were starving all throughout Greece at the time,’ Yvette said. ‘And my father remembers my grandmother taking food and rationing, portioning the food, and taking food from her own children so she could feed the girls when they came to visit her.’

Yvette’s grandfather had left Greece to emigrate to the United States, meaning Avgerini was left to care for two small children during the war while her husband was away—and yet risked everything to save Savvas and his family.

‘These were very provincial, illiterate women,’ Yvette stressed. ‘They were not worldly. They were very very simple people, but they all stood up together and did something extraordinary.’

Avgerini and the villagers knew that what they were doing was dangerous.

‘The Nazis told them, “If you guys are found hiding or helping Jews, we will not only kill you, but we will kill your entire family”, but they did it anyway,’ she added.

Her father remembers hearing the Nazis searching and ransacking the house, asking ‘Where are the Jews?’—but they never found Savvas and his relatives.

After the war ended, Yvette said, Avgerini and the rest of the villagers didn’t discuss the family, nor did they flaunt their act of extreme bravery.

‘They were poor, they were uneducated, but they were such kind, goodhearted people that it was never possible to not help your friend. They did what they knew was the right thing to do,’ Yvette said. 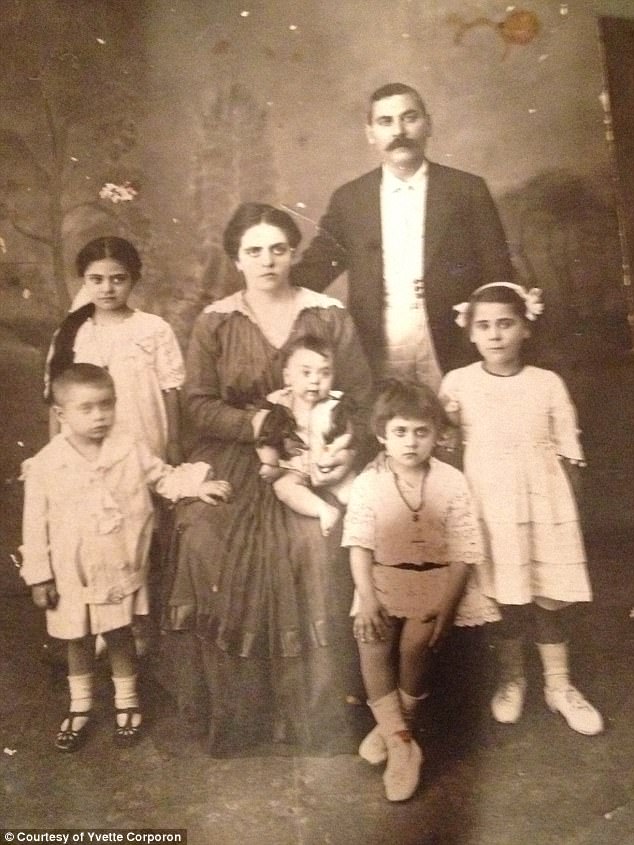 Friends: Savvas (pictured with his family before the war) was a tailor, and as such had become close to Avgerini, who often retained his services 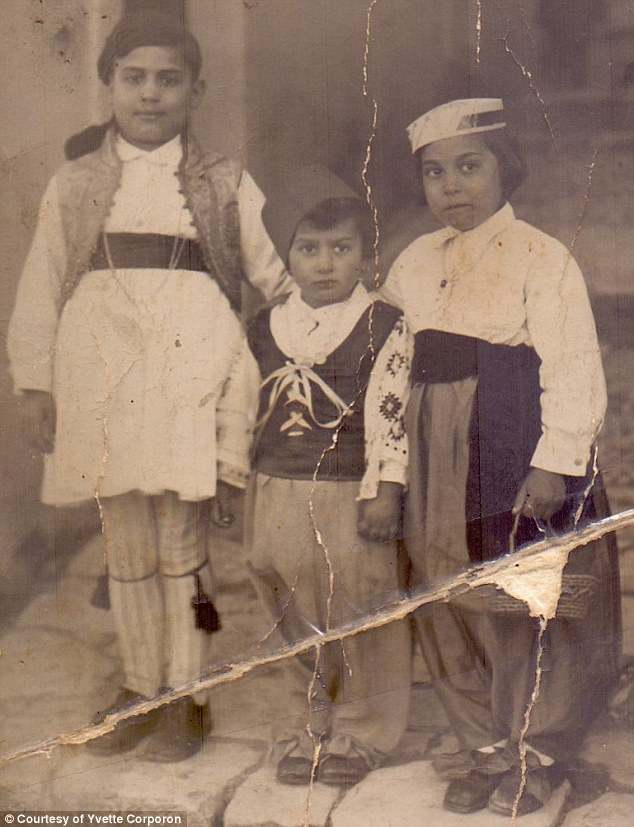 Tragic: Rosa (pictured center with her brothers before the war, dressed in Purim costumes) was rescued by the villagers after her entire family was murdered by Hitler’s regime

Years later, the journalist decided to write a book about her grandmother’s story, and at first was inspired to write a novel, When The Cypress Whispers, published in 2014.

But she later resolved to use her investigative skills to try to track down Savvas’ relatives—a quest that provided much of the material for her new book, Something Beautiful Happened.

Yvette traveled to Greece, knocked on doors and asked everyone she could think of, but she kept reaching one dead end after the other.

She then reached out to the Holocaust Museum in Jerusalem, who provided her with the name of the man who became Spera’s husband. When the museum said that was all the information it had, Yvette thought she had hit another dead-end—until she typed that name into the genealogy platform MyHeritage.com.

A family tree popped up, but Yvette couldn’t get much more on her own. That is when the owner of the website, Gilad Japhet, whom Yvette called a ‘brilliant genius’, stepped in, and through the ‘most brilliant detective work worthy of Sherlock Holmes’, found more information about Savvas’ descendants. 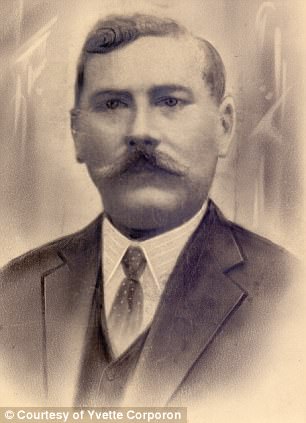 Relatives: This portrait of Savvas hung on a wall in Rosa’s son’s apartment. He had no idea who this man was until Yvette told him

Thanks to Gilad’s work, Yvette ended up finding Spera’s step-granddaughter, who turned out to be a television executive as well, based in Los Angeles.

Yvette called a friend of hers, who at the time worked at CBS, and amazingly, it turned out that woman knew the step-granddaughter.

‘Our worlds collided,’ Yvette recounted. ‘We have friends in common and she works in the same industry as me, so I reached out. And she had no idea about her grandmother’s past, because like so many Holocaust survivors, her grandmother never talked about the war.’

Later on, Yvette located more family members, and discovered that Rosa had two sons and three granddaughters in Israel, with whom she managed to get in touch via Skype.

‘They had no idea of the shared history because Rosa never discussed her story with her family,’ she said. ‘She was so traumatized by losing everyone and by going through her entire life feeling like the Nazis were still searching for her that they were never allowed to ask about her past.’

Ultimately, Yvette, Spera’s step-granddaughter and Rosa’s descendants had an emotional reunion in Corfu in June 2015. Together, they explored the island’s Jewish quarter, visited a synagogue, and had a ceremony honoring the islanders in Erikousa.

But while Yvette was experiencing the joy of reuniting with Savva’s relatives, tragedy struck her family when, just three days after she located Spera’s step-granddaughter in April 2014, her cousin’s son was shot and killed by a neo-Nazi.

Reat Griffin Underwood was 14 years old when he headed to a singing audition with his grandfather, Dr. William Lewis Corporon, 69, at the Jewish Community Center in Overland Park, Kansas.

Before leaving for the audition, Reat, a dedicated singer who has been practicing with a vocal coach, sang Lulu And The Lampshades’ Cups, also known as You’re Gonna Miss Me, for his mother Mindy. 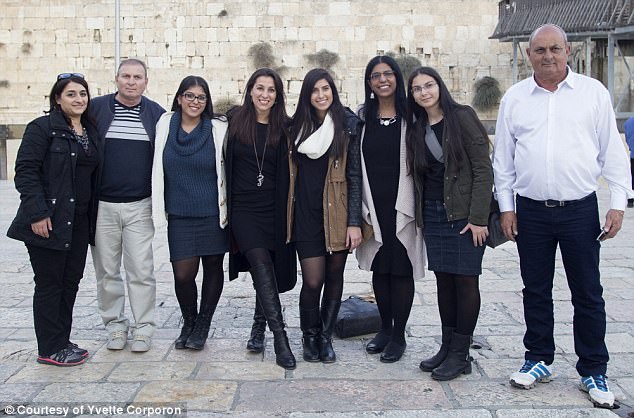 Years later: In her adult life, Yvette launched a search for Savvas and Rosa’s relatives. She is pictured, fourth from left, visiting the Western Wall in Jerusalem with Rosa’s family 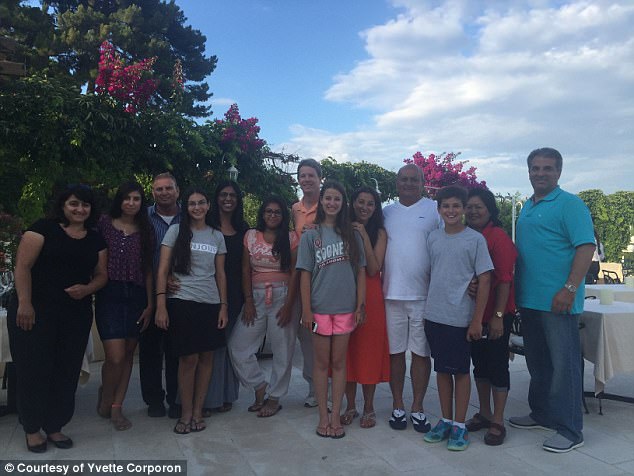 Emotional: Yvette has a tearful reunion with the descendants in 2015. Her family is pictured with Rosa’s relatives during their gathering in Greece

As Bill drove Reat to the audition, a man named Frazier Glenn Miller Jr shot them before driving to a Jewish retirement community and killing Terri LaManno, a 53-year-old woman who was visiting her mother.

Miller, who according to authorities shouted ‘Heil Hitler’ during his arrest, did a Nazi salute in court after being convicted of the killings. He has been sentenced to death and is currently on death row.

‘There’s nothing more tragic than hearing the story of a child being murdered, and the fact that there are neo-Nazis still in the world today and the fact that to this day and in this country they are marching freely on the street is just something that I can’t wrap my head around,’ Yvette said.

‘But I will say this: during the Holocaust in Greece, my grandmother stood up to evil and hatred and risked everything to do the right thing.

‘And today in Kansas, Mindy, who lost her dad and son has stood up and refused to let hate have the last word. They’re doing everything in their power to make sure it doesn’t happen again, but sadly it continues to.’

Yvette condemned Donald Trump’s statement that there were ‘very fine people on both sides’ during the white supremacist protests that left 32-year-old Heather Heyer dead in Charlottesville, Virginia, last month.

‘First and foremost, there are no good Nazis. Let’s be very clear and united in that fact,’ she said.

The man who killed Reat, she said, was part of an undercurrent she always knew existed, but was once confined in the ‘shadows’.

‘But now they are emboldened, and they are marching on the streets of our country, and in no uncertain terms we need to make it very clear that this is not OK here,’ she added. ‘We are not going to tolerate this. This is not acceptable in the United States of America. Or anywhere in the world for that fact.’

Yvette’s children, who are now 13 and 16, were nine and 12 years old on the night of Reat and Bill’s murders. They had just witnessed the search for Savvas’ relatives, and their mother’s happiness and joy when she had found one of them. She had told them her grandmother’s story and used it as an example of goodness winning. 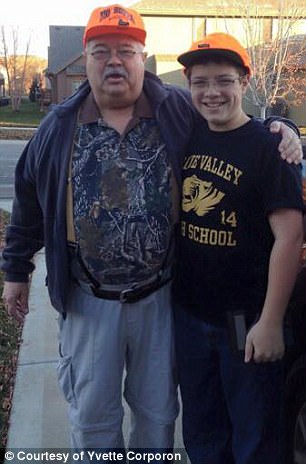 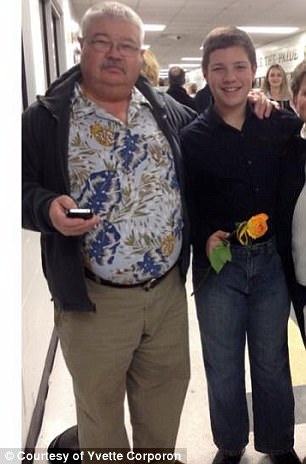 Heart-wrenching: In 2014, Reat Griffin Underwood, 14, the son of Yvette’s cousin, was shot and killed by a neo-Nazi in Kansas along with his grandfather, Dr. William Lewis Corporon, 69 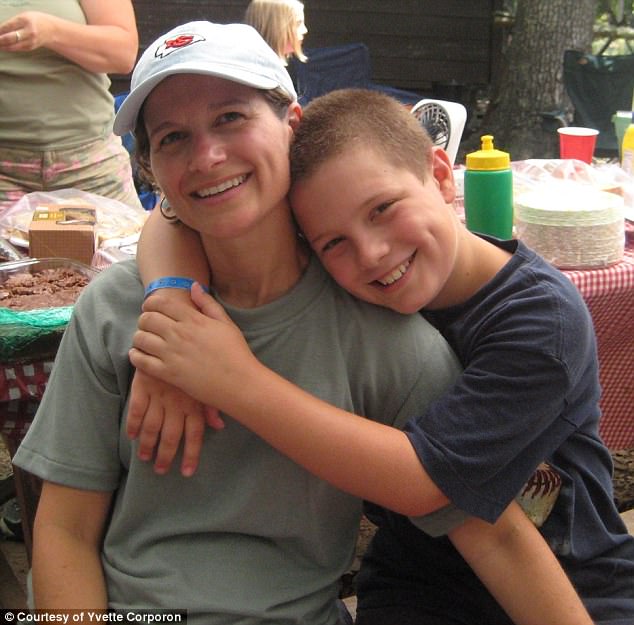 Example: Yvette cited her cousin Mindy (pictured left with her late son Reat) as a source of inspiration as she urged others to speak out against hatred

But on the night of the murders, Yvette climbed into bed with her son, who asked her: ‘I don’t understand, Mom. You told me the Nazis were gone, that the family was saved. How could this happen?’

Discussing hatred with her children, the mom said, is ‘very difficult’, because she struggles to explain it to them.

‘How do you rationalize the irrational?’ she wondered. I can’t explain hate because I don’t understand it, but all I do is continue to tell them that we have to make sure that something good comes from this.

Urging others to speak out, Yvette cited Heather Heyer’s mother, as well as her cousin Mindy, as sources of inspiration. Mindy, she said, travels around the US with her foundation, Love Always Wins, to do educational and advocacy work.

‘Her mission is to educate people about interfaith awareness, make sure people learn about other religions, other races, other ethnicity, to bring people together,’ Yvette said.

‘Because the more we know about each other, the more we realize we’re more alike than different.’