Woman told she was infertile because of endometriosis has three children

A woman whose endometriosis is so severe it fused her organs to her body has beaten the odds to have three children, despite being told she was infertile.

Leah Lewin, 34, was 17 when doctors told her she would never have children due to stage four endometriosis, the severest form of the condition, which causes rogue tissue normally found in the uterus to grow elsewhere in the body causing crippling pain and infertility.

The business consultant from Corby, Northamptonshire, regularly spends weeks in hospital but incredibly she and her British Army Staff Sergeant husband Kenny, 38, have been able to have a family.

The couple became pregnant after five rounds of fertility treatment with their first child Xavian, now seven, when Kenny arrived home from Afghanistan.

Leah Lewin, 34, who was told she would never be able to have children due to severe endometriosis, with her daughter Zaria, 18 months, husband Kenny, 38, Xavian, aged seven (front right), and five-year-old Kairo 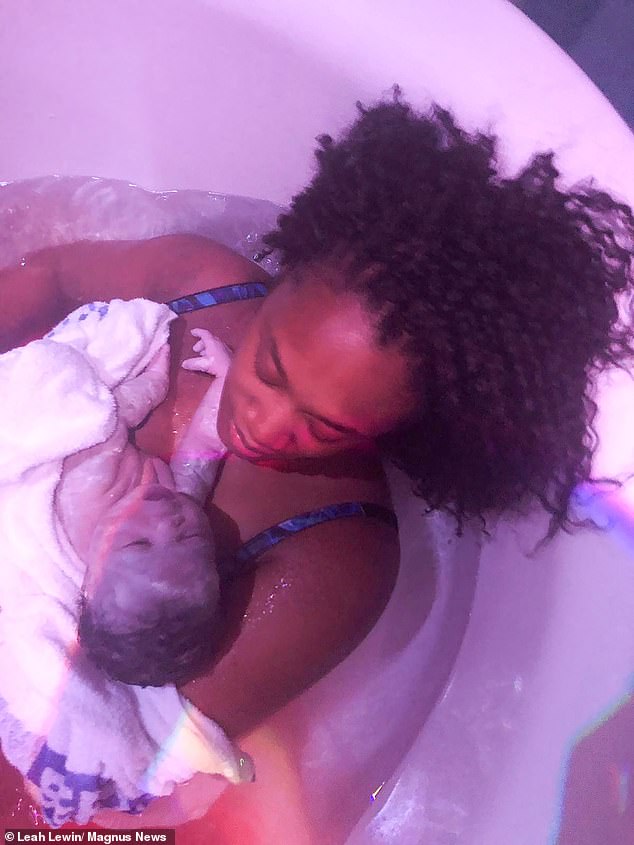 Leah, who also parents stepson Jai, 18, still suffers severe bouts of a pain from her endometriosis and was hospitalised just last week with a suspected stroke.

As well as her physical battles, Leah has had to overcome the mental pressure of being told she was infertile and raising a family with a partner often away serving the country.

And now she wants to help fill the gap in emotional support many mothers feel before and after pregnancy by launching OBS, OBSessed with improving support for mums.

An initiative which aims to offer a ‘village’ of women to support every new mum. 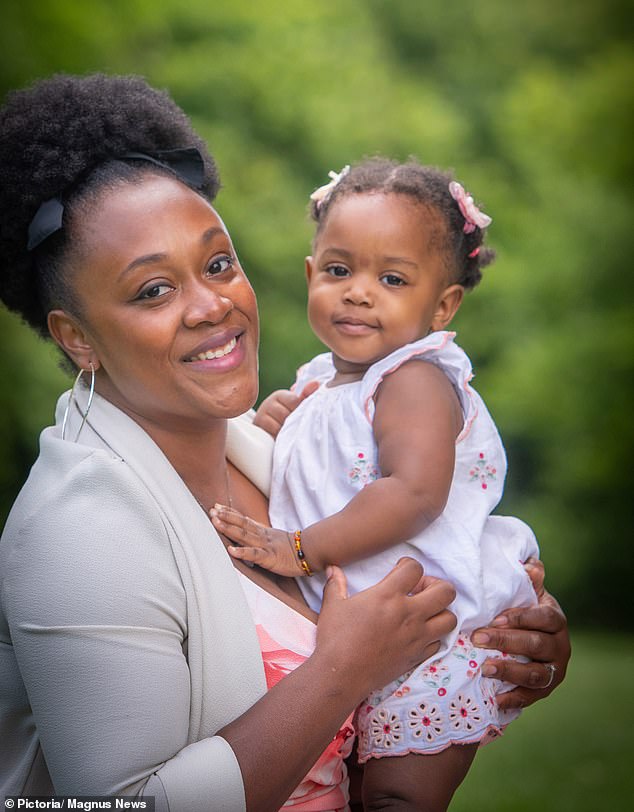 Leah Lewin, 34, and her youngest Zaria, 18 months. Despite being told at 17 she would never have children and battling severe health complication, Leah was able to conceive

Leah said: ‘I was told from a very young age, 17, I would never have children, and now I have four.

‘I have stage four endometriosis, I know the hell that people go through, it’s a horrible disease and it’s incurable.’

Leah was admitted to hospital just last week in agony from the condition and doctors feared she had suffered a mini stroke.

In March this year she suffered another attack which caused her to lose feeling in her legs.

What is endometriosis? How the disorder results in pelvic pain and internal scarring

Endometriosis is an often painful disorder in which tissue similar to the lining of the uterus – the endometrium – grows outside the uterus.

It most commonly affects the ovaries, Fallopian tubes and the tissue lining the pelvis.

The primary symptom of endometriosis is pelvic pain although many women also experience cramping during their menstrual cycle.

Often misdiagnosed, many women only discover they have the condition during infertility treatment.

Approximately half of women diagnosed with endometriosis have difficulty getting pregnant.

While studies about the link between endometriosis and miscarriages are still ongoing, newer research suggests that the condition can leave sufferers at greater risk of having a miscarriage.

She said: ‘I woke up one morning and couldn’t feel my legs, I was in a lot of pain and as I tried to get out of bed I just collapsed on the floor.

‘The ambulance staff were amazing, I’ve had to call an ambulance multiple times when I have collapsed, and this time they were here in what felt like seconds. They carried me down two flights of stairs while keeping me on gas and air.

‘I was working at an event at Leicester Tigers one time and I collapsed in the middle of the pitch, luckily it’s around the corner from the hospital.

‘Before that there was a time I collapsed with severe pain. My dad came and rushed me to hospital, and they said to me “How have you been walking?”. 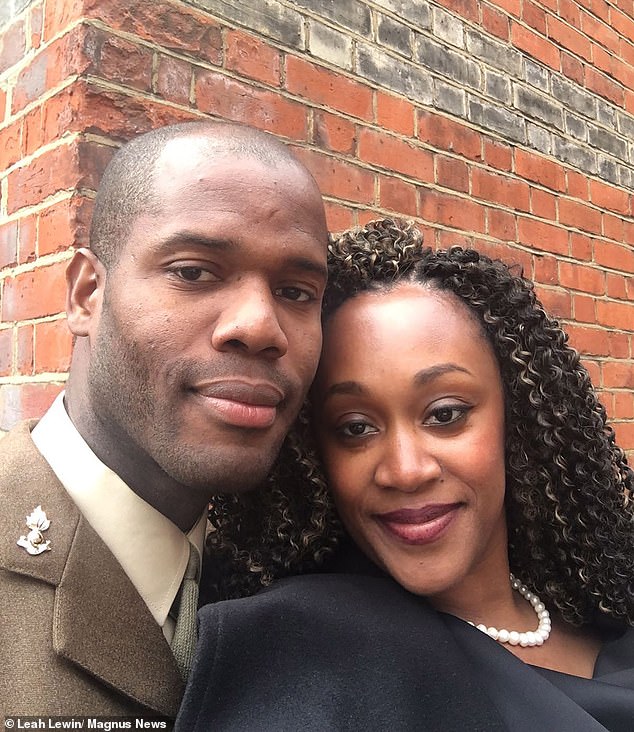 Leah’s husband Kenny is a British Army Staff Sergeant who is often away for work, and now she’s set up a support service for mothers based around the principle that it takes a village to raise a child

‘They said some of my organs had fused together and attached to the back wall of my body.

‘But I was walking hunched over I thought because of the pain but it was because where these organs had fused together, I couldn’t straighten up because it would tear.’

Leah has had to register as disabled because of the effect of endometriosis on her body.

But what the condition hasn’t managed to effect is Leah’s desire to help offer support for new mums who, like her, might be facing a mental as well as a physical battle.

Leah has launched OBS, OBSessed with improving support for mums, which aims to offer a ‘village’ of women to support every new mum. 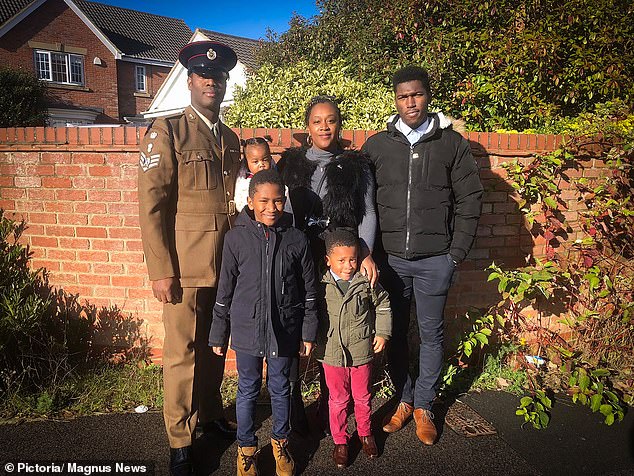 OBS provides emotional and practical support to a mother, much like communities do in the Caribbean where Leah’s family are originally from.

She said: ‘My family are from Trinidad, and it’s similar in other Caribbean countries, in Africa, and in Indian tradition as well, there’s a village, the aunties, the friends, all of the women come together and support the woman and her child.

‘It can be practical help creating tinctures and steams and giving her massages, and they help her heal as she is learning to adapt to being a mum.

‘They support her as she’s feeding the baby, carrying the baby and learning to look after this small little person that’s just like you but cries a lot and needs you to keep them alive.

‘I wanted to bring back the village, that’s what we don’t have anymore, that natural support system of women that feel and understand and have the skill set to be able to take care of you maybe in the way a husband can’t, or if she’s a single woman.’

Leah said learning from her own family history made her understand how vital that female support network could be to a new mum.

Her teams will be able to visit parents and provide the support both practical and emotional that is difficult to provide for health professionals.

She said: ‘Say we know a mum and she’s usually got her hair in a messy bun,

‘She’s not putting on make-up, but she’s dressed, and you know that she’s generally a positive person

‘And one day if we turn up to her door and she’s in tracky bottoms, and she’s got bags under her eyes and you can notice a difference in her character, we have a team of people that are now trained to be able to; a) pick up on that and, b) give her the support that she needs.

‘Even if the woman says “My husband’s at work, I’ve got three other kids and seven piles of laundry to do”, we can do a load of laundry, we can hold the baby while she’s in the shower.’

Ken and Leah’s youngest Zaria was born in February last year and despite the joy of another pregnancy, Leah was suddenly floored by a wave of depression which started before the birth.

She said: ‘I suffered with depression when I was younger, and I thought I was past it because I’m positive, I do yoga, I live in a chemical-free eco-friendly home, I thought I wasn’t going to get depression.

‘I thought I would never get depressed again, but more fool me, and I thought “I’ve had kids before it’s not going to affect me”, but I was really wrong.’

Leah said many women don’t realise you can get depression before you have the baby. Eventually she sought help after speaking to her husband, but something still wasn’t right for her.

She said: ‘I still wasn’t me, and I really struggled to explain it to my husband or anyone, I felt like I was on the outside of me watching me on a daily basis.

‘I was really embarrassed because I run a business and everyone in the business community looks at me like she’s the one who’s got her sh*t together.

‘And I thought at that moment in time I didn’t.’

Leah said despite therapy she decided to stop going and passed a cognitive behavioural therapy course (CBT) herself to see if it would help her understand.

This was the first time Leah began a group which would later become OBS – Mums Club and she was stunned by the reaction she received from other women.

She said: ‘The more I was talking openly about the way I had felt, the more women were saying to me, “Oh god, me too”.

‘They would break down and confide in me and they were calling for support, they just needed somebody or something.

Her own experience of being an Army wife she said gave her insight into how anxious a mum can get, especially as Monday to Friday she was often by herself.

She said: ‘I would think “I need to go and have a shower”, but my baby co-sleeps and she exclusively breastfeeds, I can’t leave her because I can’t hear her when I’m in the shower.

‘My teenage son is at athletics, the five and seven-year-old can’t help, and it got to the point where I was getting in the shower at 1am during the week just because I knew she would be asleep.

‘I was exhausted, but I had to shower. It’s little things like that, I know it’s only a five-minute task, but if I did it during the day and I came out and heard my baby screaming because no one was there, it’s horrible and it really pulls on your heart strings and you feel extra mum guilt.

‘But it’s different you know someone like OBS are coming over for three or four hours today, they can put the washing on or hold the baby while I nip in the shower, or help my other child with her homework.

‘All of those little things that we all have to juggle, but when it’s constant all day every day it adds to the pressure and anxiety of being a mum, which we don’t talk about.’

Leah said she even had mums who felt anxious about medical advice because they might have Googled a medication and it told them it might be bad for their child.

She said: ‘I posted on my Facebook group anonymously on behalf of someone who was worried about a medication and breast feeding and it turned out three of the woman had taken that medication and they were fine and their baby was fine so this woman was now fine, that’s the power of the village.

‘It’s easy to take a “Yes it’s fine” from the woman you know has taken the medication and has two kids, than it is from the male doctor who has never been pregnant who says it’s fine.

‘That’s not to disregard the doctor’s qualifications, but it’s just the way it goes.

‘I’ve spoken to health visitors, midwives and the GPs, and they are all happy to support and provide the information in the packs they give to pregnant women.

‘The midwives were also coming along to our groups and bringing their pregnant women with them.

‘But we had to stop for corona as everybody did. So now I am aiming to relaunch for September and make sure all the groups are ready.

‘I’ve got a counsellor that is a real strong advocate for women that have been through trauma, from an abusive partner or bereavement

‘Her education came from her trauma, similar to my story, and those are the people who are really invested because they know how it feels.’