Woman trafficked across county lines from the age of 11 reveals she was raped by more than 1,000 men

A woman who was trafficked from the age of 11 has revealed how she was raped by more than 1,000 men between the ages of 14 and 20.

The mother, who lives in a city in the south of England, has told her story under the pseudonym Emily Vaughn in the harrowing book ‘Enslaved: My True Story Of Survival’, published by Harper Collins.

Emily’s story provides a stark account of how predatory ‘stepfathers’ target single mothers with teenage children who they can exploit, alongside their circle of friends.

It details how her best friend’s stepfather took her across county lines to deliver drugs aged 11, which sparked a chain of events that sent her life into a downward spiral, after being expelled from school for dealing drugs.

Emily was homeschooled for a period by her mother and when she was 14, started a childcare course at college, where she met a friend who groomed her to have sex with men for drugs.

Then another man called Yusuf – the boyfriend of her friend’s mother – started trafficking her to different areas to have sex with strangers.

‘I worked out that if I’d been raped by two men, three times a week, then this would equate to 312 men each year,’ writes Emily. ‘Even by this conservative estimate it would mean that over that five-year period I had been raped 1,560 times.

‘Sometimes the rapes would include eight or more men at a time, so it’s difficult to calculate a precise number.’

Emily, who still suffers with flashbacks, hopes that sharing her story will help other women who have been victims of grooming, abuse, trafficking and modern slavery.

In her book, details including names, places and dates have been changed to protect the family’s identity.

A woman who was trafficked by her best friend’s stepfather from the age of 11 has revealed she was raped by more than 1,000 men between the ages of 14 and 20 (stock photo)

Emily explains how she was 11-years-old the first time she was taken across county lines on a drug deal with her friend Ashley’s stepfather, Barry. Ashley, who was only 10 at the time, went with them.

Emily had always felt like an outsider at school because other children teased her and called her names.

She credited Barry with her growing confidence, saying she felt like she’d grown up overnight when she was doing drug runs with him.

Emily had always hated school, but her work with Barry ‘opened her eyes to a whole new and exciting world’, which left her hating education even more.

She played truant, bunking off school regularly, and when she did attend, Barry used her to deliver drugs to other parents through their children.

‘I didn’t care if I got caught with drugs at school – I didn’t care about much any more because I was out of control and didn’t want to be there,’ Emily says.

‘Word got around and soon the other kids knew that if they wanted drugs they needed to come to me.’ 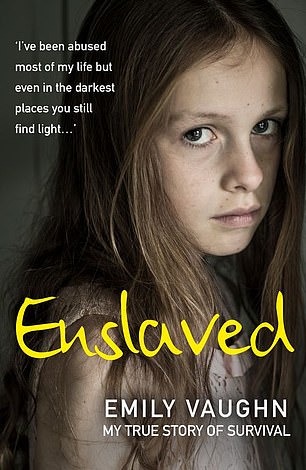 Emily Vaughn’s harrowing book Enslaved: My True Story Of Survival details how she was used as a drug mule, delivering drugs across county lines, before she was trafficked for sex

After Emily was expelled from secondary school and homeschooled for a few years, she started attending childcare classes at the local college when she was 14-years-old, which is where she met two new friends, Andrea and Bronwyn.

The first time Emily went Andrea’s house after class, they went to the promenade, which was where teenagers hung out.

When a car pulled up with four men inside – including their friends Phil, Sean and Taz – and Andrea gave Emily a reassuring nod, she took it to mean they were both getting in.

However, Andrea didn’t join her, leaving Emily alone with the four men.

The interior light in the car went off and Emily soon watched her friend disappear behind an ice-cream hut with two shadowy figures.

She recalls: ‘I turned in my seat but Sean had pulled the car door closed, which caused the interior light to go out.’

Emily added: ‘More hands and more fingers were on me, pulling at my top, grabbing the waistband of my trousers and snaking beneath my clothes.’

When the car started slowly moving, Emily says she was begging to be let out and to be returned to the safety of her friend.

Despite trying to break free, she recalls how all three men were ‘pawing’ at her and ‘pinning’ her down.

‘I was crying my eyes out but no one could hear; my pleas had been drowned out by the cheers and calls of the men,’ she says. ‘They began to paw at my body and pull at my clothes like a pack of wild animals.’

When the men were busy arguing over who could go first, Emily managed to twist herself so that she could jump out of the car – before running as quickly as she could.

Emily ran back to where she’d last seen Andrea, screaming her friend’s name in a bid to ask for help. But it wasn’t long before the men caught up with her and dragged her to an empty swimming pool.

‘With my face pressed up against blue concrete, multiple hands worked together to anchor me down and pull off my jeans,’ she recalls. ‘I felt the safety of denim leave my skin as the cold bit against it.

‘Somehow, I still had my knickers, although they’d been ripped at the sides and were clinging to my body by a thread. But it didn’t matter; the men didn’t care. Two of them pinned me down and proceeded to rape me at the same time.’

She said that she had to turned her face to the side, allowing herself to drift off and focus on something else, rather than what was happening.

Emily goes on to say how Andrea later downplayed the experience and referred to is as ‘just sex’ – adding ‘that’s what men are like’ and that it ‘gets easier’ after the first time.

Left confused, Emily stopped feeling as grown up as she had previously after helping on the drug runs.

‘I’d wanted to grow up, just not this quickly,’ she writes. ‘It had been my first sexual encounter and I wasn’t sure if it had actually been rape.’ 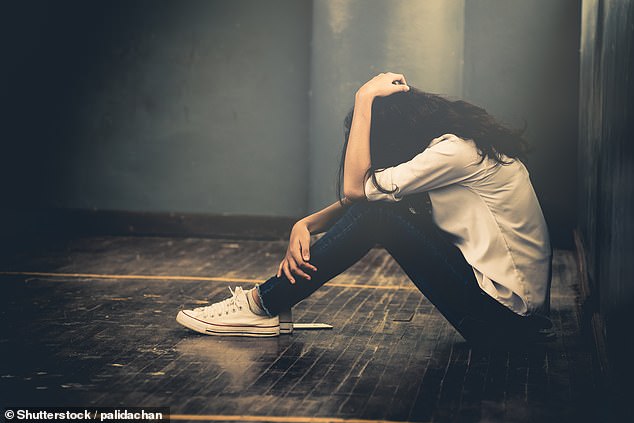 To this day, Emily suffers with flashbacks caused by the abuse she suffered as a child at the hands of countless men and her friend (stock photo)

Emily says things got even worse for her when she was 16, during a trip to Telford.

Her college friend Bronwyn’s mother was dating a man called Yusuf, who took them to a house where ‘nine or ten’ men were waiting to have sex with them.

‘That night I was raped by five men and Bron was raped by the rest,’ says Emily. ‘When they’d finally finished I tried to stand up but my legs gave way beneath me. I was in so much pain that I felt nauseous.’

She continues that it was ‘relentless’ and even more men came in from the door and she was raped over and over, adding that she doesn’t know how many men were there.

Emily said that it didn’t matter how sore she was, and that she overhead discussions between the men, with the charge being £20 for full intercourse and £10 for pral sex.

Meanwhile, Emily was still being groomed by Andrea, who introduced her to multiple men who would have sex with her for free drugs.

She also started to earn money from having sex with men she met while she and Andrea worked as cleaners at an army barracks.

It was at this time that Andrew introduced Emily to self-harming, which she insisted would ‘make her feel better.’

Emily had become addicted to drugs, and would do whatever she could to get her hands on the likes of weed and amphetamines, but Andrea introduced her to a new addiction.

She says Andrea told her to use self harm when she ‘needed to’ in order to ‘control’ her own pain’ – and even offered to cut Emily’s arm for her.

‘Constantly worried’ she’d cut herself too deep or slip with the razor, Emily accepted Andrea’s offer of doing it for the first week until she got the hang of it.

After a week, Emily did it herself under Andrea’s guidance and then Andrea gifted her a brand-new razor blade so that she could do it herself, adding: ‘Now we can do it together.’

It wasn’t the only thing that Andrea gifted Emily from her mother’s medicine cabinet, because when Emily told her that she ‘wouldn’t care if she died tomorrow’, Andrea came up with a plan for them to kill themselves together.

Emily remembers how Andrea gave her various pills and told her they would meet in a park to take them together.

However, Andrea didn’t show and texted Emily to go first – adding that she’d be there soon.

GETTING LIFE BACK ON TRACK FOR DAUGHTER

Later, Emily fell in love, but not before she discovered the father of her child was married and had four children with a woman who lived in Somerset.

When she suspected she was pregnant, Emily was with her sister Lucy and her boyfriend Gareth, who offered her weed.

Emily recalls how Lucy and Gareth started to laugh when she declined the drug, adding that after she decided to have some, the sensation made her feel sick.

Earlier in the book, Emily described how she’d suffered a miscarriage in the college toilets and wasn’t sure about the pregnancy because she had never wanted children.

But she says her mother reassured her that she would look after the baby, should Emily not be up to it.

When she rang her boyfriend Rob to tell him about the pregnancy, he immediately told her to ‘get rid of it’.

His friends came over to their place and offered her cocaine, but Emily turned it down, saying that she wasn’t bothered.

She later realised that she didn’t want to bring her baby up in an environment with drug-taking every other week after a maternal instinct kicked in – especially after Rob accused her of having an affair and becoming violent one evening.

Emily continues: ‘Even though I’d never been the mothering sort I was determined not to expose a baby or any child to drugs.

‘My whole life had been blighted by them; it’d started with Barry when I’d been eleven-years-old, and I knew I could never inflict that on another child.

‘I was clean of drugs now, and had been since the day I’d discovered I was pregnant, and I was determined to stay that way. I owed my baby that, at the very least.’

Emily says that because of what she’s been through, she’s ‘overprotective’ of her daughter and decided to write the book as she approached her 11th birthday.

She said: ‘It took me a while to realise that I was a victim, but now I’m a survivor.’