Woman trolls stranger who tried to role-play with her

A woman who was plagued with requests to take part in a ‘sexy’ virtual role-play by a stranger has taken her revenge by hilariously trolling the ‘creep’.

US based Reddit user TheOwlAndTheFinch had never met the man but had spoken to him briefly on gaming website Steam.

She was shocked when she began to receive unwanted messages from him in the form of invitations to take part in role-plays that were sexually suggestive.

However, after batting off his advances for several weeks she eventually took him up on his offer but not in the way he expected.

In the man’s role-play, which takes place over iMessage, he sends the Redditor detailed descriptions of what he would ideally be doing if she were with him.

In his fantasy he says he is leading his fellow gamer to a ‘bedroom’ but rather than take his lead she interrupts the role-play to alter his plot. 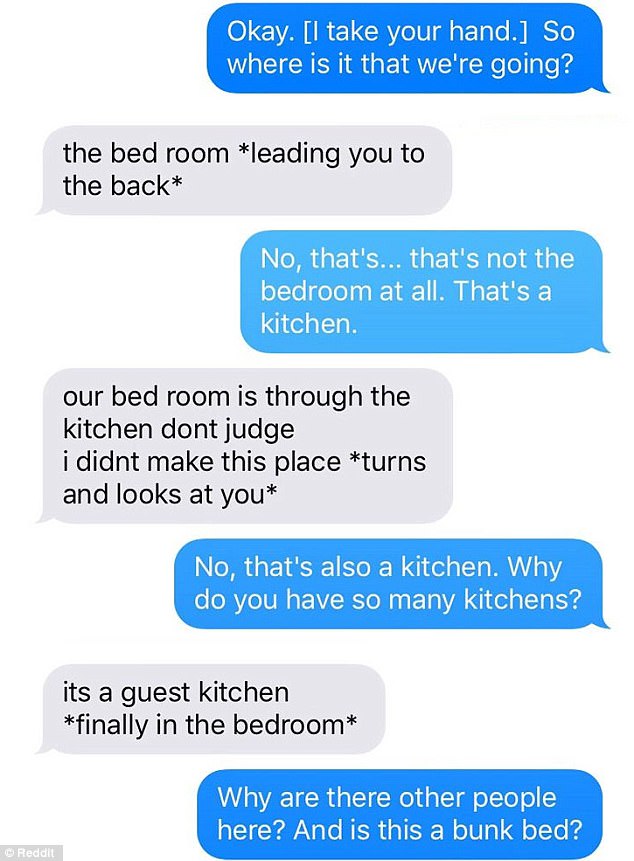 Redditor TheOwlAndTheFinch had been plagued with messages from the man she met online for weeks and eventually gave into his advances, but not in the way he expected 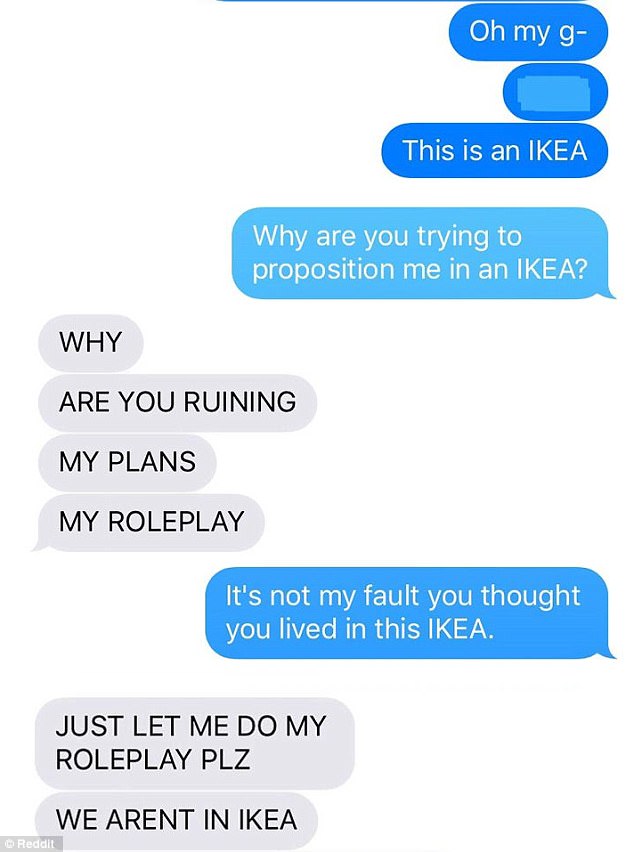 After changing the course of the role-play on several occasions she eventually managed to transform the message thread from a steamy romance to a trip to Ikea, much to his horror

Whenever he messages to say they have ‘entered the bedroom’ she responded pointing out they were ‘in a kitchen’.

And then when finally letting him take her to the ‘bedroom’ she ruins the fantasy further by questioning why he has bought her to an Ikea store, making reference to the surrounding ‘bunk beds’.

Unsurprisingly her take on the role-play does not go down well leading to the man becoming infuriated by her approach.

After sharing their exchange on Reddit, the woman revealed that he had not been deterred and continued to message her, but she had discovered ways to bat away his advances

TheOwlAndTheFinch, who shared their exchange on Reddit, went on to reveal that her efforts were not enough to deter the man, who continues to message her.

However, she revealed she has continued to find ways to deter his advances much to the admiration of her fellow Reddit users.

One came from another woman who admitted to having the same experience with the same man – but luckily had managed to shake him off.