Mother-of-three Natasha Williams was sitting in the bedroom of her terminally ill best friend, Tiffany Walker, in January 2018 when they started to smell smoke. A fire had started in the living room, set off by a candle that had tipped over, caught on a curtain, and quickly erupted into ceiling-high flames and thick smoke.

Walker, though young at 40 years old, was weak with stage 4 cervical cancer. Williams grabbed her arm and the two of them hobbled, forced to walk into blaze to get out the door.

In the process, Williams passed out, and she remembers Walker’s hand slipping out of hers. She deliriously woke up lying in the middle of the road, 75 percent of her skin burned off, with firefighters over her asking if there was anyone else inside.

She passed out again, waking up in the hospital, where she was told Walker didn’t make it.

As Williams grieved, doctors spent weeks trying to patch up her searing wounds with skin grafts, but they were struggling to find enough skin to cover all that was lost.

Eventually, a doctor on her team suggested trying a new, emerging method that stimulates skin cells to regrow.

To Williams’ surprise – and many of the doctors, who did not have much experience with this new technology – it was effective. Williams had to relearn how to walk, talk, write and use her fingers in grueling physical therapy sessions.

In an exclusive interview with DailyMail.com, Williams discusses the sadness at learning that her best friend hadn’t survived the fire, her amazement at seeing her burn wounds covered, and how her treated areas feel ‘just like normal skin’. 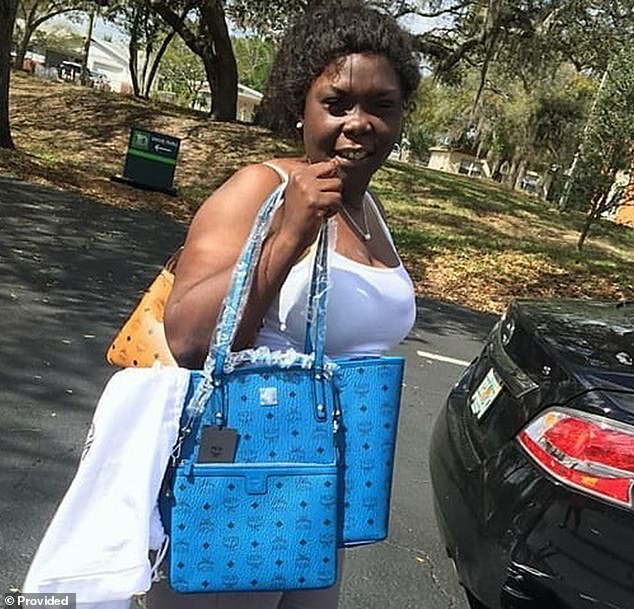 Williams had 75 percent of her body burned in a house fire in January 2018 but her best friend, Tiffany Walker (pictured), lost her life 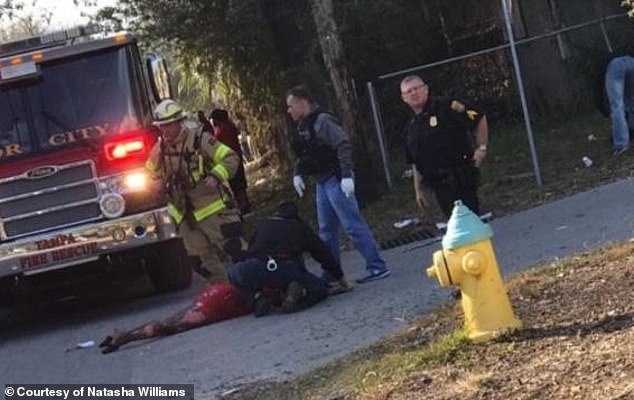 Doctors at Tampa General Hospital said there was an 85 to 90 percent chance Williams would die. She was rushed into emergency surgery and fought her life for the first few weeks. Pictured: Williams being attended to at the scene of the fire

On the morning of the fire, Williams had gone to church and then to the jewelry store Pandora to get a charm for a bracelet for Walker.

‘We were sitting there talking in the bedroom and putting pendants on our bracelets and her mom came to the door of the bedroom and yelled: “The house is on fire!”,’ Williams said.

Finding out that Walker didn’t make it spent Williams into a spiral, devastated and ashamed.

THE COST OF BURN CARE

Roughly every % of the body burned equals another day in the hospital.

Local news reports and Williams’s friends were calling her a hero for trying to get Walker out of the house.

‘I didn’t want to be called a hero because a hero is a person that saves people, and I didn’t save her,’ Williams said.

Paramedics rushed Williams to Tampa General Hospital, where doctors determined that 75 percent of her body had been burned.

Dr David Smith, director of the hospital’s burn center, said Williams had also suffered damage to her respiratory tract and lung tissue from inhaling so much smoke – which worsened her prognosis.

‘Historically, mortality would have been 100 percent,’ Dr Smith, who was on Williams’s care team, told DailyMail.com. ‘Predicted mortality for Natasha was 85 to 90 percent.’

Williams was intubated and rushed into emergency surgery to remove the dead tissue so it wouldn’t cause infection and to stabilize her.

During her time in the ICU, she developed septic shock, acute respiratory distress syndrome – a condition in which fluid collects in the lungs’ air sacs and deprives organs of oxygen – and acute kidney injury.

‘During the first couple of months of treatment, there were several episodes where we thought we lost her a couple of times,’ Dr Smith said. 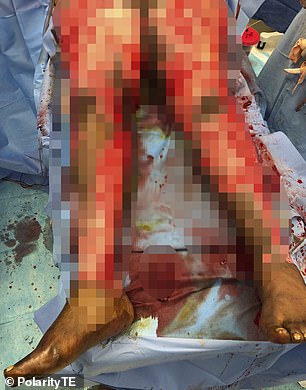 Williams’s medical team performed skin grafts, but there was not enough healthy skin to cover her burn wounds. Pictured: Williams’s legs before being treated

For burns like the ones Williams had, the traditional treatment is split-thickness skin grafting, which involves taking the top layer of healthy skin from a healthy area of the body and transplanting it to the damaged areas.

But 75 percent of Williams’s body was burned, meaning there wasn’t enough healthy skin to close her burned area.

So doctors used the conventional method for her upper extremities and her chest.

Dr Smith said there were other traditional ways to cover the burned areas of her leg, such as artificial skin, but he remembered reading about a product known as SkinTE.

Made by Utah-based company PolarityTE, the product claims to be the first able to regenerate full-thickness skin.

Founder and CEO Dr Denver Lough, who left his plastic surgeon residency at Johns Hopkins Hospital in Baltimore to start the company, said the product can essentially replace a traditional skin graft.

‘If you look at your hand, you see a small shaft of hair. At the bottom of that shaft exists a group of cells, stem cells, in a cluster,’ he told DailyMail.com

‘The cells in that cluster have the potency to regenerate that hair shaft.’

Doctors use PolarityTE’s kit to harvest from their patient a sample of full-thickness skin that contains the outer layer (epidermis) and the layer that has hair follicles, sweat glands, nerve endings and other structures (dermis).

That sample is sent to the company, which separate the cells at the bottom of the hair follicle into several groups of cells.

‘If you can get them to proliferate, that will form new layers of skin because they have tissue memory,’ Dr Lough said.

THE SIX R’S OF BURN CARE

1) Rescue – Removing the patient from the source of injury; getting them to the hospital safely; and triage

2) Resuscitation – Clinically ill patients, with 20% or larger burns, need some kind of resuscitation. With burns, there’s inflammation and you can go into multi-organ failure. We usually put them on life support and this can last 1-2 weeks.

3) Resurfacing – Removing damage tissue and burn wounds. We do about 10 percent of the body at a time. Will begin to cover areas (from cadavers or from pigs).

4) Rehabilitation – This is when we do splinting to prevent contractures. Occupational and physical therapy so they can become more self-sufficient

6) Recovery – How can we get them back to work/school/church, etc.? Managing chronic pain, physiological care, social work

Phases may overlap and that’s why we have burn centers that can provide all six phases, not just one or two

The technique is part of a growing swell of attempts to innovate in burn and skin care, Dr C Scott Hultman of Johns Hopkins Burn Center, who has no connection to SkinTE, told DailyMail.com.

‘The ability to grow skin has been a quest for people in clinical care for decades,’ Dr Hultman said.

‘We could culture plates of skin in the 80s, but that was proven to be too expensive.

‘The promise of this product is the ability to get wounds closed in situ [i.e.: in the patient]. With skin grafts, you biopsy it and often place it back on 10 to 15 days later.

‘So this has the potential to be life saving. The attractive thing is that it can grow sweat glands and hair follicles. Currently, there’s no way to do that.’

But he warns it’s early days, more evidence is needed before it’s endorsed on a national level, and he’s not sure it would be cost effective universally.

‘Everyone is watching this product closely,’ Dr Hultman said, ‘but right now we just have case reports. For large burn wounds, if there’s not enough skin to cover and there are no other alternatives, it has the potential to be life saving.

‘With these newer technologies, some will end up working. We just don’t know which ones.’

For Williams and her doctors, there was little to lose, and they were willing to take the chance.

Before Dr Smith, from Tampa General, could give the go-ahead, he had to get permission from Williams’s family.

Her daughter, Ke-Ziah Fletcher, 22, told DailyMail.com that she got a call from a friend telling her about the fire and raced to the hospital.

‘She was all swollen, she didn’t look like herself,’ she said. ‘I almost fainted and I burst out crying.’

In late February, seven to eight weeks after Williams first arrived in the hospital, the medical team presented the family with the idea of trying SkinTE.

‘My older sister didn’t want to do it, but, after they explained to me how it works, I told her: “This is new technology. If it could help save our mom, maybe we should try it”, Fletcher said.

About two days later, Williams’s family gave the green light for SkinTE to be used on her.

Doctors took a sample of skin from her abdomen and sent it to PolarityTE’s lab. About 48 hours later, they received seven centimeters of skin tissue.

Dr Smith said they separated the tissue in two pieces, diluted them with saline and applied it directly to Williams’s wounds. Just like with a traditional skin graft, they applied dressings to keep it moisturized. 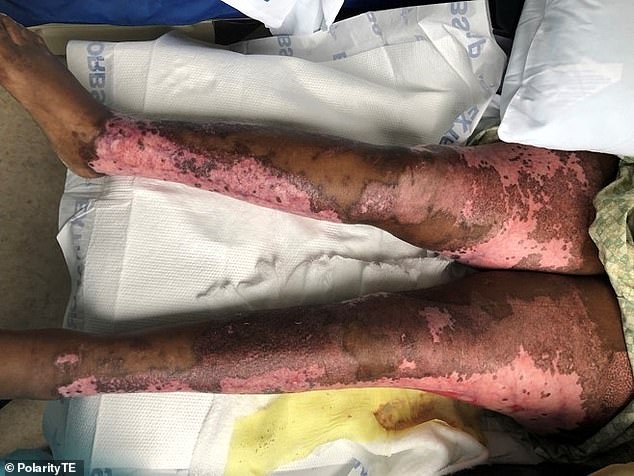 One of her physicians recommended a new product, SkinTE, which regrows functional, full-thickness skin using cells at the bottom of shafts of hair that have stem-cell like properties. Pictured: Williams’s legs 66 days after SkinTE treatment, April 2018 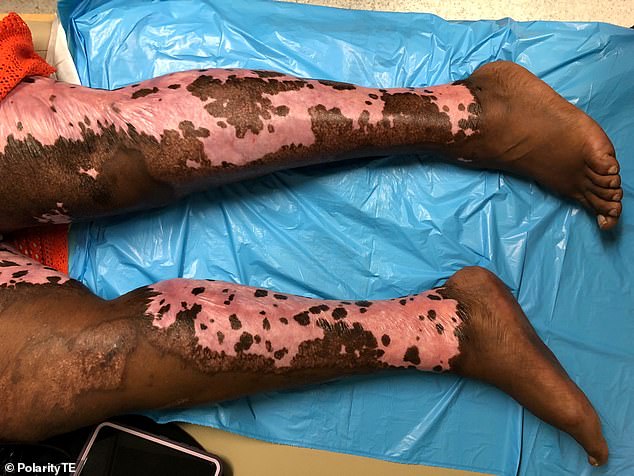 Dr Smith explained that the skin-grafted areas will always be a different color than the healthy skin on her legs because the skin used for the graft came from her stomach.

‘It’s very pale because the abdomen is lighter than anywhere on her body and has fewer pigment cells,’ he said, referring to the area which was skin-grafted, compared to the rest which will re-pigment over time.

Williams didn’t see her legs for the first three months that she was in the hospital because doctors kept them wrapped in dressings to prevent infection and speed up the healing process.

‘I didn’t see my legs when they were all pink and red, but I was blown away when I saw them,’ she said. ‘I thought: “Thank you God. Thank you God for keeping me alive”.’

Williams started walking again about three weeks before she was discharged from the hospital. 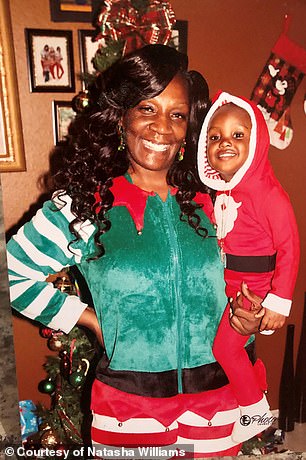 Areas of Williams’s legs treated with the product now have blood vessels, sweat glands, some nerves, just like healthy skin. Pictured: Williams with her grandson in December 2017, before the accident

‘It was difficult. They taught me how to write, how to talk, how to use my fingers again,’ she said.

She went home in April 2018, eight weeks after she received the SkinTE treatment. Within a week, she was walking without a walker.

Her daughter, Fletcher, says Williams can now bend her arms and legs all the way, she can write, and she can walk up and down stairs.

Williams said she feels no pain except in her right foot if she stands for a long time or walks a long distance.

Dr Smith, from Tampa General, says that the SkinTE-treated areas didn’t show ‘well-defined skin elements’ for several months, but that changed when they performed a biopsy in December 2018.

‘We started to get really excited. There was well-defined collagen, epidermis, blood vessels, sweat glands, some nerves,’ he said.

‘For all intents and purposes, it was skin. When you put it between your fingers, it has an elasticity to it.’

Williams said that although it took her a long time to be comfortable with her scars and her skin being different shades, she said she now feels very confident showing off her legs.

‘I feel like I am a living miracle,’ she said. ‘I want other people who’ve been burned to know that you don’t need to be ashamed of your scars.’