A woman passed through an electronic border gate using her cousin’s passport, it has been revealed.

Inspectors witnessed the apparently unintentional ‘spoofing’ during observations at Stansted Airport in Essex.

The watchdog report said: ‘A passenger managed to gain entry via an e-Passport gate using her cousin’s passport.

‘However, when the cousin tried to use the first passenger’s passport she was rejected, twice, at different gates.

A woman passed through an electronic border gate using her cousin’s passport, it has been revealed. File photo

‘At this point, the first passenger returned to the gates to hand the correct passport to her cousin.’

The incident was spotted by a monitoring officer who intercepted the two passengers, who were re-directed to a staffed immigration control desk.

First introduced in the UK in 2008, around 240 e-Passport gates are in operation around the country, covering 21 air and rail terminals.

The Government says they help speed up arrivals and improve border security.

They can be used by UK and EU citizens, as well as those from some non-European countries, who have a ‘chipped’ passport.

The gates use facial recognition technology to compare the passenger’s face to a digital image recorded in their passport. 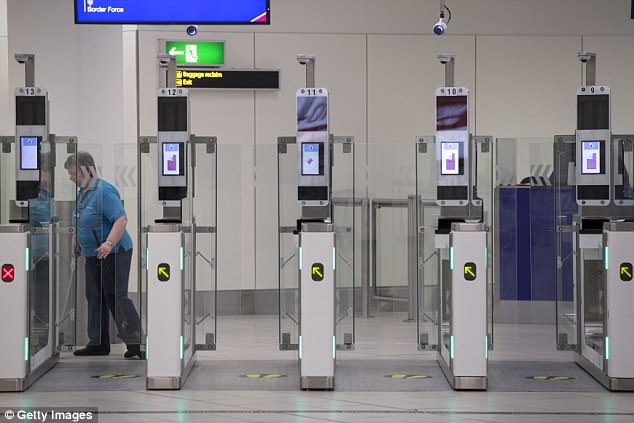 The incident was spotted by a monitoring officer who intercepted the two passengers, who were re-directed to a staffed immigration control desk. Pictured, file photo shows e-Passport gates at Gatwick Airport

Details are also checked against a range of immigration and security watch-lists.

Once the checks have been completed and cleared, the gates open automatically.

Border Force officers monitor the system and any travellers rejected by the gates are directed to staffed clearance desks.

In June 2016 the number of e-gates at Stansted doubled from 15 to 30 – more than any other UK airport at that time.

The report from Chief Inspector of Borders and Immigration David Bolt said monitoring officers at the airport sit or stand behind desks situated beyond the e-passport gates, watching via computer screens.

The review, published by the Government on Wednesday, said: ‘Staff described the monitoring officer’s primary function as ensuring that passengers did not ‘tailgate’ (where two or more persons entered the gate together) or try to ‘spoof’ the system (for example, by holding a photograph up to the verification camera).’

E-passport gates enable Border Force to process passengers considered ‘low-risk’ for immigration purposes quickly and with fewer staff than would be required if they had to pass through staffed desks, the report said.

It added: ‘Staff at Stansted told inspectors that without the e-Passport gates Stansted would ‘fall over’.’