Woman weeps as she is jailed after being caught hiding a shotgun and £16,000 worth of cocaine

A woman wept as she was jailed for seven and a half years after being caught hiding a loaded sawn-off shotgun and £16,000 worth of cocaine in her loft for a drugs gang.

Amanda Morrison, 45, was pressured by gangsters to hide the shortened BSA Snipe single barrelled gun in her loft after she got caught up in a drugs racket.

She was ordered to store the gun as well as 14 rounds of ammunition after the hoodlums befriended her through her partner and gave her crack cocaine.

Police raided her flat in Ashton-under-Lyne, Greater Manchester, following a tip off that drugs were being stored and distributed from the property.

Amanda Morrison, 45, was pressured by gangsters to hide the shortened BSA Snipe single barrelled gun in her loft after she got caught up in a drugs racket

Morrison confessed to detectives that the gun had been in her attic for a year and officers discovered it wrapped heavily in plastic.

Cocaine worth £16,000 and with a purity of 78 per cent was also seized in the bust along with weighing scales and an addicts’s ‘debtors list’.

She was arrested alongside two men. Charges were dropped against one and the other suspect was ordered to face trial on other matters.

Morrison, who is originally from Scoutstoun, Glasgow, initially pleaded to be spared a mandatory minimum five-year jail term imposed for firearms offences.

She pleaded ‘exceptional circumstances’ but her DNA was found on the trigger of the gun and the cartridge cases.

She claimed the gun belonged to one of the arrested men.

At Minshull Street Crown Court, Manchester, Morrison, who had no previous convictions, broke down in tears as she was given five and a half years jail for possessing a prohibited weapon.

She was given a further two years for possessing Class A drugs with intent to supply to run consecutively. She pleaded guilty to both offences.

Sentencing Judge Tina Landale said: ‘You have endured a difficult life which has been dominated by very serious abuse by men and the effect of that abuse likely made you far less able to resist pressure by those who brought these items into your home.

‘You were used by them – no doubt you were an easy target for them.

‘But you were the custodian of a lethal, modified and fearsome weapon with ammunition.

‘The gun had been in your possession in your loft for a considerable period of time although I take into account the full admissions you have made which some may describe as “brave” and the fact the gun was not for your own use. 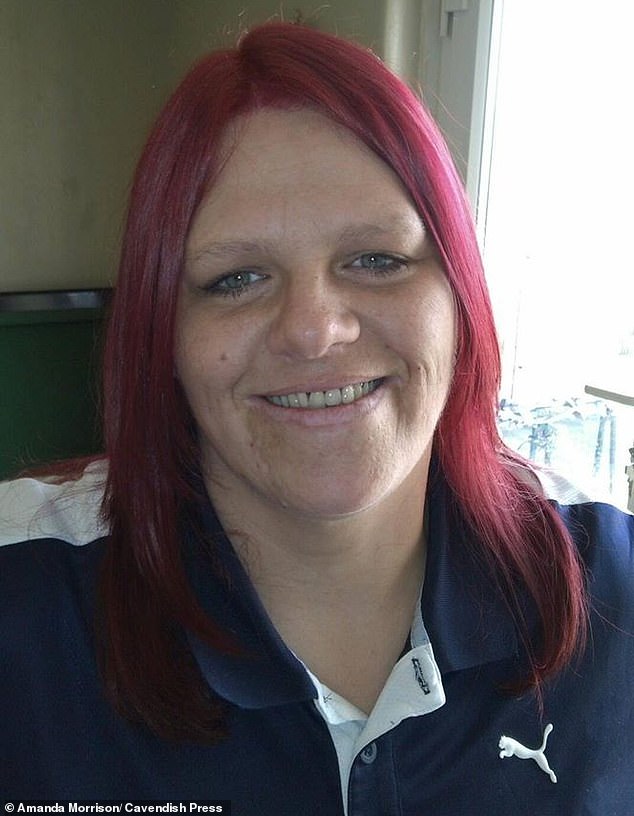 Cocaine worth £16,000 and with a purity of 78 per cent was also seized in the bust along with weighing scales and an addicts’s ‘debtors list’

‘You were holding the gun for another person and it is clear that it had no lawful purpose whatsoever and is capable of inflicting death to more than one person.

‘You played an important and significant role in the drugs trade of cocaine and although the profit was not for you, you were keeping those drugs at home for others who would profit out of this miserable trade – a trade you will be well aware of because you are a victim of it.’

The court heard the 8am raid took place on May 1 last year when officers executed a drugs warrant.

Robert Elias prosecuting said: ‘Morrison said there was a shotgun in her attic, a search took place and a heavily wrapped up package was discovered which contained a gun with 14 shotgun cartridges.

‘Serial numbers on the gun had been partially removed and it was a fearsome weapon which had been shortened to make it even more deadly if used indoors.

‘At the flat Morrison told officers: “It’s been up there for a year and I’m going to get battered for saying that – but I don’t know anything more about it.” However subsequent analysis of the gun found a DNA profile from Morrison on the trigger and on the cartridge cases.’

Snap bags containing 200 grams of cocaine which was waiting to be cut ahead of being sold were seized along with mobile phones, three sets of electronic scales and a debtors list. 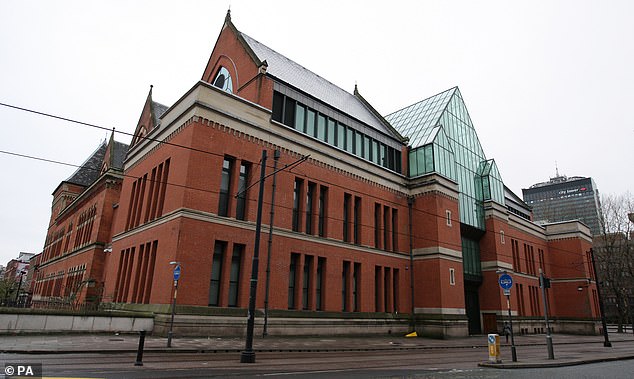 At Minshull Street Crown Court, Manchester, Morrison, who had no previous convictions, broke down in tears as she was given seven and a half years jail

In mitigation defence counsel Miss Katherine Pierpoint said: ‘She has never been before the court before and is of previous good character. Miss Morrison through an ex-partner became friends with a number of men who clearly were not friends of hers. She began to use drugs and found herself in debt to these men and as a result of that, pressure was put on her to store drugs at her address.

‘She was involved on occasion in in bagging up the drugs but her benefit was not cash but drugs for herself. She was extremely open about how long this had been going on. She didn’t try and make things up and suggest these items were in the property for a short length of time.

‘This is somebody who because of her drug use has been used by others and very sadly those who are involved in serious crime have access to firearms and that is how this gun was put in her loft.

‘Like many women in her situation she has been used by others, mainly men over the entirety of her life. She had a difficult upbringing and was involved in a number of violent relationships.

‘She is not somebody who is linked to serious and organised crime. Others took advantage of the fact she has her own addiction and problems. She wants to return to her native Scotland where she will be able to live with her mother and never come before these courts again. She has shown a level of insight and remorse for what she has got herself involved in.’