A businesswoman who went up seven bra sizes in just three years and suffered crippling physical pain as a result has been denied breast reduction surgery on the NHS.

Beth Coldrick, 37, from Dorset, went from a 34D bra size to a 40HH in three years because of medication she was taking for Ulcerative Colitis and Crohn’s Disease, collectively known as inflammatory bowel disease (IBD).

Although her large breasts cause her immense physical pain as well as anxiety, the NHS have three times refused to allow her to have breast reduction surgery.

She has already had four life-changing operations for IBD that cost more than £70,000 but now Ms Coldrick is trying to crowdfund £7,000 to get the reduction done privately so she can live pain-free.

Beth Coldrick, 37, went up seven bra sizes in just three years because of medication she was taking. Pictured: Ms Coldrick with a 34D size chest before she started the intensive course of medication 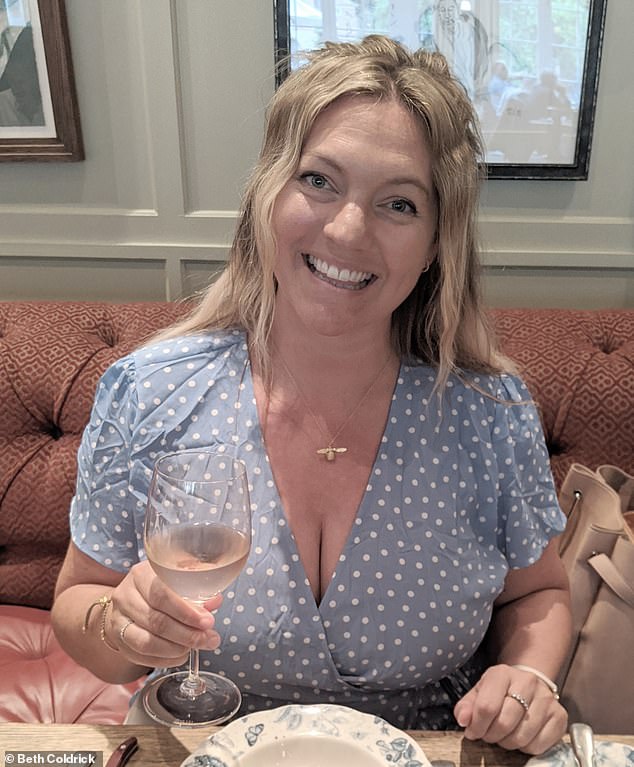 She had to take drugs and steroids including prednisolone and vedolizumab for 40 weeks out of each year for three years as she had Ulcerative Colitis and Crohn’s Disease, collectively known as inflammatory bowel disease (IBD). Pictured: Ms Coldrick after three years with a 40HH chest 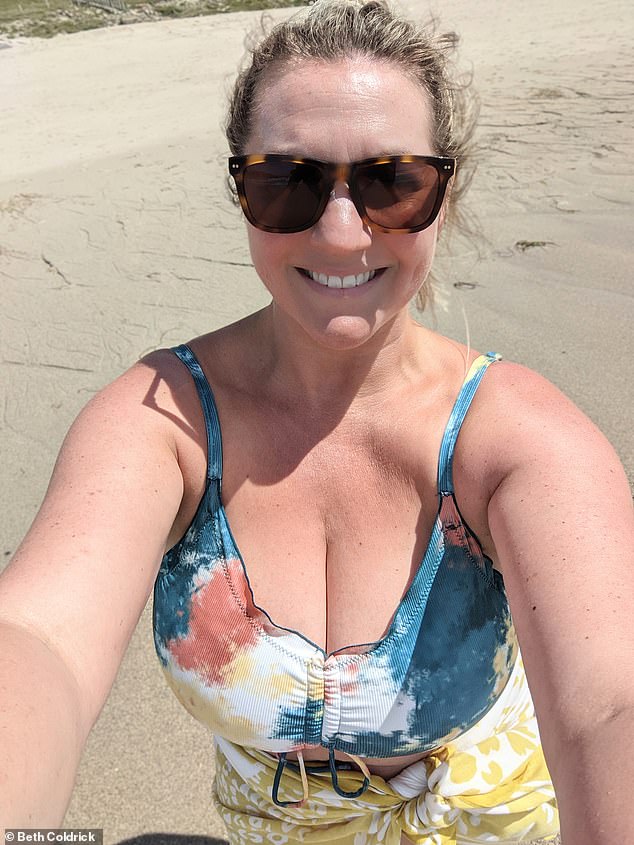 Ms Coldrick, who runs a skincare business in Dorset, told MailOnline: ‘About three years ago I hit rock bottom. I had to have surgery and now I have a stoma.

‘Because I have been on all those drugs and steroids for all these years my breasts have increased dramatically in the last three years.

‘I’m left with a huge chest, which is causing me hell with neck and back pain.

Ms Coldrick, pictured before the increase, has also had anxiety because of her large breasts. She told MailOnline she was ‘fuming’ the NHS would not allow her a breast reduction to rid her of the physical and mental pain 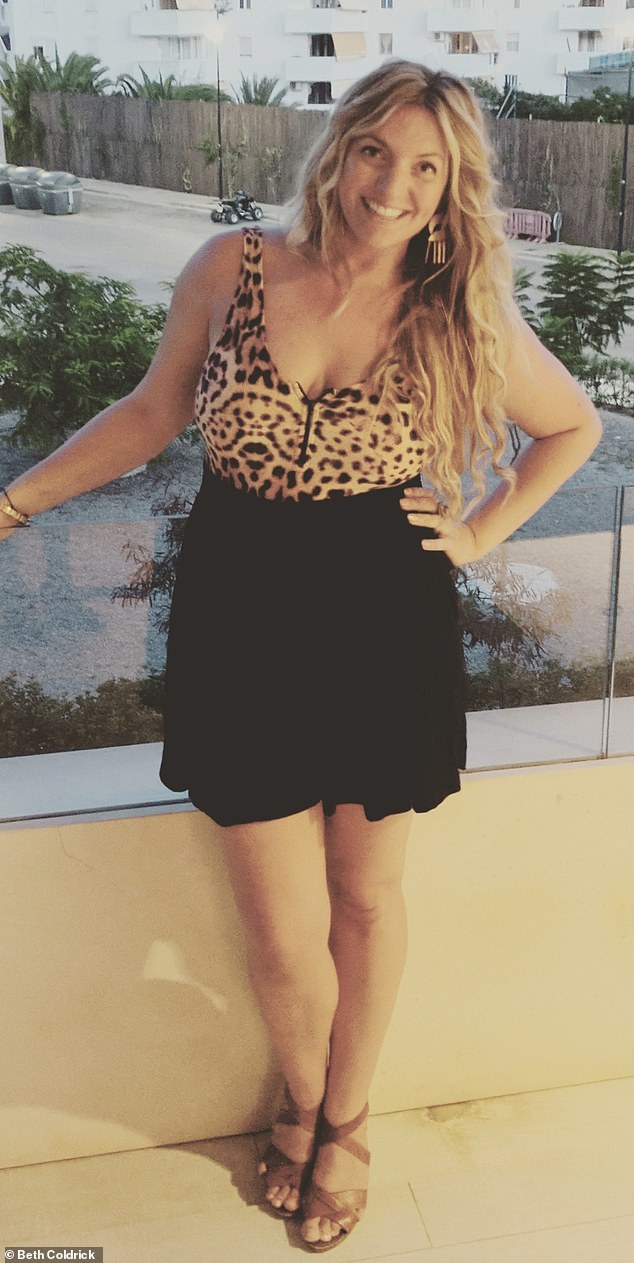 The 37-year-old is hoping to raise the £7,000 needed to fund her breast reduction surgery privately because of the NHS’s decision

‘My breasts are made of mainly breast tissue, so there’s no way they will reduce again without a reduction.

‘I am in agony every single day. It really gets me down. It’s affected my confidence.

‘I am crippled because I can’t do anything because of my breasts.’

Ms Coldrick had to buy new bras every eight months as her breasts grew. At a size of 40HH her breasts weigh around 3.3kg together.

She said all her doctors agreed it was ‘ridiculous’ the NHS had refused her a reduction. 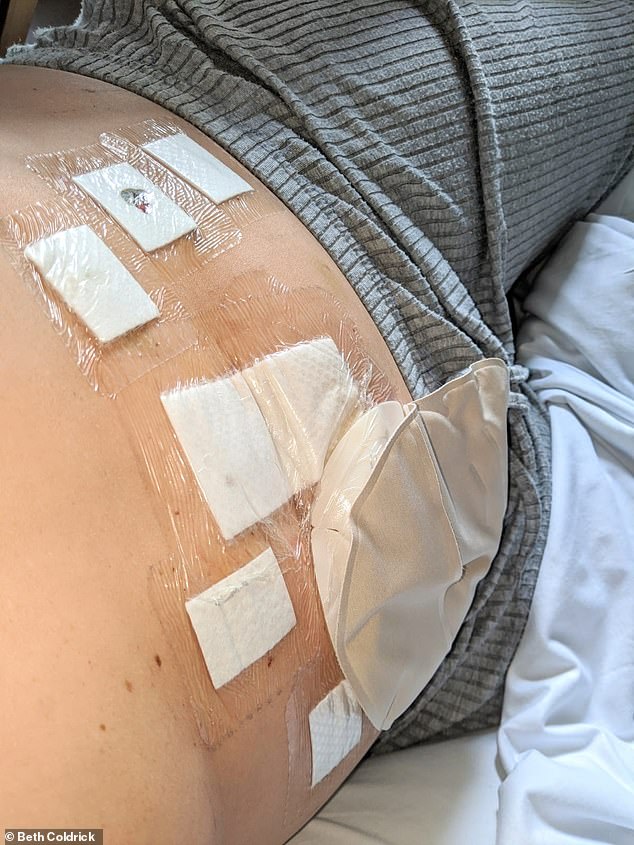 She had four life-changing operations, including a proctectomy that means she will have a permanent stoma 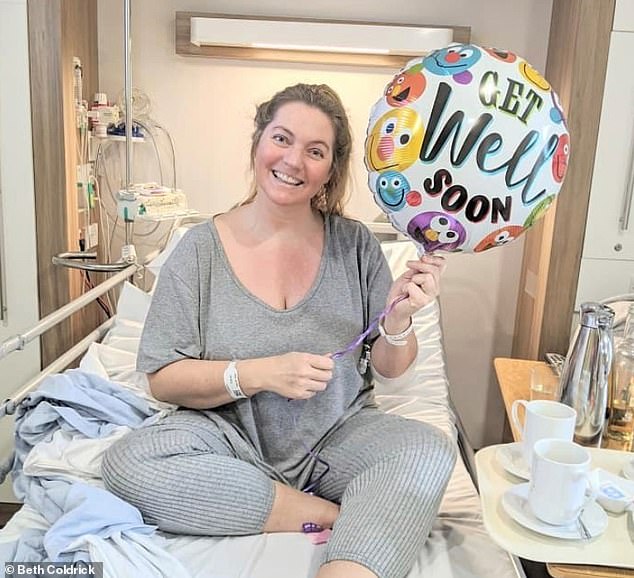 Although Ms Coldrick always tries to remain positive she said she was ‘struggling to see the light at the end of the tunnel’ after she was left with breasts weighing around 3.3kg

‘I need a breast reduction because this is really painful,’ she said.

‘I am fuming. It’s just not fair because I am suffering.

‘It doesn’t make sense. It really frustrates me.

‘I’m not bashing the NHS but they are so behind the times.’

She added: ‘My fourth and final surgery was a proctectomy meaning that my stoma is irreversible and I’ve had to completely change my whole lifestyle, how I eat and exercise and my career. 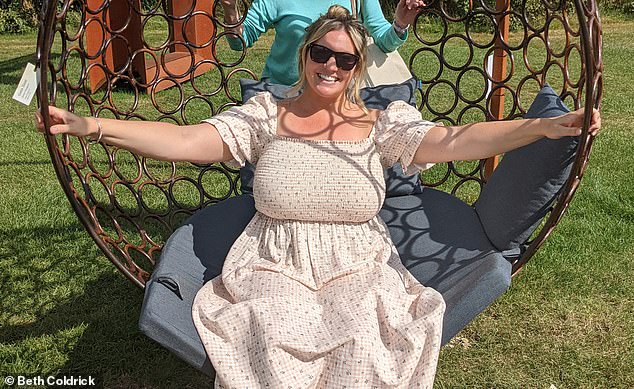 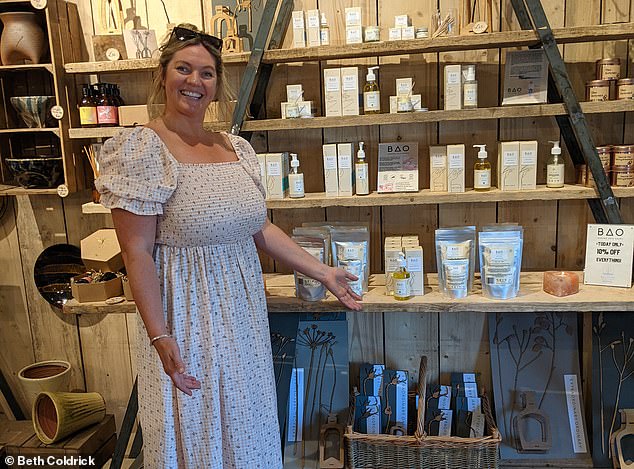 Ms Coldrick runs a skincare business in Dorset (pictured). She said her chronic disease, surgeries, periods of recovery, and ‘feeling medically ignored’ led to her being prescribed anti-depressants

‘The effect on me mentally, financially, and physically has been immense.

‘I am struggling to run my business which requires me to be on my feet all day, making organic skincare products.

‘The combination of the chronic disease, the numerous surgeries, periods of recovery, and now feeling medically ignored has led me to be prescribed anti-depressants, and I am really struggling to see the light at the end of the tunnel.’

The NHS have not replied to a request for comment from MailOnline.