A day of celebration quickly soured as a mass brawl erupted among punters as they poured out of a Sydney racing event at Rose Hill garden.

The ticketed Australian Turf Club Christmas offered attendees the chance to watch the races while getting into the festive spirit – with Santa photos, Christmas treats and seasonal songs.

But the merry mood was soon lost as embattled revellers threw their fists – and flowers – into the faces of other spectators. 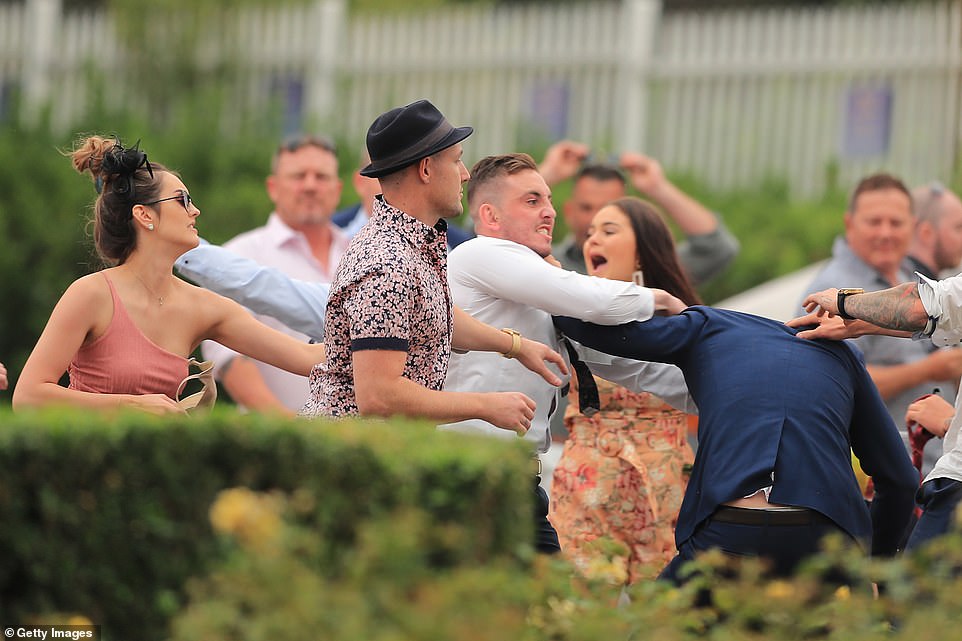 Women were seen trying to clam the situation, stepping in to desperately separate the men as they yanked each other 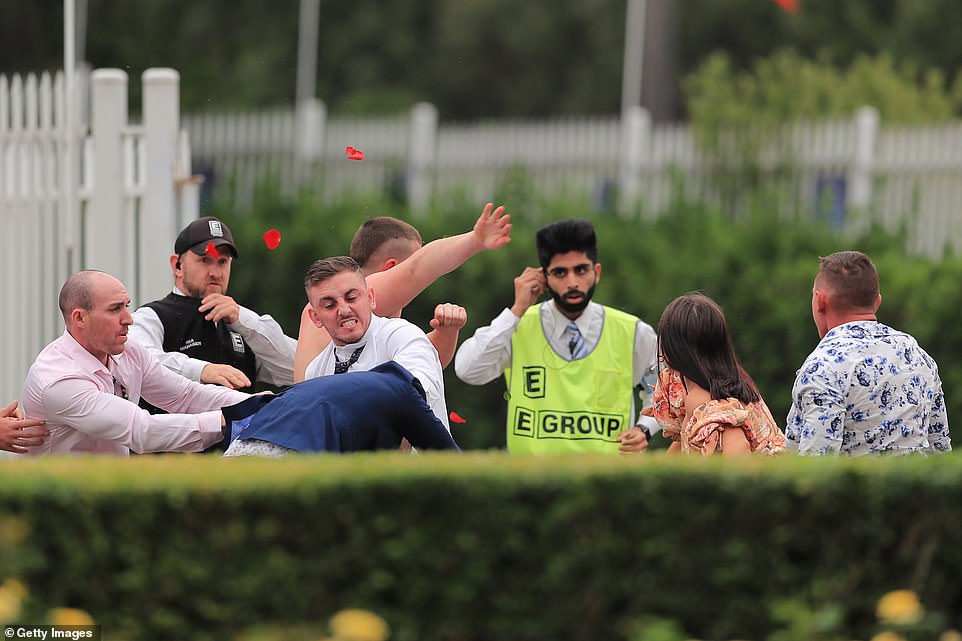 Limbs flailed as men yanked at one another, driving their fists into each other’s faces.

Some spectators attempted to stop the fight as security guards requested back up.

Women desperately tried to stop the mayhem, with one woman transforming her bouquet of flowers into weaponry by pelting it over one aggressor’s skull. 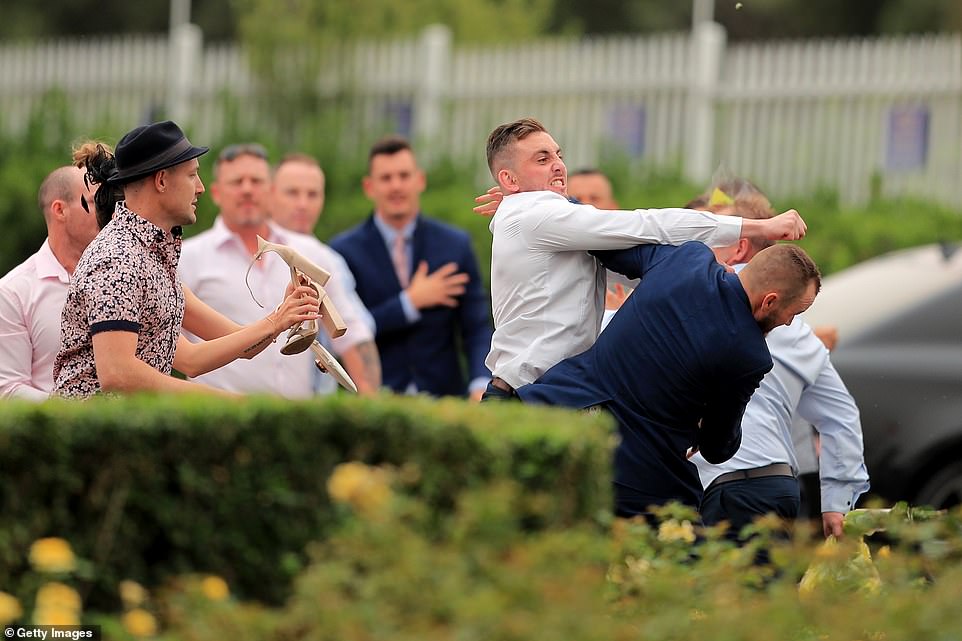 Onlookers rushed in, heels in hand, as the men torpedoed their fists into each other 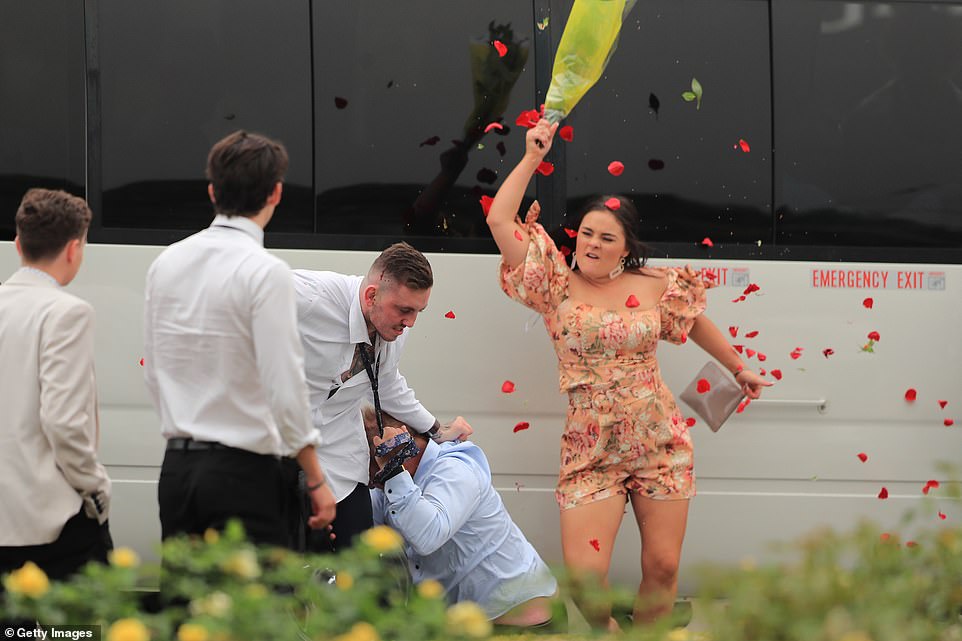 Blood appeared to trickle down one man’s head as he pinned a man in a blue shirt to the ground, a glamorous woman was covered in petals as she tossed her bouquet into the action 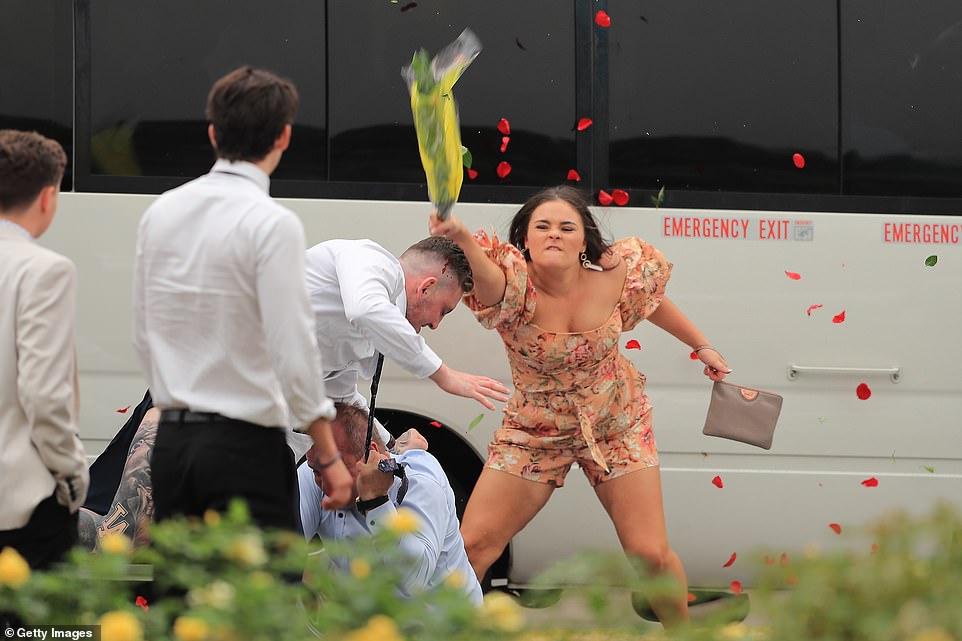 The batting did little to deter the man’s violent rage but instead sent a hail of petals flying back into her face.

Before the blood shed, jockey Kathy O’Hara took the trophy for race nine on top of Tory joy. 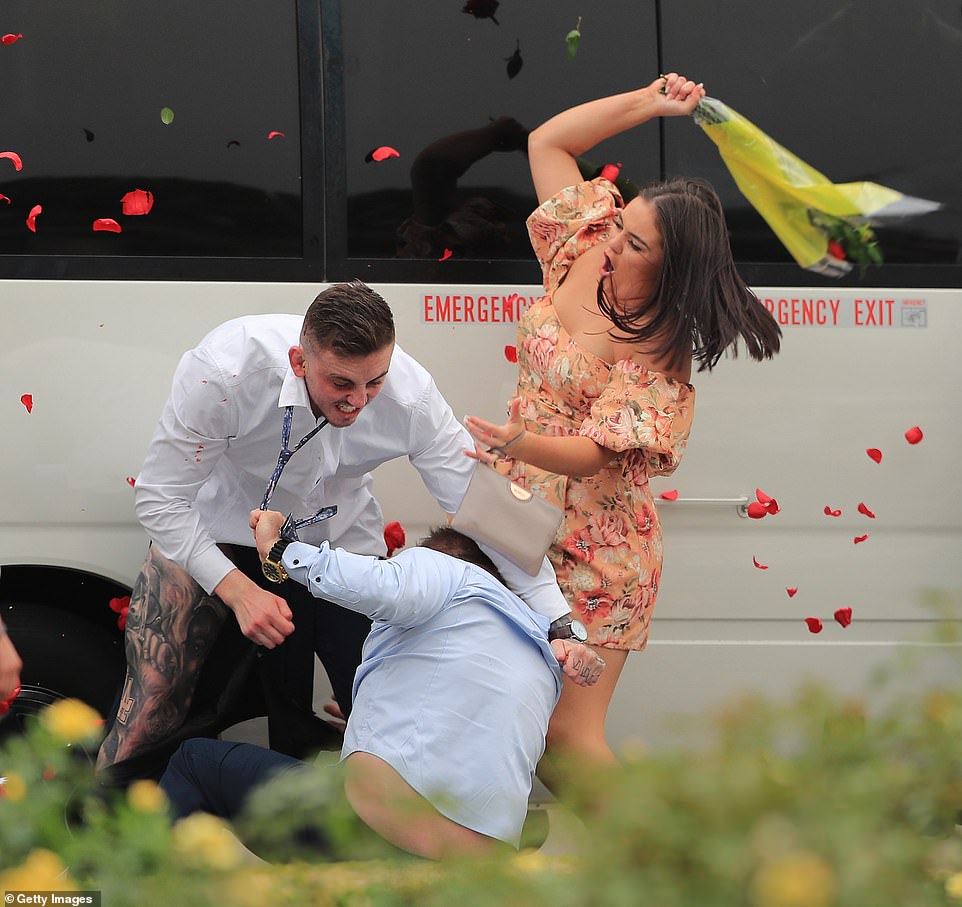 The man’s pants were torn during the brutal scuffle exposing his tattooed leg, as another man fell to the ground 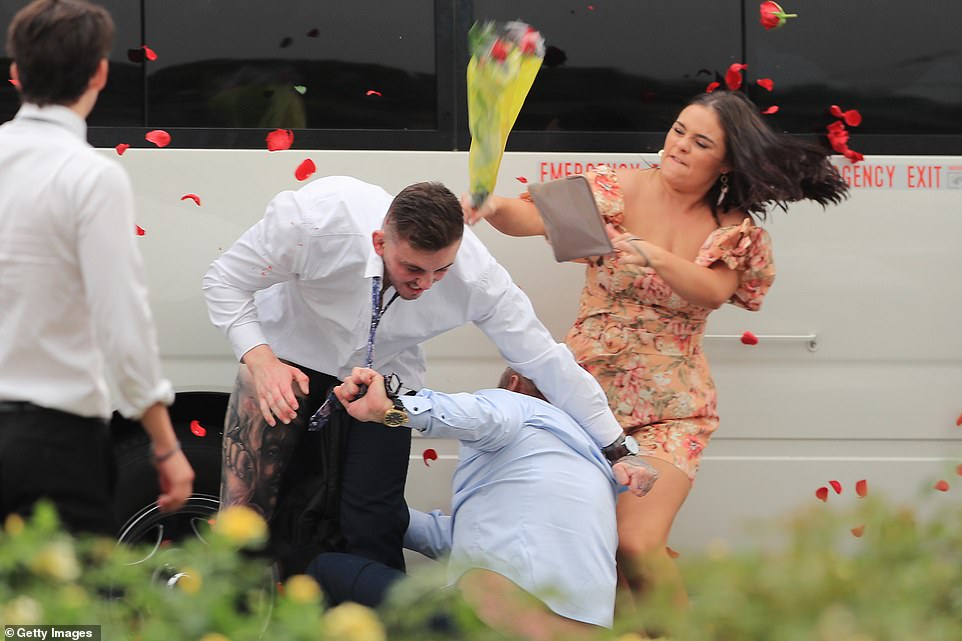 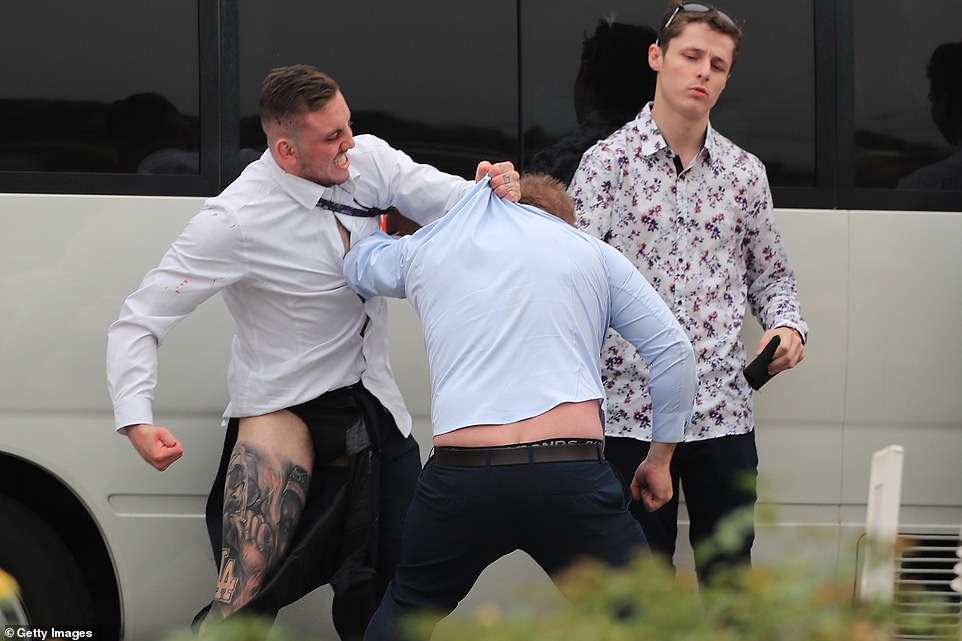 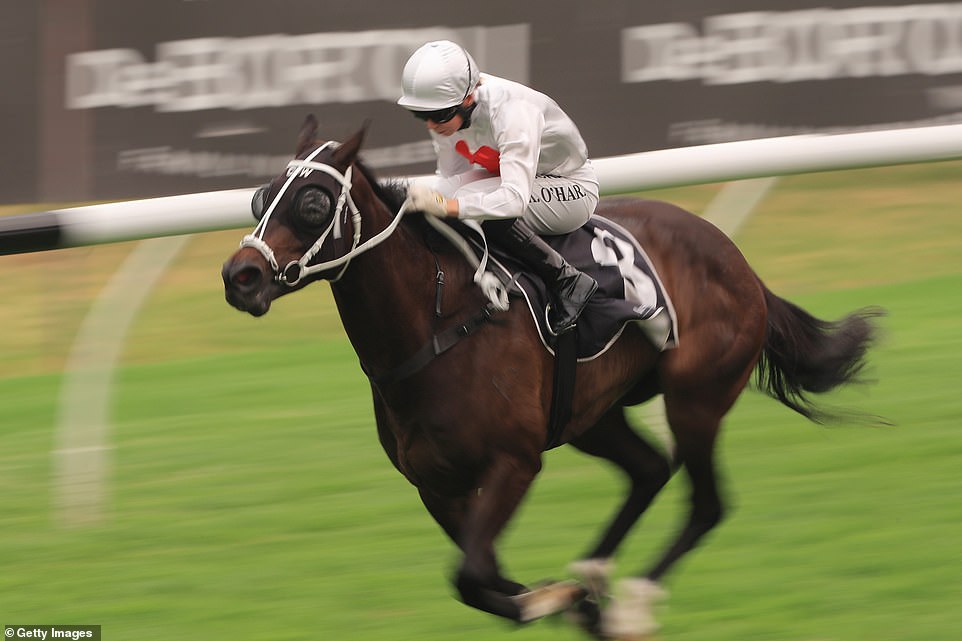 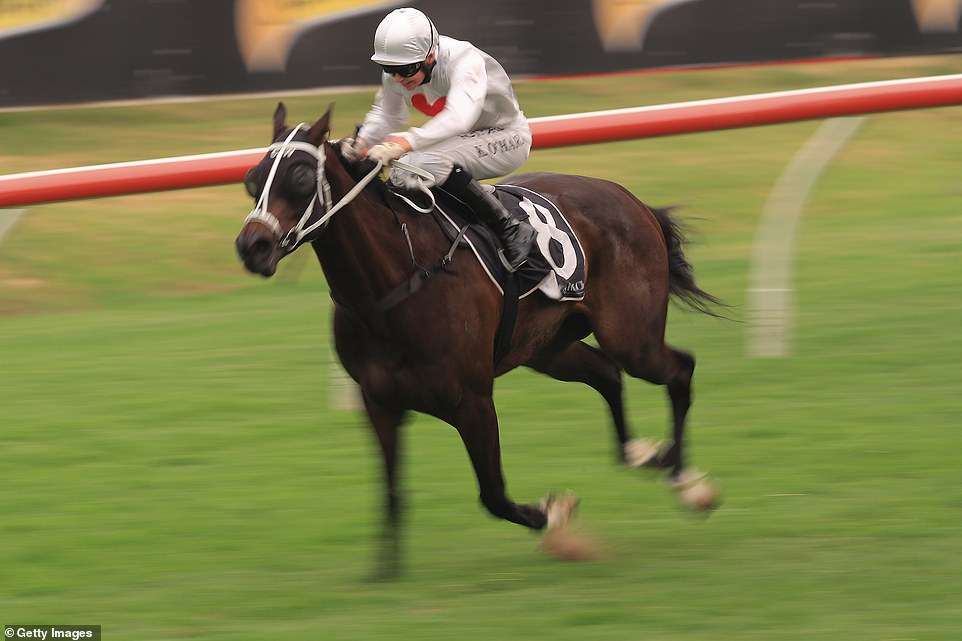 O’Hara galloped into victory as the Australian Turf Club Christmas racing day, which was advertised as an exciting day of thoroughbred racing with a host of Christmas entertainment across the racecourse