A 26-year-old woman who once weighed over 280 pounds has shed 100 pounds by following workouts on Instagram and incorporating intermittent fasting into her eating routine.

Tanique Johnson, originally from Jamaica and now living in New Jersey, set out on her weight loss journey in 2016 when she was 23-years-old. At the time, she was drinking a Slurpee from 7-Eleven every day, and her only exercise involved an ‘occasional’ walk.

Three years later, Tanique has revealed in an article for Women’s Health that she has managed to shed an impressive 100 pounds by following at-home workouts on Instagram, adapting a healthier diet and doing intermittent fasting.

Inspirational: Tanique Johnson, 26, as seen in 2015 (L) and more recently (R), originally from Jamaica but now living in New Jersey, set out on her weight loss journey in 2016 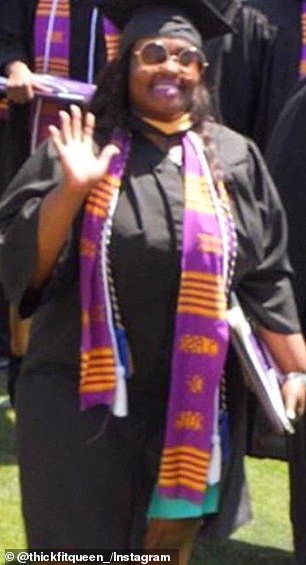 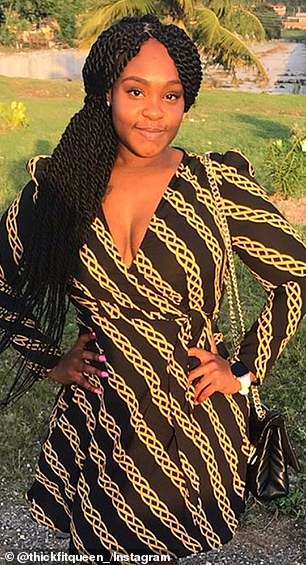 Incredible! Pictured in 2015 (L) and recently (R), Tanique knew she needed to lose weight when she visited her doctor for a knee problem and found out that she weighed 286 pounds in 2016

Wow! Tanique, as seen before her weight loss (L) and more recently (R), was drinking a 7-Eleven Slurpee every day at the time, and only going for an ‘occasional’ walk

In the article, Tanique admitted that she never considered herself ‘big’ when she was growing up.

However, she said she knew that her eating habits ‘weren’t great’. Despite her father regularly buying her healthy meals, Tanique said she would always opt for ‘junk food, bread, and cheese’. 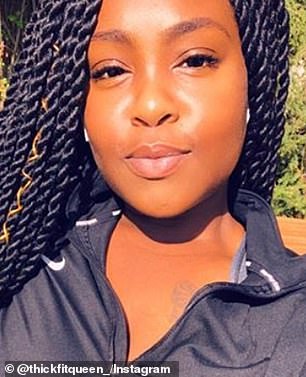 Ambitious: Determined to lose weight after she realized her weight was affecting her knee and causing it to ‘crack’ when she walked, Tanique began doing at-home workouts and improving her diet

She said: ‘Sometimes I’d even snack on condensed milk.’

However, her unhealthy diet soon took its toll on Tanique, as she said she began gaining weight.

She said: ‘Soon I started noticing my weight gain, little by little. I joined the track team for a year, but kept up my unhealthy eating; and in college, things really got out of control.’

It wasn’t until 2016 that Tanique reached a turning point, at which time she revealed she was drinking a 7-Eleven Slurpee – a frozen carbonated beverage – on a daily basis.

According to 7-Eleven, a small 12-ounce Coca Cola Slurpee contains 27 grams of sugar, and 100 calories.

The American Heart Association states that the maximum amount of added sugars a woman should consume per day is 25 grams.

Meanwhile, the only exercise she was getting in was an occasional walk every so often. She explained that during her walks she began to notice that her knees were making a ‘cracking’ sound as she walked.

Tanique explained: ‘When I consulted my doctor I was embarrassed to learn I weighed 286 pounds, and the weight gain was responsible for my creaky knees. 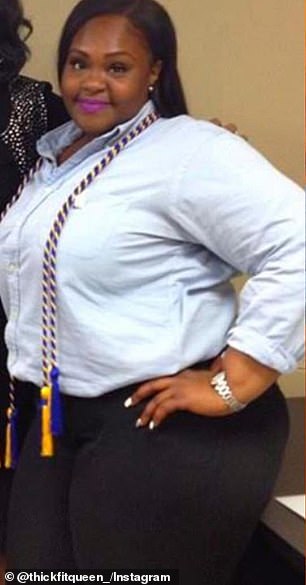 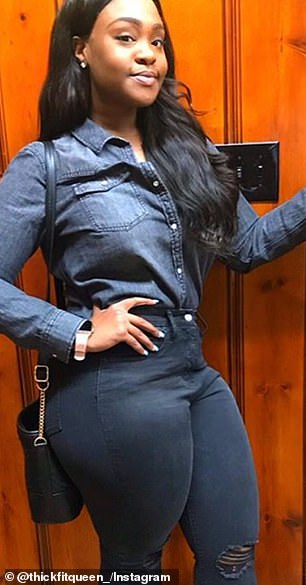 Impressive: As seen in 2015 (L) and recently (R), Tanique revealed that before adapting a healthier diet, she would eat junk food and would sometimes even ‘snack on condensed milk’ 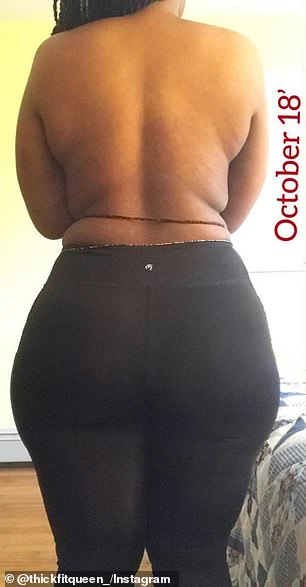 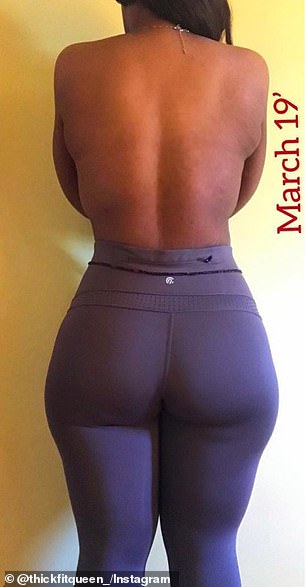 Results: However, when she became determined to lose weight, Tanique, as seen in October 2018 (L) and March 2019 (R) began eating more vegetables and other healthy foods 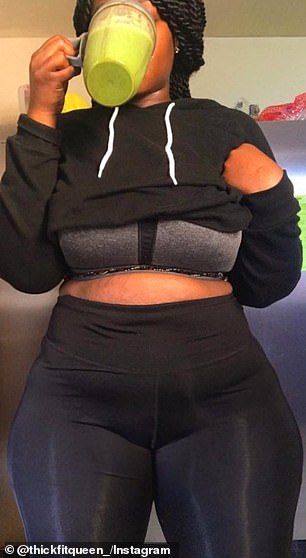 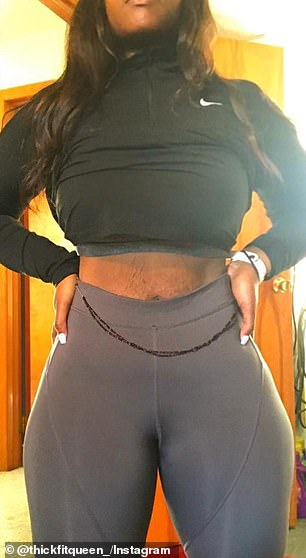 Fit! Tanique, as seen in summer 2018 (L) and more recently (R), set her goal weight to 160 pounds. She also allowed herself just one ‘cheat meal’ per week and focused on working out

Gorgeous: Tanique, pictured in September 2018 (L) and recently (R) began doing intermittent fasting – an eating pattern that cycles between periods of and eating

‘I didn’t want to find out where I’d be in another five years if I kept this up,’ she said.

Determined not to allow her weight gain to progress any further, Tanique began completing at-home workouts by following fitness tutorial videos on Instagram. 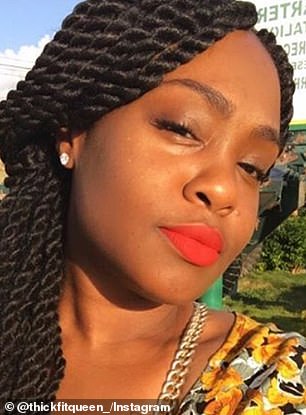 Journey: The 26-year-old also began logging her progress and sharing fitness routines on Instagram, where she now boasts over 80,000 followers

She explained: ‘I started working out at home by following Instagram videos posted by various trainers and eating more vegetables (and less junk food) – seriously, that’s it.

‘For the first time, I was sticking to a healthier lifestyle and stopped making excuses,’ she added.

Tanique first set out on her weight loss journey by making some changes to her lifestyle. She set her goal weight at 160 pounds, and decided that she would allow herself one ‘cheat meal’ per week.

She also ‘vowed’ to take her time learning a routine that would work for her body.

Determined to stick to her weight-loss plan, Tanique created an Instagram account where she began logging her progress.

The 26-year-old now boasts over 80,000 followers on the social media platform, where she posts videos of her at-home workout routines – which she puts together using different things she has learned online and on Instagram.

She said: ‘Each workout typically involves 45 minutes of cardio and 25 minutes of strength training (either upper body and core or lower body).

‘I also make sure to go to the gym to lift actual weights twice a week,’ she added.

Tanique also revealed that she began incorporating intermittent fasting – an eating pattern that cycles between periods of and eating – into her daily eating routine. 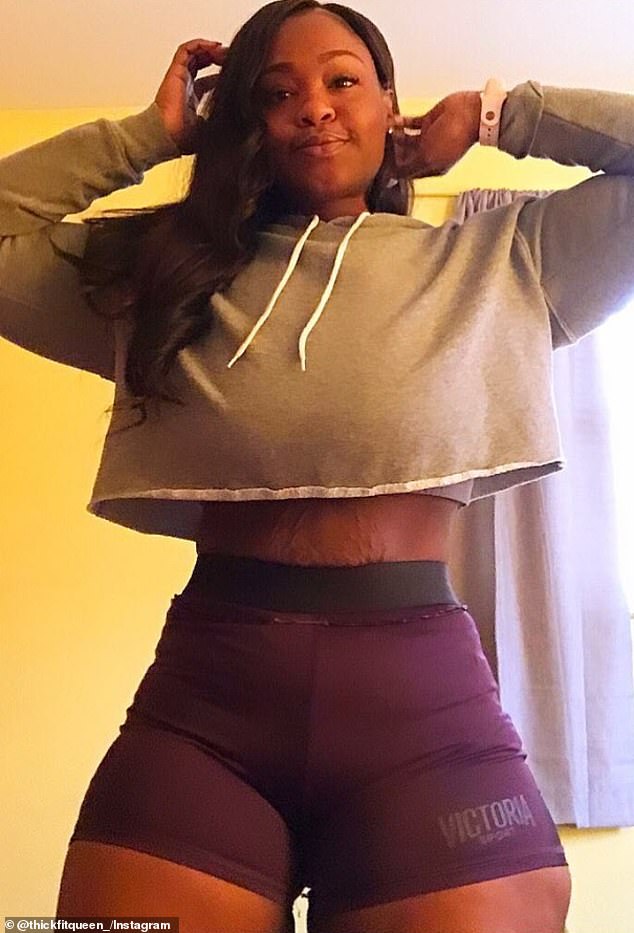 Happy: Delighted with her progress so far, Tanique, as seen recently, now weighs 185 pounds – just 15 pounds off her goal weight of 160 pounds

Confident: Pictured recently, Tanique said she is grateful for the support she has received from her family and friends. She added: ‘I feel more proud every day of what I’ve been able to do’

She said she typically fasts between 6pm and 12pm, during which time she usually drinks only black coffee and water with lemon.

To break her fasts, she says she eats vegetables, protein and ‘fewer carbs’.

Her typical breakfast or lunch is a spinach and cheese omelette with half an avocado, while her go-to snack would be a protein shake, fruit or some nuts.

Breakfast / Lunch – Spinach and cheese omelette with half an avocado

Snack – A protein shake, fruit, or some nuts

For dinner, Tanique usually opts for rotisserie chicken with steamed broccoli that she seasons with butter and garlic.

She credits intermittent fasting with helping to curb her ‘sweet tooth’, as she said she no longer eats dessert.

Tanique explained: ‘It’s allowed me to mindfully consider whether I want to eat just because I’m stressed or because I’m truly hungry.’

Happy with her progress so far, Tanique now weighs 185 pounds – just 15 pounds off her goal weight of 160 pounds.

Despite losing 100 pounds, Tanique said sticking to her routine isn’t always easy. She said: ‘While I have been successful in my weight-loss journey, I still have days when I get down on myself.

‘Luckily, I have family and friends who have supported me on this journey and have embraced my lifestyle change as much as I have.

She added: ‘Though I’m still working on the mental aspects including self-doubt that come with change (sometimes it’s easier to change your body than your mind), I feel more proud every day of what I’ve been able to do, and show others they can do, too.’