A woman who had two liver transplants and was told she’d never have children was shocked when she was admitted to the hospital with a liver infection and found out she was six weeks pregnant.

Hannah Rosenfelder, 29, from Broomfield, Colorado, was born with biliary atresia, a liver disease which causes the narrowing and blockage of bile ducts.

She had her first liver transplant at 15 years old and her second one at 25 years old.

Rosenfelder was always told it was unlikely she’d have children because her body couldn’t handle pregnancy.

However, in March 2017, she went to the hospital with a liver infection and discovered – after a routine pregnancy test – that she and her husband were expecting.

Doctors didn’t believe she would successfully carry the baby to term but, in October, Rosenfelder welcomed her daughter, Hadley, at 37 weeks. 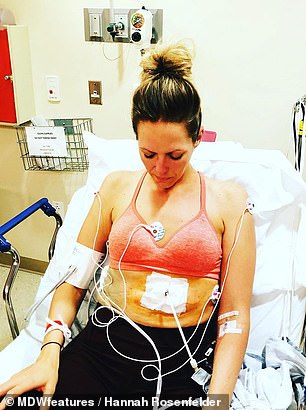 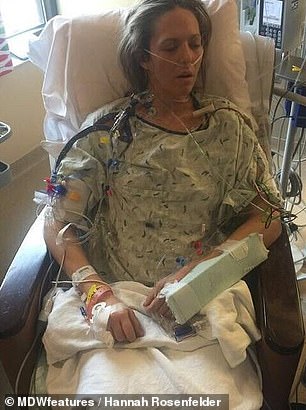 Biliary atresia is a liver disease in which the bile ducts to become blocked, causing the liver to scar. Rosenfelder (in the hospital, left and right) had her first liver transplant at 15 years old

Rosenfelder was diagnosed with biliary atresia when she was six weeks old after her mom took her to the doctor when she became jaundiced.

Biliary atresia is a rare disease that occurs when the bile ducts – which normally lets bile drain from the liver to the intestines for excretion – become blocked.

This means bile remains in the liver, where it damages liver cells and causes liver scarring, known as cirrhosis.

The first signs are jaundice – a yellowing of the skin due to the buildup of bile – which appears between two and six weeks old.

It occurs in about one in every 12,000 infants in the US, according to the National Institute of Diabetes and Digestive and Kidney Diseases.

The first treatment is called the Kasai procedure, which involves moving the bile ducts outside of the liver and replacing them with part of the small intestine.

Even if the procedure is successful, many children will slowly develop complications and need a liver transplant.

Rosenfelder said she missed a lot of school days because of her illness and, when she did attend school, she often had an IV in her hand – making her feel like she didn’t fit in.

‘I required my first transplant at 15, but the actual surgery didn’t really hit me until I got the call,’ she said.

‘I was excited that this could mean an end to my hospital stays and a fresh start to life that I wanted badly.’ 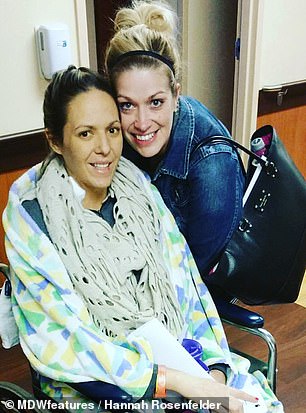 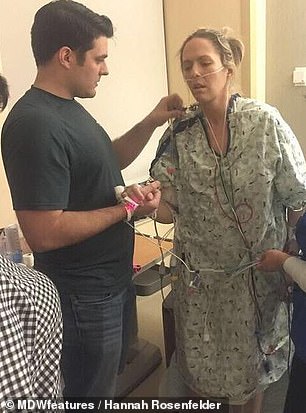 Rosenfelder’s bile ducts became blocked again and she was put on the transplant list once more at age 23. She had her second transplant at age 25. Pictured, left and right: Rosenfelder in the hospital for her second liver transplant 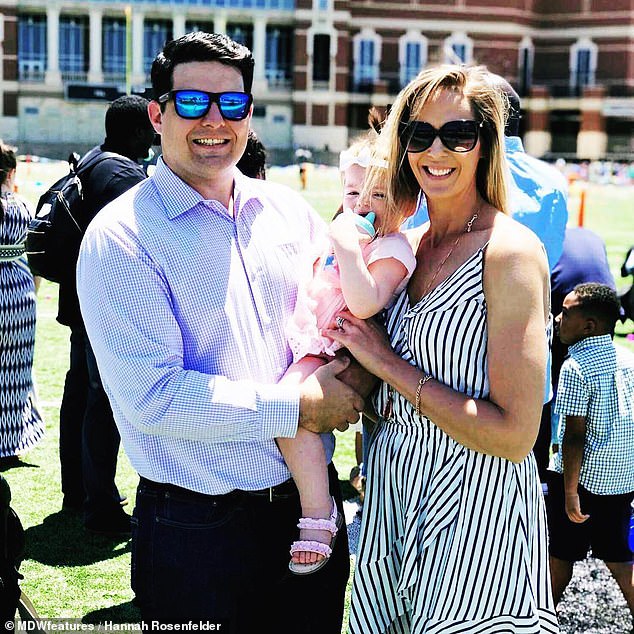 Doctors told Rosenfelder that it was unlikely she’d have children because her body could likely not handle a pregnancy. Pictured: Rosenfelder, right, with her husband, Ryan, and their daughter, Hadley

Rosenfelder said that after she received her new liver, she finally felt like she had energy.

But her health problems soon quickly caught up.

‘I had a lot of bile duct problems as they wouldn’t stay open to allow the bile to flow, so I was frequently sick,’ she said. ‘There came a point when I spent 280 days of 2015 in hospital.’

At age 23, Rosenfelder – now married to her husband, Ryan – was back on the transplant list.

‘The recovery was going to be a lot harder and I was so tired that I just wasn’t sure I could go through it all again mentally,’ she said.

‘In some ways I felt guilty for needing another organ, like I’d failed.’

Rosenfelder had always been told it was unlikely she’d have children but, after her second transplant at age 25, doctors told her that her body could likely not handle a pregnancy.

Being told she couldn’t have children was difficult for Rosenfelder, but seeing her friends become mothers made it even harder to accept.

‘When my friends started having babies while I was fighting to stay alive after my second transplant, I got really upset,’ she said. ‘I just wanted to feel like one of the girls.’

In March 2017, Rosenfelder began experiencing stomach pain and her eyes and skin began jaundicing. She recognized these as signs of a liver infection.

Staff at the hospital performed a routine pregnancy test, and gave Rosenfelder the shock of her life. 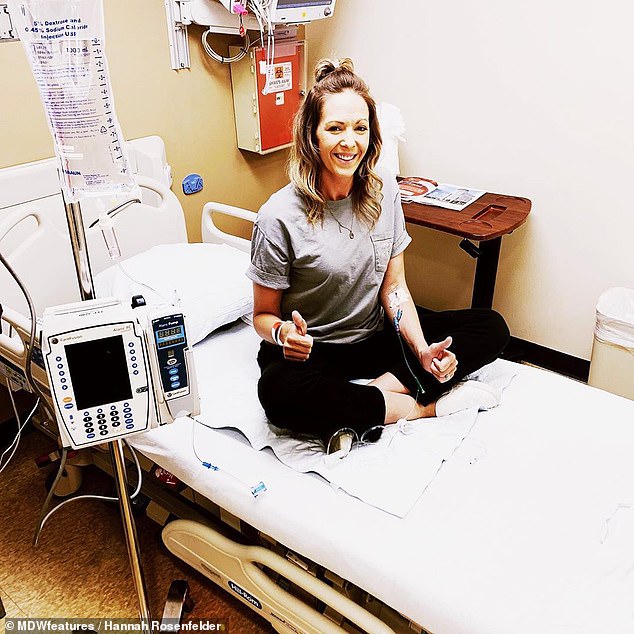 In March 2017, Rosenfelder went to the hospital after she began exhibiting symptoms of a liver infection. Pictured: Rosenfelder at a medical appointment, June 2019 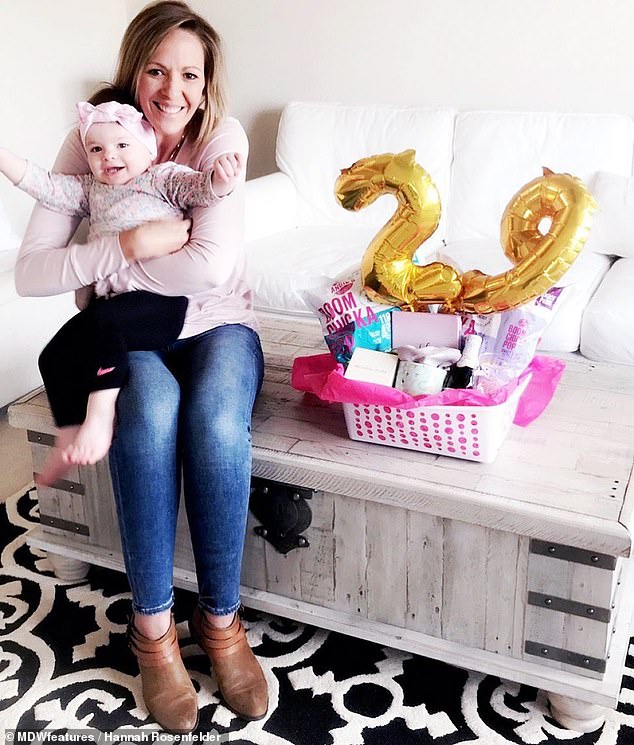 Doctors performed a routine pregnancy test and discovered that she was six weeks pregnant. Pictured: Rosenfelder with her daughter on her 29th birthday

‘The doctor came in and asked whether I was aware that I was pregnant,’ she said.

‘I was in shock and I asked him to repeat it for me three times before he finally asked me whether I understood what he was telling me.’

However, doctors told her and her husband not to get their hopes up because there was no guarantee she’d carry the baby to term.

‘I was told as a little girl I might never walk, that I’d be short and have speech problem, but these things never happened,’ Rosenfelder said.

‘I knew we were given this gift for a reason. I prayed the night we found out and I felt this peace that she was safe. I never worried about her or feared whether she was okay.

‘I knew that she had a special calling and she was safe in me.’

Rosenfelder said her pregnancy was relatively easy because she was already used to dealing with symptoms such as nausea and fatigue. 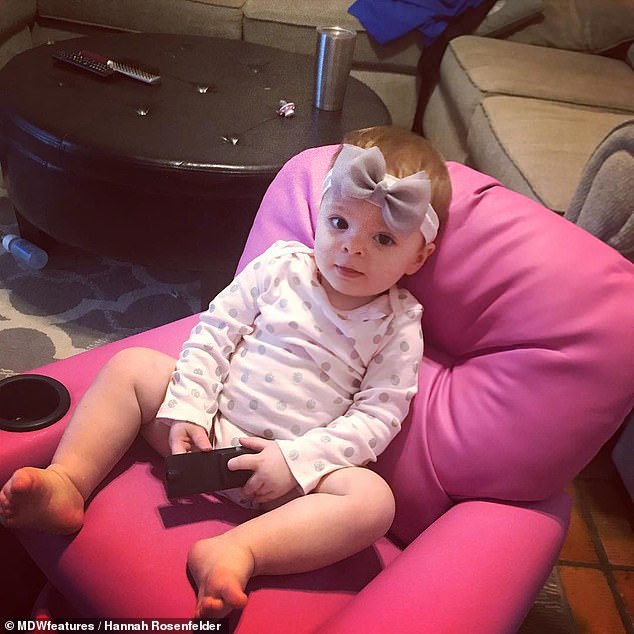 Rosenfelder said she was shocked, yet excited – but doctors told her that they didn’t know if she would be able to carry the baby to term. Pictured: Rosenfelder’s daughter, Hadley 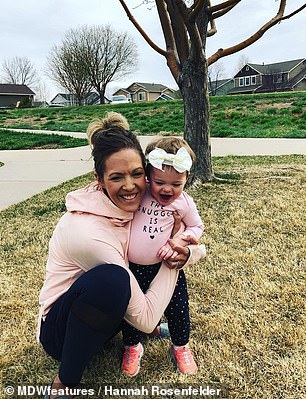 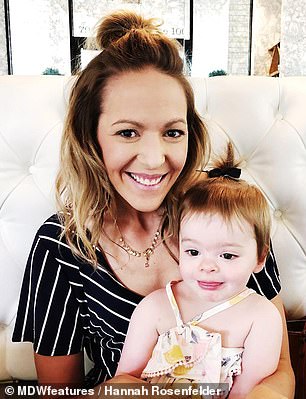 During her third trimester, Rosenfelder was in the hospital often with infections. At 37 weeks, she was induced and gave birth to a healthy baby girl. Pictured, left and right: Rosenfelder with her daughter, Hadley

But during the third trimester, because Rosenfelder’s body was working so hard, she ended up in the hospital every few weeks with an infection.

She had to be induced at 37 weeks – in October 2017 – because her medical team wasn’t sure her body could handle any more stress.

‘The moment I held her, it was like everything stopped. I couldn’t believe I was holding this precious baby that everyone else said was impossible,’ Rosenfelder said.

‘I felt so much gratitude to my donor families because if it wasn’t for them, I would never have had her. Hadley has given me another reason to keep fighting for my health.’