A Chinese woman was shocked to be informed doctors had removed 468 stones from her gallbladder in a single operation.

Doctors said the 58-year-old woman’s gallbladder had almost doubled its size after being filled with hundreds of stones, with some measuring 0.4 inches in width.

The patient said she loves eating oily, deep-fried food, and doctors claimed her eating habits could be the cause of her condition. 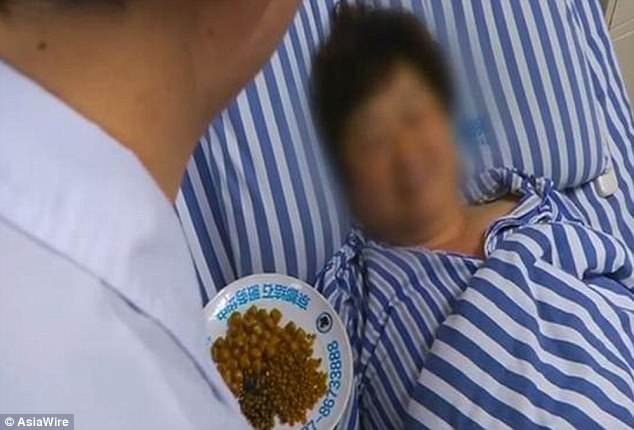 Shen Zhangyi, the head surgeon of the department of gastroenterology, found Ms Chen’s gallbladder had been filled with stones after an ultrasound scan.

‘It had swelled to almost doubled its size. A normal sized gallbladder is about a size of a fist,’ Mr Shen explained.

Ms Chen told the reporter that she was first told she had gallstones 17 years ago, but she left the condition untreated.

Instead, she said she started to do regular exercises, such as hiking and swimming.

However, she loves eating deep-fried food.

‘I wouldn’t miss any deep-fried dishes on the table,’ she said. 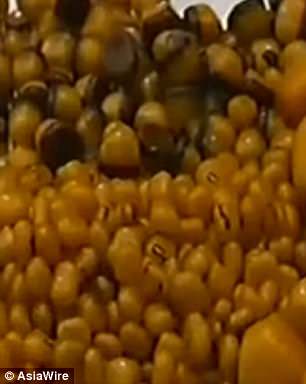 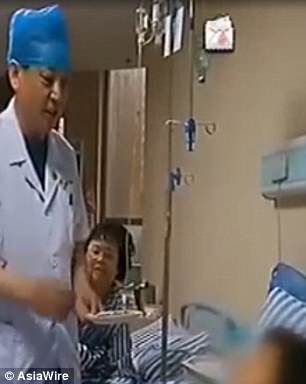 The stones (left), some as wide as 0.4 inches, had expanded Ms Chen’s gallbladder to twice its size. Her surgeon told her that her diet could be related to the cause of the gallstones (right)

Gallstones are usually made of cholesterol and form in the gallbladder.

They typically do not cause symptoms but can lead to intense abdominal pain if they block a bile duct.

Around one in 10 adults in the UK have gallstones but may not be aware of it.

If people suffer inflammation of the gallbladder as a complication, they may experience pain, fever or jaundice.

Gallstones are caused by an imbalance of bile in the gallbladder.

Risk is higher if you are female, overweight and older than 40.

Mr Shen said if patients leave their gallstones untreated, they could suffer from malfunction of the bile and jaundice, when ones skin and the white part of the eye turn yellowish or greenish.

A spokesman for the British Society of Gastroenterology previously commented that the link between specific diets and gallstones had very limited evidence as the causes are known to be varied.

But prevalence in China and other parts of Asia is much higher in comparison to the UK because of higher rates of infection in the bile duct.