American R&B star Chris Brown was released without charge after being held for questioning overnight in Paris after a woman accused him of rape.

Brown and two other people, thought to be his bodyguard and a family friend, were released on Tuesday evening in Paris after a woman accused him of a ‘brutal and violent assault’ at a hotel.

The Grammy award-winning singer was detained Monday on potential charges of aggravated rape and drug infractions.

The Paris prosecutor’s office said the investigation is ongoing, while the singer’s lawyer Raphael Chiche said his client ‘energetically’ proclaimed his innocence.

Earlier today a model said she was allegedly raped by three men including American rapper Chris Brown during a drug-fuelled party that turned ‘violent and brutal’ in his five star hotel in Paris.

The horrifying ordeal is said to have happened at the Mandarin Oriental in the centre of the French capital, where suites can cost more than £19,000-a-night.

It was allegedly in the exclusive hotel that the 24-year-old woman, who cannot be named for legal reasons, says she was attacked by Brown, his bodyguard and a family friend.

On Tuesday night, all, including 29-year-old Brown, remained in custody at a Paris police station facing the threat of criminal charges that could see them imprisoned.

In a post on Instagram rapper Brown appears to deny the accusation saying it is ‘false’, ‘disrespectful’ and ‘against my character and morals.’

In an interview with French Closer magazine, the woman said she met Brown ‘through a friend’ who works at the Crystal Lounge nightclub on the Champs Elysee.

‘This friend asked me what I was doing the next day, and if I would like to meet Chris Brown,’ said the woman, who finally met the rapper on January 15.

‘I said yes and the next day, on Tuesday, I had an appointment at 11.30pm at the Mandarin Oriental hotel to meet the rapper. At the reception of the hotel, I found myself with friends of his and other girls. We went up to his suite to pick him up and we all went to a nightclub called ‘The Quay’. 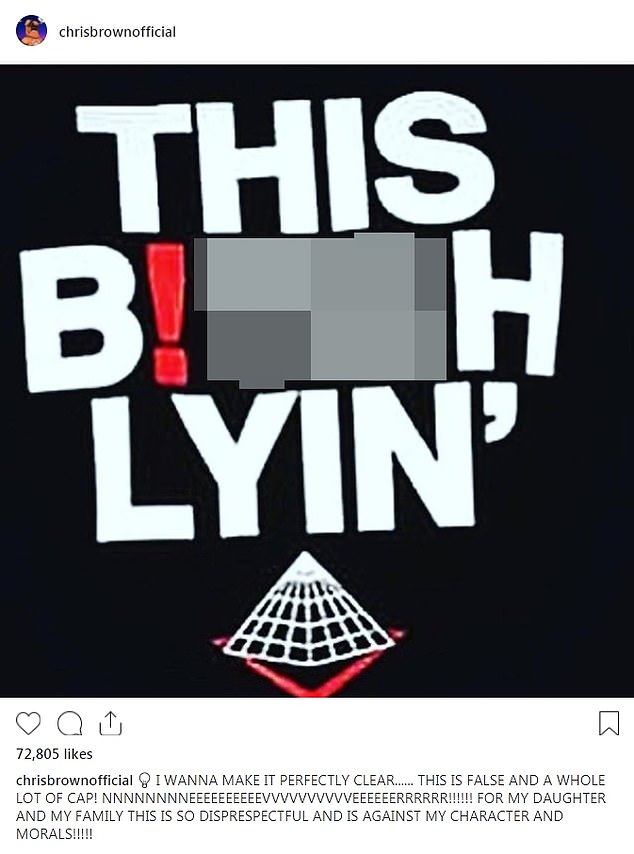 In a post on Instagram rapper Brown appears to deny the accusation saying it is ‘false’, ‘disrespectful’ and ‘against my character and morals’

‘Everything was going well. Around 4am, they decided to go back to the hotel. I wanted to go home, but someone in Chris Brown’s entourage took me by the arm and said: ‘Come on, we’ll have a good evening.’

‘Leaving the nightclub, there were two Mercedes vans that were full up. So I said, ‘There’s no place, I’m going home.’ Then I was told, ‘No, come on!’. And I was put in Chris Brown’s car with another girl.’

The group got back to Brown’s rooms at the Mandarin Oriental.

The woman told Closer: ‘Before entering the suite, the bodyguard took all our cell phones. It didn’t seem surprising given the artist’s notoriety and I didn’t worry. Once in the suite, we were offered drinks. There was cocaine and cannabis.

‘There were about fifteen girls, friends of Chris Brown. The music was loud, people were coming in and out … It was a bit chaotic.’

Asked if prostitutes were present, the woman said: ‘I don’t know. There were only very pretty girls.’ 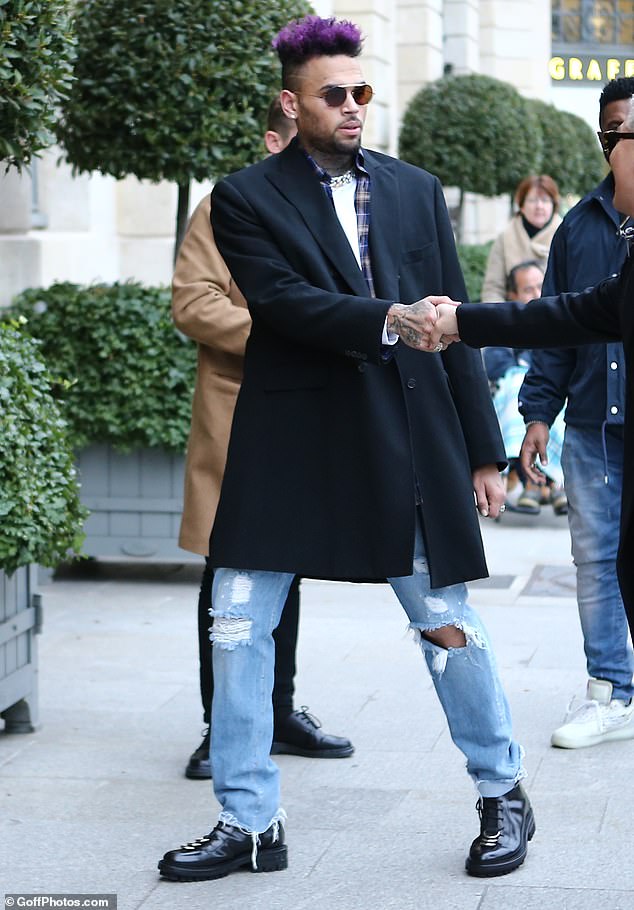 Singer Chris Brown is pictured in Paris on January 16, the morning after he allegedly raped a 25-year-old woman at a hotel. He is seen meeting people unconnected to the alleged attack. Police sources said he had been arrested yesterday

She continued: ‘At one point, I went to the bathroom. Chris Brown followed me and took me by the right arm. He made me enter a sort of dressing room. He closed the door.’

Saying the rape followed, the woman explained: ‘It lasted 25 to 30 minutes. It’s still too difficult for me to explain in detail what he did, but it was brutal and violent.

‘He was threatening and aggressive. I was very afraid. Once it was over, he opened the door. I told him that I wanted to pick up my cell phone and go home.

‘Chris Brown went to see one of his friends. I thought this person was going to accompany me to the bodyguard for my cell phone, but that’s not what he did.

‘He took me to his room, he locked the door and he abused me too. It was the same with the bodyguard All I wanted to do was go home. I was too scared. There were three muscular men, aggressive and menacing. I couldn’t do anything. I’m traumatized, I can’t overcome what happened to me and resume my habits. It’s horrible, I’m lost.’

Asked by Closer how she managed to escape, the woman said: ‘I said that I had to go to bed, that I had classes the next day. I cried. When he saw me like that, he returned my cell phone and I left.’ 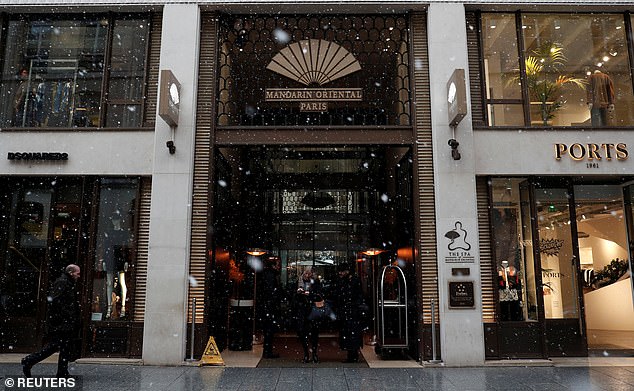 Following the attack in the early hours of January 16, the woman waiting two days, until Friday January 18 to go to the police in Paris.

Confirming she had been hesitant, the woman said: ‘Yes. I was scared. They have my address, my cell number, my picture …

‘But I didn’t want them to be able to do the same thing to other girls. Chris Brown is the kind of person who thinks himself powerful and thinks himself above the law, but no. I’ll go to the end. Abused three times in the same evening by three different men – it’s unbearable to live with.’

The woman said she did not know if other women claim to have been raped that night.

‘I don’t know,’ she said. ‘Sometimes girls do not dare to speak. They are scared and I understand them, but I want them to stop doing this to girls who have not asked for anything.

‘I just thought I was having a good night with a star. I didn’t imagine that I was going to find myself locked up with aggressive and menacing men who forced me to do things I did not want to do.’ 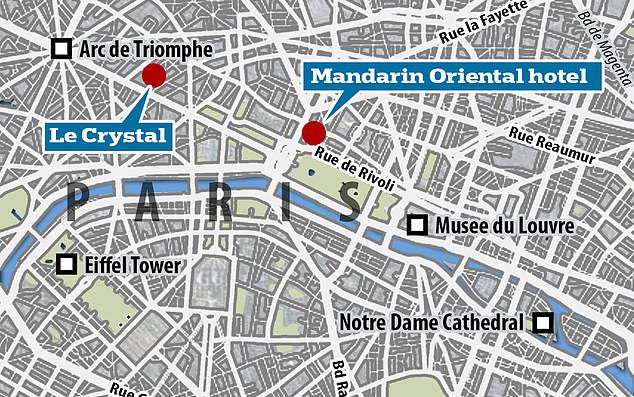 The three men, including Brown, were finally arrested at the hotel on Monday, and face charged of ‘aggravated rape’ and ‘violation of drugs legislation’, including using a ‘banned drug’.

The initially custody period can last 48 hours, after which an official investigation can be launched, or they can be freed.

Referring to Brown, a prosecuting source in Paris said: ‘He is accused of a rape and is being held at the judicial police offices in the 1starrondissement.

‘He was arrested with two others on Monday, and interviews and other enquiries are ongoing. All three men can be held for a period of up to 48 hours.’

In 2009, Brown was charged with domestic violence in the United States against superstar singer Rihanna, his then girlfriend. He admitted the offences, and was sentenced to community service.

Model Liziane Gutierrez also claimed she was punched in the face by the father-of-one, but this never led to court action.

Suites at the Mandarin, one of the most expensive ‘palace’ class hotels in Paris, can cost upwards of £19,000 a night.

2009: Brown pleads guilty to assaulting his then-girlfriend Rihanna on the eve of the Grammys.

He is sentenced to five years’ probation, a domestic violence programme and 180 days of community labour.

2012: The musician is involved in a nightclub brawl with Drake in New York. The case is later settled.

2013: He is handed another 1,000 hours of community labour after a traffic accident in Los Angeles.

Later that year he is arrested for punching a man who tried to take a picture with him outside a Washington luxury hotel.

He is also accused of throwing a brick at his mother’s car.

2014: Brown is arrested and jailed after he is thrown out of rehab. He also admits violating his probation over the assault in Washington.

2016: Model Liziane Gutierrez claims Brown hit her and took her mobile phone in a Las Vegas hotel room. No charges are brought.

Later the same year he is arrested after a stand-off outside his Los Angeles home, following claims he pointed a gun at a woman.

2017: The rapper is ordered to stay away from ex-girlfriend Karrueche Tran after he allegedly punched her and threatened to kill her.

2018: Brown is arrested on a battery charge immediately after a performance in Florida.

He is also charged after sharing a picture of a three-year-old daughter with a monkey. Wildlife agents seized the animal and said he had no permit.

2019: He is arrested in Paris and accused of raping a woman.

A source close to the case claimed yesterday that ‘a number of the suspects were carrying cocaine, which police found at the hotel after responding to a complaint.’

The woman has accused Brown of raping her after they met at Le Crystal nightclub.

She is then said to have returned to the Mandarin Oriental hotel with other women and a total of three men.

The alleged victim claimed Brown had attacked her when they were left alone together.

The woman has also accused Brown’s bodyguard and another friend of the singer of assaulting her.

‘[Brown] is accused of a rape and is being held at the judicial police offices in the 1st arrondissement,’ said a prosecuting source.

‘He was arrested with two others on Monday, and interviews and other enquiries are ongoing. The offence is said to have taken place on the night of January 15 this year.’

The singer’s bodyguard is one of the two other men detained, according to police officials.

‘The woman said she was abused by Mr Brown, a bodyguard, and a friend, and then she was left alone with the star,’ said another source in Paris.

‘A total of three men were arrested at Mr Brown’s hotel. They did not resist police, and now have lawyers representing them.’

Brown was arrested on Monday and is still in custody today while police investigate the claims, they said.

Investigators have another two days to decide whether to let him go or file preliminary charges.

Brown’s publicists at Sony Music would not immediately comment.

The musician has been seen in the French capital in recent days attending events in the city’s fashion week. 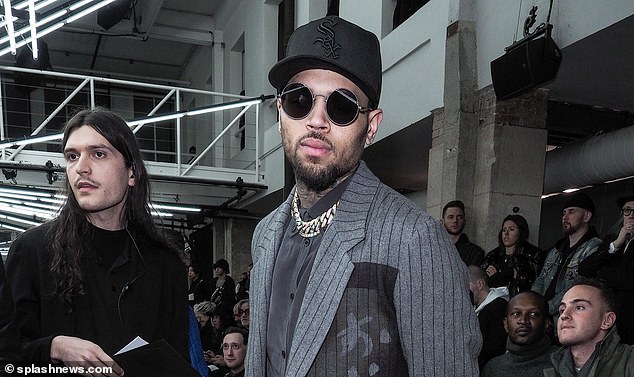 On Saturday night he was seen with his model girlfriend Ammika Harris at Paris nightclub Cirque Bonheur.

He has been in repeated legal trouble since pleading guilty to the felony assault in 2009 of his then-girlfriend, Rihanna, in the U.S.

He completed his probation in that case in 2015 but has been beset by a series of further legal issues including further accusations of assault.

Le Crystal, also known as the Crystal Lounge, describes itself as a ‘VIP clubbing experience bang in the middle of Paris’.

Brown was discovered by a record label when he was a boy working at his father’s gas station in Virginia.

First identified as a rapper, Brown has since found success with his rich singing voice.

He is best-known for hits in the 2000s such as ‘Run It’ and ‘Kiss Kiss.’ He retains a loyal fandom, including nearly 50 million followers on Instagram.

The outside of the Crystal Lounge in Paris, where Chris Brown is said to have met his alleged victim, is pictured today after the singer was arrested 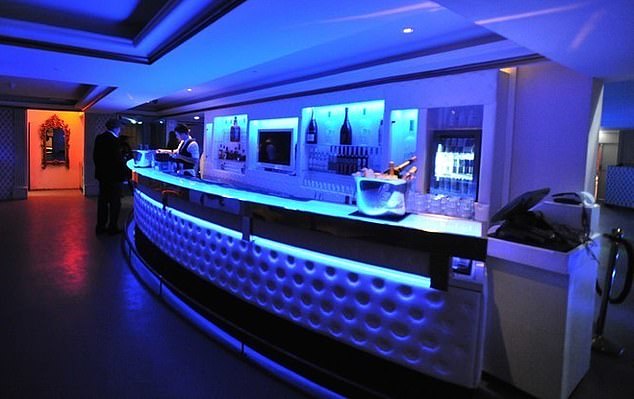 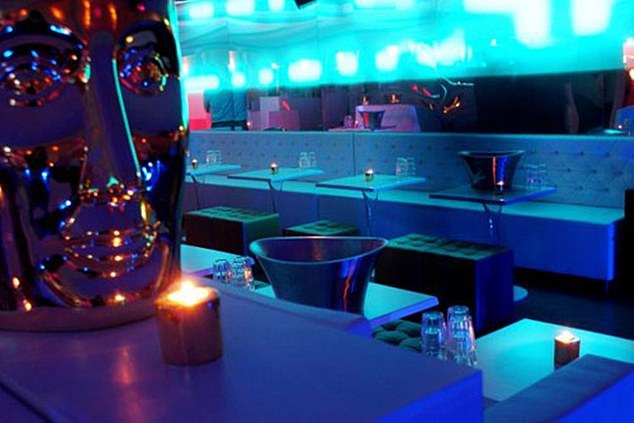 The nightclub where Brown is alleged to have met the woman. The singer and two others were arrested on Monday