Madelyn Frederick was always known as the ‘clumsy’ member of her family.

She thought it was nothing more than a lack of balance that left her constantly stumbles and unable to ride a bike.

But at 13 years old, after she was rushed to the hospital in her hometown of Dallas, Texas, with a higher than normal heart rate, further tests determined that she wasn’t clumsy at all.

In fact, doctors told her she was actually suffering from a rare genetic disease called Friedreich’s Ataxia, which gradually causes the loss of sensation in arms and legs and can impair speech over time.

Frederick has gone from being able to walk with minor balance issues to needing to use a walker around the house and a wheelchair when she goes out.

The 20-year-old was worried that her condition would deny her of fulfilling her dream of becoming a teacher.

But Frederick has used her pupils’ curiosity about her wheelchair as a teaching opportunity to raise awareness for FA among the next generation. 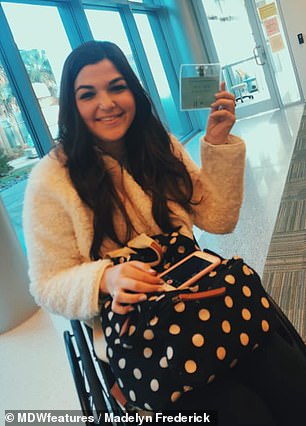 Madelyn Frederick, 20 (left and right), from Dallas, Texas, was always known as the ‘clumsy’ member of her family. She constantly stumbled and was unable to ride a bicycle 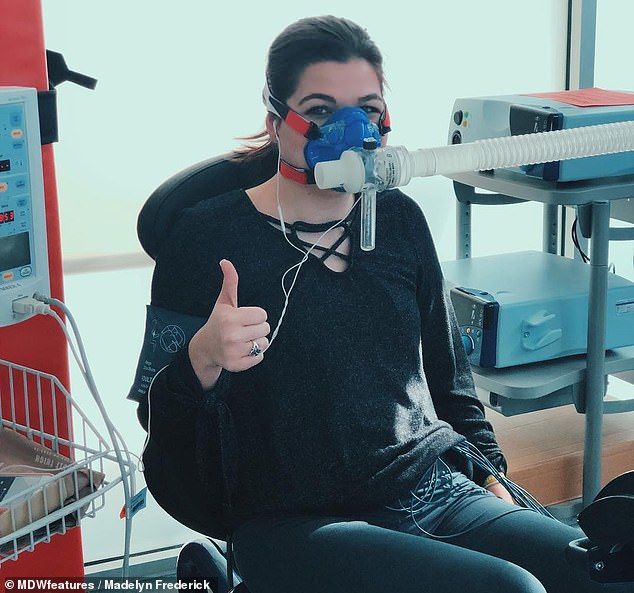 In December 2012, at age 13, Frederick was rushed to the hospital after running a mile when her pulse rate reached 234 beats per minute (bpm), higher than the maximum of 200 bpm. Pictured: Frederick doing a test to measure her oxygen levels while exerting energy

‘I would stumble down the stairs a few times a week and I was never any good at riding a bike, but my parents didn’t think anything of it,’ Frederick said.

She began getting chest pains during physical education classes in middle school and, at first, she was diagnosed with exercise-induced bronchospasms.

This occurs when the muscles along the walls of the airway constrict, which reduces airflow and makes it difficult to breathe.

But in December 2012, at age 13, Frederick was rushed to the hospital with a pulse rate of 234 beats per minute.

At this age, the average maximum heart rate should be no higher than 200 beats per minute, according to the American Heart Association.

It led doctors to investigate Frederick’s condition further and, in March 2013, she was diagnosed with Friedreich’s Ataxia (FA).

FA is a rare genetic disease that affects the nervous system and causes a progressive loss of movement.

Peripheral nerves, which carry signals between the brain and the body, degenerate overtime as do nerve fibers in the spinal cord.

There is no cure so treatment focuses on providing sufferers with wheelchairs, walking aids or prostheses so they can retain independence. 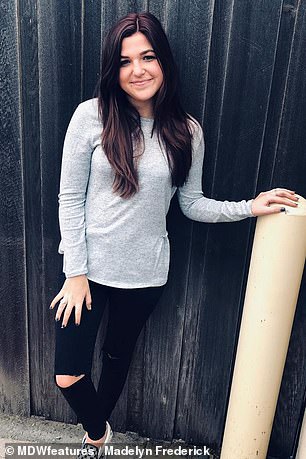 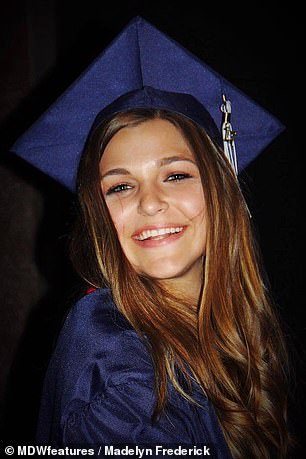 Three months later, in March 2013, Frederick (left and right) was diagnosed with Friedreich’s Ataxia. FA is a rare genetic disease that affects the nervous system and causes a progressive loss of movement 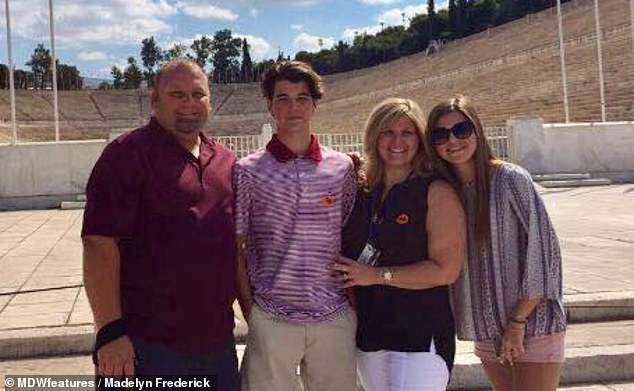 Frederick uses a walker within her house and she uses a wheelchair when she goes outside. Pictured: Frederick, far right, with her family in Greece

‘I had rapidly declined prior to my diagnosis,’ Frederick said.

‘I was sleeping through the day and I was in severe pain due to muscle spasms and neuropathy. So, I didn’t know how much worse it could get.’

Since her diagnosis six years ago, Frederick say that some days are harder than others and that her loss of movement has progressed.

‘My walking…was barely noticeable back then, but now it’s obvious when I walk,’ she said.

‘I used to hold on to someone’s arm lightly for stability, but now it’s more like I’m tugging and almost knocking them down.’

Fredrick uses walls and furniture to help her get around her bedroom and a walker within her house.

When she goes outside, she uses a wheelchair ‘mainly to conserve energy and reduce anxiety’, she says.

‘Occasionally I don’t use it,’ Frederick said. ‘For example, if I’m going to eat with friends or going to church because I can walk in and sit down, and I just hold someone’s arm to walk in.’ 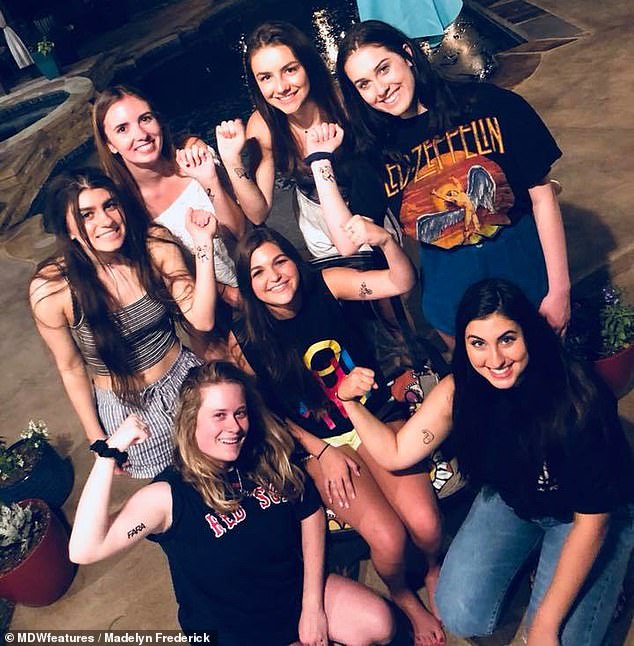 Frederick said she still hopes to accomplish her dream of becoming a teacher. Pictured: Frederick (center) with her friends 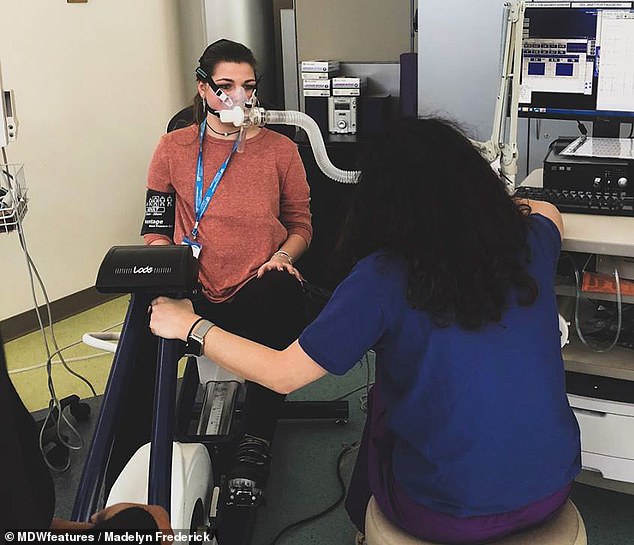 She says she uses her pupils’ curiosity about her wheelchair as a teaching opportunity to raise awareness for FA amongst the next generation. Pictured: Frederick doing a test to measure her oxygen levels while exerting energy

Frederick has had to learn to adapt to her limitations, but she hasn’t lost hope that she will accomplish her dream of becoming a teacher.

‘At the school I teach in, the children are very curious about my condition and about the wheelchair,’ she said.

‘Honesty is the best policy, so I hide nothing. I do have to simplify my description of FA, but I love seeing the innocence and immediate acceptance of children. It’s like they immediately see past the difference.’

Frederick says that she’s been able to do many things she thought were impossible post-diagnosis; such as traveling to Italy and Greece, learning to drive and walking across the stage to receive her diploma during her high school graduation.

Now, she says she wants to inspire others living with FA that life doesn’t have to revolve around their condition.

‘There’s so much I would like to show through my journey but most of all it’s that life is what you make of it, no matter what your circumstance,’ she said.

‘Choosing positivity will get you so much further than negativity. A happy, successful, fulfilled life is possible despite my challenges.’