Woman who tried 23andMe on a whim finds three siblings

Jaclyn Baxter was looking for her family medical history, and maybe some ancestral trivia, when she sent a sample of her saliva to 23andMe. When she got her results back, she found two half brothers and a half sister.

She was an only child until she decided to do the genetic test at age 33.

Finding her siblings led Baxter to discover that her beloved father was not biologically related to her, but she says that ‘changes nothing between me and him.’

Jaclyn Baxter (center) found two half brothers, Loren (right) and Tim (left) when she sent in a saliva sample to 23andMe for genetic testing. The three had their first ‘sibling reunion’ in July 2017

Baxter grew up in a two-parent household. She is a self-described ‘daddy’s girl,’ through and through.

Her relationship with her mother was a source of pain, so when she was 18 and her father, Gary Ralph, passed away, Baxter fled home, leaving the blood family she’d known behind.

Twenty-three years later, her children’s pediatricians were asking Baxter questions about her medical history that her own parents had never answered. She didn’t know what kinds of health problems she might have inherited from her father.

The service gives its customers a profile of more than 80 genetic traits that determine everything from the most trivial traits – like the ability to smell asparagus- to the most momentous, like a predisposition for Alzheimer’s.

On its purchase page, 23andMe says that ordering its ‘Health+Ancestry’ package, for $199, is ‘recommended’.

The combination package is ‘certainly the most popular,’ among 23andMe’s 2 million customers, according to Andy Kill in the company’s media relations department.

Baxter was one of those rare cases. 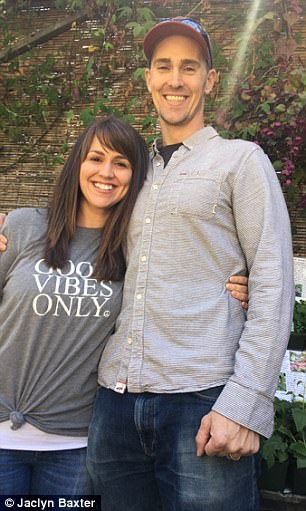 Baxter (left) found her half brother, Loren Chase (right), through 23andMe’s relative-matching service and met him for the first time in June 2017

She bought the combination package from 23andMe’s website, because it was ‘the most popular, basic option,’ and she had no idea what her heritage was. She didn’t even pay attention to the relatives section.

Baxter found out that she has very healthy genes, she is British, Irish, German, French, has more than a thousand relatives, and is 18 percent genetically matched to a half brother named Loren Chase.

Facebook turned up three men with that name. As soon as she clicked on his profile picture, Baxter knew in her gut which one was her brother.

23andMe gives customers an option to request to contact their relatives. Baxter wrote to Chase, who lives in Santa Rosa, California, through her results, asking if he was comfortable communicating with her.

He soon replied, ‘Jaclyn, Wow! Yes, I am definitely open to connecting. I have so many questions!’ according to her blog.

Baxter and Chase found out that they shared many traits beyond the genetic ones that 23andMe revealed, some of them downright uncanny.

The half-siblings were both born on March 5, though four years apart; they are both married, with two children, they have the same brown eyes, both hitchhiked through Africa, and both have another half brother, Tim.

Chase knew his whole life half of his genes came from a sperm donor. Seven years ago, he contacted an agency that helps the children of donors connect with their siblings, and found Tim McNulty of Irvine California.

Upon discovering one another, a long email chain ensued between the three siblings, and Baxter says they all connected instantly.

‘We were understanding of each other, and the security and comfort was already here because we had so much in common and got along so well,’ she says.

Some of the commonalities between Baxter and her brothers are easy to explain, like hair or eye color. 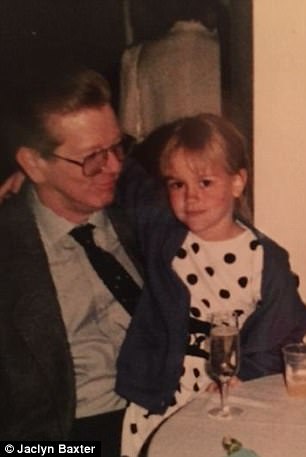 Baxter (right) sits on the lap of her beloved father, Gary Ralph, around age five. Ralph died when Baxter was 18, before she knew he was not her biological father

But, Baxter says McNulty’s ‘deep personality traits are very similar’ to her own.

The explanation for these more nuanced similarities probably has a lot to do with ‘nurture,’ but there are some surprising genetic correlations too.

Last year, scientists at the University of California, San Diego analyzed data from 23andMe (as well as from the Genetics of Personality Consortium)to identify the genes linked to ‘the big five’ personality traits: extraversion, neuroticism, agreeableness, conscientiousness, and openness to experience.

Baxter shares a ‘deeply adventurous spirit’ and exact travel destinations with Chase, and she and McNulty ‘process things in the same way and our emotions are so much alike, the way that we both worry, and are open,’ she says.

But the siblings share important ‘nurture’ or environmental factors too.

Both of her brothers’ mothers were artificially inseminated, using donor sperm, apparently from Baxter’s father.

Baxter, Chase and McNulty all sent their DNA to a lab which confirmed that they were all siblings.

Baxter was overjoyed. She couldn’t wait to meet them and search their faces for signs of the father they shared and whom she missed so much.

But she knew that something wasn’t quite adding up. 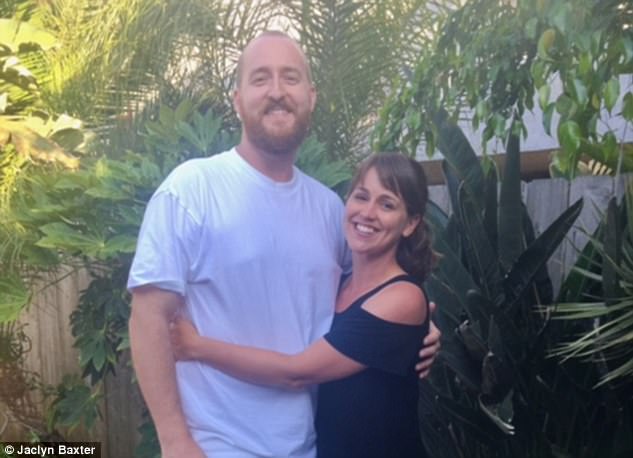 Baxter (right) met her half brother, Tim McNulty, for the first time in July 2017. She says that the two share ‘deep personality traits’ in common, in addition to their genes

Finding her father: How one mail-order test revealed her dad was NOT biological

A cousin on her father’s side, Kelly, knew nothing about him fathering any other children or donating sperm, and Baxter just couldn’t imagine that her father, ‘the best man’ she’d known wouldn’t have had a relationship with her brothers if he’d known about them.

Then Kelly made an off-hand comment that rewrote part of Baxter’s story.

Kelly’s daughter had taken the 23andMe ‘Health+Ancestry’ test too. But she didn’t even make Baxter’s top 2,000 ‘relative’ matches.

She had father’s sister send her DNA into the specialist too.

Baxter and her father’s sister were a zero percent genetic match. They weren’t even distantly related. According to genetics, two strangers were Baxter’s brothers and the aunt she’d known her whole life wasn’t even related to her.

And the man that raised her, her ‘one and only,’ was not her biological father.

Baxter reeled from the shock, but took the news in stride.

‘My dad is still my dad, and now I have three siblings, and family,’ she says.

Baxter grew up with a loving father, but has long been estranged from her mother.

Both of her brothers, and her newfound sister grew up with two parents, like she did, but had poor relationships with their fathers, and have long lost touch with the men who raised them. 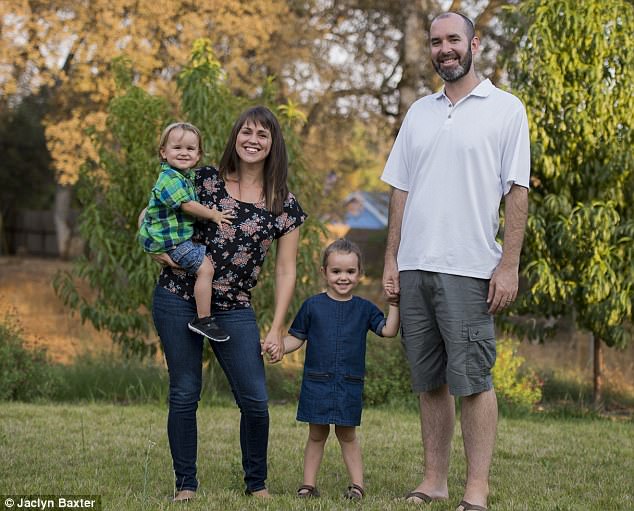 Baxter and her husband, Colin (right) wanted to know what genetic predispositions her children, four-year-old Zoey (center) and one-year old Jack (left) had inherited from her, so she sent a DNA sample to 23andMe. Her family grew even larger when she got her results and found out she had three half-siblings

Sadly, ‘this is really common in the donor-conceived world,’ Baxter says.

Research on the families with donor-conceived children has yielded very mixed and inconsistent results. But some studies suggest that fathers have a more difficult time bonding with children of artificial insemination – not, therefore, biologically related to them – than do mothers of children conceived with a donor egg.

Baxter stresses that she does not resent her parents for not telling her that she was donor-conceived. She and her siblings have only enjoyed discovering a bigger family than they knew existed.

‘It was lonely being an only child, with both my parents being gone out of my life, and my brothers and I share a bond in common that most can’t relate to.’

Baxter met Chase for the first time in June, then McNulty in July, and the three had their ‘first sibling reunion’ shortly thereafter.

Together, the three decided to submit their DNA to Ancestry.com, which has a database of 4 million users. ‘I’m going to be surprised if we don’t find more relatives,’ Baxter says.

In fact, she already found another sibling, a 35-year-old half-sister named Andrea Hugel Knosp, who lives in Ft. Polk, Louisiana.

Baxter spoke to her sister for the first time last week. 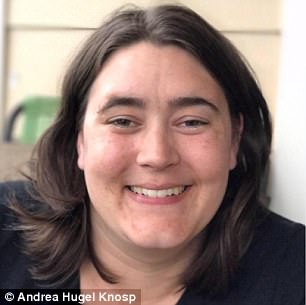 Baxter and her brothers wondered if they might have even more siblings they’d never met. They found a sister 35-year-old Andrea Hugel Knosp, through MyHeritage.com. Baxter and Chase both spoke to her for the first time last week, and Hugel Knosp plans to come from Louisiana to California to meet her three half siblings in November

‘Conversation flowed so easily [and] we had no problem sharing anything and everything with each other,’ said Baxter. Hugel Knosp had apparently spent hours on the phone with McNulty just the night before.

‘She told me that she felt an instant connection to us,’ Baxter says of her sister, who will fly out to California to meet her siblings for the first time in November.

Baxter and her brothers are contemplating whether or not they want to take their genetic exploration a step further, and try to find their sperm donor.

She worked out that since she and her brothers are four years apart in age, their donor would have been donating sperm for at least four years, between 1979 and 1983. All they really know about their donor is that, according to Chase, he went to University of California Berkeley.

If Baxter and her siblings try to find their donor father, ‘there are a million possible outcomes,’ she says.

‘Sometimes I feel safest just trying to stay in a place where he’s a great guy, and our siblings are so alike and are great, good, kind people, so that’s what he must be like.’

But there’s always the possibility that her donor father would be nothing like the father that raised her.

‘Either way it could be sad,’ Baxter says. ‘If he’s a bad guy, or if he’s a great guy, I’d feel really guilty,’ not wanting to feel any betrayal of her father. 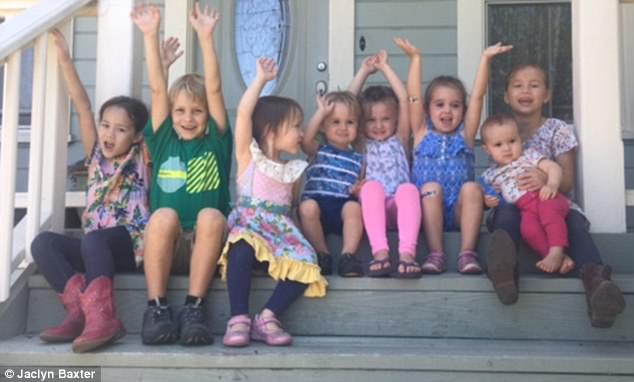 As it happens, Baxter has been working with a family with adopted children for 10 years. In a role-reversal, she’s found herself asking the 16-year-old, Emma, ‘what is it like to not know your birth parents?’

Baxter’s husband, Colin, and children Zoey (four) and Jack (one) have been happy to see their family grow. ‘The children haven’t questioned it, they’re just super excited to have more aunts and uncles,’ she says.

Whether or not she finds her donor father, Baxter says she has no regrets and would take the 23andMe test and find out all she has about her father and siblings again in a heartbeat.

‘I’m living the nature and the nurture,’ she says, ‘and both are beautiful.’