Larissa Bell, 21, of East Kilbride (pictured arriving at Camberwell Magistrates Court today) was filmed dancing on top of an ambulance car near London Bridge station on July 7 as revellers watched on cheering

A Scottish waitress who twerked on top of a smashed-up ambulance after England beat Sweden in the World Cup quarter final will stand trial for criminal damage.

Larissa Bell, 21, of East Kilbride, was filmed dancing on top of the ambulance car near London Bridge station on July 7 as revellers watched on cheering.

England had just defeated Sweden 2-0 to go through to the semi finals and Scott Dennett, 25, James Elton, 27, and Kangyue Jian, 26, were in the crowd.

The two Englishmen and the Singaporean are accused of cracking the rapid response car’s windscreen and making major dents in the bonnet before Ms Bell climbed on top.

All four appeared at Camberwell Magistrates Court today accused of causing the £6,867.42 in damage, which left the vehicle out of service for 34 days.

Bell and Dennett did not indicate pleas during the 15-minute hearing, while Elton and Jian both admitted their crimes.

Dami Eniola, prosecuting, said: ‘England had won the match that day and, as a result, thousands of people gathered outside to watch the match and support England.

‘After the match the crowd started moving to Borough Market on to Southwark Street.’

She said during the celebrations police asked the driver of the ambulance car to park it in the road. 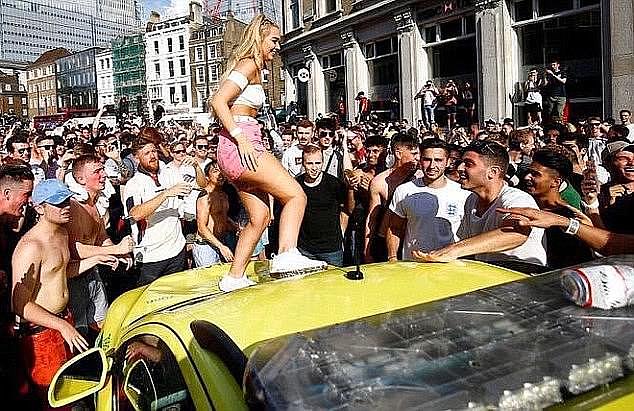 Pictured: Ms Bell, 21, is seen on top of an ambulance car outside London Bridge station on July 7 as World Cup revellers cheer her on

Miss Eniola said: ‘She looked around the area and she saw a member of the public stumble in front and he had a head wound and she went to provide him with medical assistance.

‘During that time the final whistle went for the game. Members of the public surrounded the vehicle.’

She added: ‘There were individuals jumping on top of it, this caused damage to the wing mirror of the ambulance.

‘The bonnet was dented, the windshield was smashed, essentially it was dented.

‘In total seven people were caught by social media footage to be seen on the vehicle on the car and the bonnet.’ 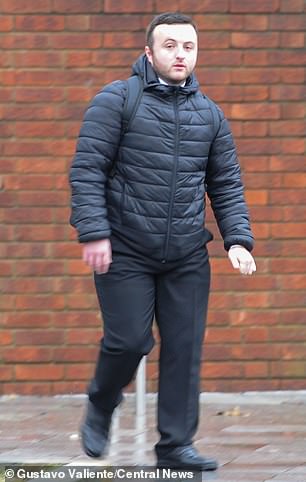 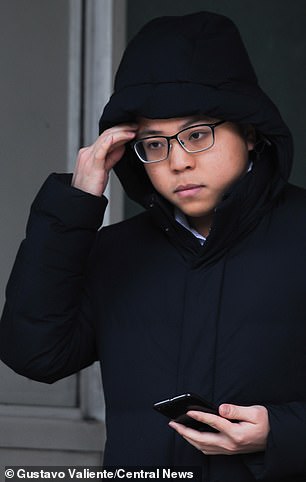 The court was told some people from social media were not identified but police arrested and questioned the four defendants.

Miss Eniola said: ‘The vehicle was severely damaged, it was out of service for 34 days.’

Ambulance bosses claimed the vandalism ‘put a dampener’ on the World Cup celebrations.

But football fans rallied to raise cash for the repairs, with Millwall supporters pulling together £10,000 alone.

A Skoda dealership also offered to repair the vehicle free-of-charge, so the money raised went towards restoring a historic ambulance instead.

Miss Eniola said the criminal damage charge has a starting point of 12 weeks in prison and all defendants were of ‘good character.’

Chair of the bench Finola Gowers bailed the four to appear at Inner London Crown Court on January 8. 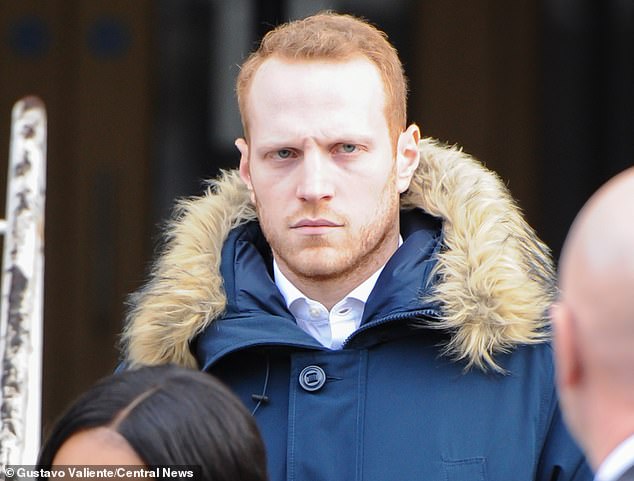 James Elton, 27, is pictured leaving Camberwell Magistrates Court in London after appearing in the dock accused of criminal damage there today