A woman with a huge stomach who doctors thought was pregnant actually had a cyst weighing four stone (26kg) – the same as seven newborns.

Keely Favell, 28, of Swansea, assumed she was slowly putting on weight when three home pregnancy tests came back as negative.

Her swollen stomach drew questions from strangers about a due date, which Ms Favell, who has been with partner Jamie Gibbins for 10 years, went along with to spare embarrassment.

She became concerned as she ballooned from a size 14 to a 22 despite eating healthily, and began to experience blackouts and difficulty breathing.

Doctors eventually referred her for an ultrasound, which revealed the alarming cyst, when numerous blood tests confirmed she was not pregnant.

She had the ‘large ovarian mass’, which she nicknamed Mr Whippy, removed in March, four years after it began to grow.

‘This time last year I thought my biggest worry was not being able to go to my work Christmas party because I wasn’t thin enough to find an outfit to do so’, said Miss Favell, in a blog about her ordeal.

‘Little did I know that I was harbouring a medical alien!’

Ms Favell started putting on weight on in 2014, but when tests revealed she was not expecting, she assumed she was getting fat and was reluctant to see a doctor.

She said: ‘Having grown up with a dad as a doctor, I had become a bit of a medical coward, so seeing the GP was not my first option.

‘I was also afraid that I would be dismissed as merely being fat which, without surprise, was the GP’s initial diagnosis.’

Ms Favell carried on as normal, weighing 23 stone (322lbs), but not without queries from those around her, many of whom believed she was pregnant.

She went along with this for a while to avoid embarrassment, The Mirror reported.

But when she blacked out at her office admin job, Miss Favell realised something more serious was happening and sought medical help again.

After doctors ruled out pregnancy and a side effect from medicines she had stopped taking six months earlier, they sent her to the hospital for an ultrasound in January 2017. 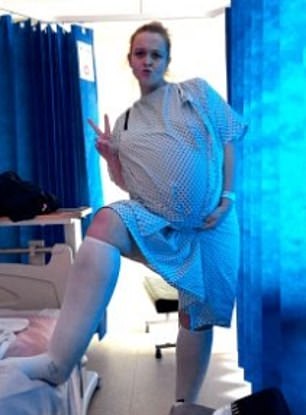 She had the ‘large ovarian mass’ removed in March, four years after it began to grow (pictured on the morning of her surgery)

The results of this led to an emergency CT scan which finally revealed a huge cyst growing on Ms Favell’s ovary.

She wrote: ‘My world fell apart sat at the consultant’s desk as he explained he was unable to confirm what it was exactly, or how big it was.

‘He couldn’t say whether there was more than one and he couldn’t guarantee that it/they were not attached to other organs.

‘He could, however, guarantee that I would lose one ovary, and if it had attached to other organs, my hospital stay could be up to a few months.’

Ms Favell was referred to a high-risk obstetrics consultant in February, where the true extent of her abnormal growth was revealed.

Ms Favell was booked in for surgery exactly a month later, which she said felt like she was signing her life away.

Whilst waiting for her operation, her stomach swelled another five inches.

She finally went under the knife at Swansea’s Singleton Hospital in March last year.

What she hoped would be a routine hour-long operation ran for five hours as her surgeon removed a cyst weighing 26kg (4st 1lb).

With newborns averaging 7lb 7oz, Ms Favell’s benign cyst – it was not cancerous – weighed the same as septuplets.

Ms Favell now has a 30cm scar from her sternum to her pelvis but was back to living a normal life soon after.

‘The shock on my family’s faces said it all,’ she wrote. ‘I was literally half the woman I was going down.

‘Although there have been a few hiccups along the way, some of which are still yet to be sorted, I am now of much better health than that of last year. Both physically and mentally.’

And Ms Favell told The Mirror: ‘I lost sight of how difficult even simple things like driving a car or walking up the stairs had become. I was sore but walking around felt amazing!’

Ms Favell lost her right ovary in the surgery but medics say her odds of becoming a mother are unaffected.

She’s also unhappy about a side-effect of pregnancy all mothers dread.

‘At 28 and even though I’ve never been pregnant, I’ve been left with stretch marks,’ she said.  ‘Losing my lump gave me my life back.’

WHAT ARE OVARIAN CYSTS?

An ovarian cyst is a common condition in which a fluid-filled sac develops on a woman’s ovary.

They often do not cause any symptoms and disappear on their own, but can be caused by a more serious underlying condition such as endometriosis.

But if they do not and are not seen by a doctor they have the potential to grow out of control.

Symptoms can include pelvic pain, pain during sex, a change in periods, needing to urinate more often, and bloating.

The two main types of ovarian cyst are functioning cysts and pathological cysts. Functional cysts – the most common type – develop as a normal part of the menstrual cycle and are usually harmless and disappear quickly on their own.

Pathological cysts are ones which form because of abnormal cell growth, and are much less common.

The vast majority of cysts are non cancerous (benign), but some can be cancerous – malignant cysts are more common among women who have been through the menopause.

It’s hard to know how many women get ovarian cysts because many disappear without ever having been noticed, but many women will have one at some point in their life.