A woman whose dog died after a vicious attack by a homeless man in Brooklyn’s Prospect Park decided to take justice into her own hands and confront her dog’s killer – until her plan backfired – with the doggie killer still on the loose.

Jessica Chrustic, 41, beloved golden retriever mix Moose died days after he was brutally beaten during an early morning attack on August 3 at Picnic House and Villa in Prospect Park.

The homeless man who committed the heinous act has not been caught and is still out roaming the streets and the park, as police say they continue to investigate.

On Friday, Chrustic went to the park after someone told her he was there collecting cans, determined to get justice for Moose.

The Brooklyn resident and beekeeper raced to the area ready to meet her dog’s killer face-to-face. Armed with pepper spray, she trailed the suspect along the narrow streets and walkways –  walking along 5th Street into Prospect Park and then to Garfield Place.

When she spotted him, she told The Daily News he had been talking to himself, and at one point, he asked her, ‘Why are you following me?’

Chrustic says she did not reply but said the suspect appeared agitated. As she trailed him over the course of 15 minutes she was making calls to the detectives assigned to the case.

At one point, she lost track of him when he suddenly emerged and started chasing her as he held a stick and a can of Mace.

‘He came out of nowhere between some cars at full speed. He chased me to 7th, and then to Polhemus,’ she said.

Jessica Chrustic, 41, has been grief-stricken since her beloved golden retriever mix Moose was brutally beaten on August 3. He died days later from the injuries he sustained 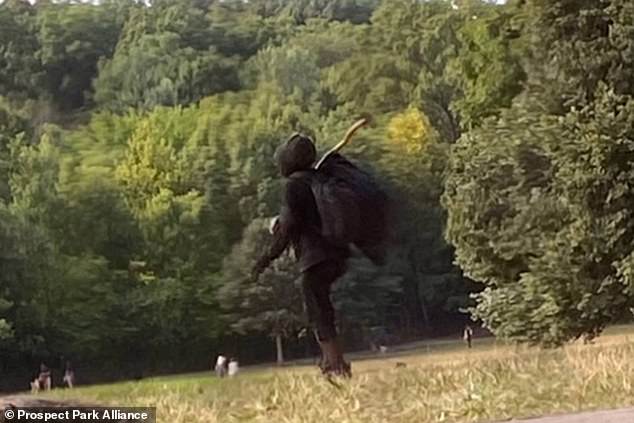 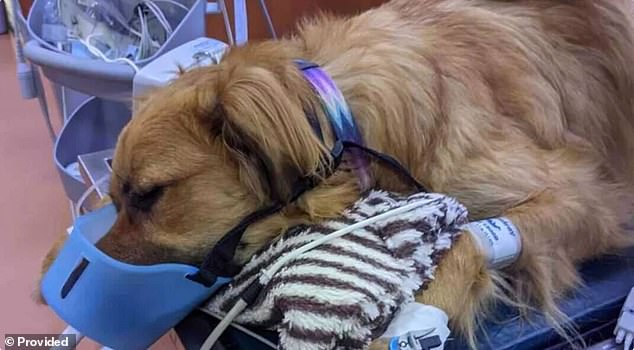 The golden retriever mix, who suffered significant injuries, died in surgery days after the attack

The pepper spray she had brought wasn’t working and at that point she bolted – running faster, she said, than she’d ever run before.

‘I’ve run five marathons and I’ve never run faster in my life screaming at the top of my lungs, screaming ‘Help me,’ Chrustic said, the news outlet reported.

Police responded to the woman’s 911 call and when they arrived she went into the police car and spent some time driving around trying to locate the assailant but he had already disappeared.

‘I want to be able to leave my house without being terrified and sleep through the night without wondering if I’m going to get a phone call to come identify him. I am really shaken,’ she said.

An NYPD spokesperson said the police filed a complaint report for menacing, the news outlet reported.

Chrustic revealed that ‘anything and everything that has to do with him causes me a great deal of anxiety.’

‘I made a pledge to myself and to Moose I would not rest until he was apprehended.’

The death of Moose has become a major issue in Prospect Park, raising broad and often divisive questions about safety, justice, compassion, and the city’s treatment of the mentally ill.

Online pleas for help bringing Moose’s killer to justice sparked anger among some locals in the progressive enclave – who suggested the police should not be called in to solve the dispute involving a black suspect they deemed vulnerable.

An NYPD spokesperson disputed Chrustic’s claim that the case was closed, telling DailyMail.com in a statement: ‘The investigation is active and ongoing.’

Detectives have posted flyers hoping to garner attention to the case. The flyers read: ‘WANTED FOR ASSAULT. Suspect only – no probable cause to arrest.’

A sketch of the attacker and description – an unknown black male with black hair and brown eyes. He wears white colored beads on his wrist and carries a wooden stick. 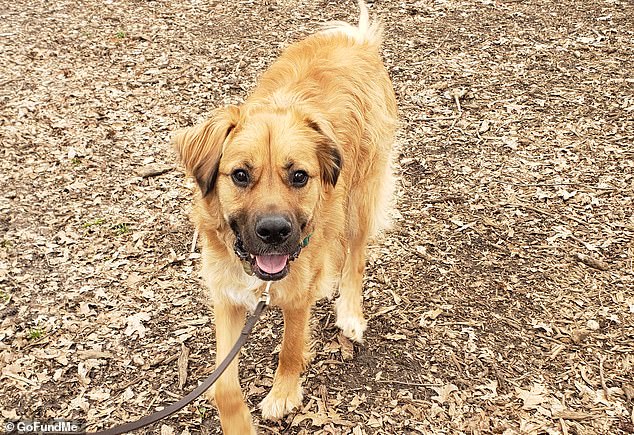 Moose, a golden retriever mix who was killed by a homeless man in Prospect Park on August 3 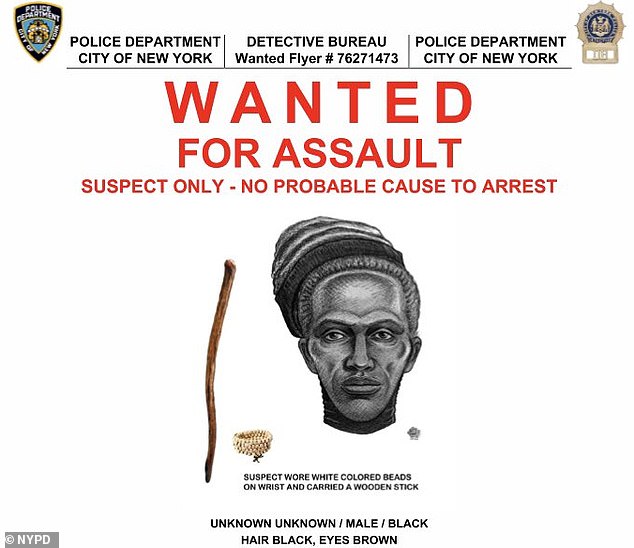 Police released this sketch of the suspect. Area residents say they frequently see the man in Prospect Park but claim the NYPD has done little to apprehend him

The August 3 attack unfolded in the early morning just before 6am, when Chrustic was walking Moose and came upon a man rifling through a trashcan next to the walking path.

She said the assailant first splashed her and Moose with a bottle of what appeared to be urine, and then swung a long stick, hitting both her and the dog as it lunged to protect her.

Chrustic escaped significant injury, but Moose had a shattered tooth, and later died of sepsis from a perforated intestine, an injury that vets had not initially discovered.

The case has divided opinion in the liberal enclave of Park Slope, which borders Prospect Park, with some neighbors calling for an all-out manhunt for the attacker, and others insisting that social justice concerns called for compassion.

‘Since the incident the NYPD has continuously taken investigative measures to bring the individual responsible to justice,’ the department said.

‘The NYPD has conducted canvasses of the park with witnesses, posted images of the suspect and increased patrols in the area.’

The debate played out on neighborhood apps such as NextDoor, where some users were appalled at the calls to arrest the suspect, who is black and appears to be emotionally unstable and homeless.

One neighbor, Martin Lofsnes, posted urging neighbors to consider ‘400 yrs of systematic racism which has prevented black people from building generational wealth through homeownership resulting in the extreme disparity we see today.’

‘It’s easy to say that you’re for prison reform and you’re a liberal, until it happens to you,’ Lofsnes, 52, told the New York Times. 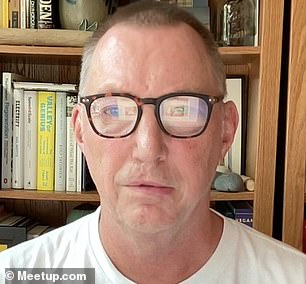 Kristian Nammack, 59, attempted to form a neighborhood watch, but the group fell apart in chaotic debate over social justice

‘When it happens to you, you have to deal with it. You have to take a step back, even in that heated situation where her dog died, and say, ‘What does this do in the larger scheme of things?” he added.

Other neighbors, outraged at the attack, made an ill-fated attempt to form a neighborhood watch patrol they dubbed the Park Slope Panthers.

‘Do we want to organize a community safety patrol, and take our park back? Think what the Guardian Angels did to take back the subways in the 70s/early 80s,’ wrote Panthers organizer Kristian Nammack, 59, in a social media post announcing the group. ‘We may also get to wear cool berets. I’m being serious.’

Nammack, a financial consultant who attended the 2008 Occupy Wall Street protests and describes his politics as ‘left of Lenin’, decided to organize the group to clean up the neighborhood. 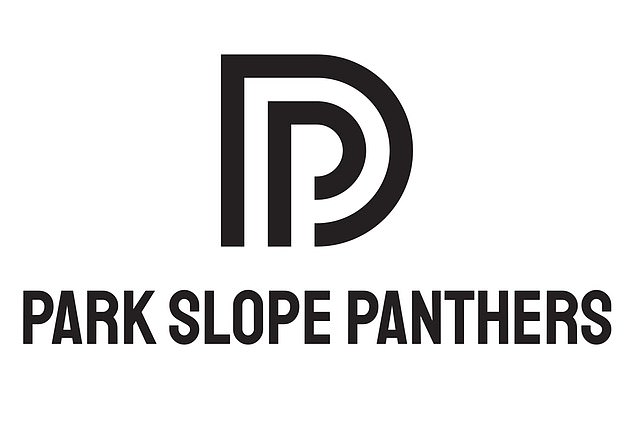 Modeled after the Guardian Angels, the Park Slope Panthers disbanded after a single chaotic meeting, which was disrupted by protesters

‘The goal is to be eyes and ears and to take our neighborhood back,’ read a call to action on MeetUp.

However, the Panthers disbanded after a single chaotic meeting, which was disrupted by protesters.

The protesters accused the mostly-white group of appropriating their name from the Black Panthers, and of supporting a racist police state.

‘Using the Panthers as your group’s name is kind of abhorrent to me. It feels antithetical to what the Black Panthers would stand for,’ one dissenter said, according to Common Sense.

Another person – a white woman named Sky – chimed in to debate the very definition of crime.

‘Crime is an abstract term that means nothing in a lot of ways,’ she said. ‘The construct of crime has been so socially constructed to target black and poor people.’

Anyone with information about the attack is urged to call the NYPD’s Crime Stoppers Hotline at 1-800-577-TIPS (8477).