A husband and wife who learned to love again after a stroke left him unable to talk have become parents.

On September 27th 2014, Russell, 40, and Rachel Hanford, 35, from Dorset, tied the knot at the Guildhall in Poole in front of 100 guests. But just five weeks later, he was at work when he suffered a stroke caused by a blood clot in his brain.

The stroke damaged a part of Russell’s brain that affects his communication. leaving him struggling to speak, and to write, but he has miraculously made a physical recovery and is able to enjoy the sports he loves.

Now, the couple have told how they’ve welcomed their daughter Amandine, seven-months-old, into the world.

‘Life will be what it will be and there are some things you can’t control, like what happened to Russell, but we never wanted to let that get in the way of leading the life we both want – and having a family,’ said Rachel, an Account Manager with the RNLI.

Rachel Hanford, 35, from Dorset, told how her husband Russell, 40, suffered a stroke caused by a blood clot in his brain just five weeks after their dream wedding on September 27 2014 (pictured) 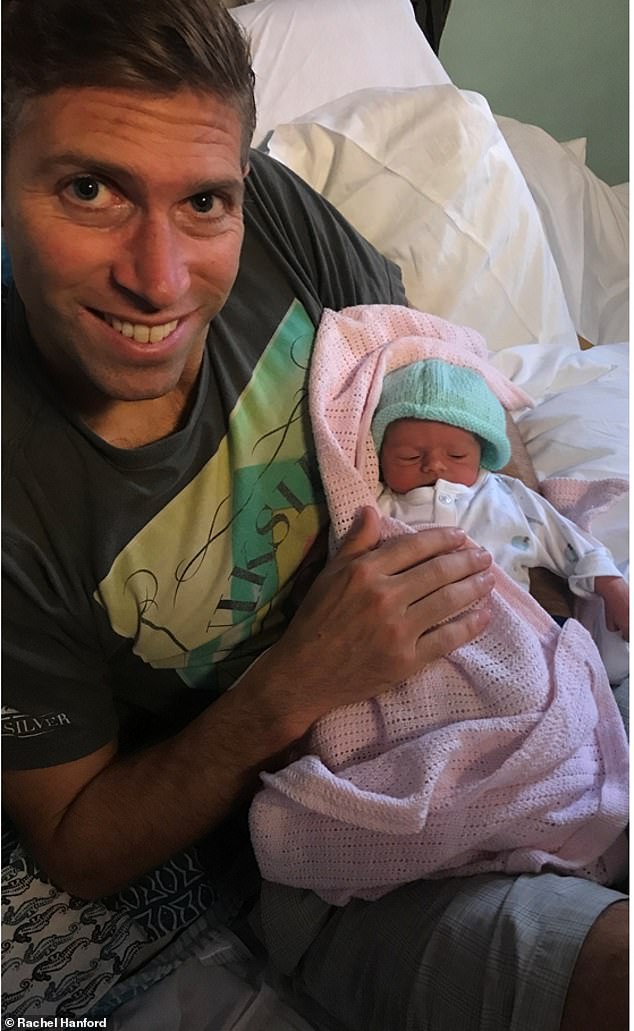 The couple have now become parents and welcomed their daughter Amandine into the world, weighing 5lbs 4oz. Pictured, Russell with his little girl, now seven months

She continued: ‘It’s also been really important to us to work with the British Heart Foundation to show people the reality the of heart and circulatory disease and hopefully also inspire others who may be in a similar situation.’

After suffering a stroke, Russell spent three weeks in Southampton Hospital before being transferred to Poole where he was discharged a day later.

However, his emotions had changed completely – and whereas he used to be loving and affectionate, frequently telling Rachel he loved her, he looked blank.

She decided to shower her husband with affectionate words and hugs, to get him to ‘remember’ that he loved her, then the following summer, he managed to tell Rachel himself.

And as Russell continued getting better and Rachel knew he was going to be fine physically, the pair decided to try for a baby.

‘I’d always thought that we’d have children but we weren’t a couple who had made any hard plans like “ we’ll get married and then after three months or whatever we’ll try for a baby “,’ explained Rachel. 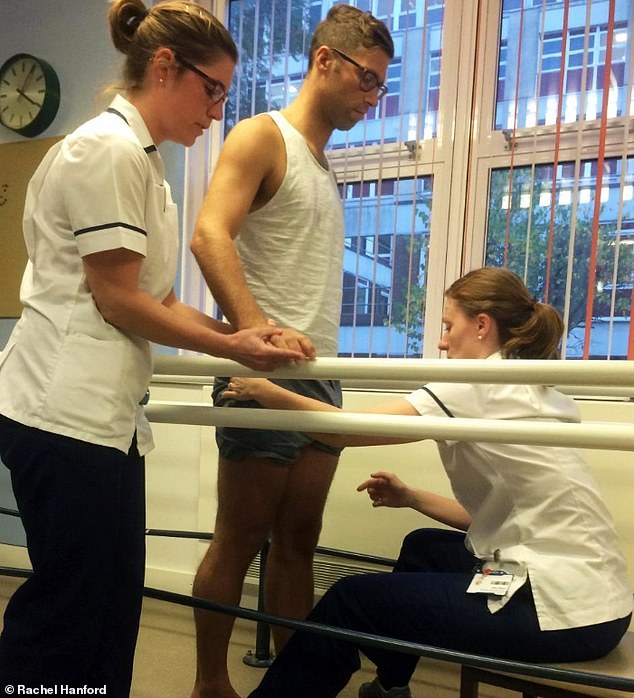 Rachel says a few months after Russell (pictured undergoing therapy after his stroke) left hospital, the consultant was very blunt and told them that after six months they could expect no further improvement 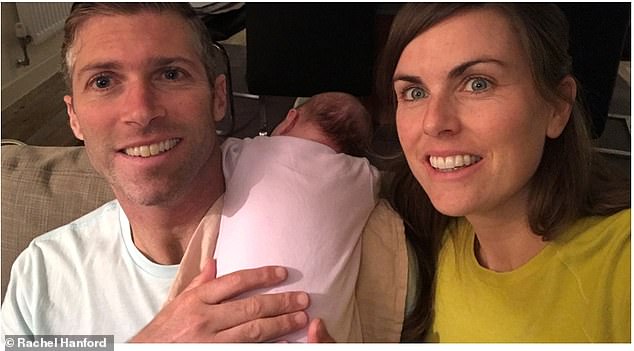 The couple told how they were delighted following the birth of their daughter, with Rachel adding: ‘We’re so grateful we have her and that she’s fit and healthy’

‘But then he had his stroke five weeks after getting married and I remember thinking quite early on afterwards: “Oh My God, what if we can’t have babies now?“ – and that was really upsetting.’

‘It took us a good couple of years to get our lives back to “normal” and we felt we needed the next thing in our lives,’ she continued.

‘Also it was on my mind that if anything was to happen to Russell – because the chances are probably higher than the average person that he might not live as long as he should – I’d hate to not have a piece of him. That was really important to me.’

The couple tried to conceive for eight months and just as it was getting to the stage where they thought they may have to go down another route, Rachel found out she was pregnant – a moment she describes as ‘surreal.’

• Stroke is the single biggest cause of severe disability in the UK.

• Around 1.3 million people living in the UK have survived a stroke or transient ischaemic attack (TIA).

Rachel had a straightforward pregnancy, but admits it was a ‘worrying’ time for everyone.

‘I didn’t realise how worrying it was going to be,’ she said. ‘I worried quite a lot, especially if she didn’t move for an hour. I didn’t have any morning sickness and kept my fitness up and kept running until the 22nd week.’

‘Nothing quite prepares you for being parents, especially as Amandine arrived three weeks early,’ explained the mother-of-one.

‘I hadn’t even started my maternity leave yet. I was due to start my leave the week I had her and was planning on having a nice relaxing two weeks off so we could mentally prepare ourselves for her arrival.’

Speaking of Russell’s reaction following his daughter’s birth, Rachel says his ‘proud and and amazed looks said it all.’

‘He was just overwhelmed by it and the look on his face when she was born said: “I just cant believe we’ve got a baby,“ said Rachel.

‘I don’t think he realised how much he’d instantly love his daughter and you can see that look in his eyes. I also felt the same and couldn’t believe she was here.’ 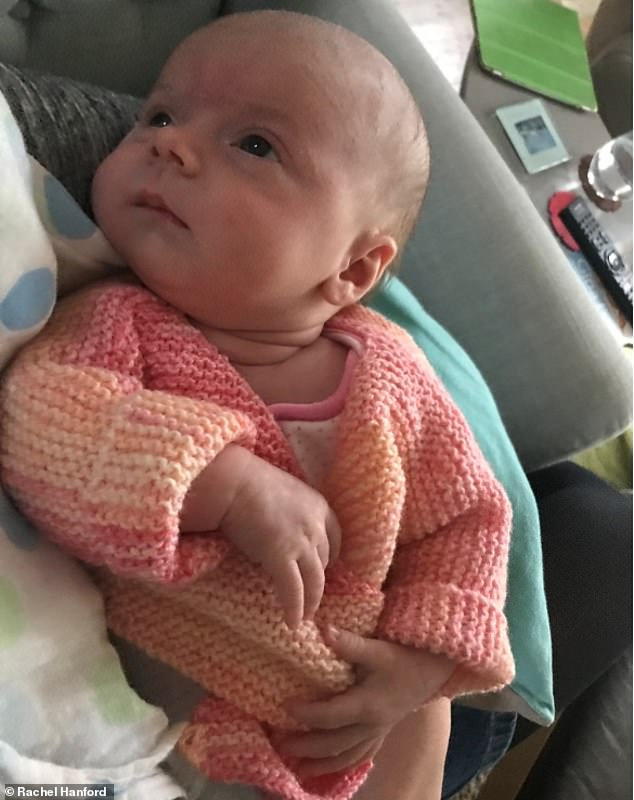 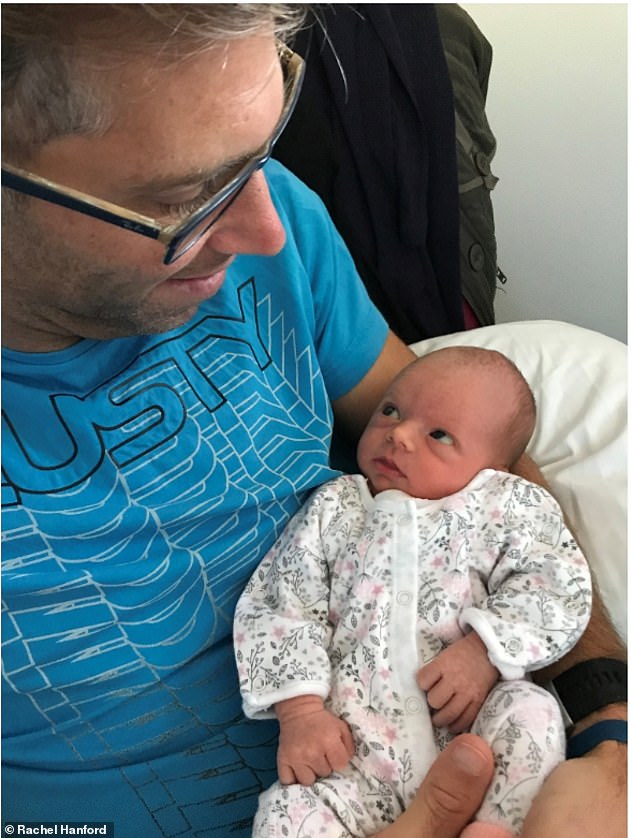 Speaking of Russell’s reaction to Amandine’s birth, Rachel said: ‘He was just overwhelmed by it and the look on his face when she was born said: “I just cant believe we’ve got a baby.“ Pictured together

‘Because of everything we’ve been through and it happened so quickly it did feel very surreal.’

And nine days later, after Rachel was given the all clear following a bout of high blood pressure, the family headed home.

‘We were so excited to go home but then it was a bit daunting because I realised it was just me and Russell looking after her now,’ explained Rachel. ‘She is our life, it’s all about her and she has completely changed our lives.’

She continued: ‘We’re so grateful we have her and that she’s fit and healthy. All we wish for is that she has a wonderful life and all the opportunities we can give her.

‘We are lucky living near the beach and she’s so lucky to have Russell as her dad because of his get up and go and his love for sport.’

When Rachel arrived at Southampton Hospital she was told that her new, fit and handsome husband had had a major stroke.

Both sets of families arrived and took turns sitting by Russell’s bedside late into the night as he lay unconscious.

By the next morning doctors were clear that a clot in Russell’s brain had affected the right side of his body.

Rachel was just relieved that she still had her husband – she had spent that dreadful night sitting with Russell, pacing around and wondering if she was going to be made a widow just weeks after her perfect wedding.

It seemed impossible that Russell – tanned, young and fit – had suffered such a catastrophic stroke.

Doctors thought that, just as when Russell had had a series of heart attacks aged 23, a clot had formed in one of the coronary arteries of his heart. Only this time part of the clot had broken off and travelled to his brain, causing the stroke.

Russell spent the next three weeks in hospital. His right side was paralysed, and his face drooped. When he opened his mouth to speak, nothing came out.

Gradually Rachel began to see improvements. After a few days he could get out of bed, and he appeared to smile when Rachel or a family member came to see him.

He was transferred to Poole Hospital and discharged after three weeks. And then the mammoth task of getting Russell back to health and fitness began.

Russell had always been super fit, and now he was very determined. With regular physiotherapy he began to make great strides towards physical fitness.

He now cycles, runs and regularly goes windsurfing with his friends.

But for Rachel the biggest challenge was the apparent change in personality that Russell had after the stroke. The man who came home from hospital didn’t seem like the same man she had married.

Russell’s emotions had changed completely. Whereas he used to be loving and affectionate, frequently telling Rachel he loved her, now he looked blank and rarely touched her.

Russell was having speech therapy three times a week and he did make some progress. The couple were told by doctors and therapists that Russell would make the most progress in the first six months, and after that it would tail off.

Rachel said at times during Russell’s recovery, his lack of speech and apparent lack of emotion left her feeling terribly lonely.

She decided to shower Russell with affectionate words and hugs, to get him to ‘remember’ that he loved her.

She told him ‘I love you’ over and over, and asked him to repeat it.

Then the following summer Russell managed to tell Rachel he loved her.

However, the stroke damaged a part of Russell’s brain that affects his communication. Russell struggles to speak, and to write.

Rachel has become expert at interpreting the things he tries to say – not only the sounds he makes but also his gestures – and often acts as Russell’s ‘voice’.

‘He’s going to be a wonderful father and give her lots of opportunities to do any activity she wants to do. We’re really excited about seeing her grow and become more aware of life over the next few months.’

‘There are times when I notice a little improvement but it’s never going to be like you and I having a normal conversation,’ she explained.

‘We find with people who haven’t seen him for a while they will notice it more, but we know each other so well that we do have a kind of shorthand for understanding each other.’

‘However, sometimes he will think I know exactly what he’s thinking and then he’ll get angry because I don’t know what he’s trying to say, so it can be a little frustrating.’

The Hanfords are supporting the British Heart Foundation which aims to raise more than £100million each year for research into heart and circulatory disease . In Britain, more than 1.2 million people like Russell are living with the devastating effects of stroke. www.bhf.org.uk 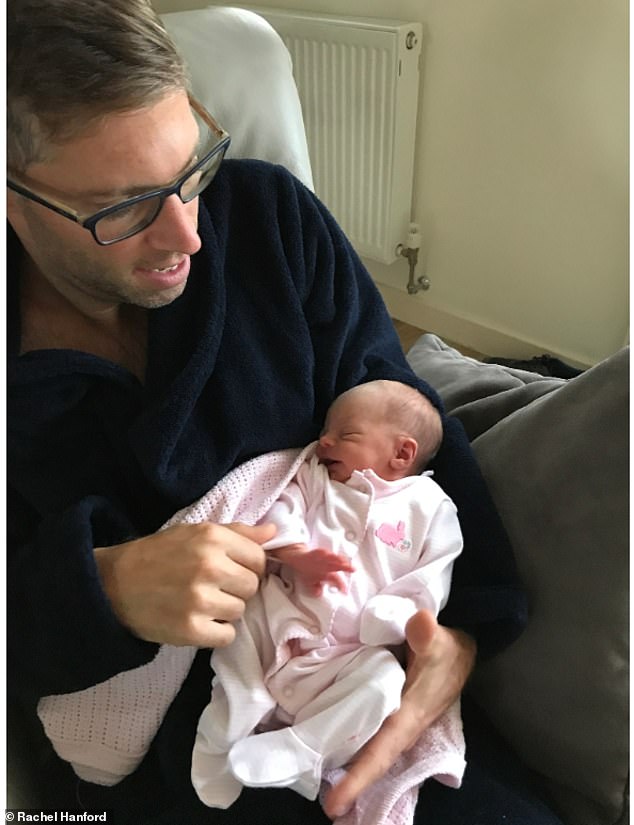 Rachel says that Russell’s speech has ‘improved a little’ since he suffered a stroke. Pictured, with daughter Amandine