A woman whose partner left her for being ‘too disabled’ has been flooded with love stories after making an appeal on Twitter.

Emily Linka, 32, from Liverpool, suffers from Ehlers-Danlos syndromes and a functional neurological disorder. Following a stroke last year, she now uses a wheelchair.

Revealing she was finding it ‘hard to imagine being loved in a chair’, she asked her Twitter followers to send her stories of romance for people with disabilities.

Thousands responded, with people from around the world sending her snaps alongside stories of how they met their partners.

Emily Linka, 32, from Liverpool, opened up about feeling ‘unlovable’ in her wheelchair, and was flooded with thousands of responses online 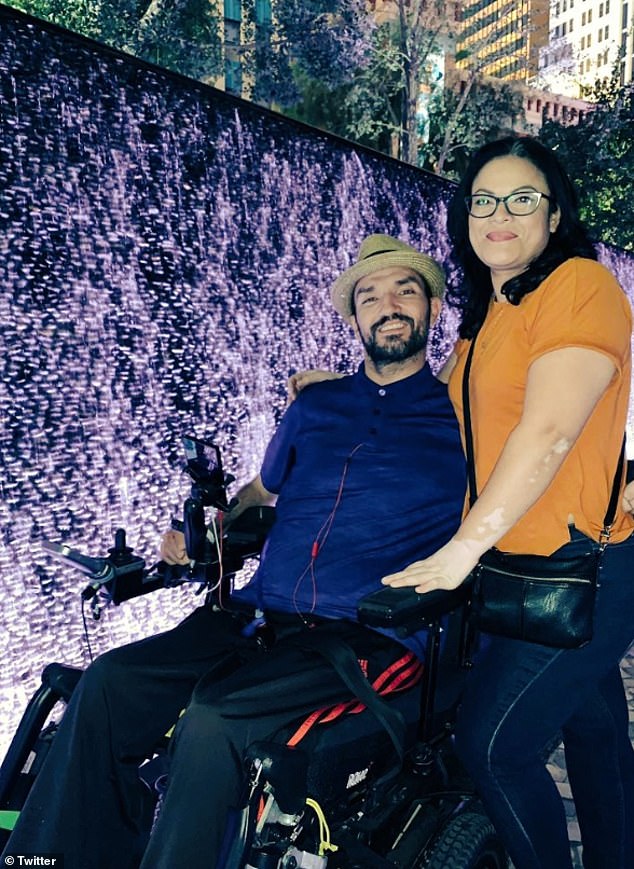 After Emily Linka, 32, from Liverpool, called out for people with disablities to share their love stories, thousands responded on Twitter, including this man from Arizona 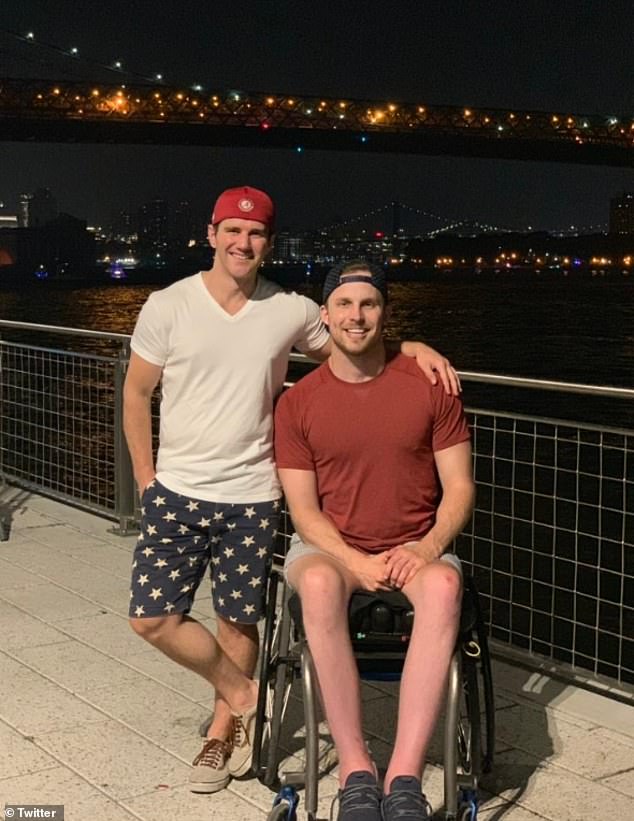 Thousands were inspired by Emily’s call out and sent her their love stories, including one man from Utah who shared a picture alongside his partner 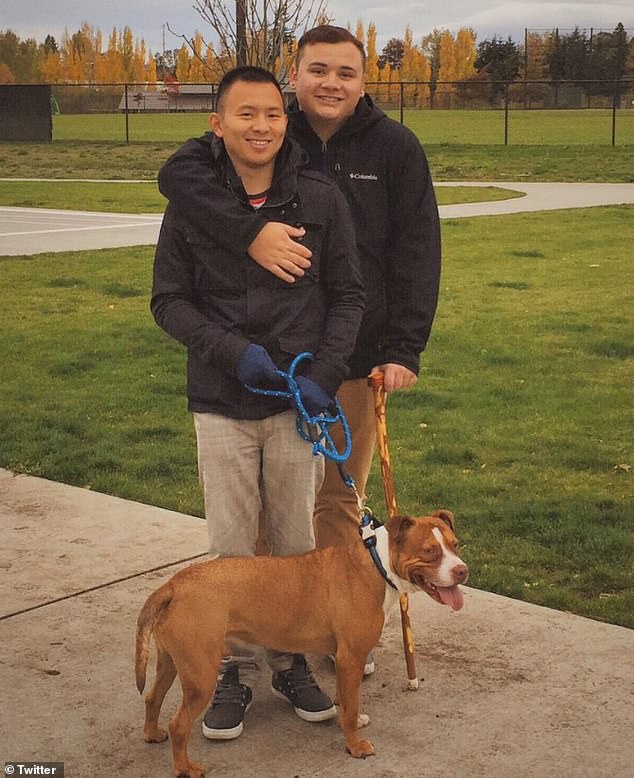 One man, from Canada,  said he hated using his cane but said his partner helped him remember how to love himself 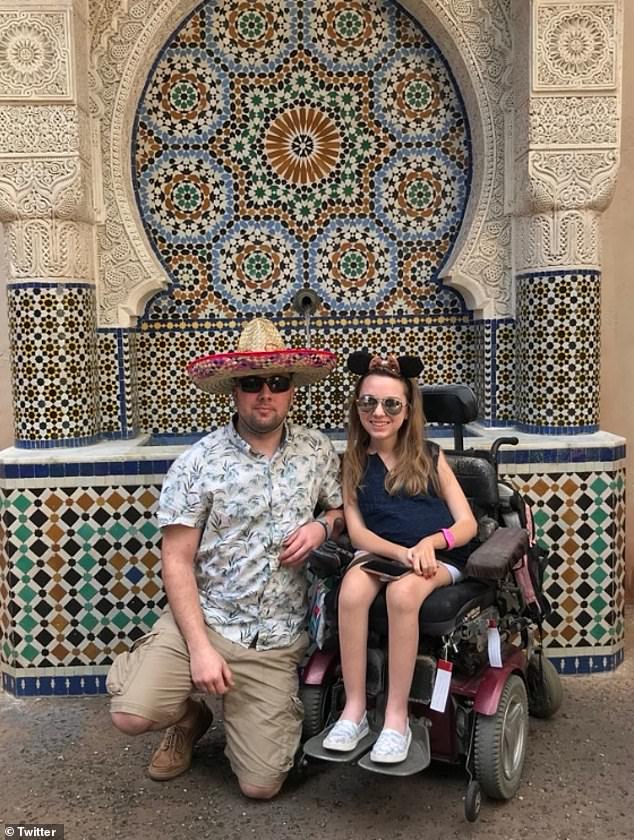 Another Twitter user, from Maine, simply wrote:’It’s a thing!’ as he shared a snap alongside his girlfriend 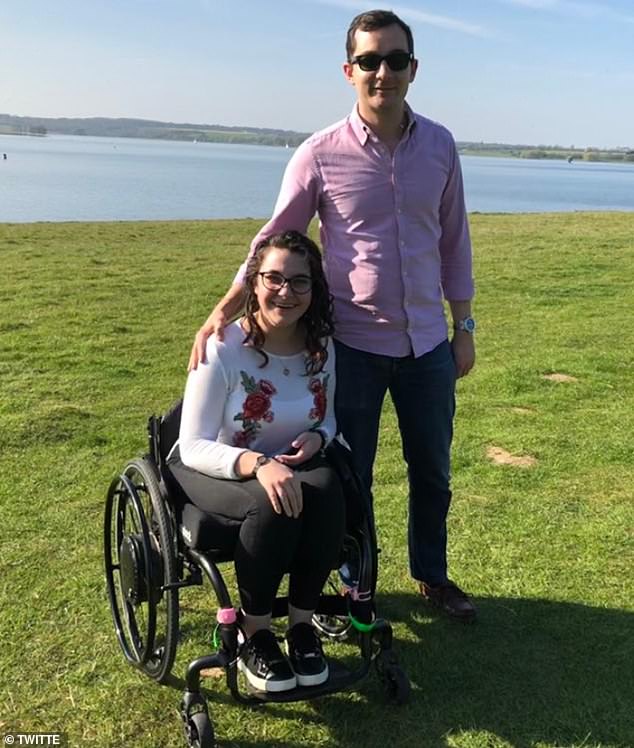 Loved-up couples from around the world send in their photographs and stories to Emily, including one woman from London who described her boyfriend as’ the only person in her life who stood by her’ 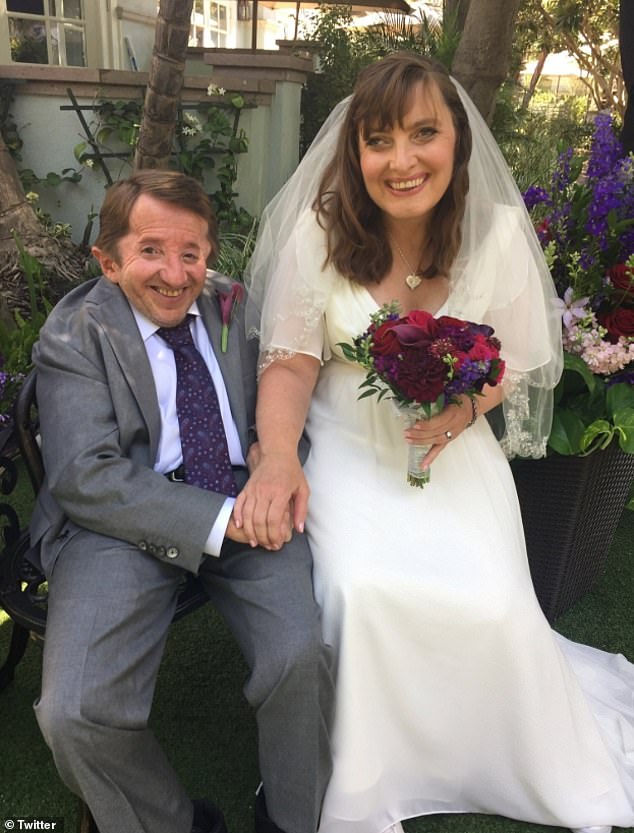 One user from England shared a snap from her wedding day, revealing she and her husband both have physical disabilities 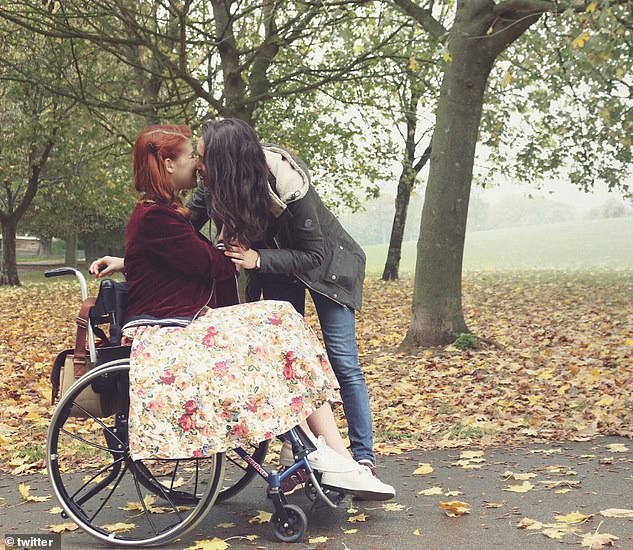 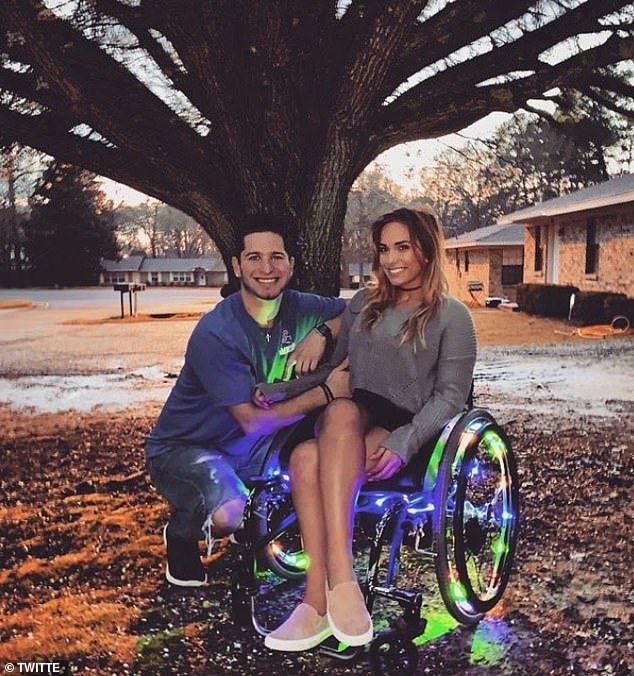 Emily tweeted: ‘If you’re disabled and in a happy, loving relationship, would you mind sharing a photo of you and your partner with me?

She added:’Bonus points for wheelchair users and LGBT folk Brain is finding it SO hard to imagine being loved in my chair.’

Many responded with tales of their own love story, with one person from Colorado writing:’ It’s not me you were asking for but my bf isn’t on Twitter. Almost a year together now and 6 months of that have been really gnarly after surgery that left him in chronic pain. You absolutely deserve to be loved! Sending good vibes to you.’ 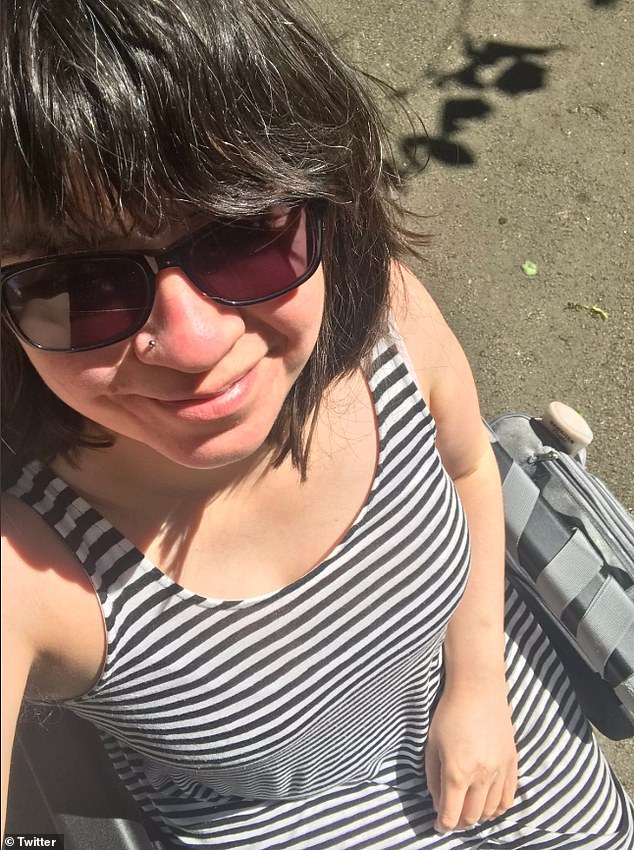 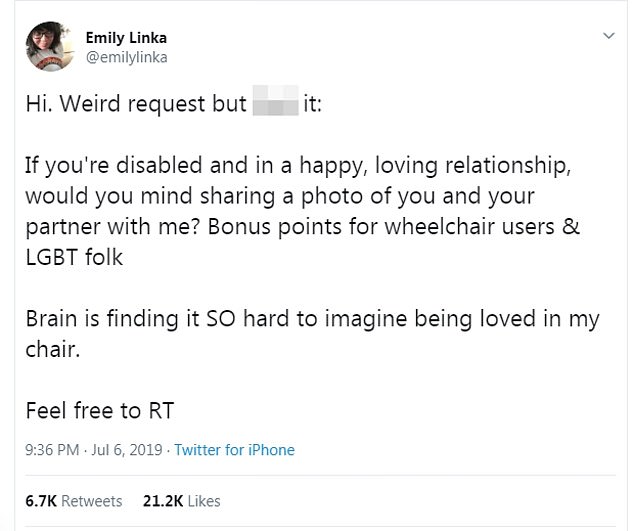 One user from Cambridge wrote: ‘Here’s me and my boyfriend at a little museum! We’re both autistic and he has seizures after getting brain damamge, both trans n both happy!’

Another from Canada commented:’This is years ago it’s painful to see my swollen face from the Lyrica. He’s bigger now and I am much smaller lol. We met when my illness was just beginning and the most terrifying. My previous partner said nobody would ever be with me. I also had a 2 1/2 year old.’

One from Ohio added:’ Hi! We’re queer & going on a year of being together. We’re both chronically ill.’

‘ Hi! I’m bi and disabled/chronically ill and my fiancé is trans and has t2 diabetes,’ another user from California wrote. 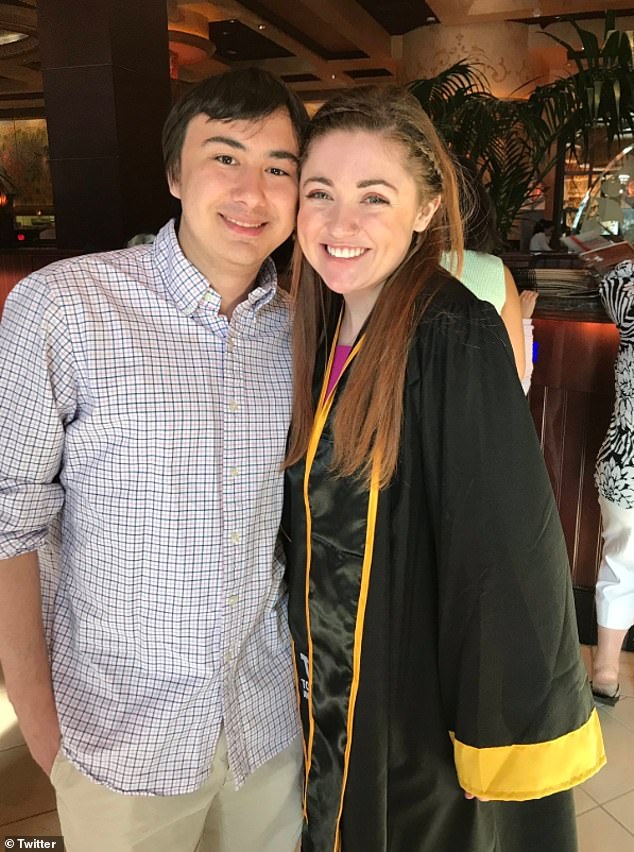 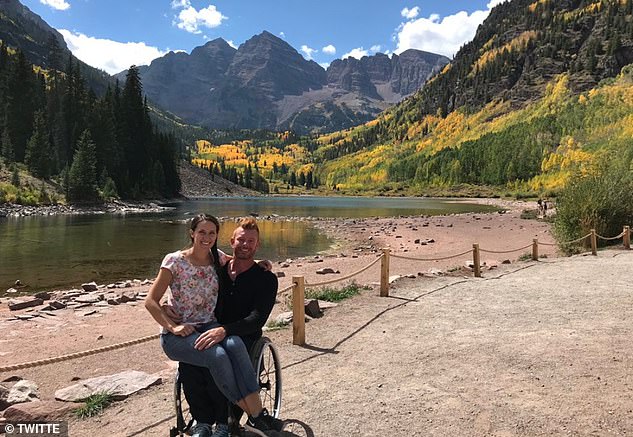 One person from Colorado shared this snap of her and her boyfriend, revealing he’d been left in chronic pain after surgery but that everybody ‘absolutely deserves to be loved’ 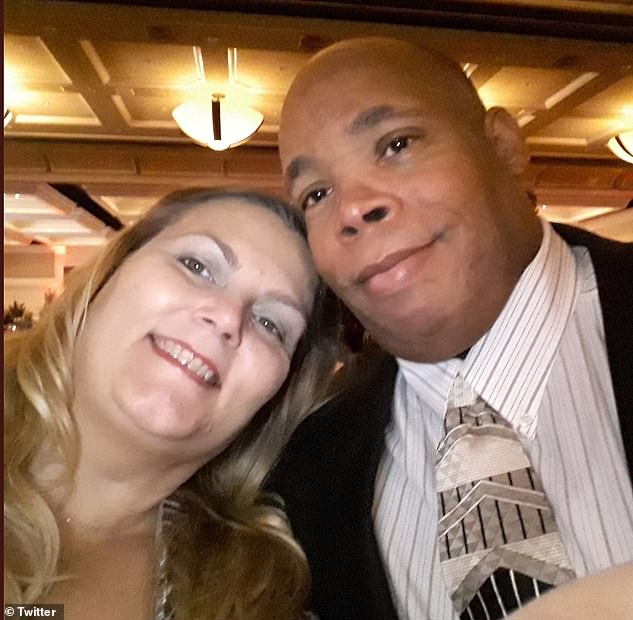 Another woman shared that she’d been with her partner for 35 years, and that she suffered from multiple sclerosis 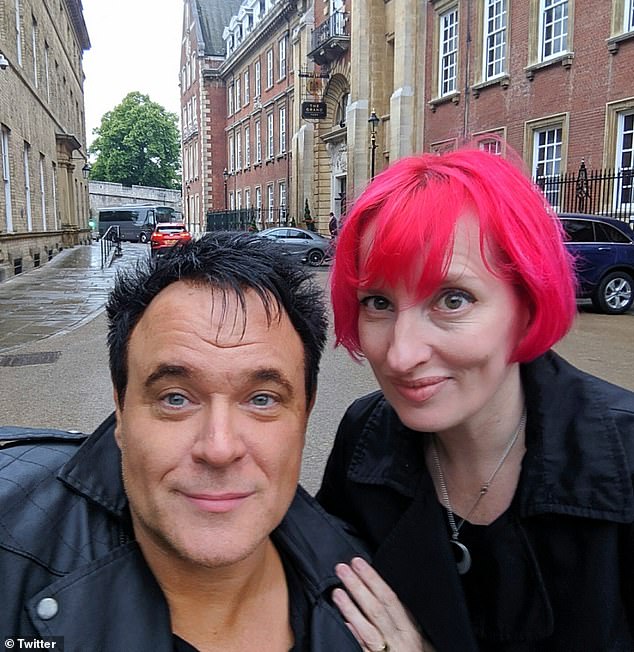 Another man from London shared snaps of him with his partner, and said his wheelchair had ‘never’ been a barrier for him dating 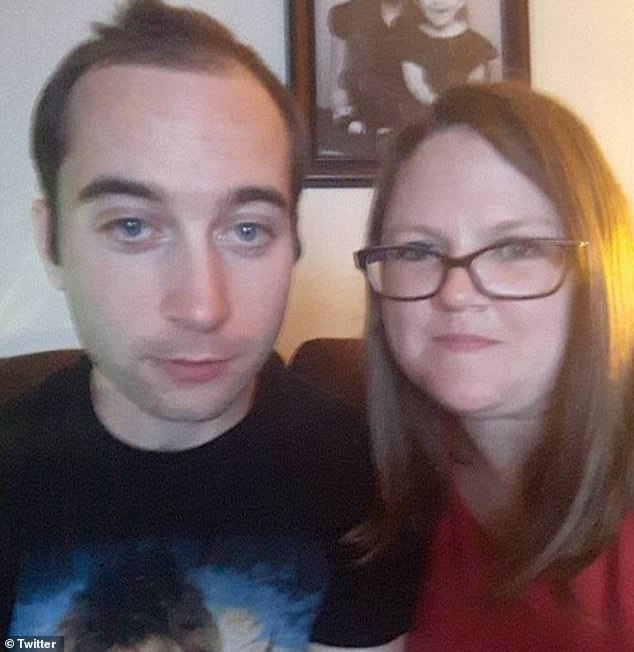 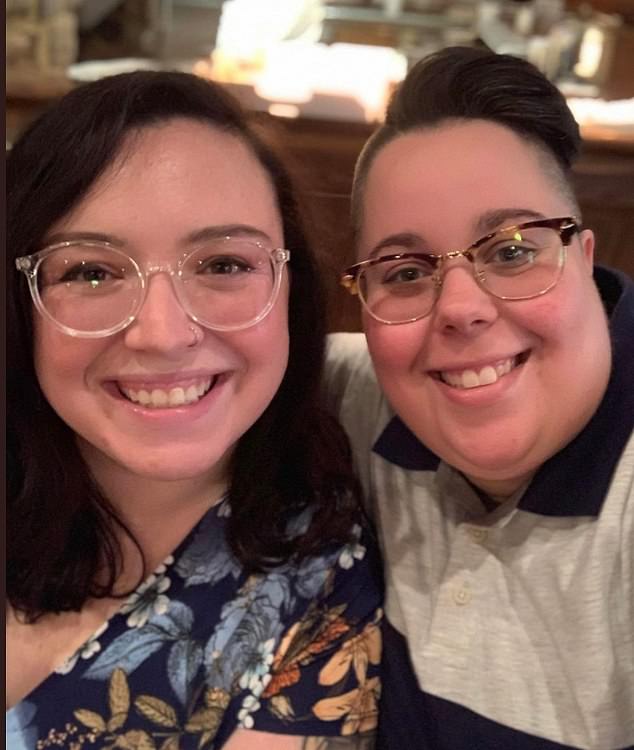 One user from Ohio shared a snap with her girlfriend, suggesting they’d been together for over a year and were both chronically ill 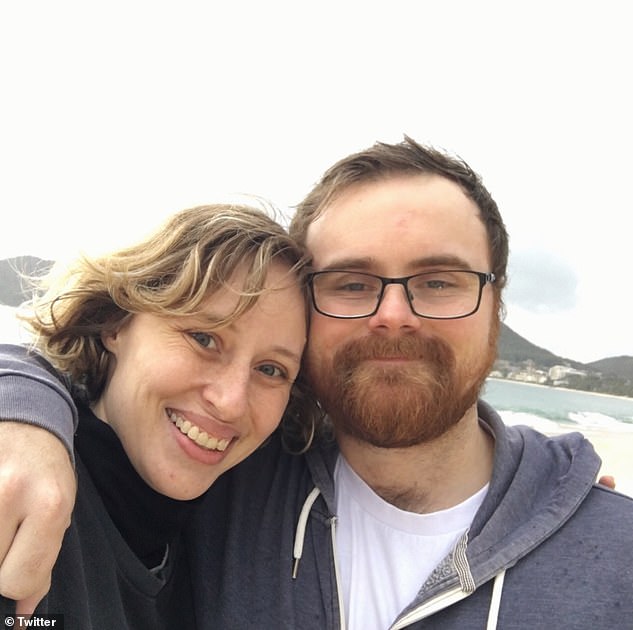 Another woman, whose location is unknown, shared a picture along with her boyfriend, commenting simply:’Austistic and bi’ 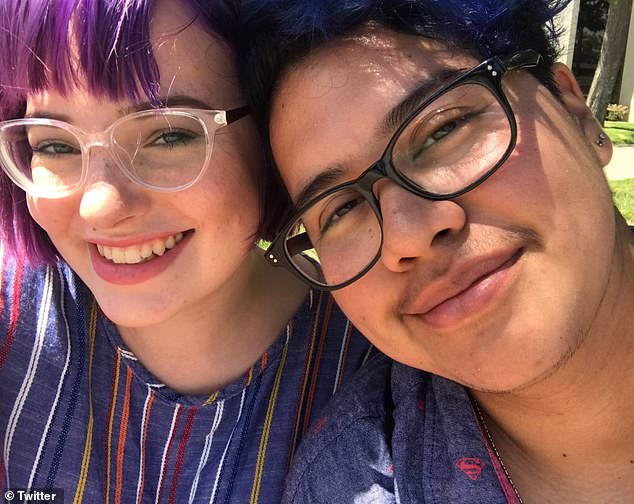 One woman from California posted a snap with her fiance, explaining that they’re transgender and have diabetes 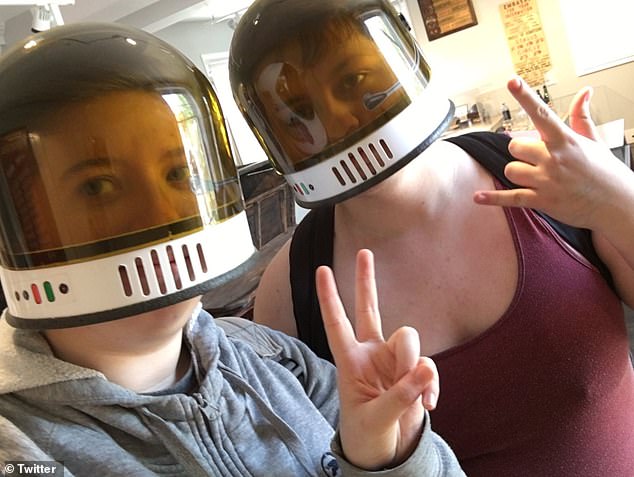 Fun at the museum! One user from Cambridge posted a photograph with her boyfriend on a day out, saying both are autistic 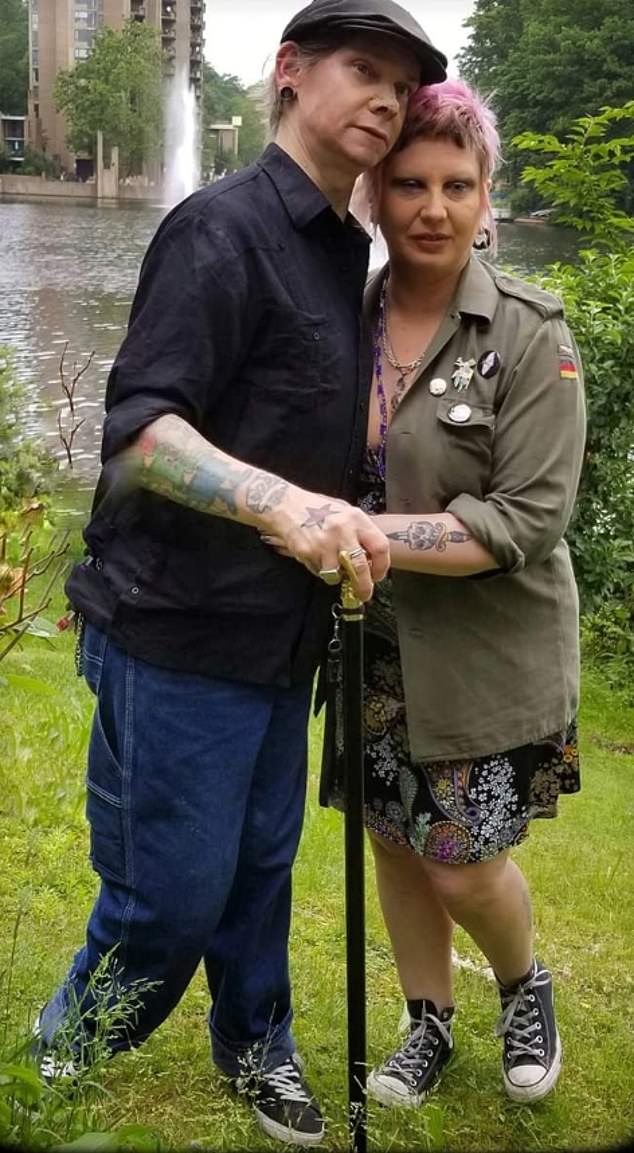 Another from New York shared a picture alongside her husband of 10 years, explaining that she had a mentla illness while he had a physical disability

Hundreds of Twitter users responded to Emily’s tweet from around the world, sharing snaps of their own happy relationships

One user from London commented:’Been dating @digidiane for 24 years this August, married 14 Nov 5th. Love each other to bits & have done since we first met. Never found my wheelchair as a barrier to dating.’

He added:’If someone was put off then it’s their loss & a lucky escape for me. Go out there & mingle, have fun.’

Another wrote:’Me and my husband of 10 years. He has physical disability, I have mental illness. And you ARE lovable!’

Emily posted that she had been overwhelmed by the mass of responses, saying it had made her ‘so emotional’.

She tweeted:’I’m having such a hard time coming to terms with using my wheelchair and last year I was broken up with for being too disabled (and that was before I even used a chair at all). It’s so wonderful to be blessed with all these amazing stories of diverse love.’