A woman with a mysterious itch on her legs has been diagnosed with an aggressive form of cancer that may kill her.

Jade Baldwin, from Pitsea in Essex, is now desperately trying to raise £50,000 for a life-extending immunotherapy drug to tackle her Hodgkin lymphoma.

Ms Baldwin, 35, claims she has been told the drug isn’t available on the NHS for her type of cancer – but watchdogs Nice state it is recommended for Hodgkin lymphoma patients that don’t respond to treatment.

The project manager is battling the disease with her father, who also has terminal cancer. The pair sometimes receive treatment in the same hospital together.

Ms Baldwin, who hasn’t given up her job and works mostly from home, is now relying on the generosity of others so she can try nivolumab.

Jade Baldwin, from Essex, is now desperately trying to raise £50,000 for a life-saving immunotherapy drug to tackle her Hodgkin lymphoma (pictured before her diagnosis)

Ms Baldwin had been suffering from mystery symptoms for two years before she finally received a diagnosis.

Speaking for the first time about her ordeal, she said: ‘I think the main symptom for me was an itch, but there was nothing to scratch.

‘I have got scars from where I scratched so much. I also got sores and I was very tired, I was literally falling asleep at work.

‘It was really hard to diagnose, because most people get enlarged lymph nodes, which is why they go to the doctor.

‘Unfortunately I didn’t have any of that. They think I got the cancer for a few years before I was diagnosed.’

Ms Baldwin was eventually diagnosed with Hodgkin lymphoma in November 2016, after she visited hospital after experiencing breathing problems.

Doctors gave her antibiotics to deal with an infection and asked her to return two months later for tests.

Then in February 2017, doctors found that her lymph nodes were swollen when she visited the hospital with her partner Vince. 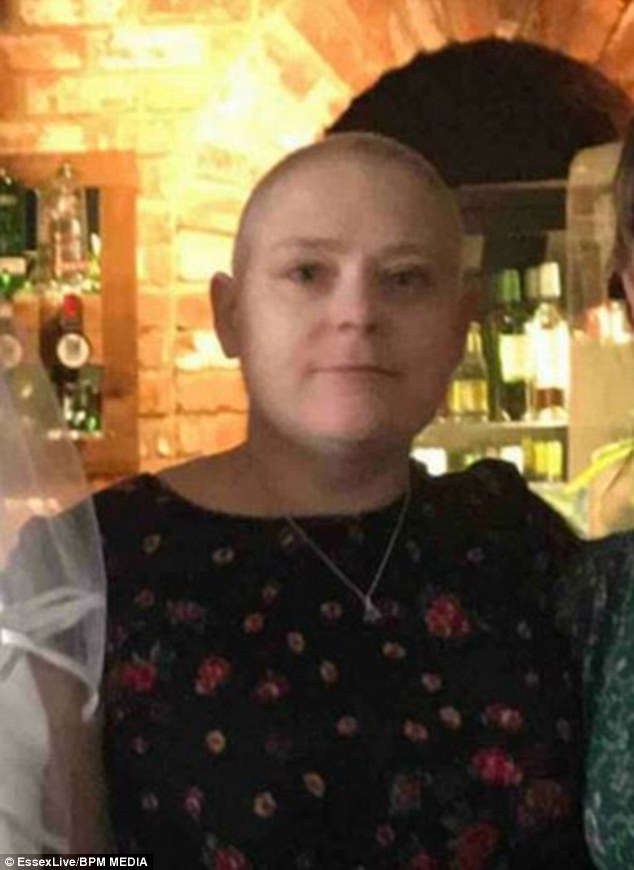 Ms Baldwin said: ‘Once they said the lymph nodes were swollen I Googled it, so when I went back I was expecting it to either be just an infection or Hodgkin lymphoma.

‘They put me and my partner in a room and said the doctor would be coming. You know it’s probably bad when the doctor is giving the news.

‘I had been feeling ill for so long it was a relief to know what was wrong and I thought something could be done about it.’

Ms Baldwin then discovered her cancer was at stage four – ‘the worst it could be’ – when she went for a scan.

She began chemotherapy in March, undergoing gruelling sessions every two weeks for six months, describing it as ‘scary’ and the ‘start of a new life’.

A scan two months later showed Ms Baldwin was in remission – but a second scan in August revealed the cancer had spread to her spine, ribs, lungs and hips.

In November last year, Ms Baldwin began her second stage of treatment and was given a stronger form of chemotherapy.

She said: ‘I don’t know if that was the worst or the second worst treatment. Most mornings I was still sick as I arrived at the hospital. 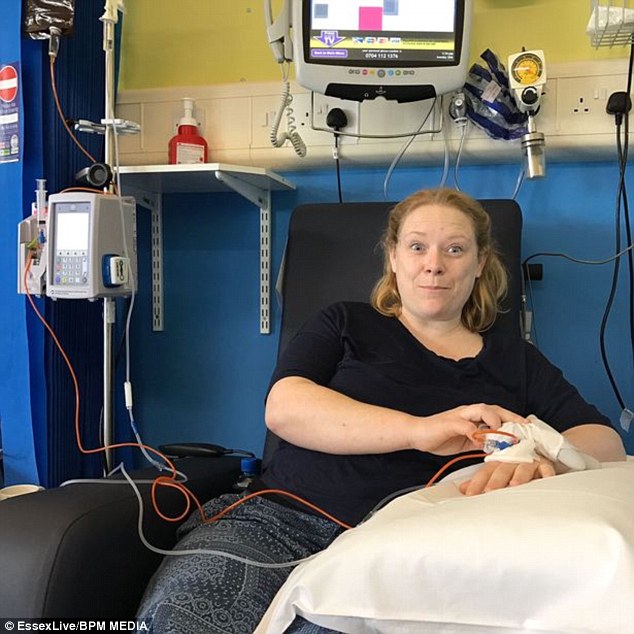 Ms Baldwin, a 35-year-old project manager, is battling the disease with her father, who also has terminal cancer. (pictured in hospital)

‘I had a central line in my chest because the drugs were too strong to go through my veins. A tube goes from your chest to the main vein that goes into your heart.’

Ms Baldwin had another scan this January, which showed the chemotherapy had had no effect on the cancer.

After the second treatment failed, Ms Baldwin was referred to University College Hospital Macmillan Cancer Centre in London for her third treatment.

They helped her get onto a trial comparing a new drug called pembrolizumab, to one currently used by the NHS called brentuximab.

Ms Baldwin said: ‘The new drug was showing particularly good results for my type of cancer, but unfortunately I was randomly placed to receive the drug that is already available.’

After two months Ms Baldwin had another scan to see if the drug had had any effect.

She said: ‘With the brentuximab I had mixed results. The cancer had cleared up in some areas, but had progressed in others.

‘This meant they believed the drug was no longer effective, so I was taken off the trial.

‘It’s their policy to take people off the trial when it looks like a drug isn’t working, but I can’t help but wonder if it would have helped if I had continued on the trial.’ 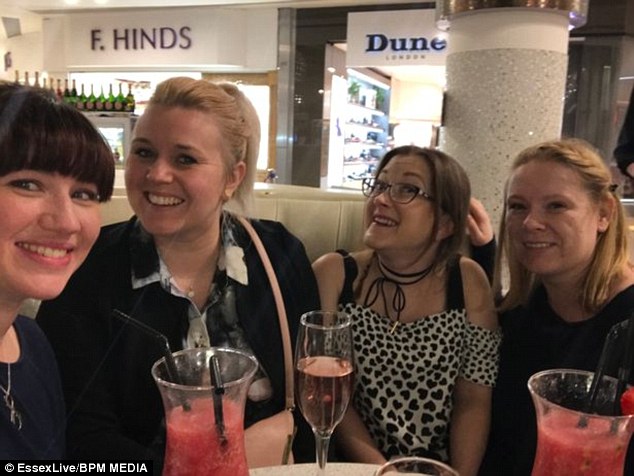 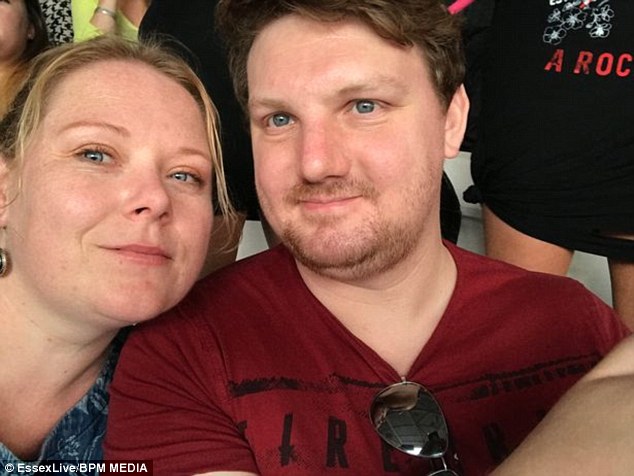 Speaking for the first time about her ordeal, she said: ‘I think the main symptom for me was an itch, but there was nothing to scratch (pictured with her partner Vince before her diagnosis)

Nivolumab is a form of immunotherapy that harnesses the immune system so it targets and destroys only cancer cells.

The late Sunday Times restaurant critic AA Gill, who died from lung cancer, was denied nivolumab before he passed away.

Watchdogs in England originally said the drug was too expensive – costing around £5,000 per month. But they have since made nivolumab, brand name Opdivo, available to other types of cancer, including Hodgkin lymphoma that does not respond to treatment.

Trials have shown the drug increases the number of patients still alive after three years of treatment by up to three-fold.

Ms Baldwin was then put on her fourth treatment, which she described as the worst yet.

She said: ‘This was probably the worst one, it was horrific. I was meant to be in hospital for six days, but I ended up in there for eight of nine days.

‘I was collapsing and having problems with my kidneys. I went home for two days, but then had to go back to hospital as I had contracted sepsis.

‘When you have chemotherapy your immune system is lowered, making you more vulnerable to infections.’

But a scan two weeks later showed the treatments made no impact and her cancer was now in her liver, abdomen and deep in her lungs.

She said: ‘It is horrible to know that you have gone through all that for no change. But at the time you don’t know, so you have to do it.’

Now running out of options, Ms Baldwin has been given a drug called bendamustine, but has been told by her doctor that this is unlikely to work.

Her only option is to raise £50,000 for nivolumab – which harnesses the immune system so it targets and destroys only cancer cells.

The late Sunday Times restaurant critic AA Gill was denied nivolumab before he passed away. Watchdogs originally said it was too expensive.

Trials have shown the drug increases the number of patients still alive after three years of treatment by up to three-fold.

She said: ‘Before they even put me on bendamustine, the doctor told me it was unlikely to work and that I needed to start fundraising.

‘The new drug is called nivolumab. They think I am chemo-resistant, but the new drug works differently to the ones I’ve had so far. 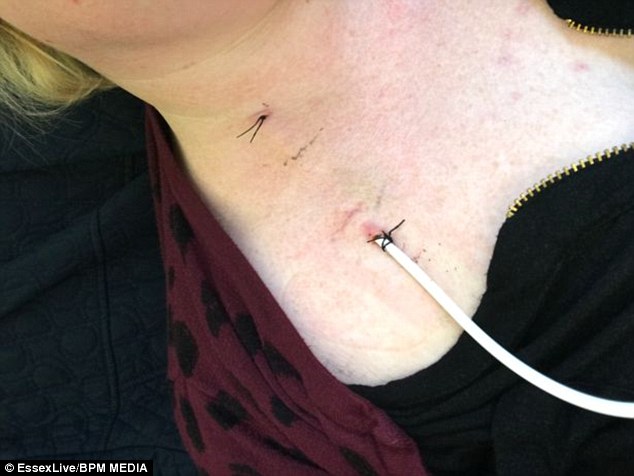 Her only option is to raise £50,000 for nivolumab – which harnesses the immune system so it targets and destroys only cancer cells

‘My consultant believes it could put my cancer in to remission, which would mean I could finally have a stem cell transplant.

‘However, because it is brand new it is too expensive and is not available on the NHS for Hodgkin lymphoma.’

She said: ‘The page is doing fantastically at the moment, but I still need to raise more for the treatment.

‘It took me a while to set up, because you don’t know how people will react.

‘People have started helping me fundraise, which is amazing. One of my friends is going to scale the Barclays’ building in London in September.’

Even though the fundraising is going well, Ms Baldwin needs to raise the rest of the money as quickly as she can.

She said: ‘The itch I had at the start is back, so I’m in no doubt that the cancer is there and thriving. The new drug is my only option.’

Despite her uncertain future and the impact the cancer has had on her, Ms Baldwin remains positive in her situation.

She said: ‘I don’t know any other way to be. I can’t imagine being at home feeling sorry for myself. I have got to live my life while I am here.

‘I don’t know how long I am going to be around. I just really want my normal boring life back, I would be so happy with that.

‘This makes you realise what is important and that is making memories with family and friends and that’s what I intend to do.’