Doctors have been stunned after struggling to find a woman’s contraceptive implant which has been stuck in her arm for two years after it was due to be removed.

Anneyy Madden got the implant fitted back in 2013 and was due to have it replaced in 2016.

Ms Madden, from Pontypridd, Wales, did not have any problems when the implant was fitted but difficulties arose when it came to removing the small plastic rod.

‘They’ve tried to remove it about four times but it’s still there.

‘I’ve been to the hospital, to a GP and to see a specialist but it’s still there and they can’t locate it.’

‘They have picked it up in an X-ray so they know it’s still there – but they can’t tell me where it is.

‘I have to have surgery now. They have to sedate me.’

She said that the series of attempts by medics to ‘dig it out’ has left her with scars and she now has to go under the knife as doctors try again to find and remove the rod – although she has still not been given a date.

The contraceptive rodis designed to be removed at any point but Ms Madden has had serious complications. 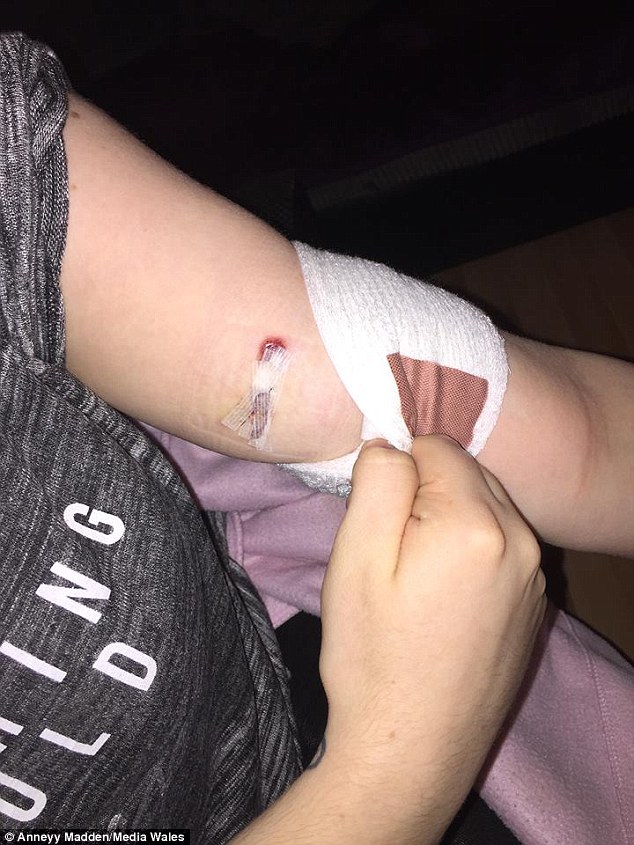 Experts have also warned her not to use any other form of contraception in case it affects the implant.

She said: ‘It’s been there for about two years now and they can’t tell me if it’s still working.

‘I did use the pill before I had the implant but it didn’t work with my body at all. The injection didn’t agree with me either.

‘It’s been there for over two years and it’s frustrating really.

‘I just don’t know what’s happening and I feel like I have no one to talk to. I just seem to be passed from person to person.’ Anneyy Madden with her partner Marcus

Anneyy added: ‘The scars are still there. I keep asking if it is working, or doing any damage, but they say they don’t know because it doesn’t usually happen.

‘I have been told it’s quite a rare thing to happen. But I would never advise anyone to get one after my experience.’

A spokeswoman for Cwm Taf University Health Board said: ‘We are unable to comment on an individual’s care and treatment.

‘We take all procedures including those in relation to the implant seriously and make sure that any individual who delivers these services has the correct level of training and follows the clinical guidelines.’

What is the contraceptive implant?

The contraceptive implant (Nexplanon) is a small flexible plastic rod that’s placed under the skin in your upper arm by a doctor or nurse.

It releases the hormone progestogen into your bloodstream to prevent pregnancy and lasts for 3 years.

The implant is more than 99% effective and can be useful for women who can’t use contraception that contains oestrogen.

The implant can be taken out if you have side effects.

When it’s first put in, you may feel some bruising, tenderness or swelling around the implant.

Your periods may become irregular, lighter, heavier or longer.