Valentine’s Day is a time to show people how much you love and appreciate them.

However for some their attempts at heart-felt gestures did not end too well, with one person leaving his partner less than impressed after gifting a bathroom scale.

Taking to social media, several enraged boyfriends also shared snaps of the wilted flowers they had received from retailers, complaining their day had been ruined.

Elsewhere several customers in the UK had to contend with receiving personalised cards with pictures of mystery couples on them.

One disgruntled girlfriend  shared a picture of the stranger’s card she received, and joked: ‘I’d like to apologise to the poor lass out there who has received a 29cm x 41cm picture of my face looking like a thumb’.

While a mother who made heart-shaped banana bread treats for her three children forgot about the snacks, causing them to be burnt to a crisp.

Brave choice! One person gifted their partner some Walgreens scales for Valentine’s Day which she cheekily shared on Instagram, writing: ‘Gentlemen … this is NOT, I repeat THIS IS NOT, an appropriate Valentine’s Day gift … you may actually end up in the hospital…’ 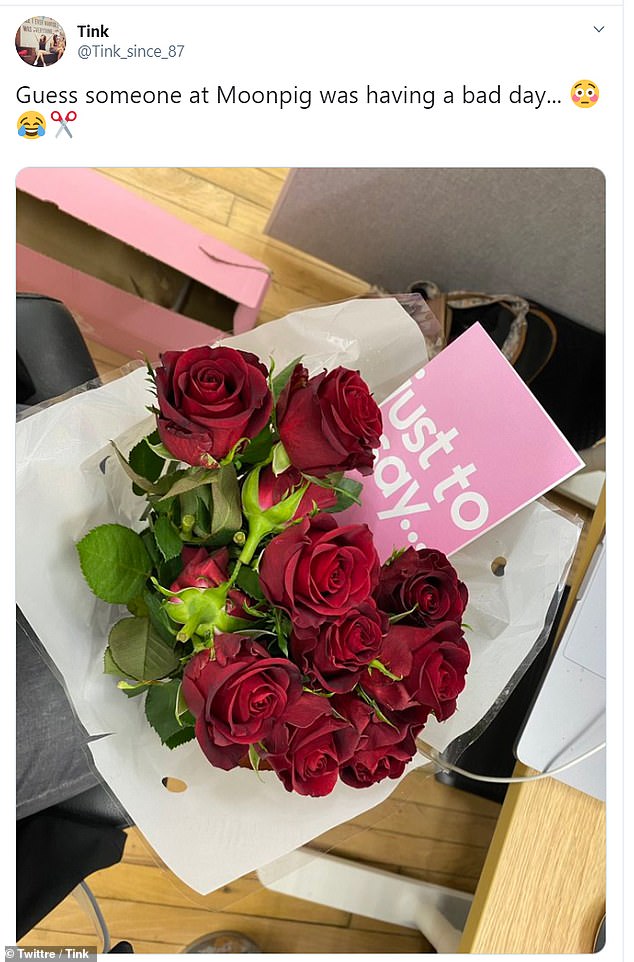 Oh dear! After receiving her bouquet of red roses as a Valentine’s Day treat, this Twitter user, from London, found two of the flowers had been cut and left to lay with the other pretty blooms 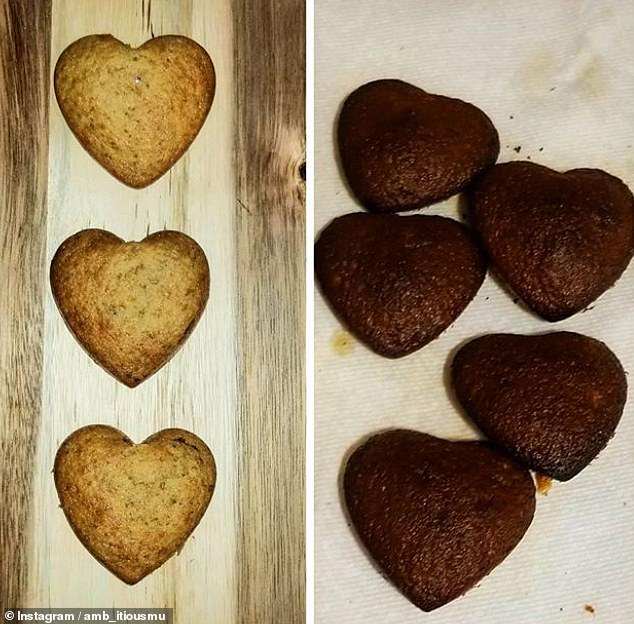 Good try! An American mother who baked heart-shaped banana bread treats for her three children ended up burning the snacks after she forgot to check the oven on Valentine’s Day 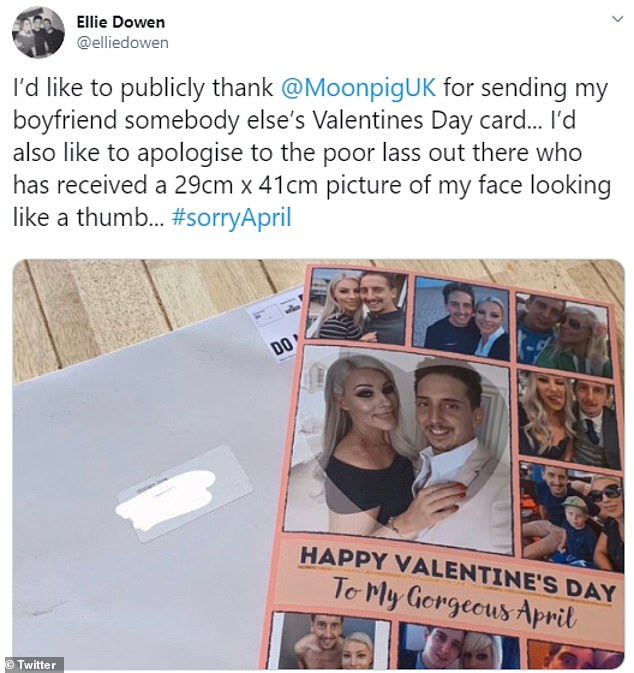 Whoops! Ellie Dowen shared a picture of a stranger’s card she received, joking: ‘I’d like to apologise to the poor lass out there who has received a 29cm x 41cm picture of my face looking like a thumb’ 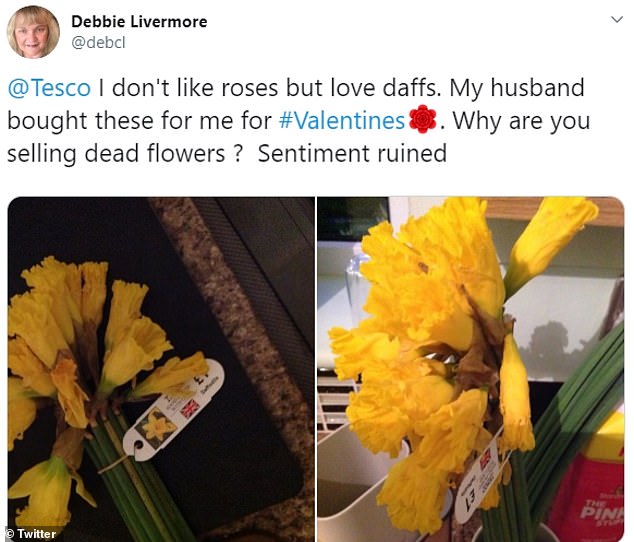 Not impressed: Meanwhile Twitter user Debbie Livermore was enraged to discover the daffodils her husband had bought her for the day of love had died, tweeting: ‘My husband bought these for me for Valentine’s. Why are you selling dead flowers? Sentiment ruined’ 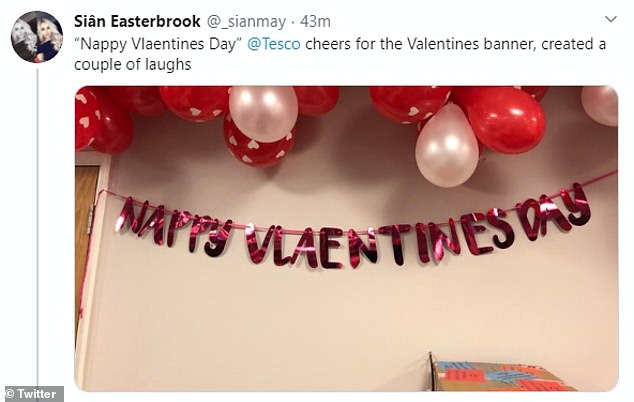 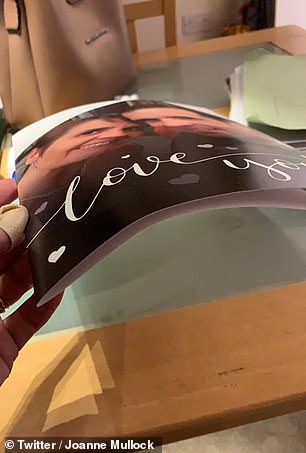 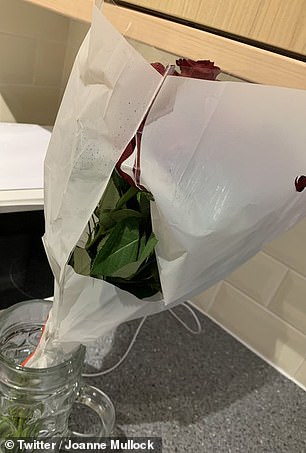 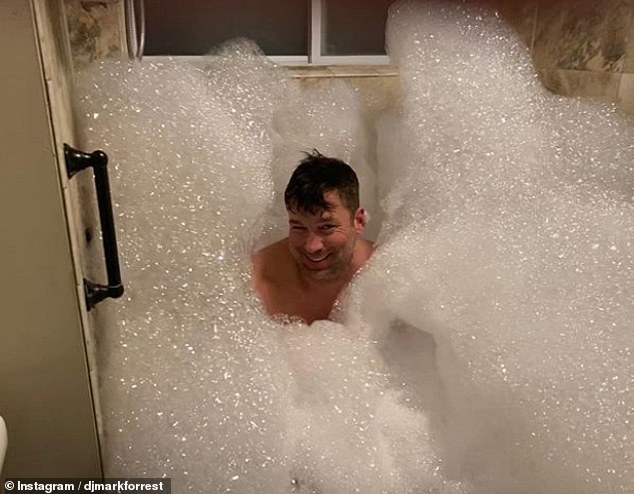 Taking it in his stride! DJ Mark joked to ‘never add too much vodka and never forget about the bubbles in the jet tub’ in a snap he captioned with Valentine’s Day Fail on Instagram 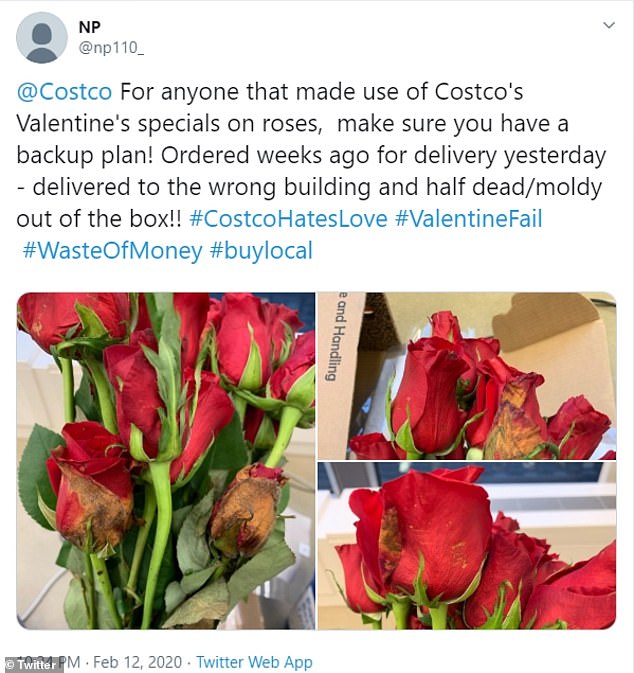 But other disappointed users took the matter less lightheartedly, with one writing: ‘For anyone that made use of the Valentine’s specials on roses, make sure you have a backup plan! Ordered weeks ago for delivery yesterday – delivered to the wrong building and half dead/ mouldy out of the box’, they wrote with a wilted picture

Katelyn Anderson, who lives in Hawaii, desperately tried to find somewhere for a romantic dinner but ended up in fast food chain Wendy’s when everywhere else had a two-hour wait

Not happy: This London-based husband was not impressed when the sweet gifts he had ordered for his wife did not arrive, despite them being told three different delivery time slots 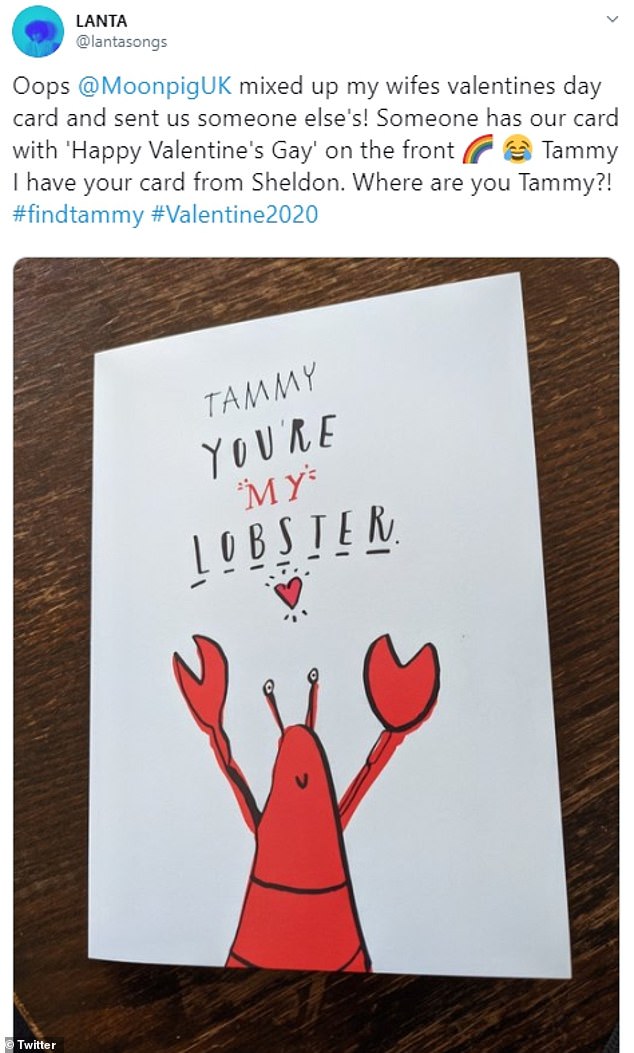 Seeing the funny side! Another bemused girlfriend also revealed he had received someone else’s Valentine’s Day card, giving a shout out to ‘Tammy’ whose card he received. She joked: ‘Someone has our card with Happy Valentine’s  Gay’ on the front 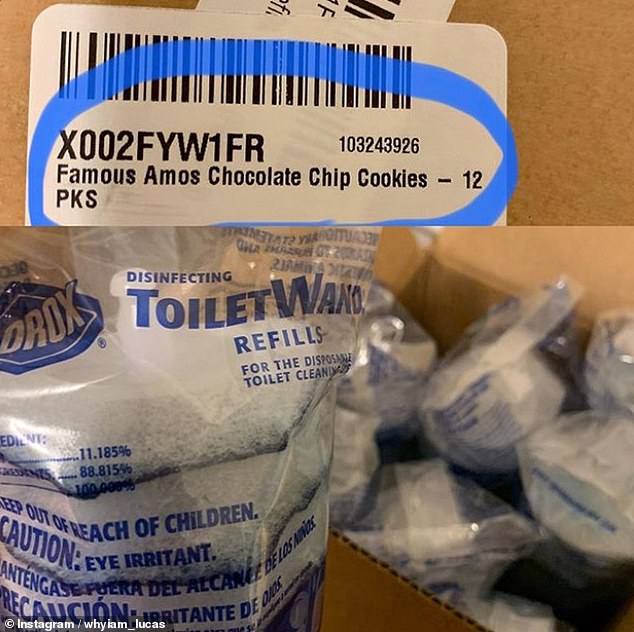 It’s the thought that counts! One person said their thoughtful pal tried to send them Famous Amos cookies but instead they received Clorox Toilet Wand Refills in the mail 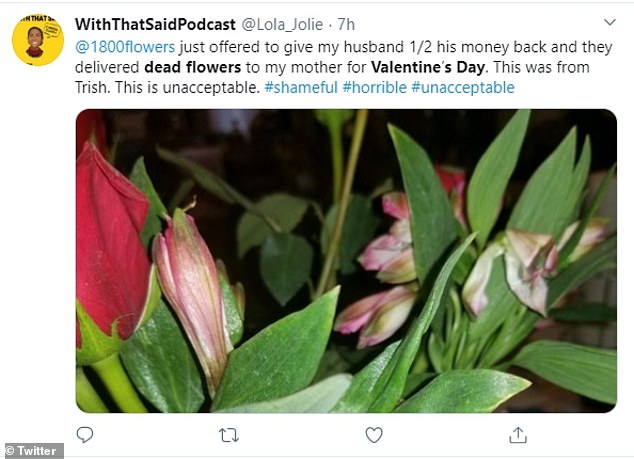 Elsewhere another furious romantic shared a picture of the wilted bunch of flowers she had received, and revealed her husband had only been offered half his money back – branding it ‘shameful’ Meanwhile to ensure there were no misunderstandings,  Twitter user Chelsea Kellers tracked down the owner of a card her confused friend received after ordering a personalised one herself,  tweeting: ‘I decided to track you down and take matters  into my own hands!’ 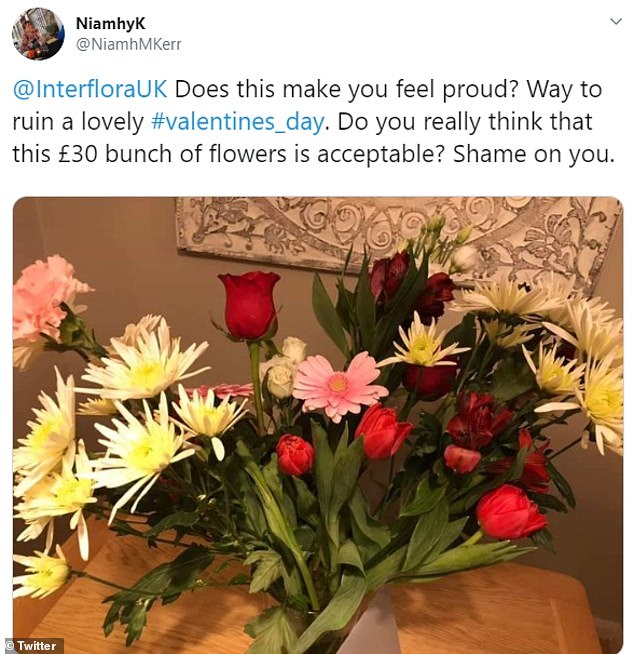 Twitter user Niamh Kerr shared a snap of the bunch of flowers she paid £30 for, saying they had ‘ruined’ Valentine’s Day and adding: ‘Shame on you!’ 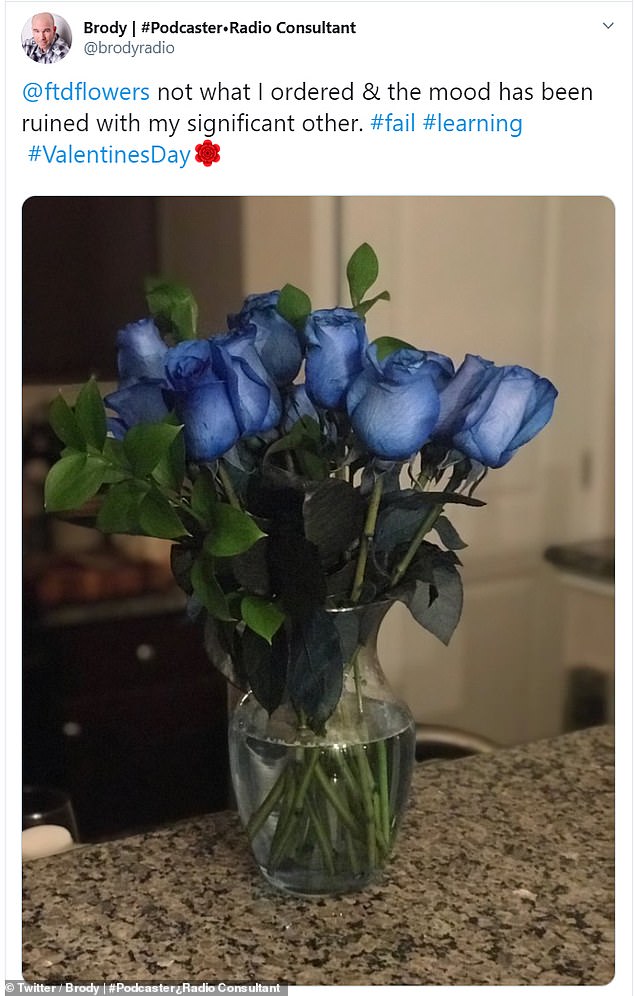 The colour of love? Brody, from LA, shared a snap of the blue roses which his significant other received … although they were not what he had ordered and ‘the mood was ruined’ 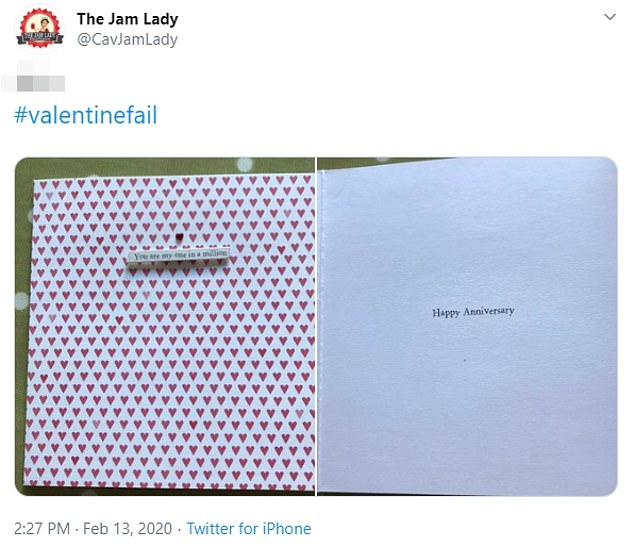 And a would-be-romantic was left disappointed when she realised that the Valentine’s card she had bought was in fact a ‘happy anniversary’ card, adding ‘Valentine’s fail!’ 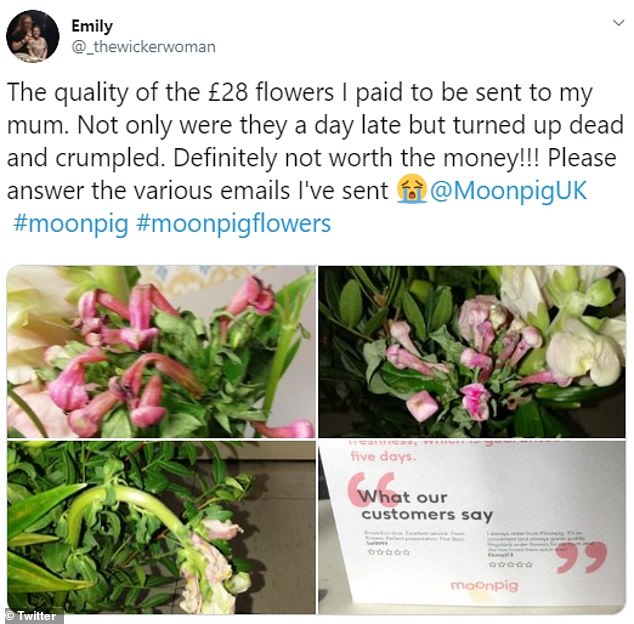 Elsewhere bemused daughter Emily was furious when the £28 flowers she bought her mother turned up a day late, dead and crumpled, sharing a picture of the dishevelled stems